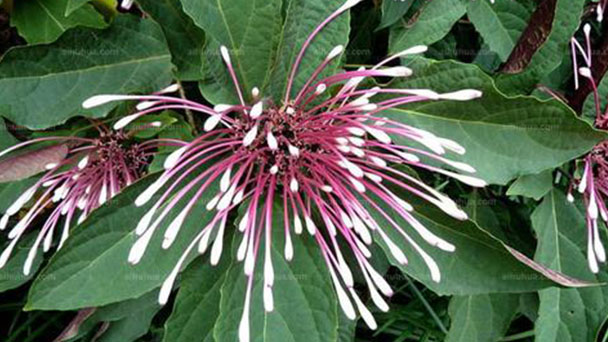 Starburst Plant, scientific name Clerodendrum quadriloculare, is a small shrub of the genus Verbena. In addition to the extremely high ornamental value, it also has the root of the liver qi and kidney essence, nourishing the stomach, and filling in, the effect such as blood and regulate the menstrual function, the attending of diseases is not easy. 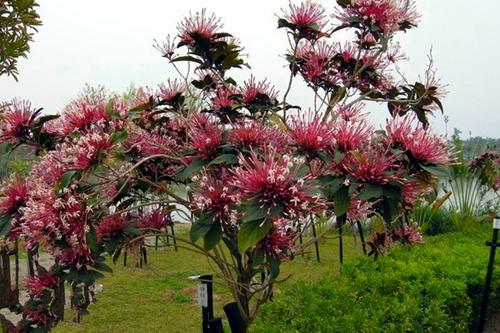 The flowers of Starburst Plant are terminal, with many florets, white and 5-lobed, curled into a semicircle. The fruit is oval.

Starburst Plant's plant height is about 50 cm. It has beautiful plant shapes, beautiful leaves, colorful flowers and dancing stamens. In the year of cultivation on the flowering, the flowering period as long as half a year.Leaf blade cordate to orbicular, opposite, dark green, margin serrate, slightly rough; Flower top health, long tube, gather scattered inflorescences dense, cones purple, front blow five white dazzling strip petals, like stars twinkling, like a group of fireworks; The flower buds of gold silk and silver Willow are in general, and the breeze is blowing and dancing. (Find more Climbing Plants with Flowers here.)

Starburst Plant originated in the Philippines and the Pacific Islands, but also sporadically distributed in China. 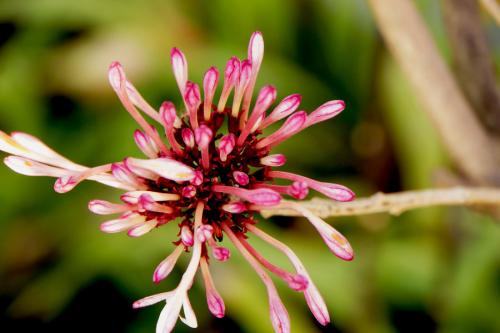 The flower shape of Starburst Plant is peculiar and very beautiful. It is an excellent tree species for landscaping. starburst plant also has medicinal value, and its root has the functions of soothing liver, regulating qi, nourishing kidney and strengthening essence, nourishing stomach, and regulating menstruation. The main treatment of liver qi is not comfortable, full abdominal swelling, menstrual irregularity and other diseases. Starburst Plant is a small shrub of the genus Verbena. It is native to Africa and the Pacific Islands, and also sporadically distributed in China. Starburst Plant has beautiful plant shape, beautiful leaves, colorful flowers and dancing stamens. In addition to its ornamental value, Starburst Plant has developed its medicinal value and nutritional and health care functions with the progress of science.

Starburst Plant has a strong vitality. It can be transplanted all the year round and survive. It can adapt to a wide range of soils in both north and south.

Starburst Plants are cultivated in the same year flowering, the appropriate temperature for growth is about 20-27℃. The flowering period is as long as half a year. Tell out of the stamens like gold silk silver willow general, a breeze blowing bounce dance, after the flower of the fruit colorful.

Prune the Starburst plant after flowering ends with clean pruning shears, cutting back branches to right outside the raised branch collar where they attach to other branches. Cut all rubbing, diseased or broken branches, and then move on to the branches that are growing outside of your desired shape. Unlike many other trees, you can remove 50 percent or more of the Starburst Plant's canopy without injuring it.

Pull out or mow small suckers as soon as they appear. The Starburst Plant (Clerodendrum quadriloculare) plant sends these up from underground rhizomes. If the sucker is too large to pull by hand, dig it out with a spade. This will keep the area around your tree looking clean. Alternatively, leave the suckers growing to make a foliage screen. Protect the Starburst Plant if there's a danger of frost by draping a blanket over the tree and staking the corners. Use poles to prop up the blanket so it does not touch the tree.

Divergent: Starburst Plant mainly propagates by tillers. One plant root can propagate 20-50 tillers in one year, and the tillers in the same year can blossom in the next year.

Sowing: The seeds of Starburst Plant can be slightly covered with vermiculite after sowing. The appropriate temperature for germination is about 18-24℃. After that, germination can take about 4-5 days and blossom after 5 months. 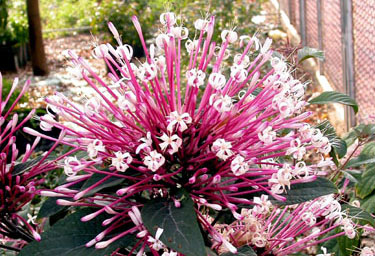 Read Next:
Top 20 Climbing Plants with Flowers for Your Garden