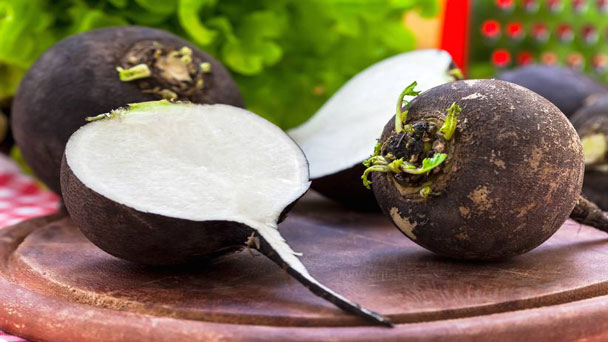 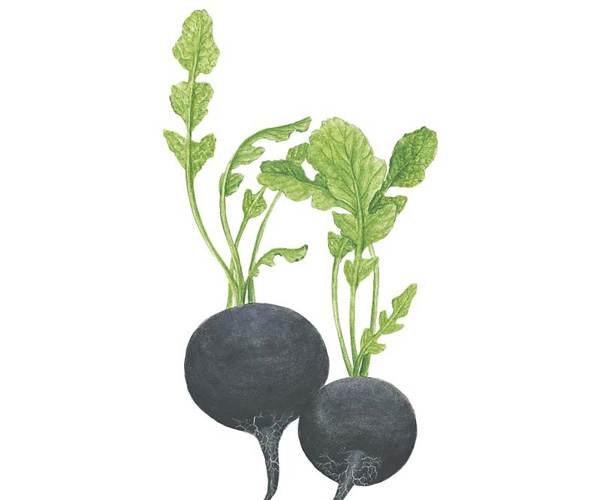 Spanish black radishes (Raphanus sativus) are heirloom radishes that are significantly more peppery than the rosy red radish. They also take about two to three times longer to mature than the common red radish. There are two varieties: a round one that looks much like a black turnip and a long one, which is cylindrical and can get to about 8 inches (20 cm.) long. The long variety is more pungent than the round but both have flesh that is crisp, white and peppery. To quell some of the spiciness, remove the black peel from the radishes.

Native to China, where wild forms can still be found today, spanish black radish was one of the first vegetables to be traded along the trade routes from Europe to Asia. Round Black Spanish is one of the oldest radishes in cultivation dating back to the 1400s in Europe and early 1800s in the US. 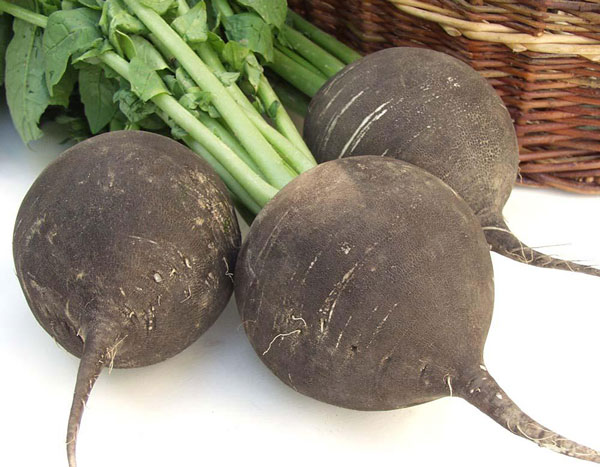 How to Grow & Care for Spanish Black Radish

How to Grow Spanish Black Radish

Spanish black radish Propagation with Seeds
Planting Spanish black radishes is easy and can be done directly in the ground all summer. Beautiful fresh turnips can be harvested quickly with just a little ground and/or soil mixture and regular watering. Spanish black radishes’ seeds are sown between May and September/October, depending on the climate.
Plant the seeds directly into the place where they will grow.
Leave a furrow ½ to 1 inch (2-3 cm) deep.
Sow regularly, planting about one seed every 1¼ to 1½ inches (3 to 4 cm).
Cover the furrows and do not press down the soil too much.
Regular watering, drizzle.
After the seeds germinate, thin them out. This means removing the weakest buds and keeping only the most vigorous ones, at intervals of six to eight inches (15 to 20 centimeters).
Remove weeds and make sure the ground is free of weeds.
Periodically break the surface gently with a small hoe to allow the water to reach the roots.
You can also choose to sow Spanish black radishes in Garden boxes, mix the soil and water them regularly. This will allow you to nibble delicious Spanish black radishes straight from your terrace or balcony. 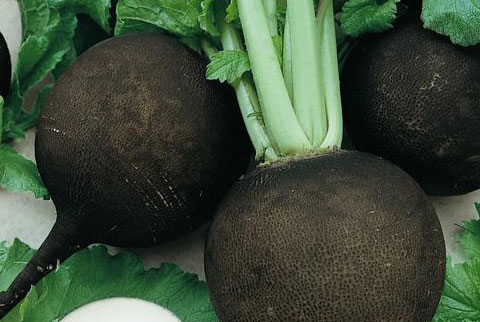 How to Care for Spanish Black Radish

Light Care
Spanish black radishes do need plenty of sun, so plant them where they can get six to eight hours of direct sunlight.
Soil Care
In addition, Spanish black radishes grow best in moist soil with a pH balance of 5.9 to 6.8.
Water Care
Keep the soil moist to ensure rapid growth of the Spanish black Radishes for meaty, tasty roots that won't divide. This can be tricky in hot, dry summer weather, so make sure you water your Spanish black Radishes regularly. Keep plants well watered, watering the soil not the leaves, particularly during dry spells and try to keep the weeds down avoid competition.
Temperature and Humidity Care
Optimal growing temperature for Spanish black radishes is between 18 and 24°C (65-75°F).
Space
Thinning shouldn't be necessary if you sow summer cultivars 2.5cm (1in) apart and winter cultivars 15cm (5in) apart. If thinning is required, do it as soon as possible. 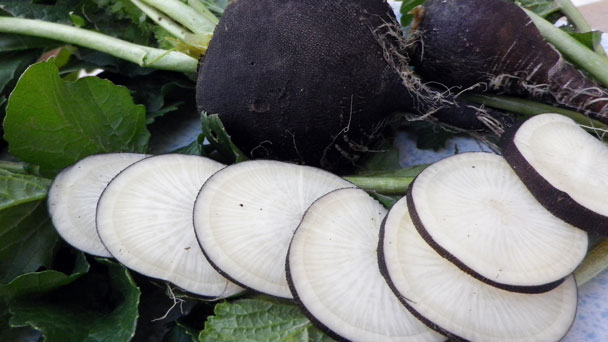 Spanish black Radishes can be eaten fresh, cut into salads or prepared in a variety of ways. Spanish black Radishes can be stir-fried, served as a side vegetable, cooked like a turnip, doused in butter or cream, cut into soups, sauteed with fries and stews, or sliced and dipped in appetizers. Traditionally, the Spanish black Radishes also had medicinal properties. For hundreds of years, people in China and Europe have used the root as a bile tonic and as a remedy for bile and digestive problems. In India, it's called Black Mooli, and it's used to treat liver problems. Today, the Spanish Black Radishes have been shown to fight infection and promote healthy digestion. Spanish Black Radishes also contain sulforaphane, which is beneficial for those who suffer from an overactive or underactive thyroid. The leaves are also said to have a liver detoxification effect. Roots are very high in vitamin C, as well as potassium, iron, magnesium and vitamins A, E and B. You can buy Herbs in capsule or tincture form at herbal supplement stores.

Here are some of the black radish varieties to look for:
Round Black Spanish. In French they are called Noir Gros Rond D’hiver. A large radish that has been grown at least since the 1500’s, the Round Black Spanish may grow to five inches across. The almost nutty flesh may be eaten raw or cooked. The thin skin makes for dramatically colored round slices. Days to maturity: about 55.
Long Black Spanish, or, in French, Noir Gros Long D’Hiver. Growing to an impressive nine inches long, this slender heirloom radish can be sown all the way into mid-autumn.The flesh packs some firepower.
Round Black. A close relative to the Spanish black radishes, this American heirloom matures in about 35 days, so can be sown in early fall for quick harvest and subsequent storage. Grows to about four inches in diameter.
Nero Tondo. Another black radish close to the Spanish black, this variation seems to resist hot-weather bolting better than any other. So if your weather heats up quickly in late spring, the Nero Tondo may be the best choice for consistent texture and flavor. Maturity in 50 days and can be considered a summer black radish.
Russian Black. Native to the some of the coldest growing conditions imaginable, the Russian heirloom black radish can germinate at close to freezing soil temperatures and forms round mature roots in quite cold soil. In warmer zones, try sowing in fall and harvesting in spring. 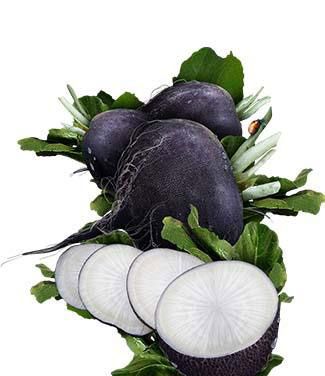 Though Spanish black radishes are relatively trouble free, particularly when they’re grown in colder weather when pest activity is generally low, there are a few usual culprits to watch out for.
Flea Beetle
Flea beetles are common but damage is not usually fatal.
Flea beetles – Flea beetles feed on the leaves of all brassicas. Small holes in the leaves are the tell-tale sign. They tend to go for younger plants so transplanting from indoors is a good way to avoid them.
Slugs – Slugs can still be active even when it’s cold so keep an eye out for them.
Cutworms – Cutworms, which are the larvae of moths, are awful little blighters. Protect the base of the stem by surrounding it with a plastic plant pot with the bottom cut out.
Aphids – Aphids can also be a problem for radishes so keep an eye out for them. They’re very easy to spot on the undersides of leaves. 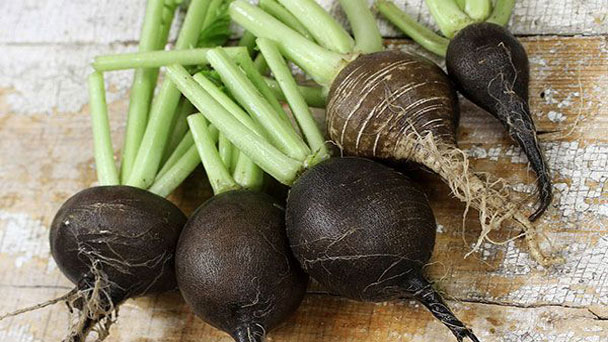 Plant Spanish black radishes near beans, beets, celeriac, chervil, cucumber, lettuce, mint, parsnip, peas, spinach, squash, and tomatoes. Avoid planting near Agastache or potatoes. It is said that planting 3 or 4 icicle radishes around the mound where you plant squash, and allowing them to grow and bloom, will prevent most pests of squash and cucumber.