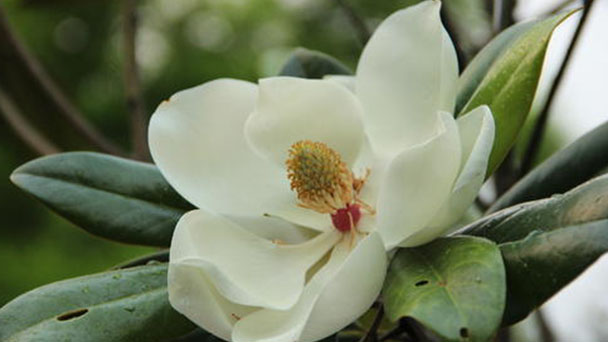 Southern Magnolia is native to southeastern North America. It is cultivated in cities south of Yangtze River valley in China. Lanzhou and Beijing parks are also cultivated. The species is widely cultivated with over 150 cultivars. Flowers of Southern Magnolia are big, white, like lotus, fragrant, for the beautiful garden greening ornamental tree species, suitable for moist and fertile soil, sulfur dioxide, chlorine gas, hydrogen fluoride and other toxic gas resistance is strong; It is also resistant to smoke and dust. Wood yellow and white, material is strong, Southern Magnolia can be used for decoration material. Aromatic oils can be extracted from leaves, young shoots and flowers. For making flower extracts. Leaves are used in medicine to treat hypertension. 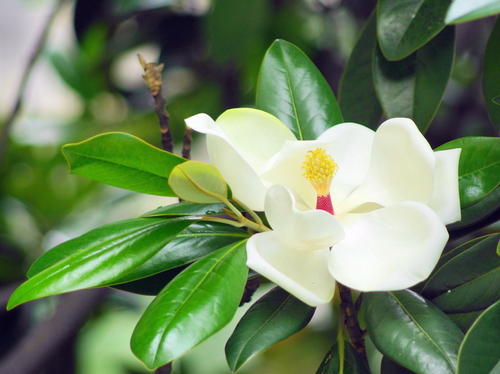 Ecological habits of the Southern Magnolia

Southern Magnolia likes warm and humid climate, pollution resistance, not alkali - resistant soil. The seedling stage is quite tolerant of shade. They like warm and humid climates. Harder to cold, can withstand short -19 degrees low temperature. Southern Magnolia grows well in rich, deep, moist and well drained acidic or neutral soils. Roots deep and wide, quite wind - resistant. Fewer pests and diseases. The growth rate is medium, the seedling growth is slow, the growth is gradually accelerated after 10 years.

The propagation of Southern Magnolia

In the middle of autumn, the fruits of Southern Magnolia were picked and placed in a ventilated place, and the fruits were gradually cracked, the seeds were taken out, soaked in water, the red fleshy film attached to the seed coat was rubbed off, the oil on the seed coat was washed with soda water, and then rinsed with clean water. The sand was dried and stored in the wooden box in the ventilated place, and the seeds were sown in the open field in the middle and late winter of the next year. Seedbed should be selected without diseases and pests of the new ground, with deep soil layer of yellow wood or sandy loam is appropriate, set a high bed, row drill, base fertilizer can be fully decayed human excrement and urine, dry cake, in the whole bed before turning into the soil.

We must not use garbage as a base fertilizer, so as not to bring disease, bacteria. 30 centimeters apart in order to fire, soil and loess with bran dust cover, the thickness of 3 times the diameter of the seed, the straw covering insulation moisturizing, seedling was unearthed in late spring to continuous broadcasting with crystal between the tender grass, silkworm poisoning, even four or five times, each time every 2-3, in early may can set charmilles, 40% light transmittance, mid to late autumn to dismantle, shading material available Chinese fir, bamboo curtain, etc., such as bamboo shade can peel at any time as the ideal, to choose appropriate, good drainage and young plants are generally not severe diseases and insect pests, seedling quick nitrogen topdressing 3-4 times, annual seedling 30 to 40 cm tall.You can transplant in autumn of that year.

In the case of lack of provenance and stock, the method of Southern Magnolia laying is an important means of reproduction, especially to make full use of the mother plant and give full play to the productive potential. Although the procedure is troublesome, it can solve some problems, so it has practical value. Parent with a young tree or nursery went for the best, because the collateral growth robust, strong life force, hair root easily, without affecting the tree, under the principle of choose 2 to 3 years of full thick, up for collateral, middle of spring, on the base of above 10 to 15 centimeters girdling, 3 cm long, the wound after peeling rough objects such as small Manila cambium of the peel residues on the xylem, again with plastic film cultivation soil package to the wound.

Culture soil is usually selected to keep strong water, texture by loose, not with diseases and insects is appropriate, generally take 60% yellow mud mixed rice chaff ash 40% or with vermiculite, expanded perlite, or with fully decolorized cotton seeds, textile scraps, mushroom bed soil, water content should be appropriate, with the hand when water extrusion is the degree.In order to make the wound healing fast, early root, the upper part of the wound can be coated with five thousand naphthalene acetic acid solution, slightly dry and then wrapped culture soil.

The scion is 4-5 cm long and leaves are not left. The key points of operation are the same as that of general deciduous plants. The key to survival is that the scion should be sealed with a bud hole and wrapped up.In daily management, attention should be paid to wipe off the anvil buds at any time, and the wound binding film should not be removed in a hurry after survival. Fertilizer cultivation method, annual growth can reach more than 1 meter. In addition to cutting in early spring, bud grafting can also be used for reproduction, in autumn, the following spring cutting and pasting. Southern Magnolia is most suitable for deep soil, well drained, slightly acidic loess or sandy loam soil, in the central and Southern region is usually open cultivation.

Because Southern Magnolia developed a root group, Southern Magnolia is easy to transplant and survive. However, in order to ensure the quality of the project, no matter the seedling is large, it is necessary to take the soil ball properly when transplanting, but also because of its luxe leaves, large leaves, newly planted seedlings moisture transpiration is large, vulnerable to wind damage, so the transplanting should be immediately shearing the leaves, such as loose soil ball or ball is too small, the root system damage is heavy, should also be sparse to part of the twigs or redundant branches. Such branches are most likely to be burned by the hot sun, causing serious damage to the bark. Regardless of the large trees, young trees, newly planted trees or forest trees, if the branches are exposed to the hot sun in summer, they should be wrapped with straw rope or coated with lime emulsion as soon as possible to avoid irremediable damage. The Southern Magnolia is well-branched and well-shaped, and lets itself grow naturally without much pruning;If the purple magnolia as the rootstock of grafted seedlings, often from the root neck germination anvil bud, should pay attention to remove in time. The diseases and insect pests of Southern Magnolia are very few. In spring, attention should be paid to the prevention and control of leaf rolling moth to damage tender buds, tender leaves and flower buds. It can spray 1000 times 98% crystal tryptrite twice or three times. 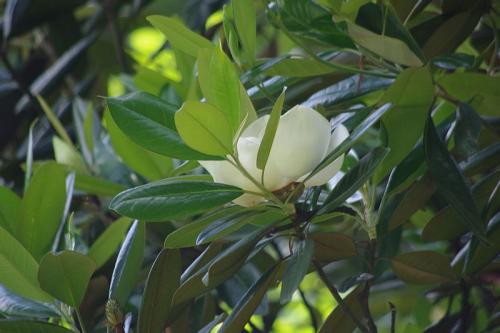 Early spring is the best season for Southern Magnolia tree transplanting, but the plum rain season is the best. About half a month after the Spring Festival, when Southern Magnolia is still dormant, with slow SAP flow and slow metabolism, it is time to transplant. After transplantation, when the spring temperature rose in the evening, the root system first sprouted, grew and repaired. Combined with careful management, the growth of Southern Magnolia in that year would not be affected basically. In addition, in the plum rain season, the rainfall was large and the air humidity was high, so the survival rate of Southern Magnolia transplanted at this time was very high. However, it is best to pay attention to the transplantation in cloudy or cloudy weather, try to avoid heavy rain or high temperature weather.

By pruning and plucking leaves, water evaporation can be reduced and water supply pressure from injured roots can be alleviated. Pruning should remove inner bore branches, overlapping branches and diseased insect branches, and strive to maintain the integrity of the tree form; Picking leaves to pick light branches of 1/3 of the amount of leaf is appropriate, otherwise it will reduce the transpiration pull, causing the root water absorption difficulties.

After the Southern Magnolia tree is transplanted, the tree is wrapped in a straw rope about 2 meters to reduce evaporation, and the rope can be sprayed with water to create a small humid environment during drought. After planting, support wood should be set to fix the trunk to prevent shaking and damage the root system. Piling cannot have fixed effect commonly, can choose long 3 meters to 4 meters bamboo or the tripod that other material makes is fixed. If the weather is dry after transplantation, spray on the tree canopy or high altitude spray to reduce the temperature of Southern Magnolia leaves.

The role of Southern Magnolia

Southern Magnolia flowers are big, white, like lotus, fragrant, for the beautiful garden greening ornamental tree species, suitable for moist and fertile soil, sulfur dioxide, chlorine gas, hydrogen fluoride and other toxic gas resistance is strong; Southern Magnolia is also resistant to smoke and dust. Wood yellow and white, material is strong, and Southern Magnolia can be used for decoration material. Aromatic oils can be extracted from leaves, young shoots and flowers. For making flower extracts.Leaves are used in medicine to treat hypertension.Seed oil, oil content of 42.5%.

Southern Magnolia can be used as a garden, street tree, or court shade tree. The Southern Magnolia trees are magnificent in appearance, with large leaves and thick shade, and the flowers are lotus-like and fragrant.It is a beautiful ornamental tree for landscaping. It is advisable to plant Southern Magnolia alone, in clusters or in rows. Southern Magnolia is also resistant to smoke and wind, and has strong resistance to toxic gases such as sulfur dioxide, so it is also a good tree for air purification and environmental protection. 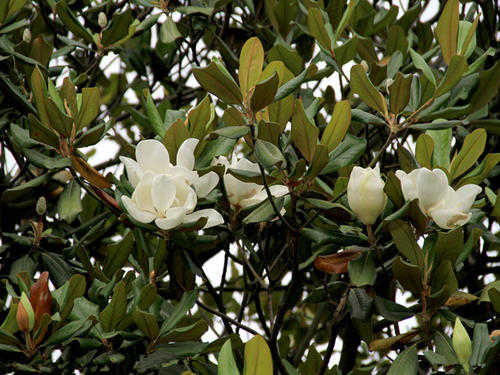 How to propagate Southern Magnolia