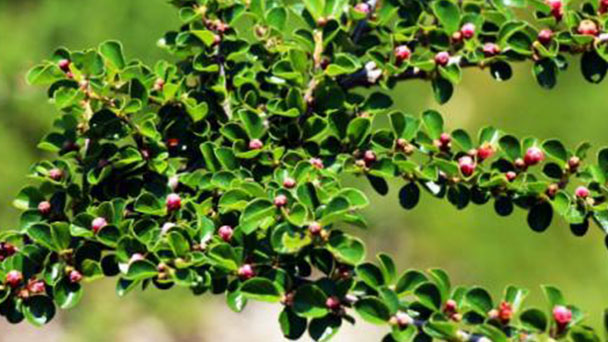 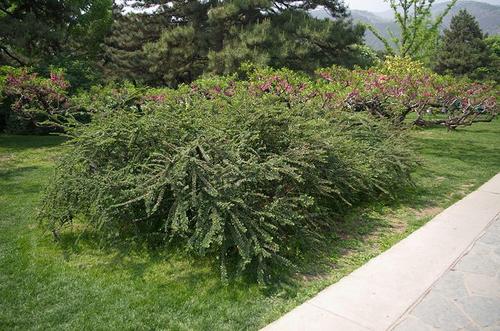 Rock cotoneaster is a deciduous or semi-evergreen creeping shrub, not more than 0.5 m high, branches horizontal open into neat two rows; Branchlets are cylindrical, strigose outside when young, glabrescent when old, blackish brown.

Rock cotoneaster like warm and humid semi-shady environment, dry and barren land, not resistant to heat and humidity, a certain cold resistance, afraid of water.

How to grow and care for rock cotoneaster

Rock cotoneaster likes a wet or semi-dry climate environment, the relative temperature of the air in the growth environment is required to be 50-70%, the relative humidity of the air is too low at the lower part of the leaves yellowing, falling off, the upper leaves dull.

Because Rock cotoneaster is native to subtropical regions, it is very strict in winter temperature and stops growing when the ambient temperature is below 8℃.

For potted rock cotoneaster, in addition to adding organic fertilizer on the pot, in the usual maintenance process, but also to carry out appropriate fertilizer and water management. During the dormant period in winter, it is mainly to control fertilizer and water, and the interval period is about 3-7 days. The interval period is shorter during sunny days or high temperatures, and the interval period is longer during rainy days or low temperatures or not to be watered. For plants planted in spring and summer, according to the drought, apply 2-4 times of fertilizer water: first in the root neck outside 30-100 cm open a circle of the small ditch (the bigger the plant, the farther from the root neck), ditch width and depth are 20 cm. Sprinkle 25-50 kg of organic fertilizer, or 1-5 particles of compound fertilizer (chemical fertilizer) into the ditch, and then pour on permeable water. After winter and before spring, apply fertilizer again according to the above method, but do not water.

Rock cotoneaster enters dormant or half dormant period in winter, want thin, disease insect, dead, too close wait for a branch to cut off. It can also be combined with cuttings to finish the branches.

As long as rock cotoneaster is properly maintained, it will grow very fast. When it reaches a certain size, it is necessary to consider changing it to a larger pot to allow it to continue to thrive. The proportion of culture soil and components for changing pots can be one of the following: garden soil: slag =3:1; Or garden soil: medium river sand: sawdust (residue) =4:1:2; Or paddy soil, pond mud, leaf rot soil in one of the.

Put the pots of flowers on the ground and you want to change with slap dab around the basin, isolating the root trembled and the basin and wall, flower pot upside down on the left hand, left-hand index finger and middle finger gently clamp plant, resist basin along the wrist and fingers, right hand slapping your pelvic floor, then use your thumb from the top-down, bottom hole take root-soil to plants come out. When removed, pat the soil gently with your rock cotoneaster to remove excess soil.

Choose a flowerpot of appropriate size, the bottom hole of the basin is covered with two tiles or thin foam pieces, to ensure that the soil is not washed out by the water, but also to make the excess water can flow out in time. A layer of ceramsite or broken red brick is placed on top of the tile or foam to act as a filter layer, about 2-3 cm thick. Drainage layer and then put a fertilizer machine fertilizer, about 1-3 cm thick, fertilizer on a thin layer of substrate, about 2 cm thick, in order to separate the root system and fertilizer, finally put the plant in, fill nutrient soil, from the mouth of about 2-3 cm can be left. 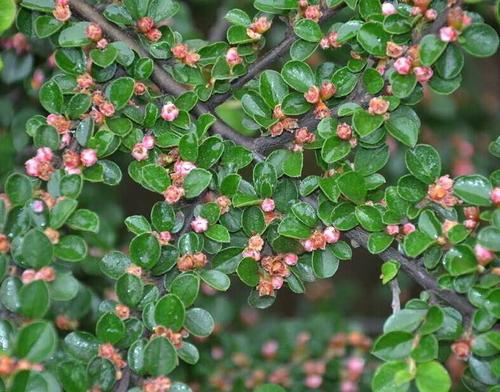 The propagation methods of rock cotoneaster

Sow seeds in autumn or wet sand in spring. Fresh seeds of rock cotoneaster can be sown immediately after harvest, dry seeds should be sown in early spring from January to February. Transplanting should be carried out in early spring, and large seedlings need to bring soil balls.

A slotting bed with a width of 2.0m, a length of 10m and a height of 40cm were made in preparation. The bottom of the slotting bed was covered with a layer of sweet potato stone with a thickness of 20cm, and the upper bed was covered with a layer of fresh river sand or vermiculite and perlite with a thickness of 20cm as the cutting substrate. 0.3% carbendazim solution or 0.3% potassium permanganate solution was used for substrate disinfection. Then buckle the vaulted shed, cover the plastic film, and set up the shading net. Watering to keep the cutting substrate moist.

Rock Cotoneaster is distributed in Shaanxi, Gansu, Hubei, Hunan, Sichuan, Guizhou and Yunnan provinces of China. On shrubs and rocky slopes at altitudes of 2000-3500 m.

The main ornamental value of Rock Cotoneaster is the red leaves in late autumn. Rock cotoneaster's leaves turn red in late autumn. Because Rock Cotoneaster is low and looks like a ball of fire from a distance, it is very bright. In the late autumn of each year, there are often photographers in the botanical garden attracted by its bright red leaves, become a surprise find, take pictures of it. The flowers and fruits of Rock Cotoneaster are also of ornamental value. Its pink blossoms are silent among the greens, for it blooms in early summer. The contrast of pink flowers and green leaves is particularly gorgeous. The fruit of Rock Cotoneaster is a small red ball, which does not fall in the winter. It is interesting to watch on snow days. In fact, Rock cotoneaster is a very good garden plant, especially in the garden, accompanied by rockery and stacked rocks, dotted by lawns and streams, setting off each other, the landscape is beautiful. Rock cotoneaster's twigs are parallel layers, so the tree shape is also beautiful. 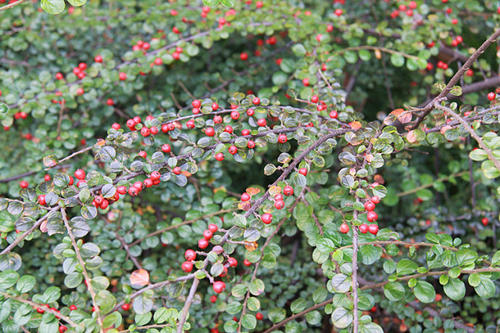