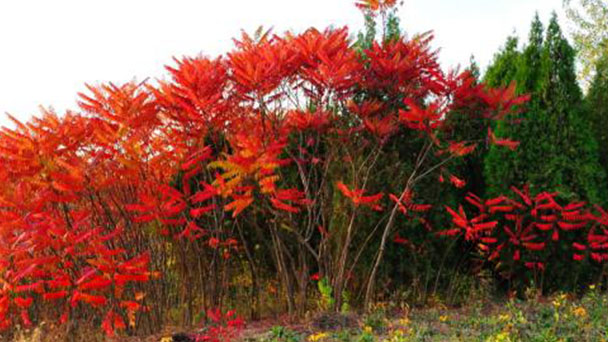 Rhus Typhina (staghorn sumac) is a deciduous small tree belonging to the family of lacquer. Rhus Typhina presents three colors each year: white flowers in spring, green leaves and fruits in summer, and red fruits in autumn and winter. It is a beautiful landscape plant. General tree height is less than 1 meters, tangled roots, bark through black, Canggu form. The leaves of Rhus Typhina are luxurant and fluffy on the surface, which can absorb a lot of floating dust and harmful substances in the atmosphere. Cattle and sheep do not eat its leaves and are not harmed by diseases and insects. Rhus Typhina is not only resistant to drought, salt and alkali, barren, easy to reproduce, but also has high ornamental and practical value, and is often used as garden trees, flowers, Chinese herbal medicine, etc. 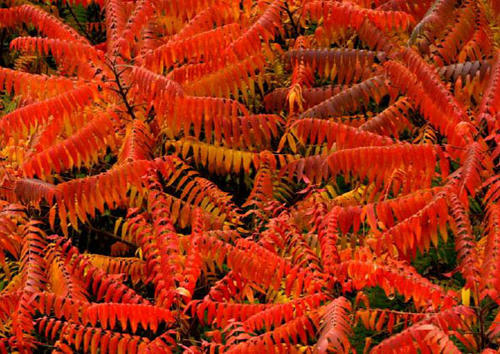 Rhus Typhina likes light, is cold resistant, has strong adaptability to the soil, is drought resistant, is barren, is resistant to water and moisture, is resistant to salt and alkali. The root system is well developed and the tillering ability is strong. In four years, 30~50 tillering plants can sprout.Shallow root, fast growth, short life.

Rhus Typhina matures at an early stage. Generally, it can blossom and bear fruit after 4 years, lasting for about 30 years. It is a positive species with extremely strong adaptability.

Rhus Typhina is warm and cold resistant, acid and alkali resistant. Its growth rate is very fast, and can be a year into the forest.

Rhus Typhina is native to North America and often grows on open sandy or gravel soil. It was introduced by the Institute of Botany of the Chinese Academy of Sciences in 1959, and has been popularized to all provinces and regions in China since 1974. To the north of the Yellow River basin provinces (regions) cultivation is more, mainly used for greening barren hills and salt alkali wasteland landscape forest tree species.

How to Propagate Rhus Typhina

Rhus Typhina seeds are small, the seed coat is hard, its outside is covered with red needle hairs. Before sowing, rub with lye water to remove the red hairs and wax on the seed coat. Then soak in 85℃ hot water for 5 minutes, remove and bury the wet sand, place in the room at 20℃ for germination, and sprinkle the right amount of water according to the evaporation of water. The seeds of Rhus Typhina (staghorn sumac) can be sown when the buds come out in 20 days. Sowing amounts of 7 to 10 catties per acre, row spacing 35 cm. Scatter the seeds into the trench 2 centimeters deep, and then cover the fine soil, make a small ridge, in order to conserve soil moisture. Spray water properly to keep the soil moist.It will be almost all out in 20 days.That year seedling height 80 cm, ground diameter 1 to 1.5 cm.

Many tillers often sprout around Rhus Typhina which is more than two years old. It can be selected and retained according to row spacing. Attention should be paid to pruning the roots and tillers and excessive lateral branches to cultivate the strong seedlings with good tree shape. The height of the seedlings can reach 1.5 to 2 meters. The second year after breeding can be transplanted in the middle of March. Plant row spacing should be 50×40 cm, watering, soil loosening and weeding should be done well, topdressing should be done once between May and June, and water and fertilizer should be stopped before the end of July. Rhus Typhina is generally free of disease. Seedling and root-transplanting seedlings 3 years, root tillering seedlings 2 years diameter of 3 to 5 cm, for afforestation. 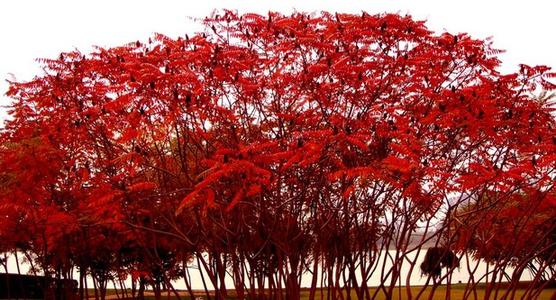 How to Care for Rhus Typhina

Water Rhus Typhina every 10 days in the seedling stage to ensure the water needed for growth. After the natural growth process can be changed to apply water every half a month, pay attention not to form water, otherwise it will rot the root system. Cold weather in winter can damage the branches and leaves of Rhus Typhina, so stop watering at the end of July to avoid damage in the cold winter.

Rhus Typhina is relatively resistant to infertility and does not require very high fertilizer, so frequent fertilization is not necessary, otherwise it will make Rhus Typhina grow too fast and crowd out other plants. Generally in the growing season, urea 1~2 times can be applied. The time of fertilization is in the morning or evening. Pay attention to watering and dilution every once in a while to promote nutrient absorption.

Trees need the sun's rays to grow, and Rhus Typhina loves light and should be planted in a well-lit area.If they don't get enough light, they won't grow well or even survive. The summer temperature is too high, but also to do a good job of shading treatment, long-term exposure to the sun will burn saplings, so that leaves dry and lose luster.

Rhus Typhina is highly adaptable, generally in the river, swamps, stone piles can survive, so do not pick the growth of the soil, it can survive in the wasteland. If you want it to grow well, you can choose to plant Rhus Typhina in porous loam soil with strong drainage, which is very beneficial for its growth.

Rhus Typhina is particularly fertile, and if left untreated, it may crowd out other plants of the same species and become overrun. Therefore, the general pruning of the need to be next to the trunk of the lateral branches all removed. Autumn also to its trunk for short, the next spring to leave a strong trunk as the trunk extension branch, to ensure normal growth.

Rhus Typhina is adapted to harsh site conditions.It can not only grow in fertile soil, but also survive in yellow clay and pebble soil. It can not only grow in poor soil, but also grow in construction waste and coal slag waste with drought and water shortage. Rhus Typhina (staghorn sumac) has strong drought tolerance and cold resistance. And so far, no widespread disease has been found on Rhus Typhina. Rhus Typhina has strong root germination ability, fast natural reproduction ability, high survival rate of afforestation, and can regain new life with tenacious vitality after man-made destruction and forest fire. At the same time, it has the ability to withstand cold, drought and salt and alkali, and has a strong adaptability to the surrounding environment. It is a kind of pioneer forestation tree for slope protection, fire prevention, bank fixing and beach sealing, sand fixing and soil preservation. Because Rhus Typhina has many uses, wide adaptability and good ornamental value, it has been introduced and cultivated for many countries early, and is widely used in plantation construction, restoration of degraded land and landscape construction.

Both female inflorescences and fruit inflorescences of Rhus Typhina (staghorn sumac) have bright bark and leaves containing tannin, which is the raw material for making tannic acid. The fruit contains citric acid and vitamin C, which can be used as a beverage. Seeds containing oil wax, used to make soap and candles; Yellow wood, compact texture and beautiful, can be carved, spinning handicrafts; The root bark is used medicinally. Rhus Typhina, with high tannin content, is an excellent raw material for the production of tannin extracts. Moreover, this tannin extract is a mixed tannin extract and has a wide range of applications.Its roots, leaves, flowers, bark, seeds, wood have a very wide range of uses. Rhus Typhina can not be used as an excellent fuelwood tree because of its fast growth, high moisture content of branches and less oil, which is not easy to be burned.

Rhus Typhina shallow root system distribution, the distribution of the more commonly in 10 ~ 50 cm soil layer, the level of the root distribution, up to 2.0 meters, 1 year to take root and root rice germination ability is extremely strong, densely on the adventitious bud, can look for void initiation root rice seedlings, fast growth, early closure, born three years Rhus Typhina, the rainfall interception by canopy was 11.3% ~ 25.5%, 85.7% less than in control surface runoff, soil ChongShuaLiang reduced by 91.8%.With simple planting methods and high survival rate, it is the pioneer tree for afforestation of barren hills, slope protection of banks, embankment and beach sealing, sand fixation and other difficult sites, and it is also the first choice tree for afforestation in arid and semi-arid areas of central and western China.

Rhus Typhina is named because of its beautiful appearance and its spikes are similar to torches. Especially in the late autumn season, its golden red leaves, distant view is very spectacular, no leaves and flowers are moving, so it has a higher ornamental value. Rhus Typhina can be used as the scenic tree species for greening on both sides of urban roads, factories, residential areas, schools, reservoirs and tourist destinations, and is one of the excellent trees for beautifying the environment and greening barren hills.

Rhus Typhina is one of the excellent fuelwood species with fast growth. High fuelwood quantity can be obtained by shrub management. 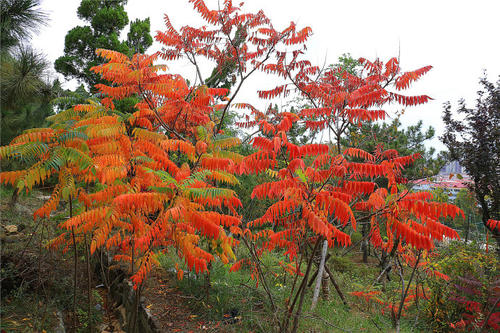