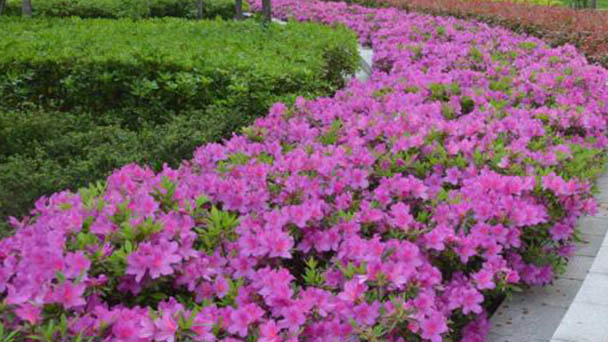 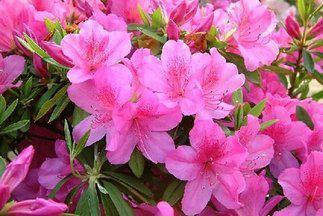 A representative species of the Rhododendron simsii flower is commonly known as the "mountain red". It is almost all over the provinces of the Yangtze River basin, as well as Yunnan, Taiwan and other mountains and hills on the sparse forest or shrub.

Rhododendron simsii is a deciduous shrub, about 2 m high; Branches, bracts, petioles and flowers all have brown flattened strigose.

When Rhododendron simsii flowers were in full bloom, the ancient people left many poems and beautiful and moving legends, and there was the custom of celebrating the festival with flowers. Rhododendrons are mostly shrubs or small trees, which have their own living habits and shapes due to different ecological environments. The smallest Rhododendron simsii are only a few centimeters high, cushion-like, ground growing. The largest is as high as a few feet, standing tall and spectacular.

Rhododendron simsii flowers prefer acidic soils and do not grow well or at all in calcareous soils. Summer to sun shade, winter should pay attention to warm and cold. Avoid the scorching sun exposure, suitable for growing under the light intensity is not big scattering light, light is too strong, young leaves are easy to be burned, new leaves and old leaves coke edge, serious will lead to plant death. In winter, measures should be taken to protect Rhododendron simsii from cold in open field to ensure its safety

How to grow and care for Rhododendron simsii

Rhododendron simsii flowers are best cultivated in both indoor and indoor environments. The interior environment is used in winter. Yangtze River basin, indoor as long as there are certain lighting and ventilation conditions, generally need not heating. Winter in North China is extremely cold and dry, so it is appropriate to use a greenhouse at medium temperature (about 15℃) for cultivation. Outdoor sites, summer and autumn use, with mud as the best, avoid cement. The site should be spacious, ventilated and shady, and the shade should be set up above, covered with reed curtain or by borrowing the protection of natural shade. The light transmittance of about 30% is appropriate, and the sun should not be exposed overnight.

Rhododendron simsii flowers like loose, permeable, well-drained, humus-rich acidic soils with a pH of 5.0 -- 6.0. If you use clay or alkaline soil, it is difficult to live. Especially the summer cuckoo and the ocean cuckoo, not mountain soil.

(3) 3 parts of mountain soil, 3 parts of leaf rot soil, 4 parts of garden soil and 2 parts of sandy soil were mixed and prepared, and 50 grams of sesame paste residue and bone meal were added to each pot.

Cultivation of Rhododendron simsii flower pot, according to the use, generally choose two kinds of mud pot and purple sand pot. Devon ventilation and good water permeability, conducive to root growth, production units are cultivated with this basin. The moulded Rhododendron simsii flower, especially the moulded Rhododendron simsii flower, is generally planted in the elegant purple sand basin for indoor and outdoor display. The purple sand basin is fine in texture, rich in color and beautiful in shape, which can increase the ornamental value. Purple sand basin permeability performance is not as good as the devil basin, when planting, should be in the basin wall pad with broken tiles (old tiles) so conducive to drainage. The size of the pot should be depending on the age of the plant, generally 4-6 years old plants with 5 inch pots; 6-inch pots for 7-10 year old plants; Use 8-inch basins for 11-15 years of reproductive plants. 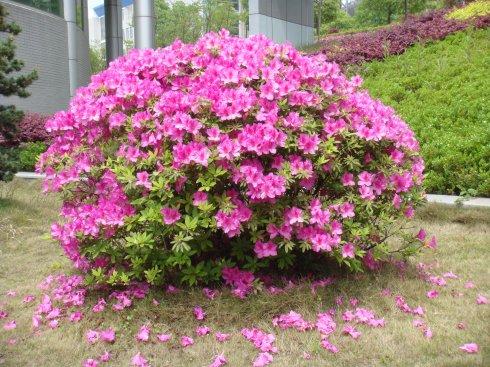 Rhododendron simsii flowers are best watered with rainwater, followed by river water, pond water. If tap water is used, it is advisable to store the water for 1-2 days to let the chlorine evaporate before use. When used, add 0.2% ferrous sulfate, water once every 7-10 days during the growing season, and use frequently to ensure that the soil is acidic.

In the room before the flowering should see more sunshine; During flowering, shade should be carried out for a short time at noon, and the light transmittance is 60%; During the plum rains of summer, when Rhododendron simsii flowers are spawning, you should get as much sunlight as possible. But in case of strong sunshine, from 9 am to 4 PM should also shade, in order to prevent burning the new leaves. In summer, shade should be provided from 8am to 5pm every day to protect against the burning sun. After autumn, the autumn growing season can shorten the shade time, generally can be in the morning from 10 to 4 PM shade, after autumn, it is appropriate to see more sunshine. After plastic surgery, cut off long branches, sick and weak branches, deformed branches, injured branches.

Rhododendron simsii flowers grow slowly. Generally, they are allowed to grow naturally. Only after flowers are reshaped, and long branches, sick and weak branches, deformed branches and damaged branches are cut off.

Disease and insect pests of Rhododendron simsii were mainly controlled by prevention. Before germination of new shoots in winter and spring, flowerpots, soil and plants were sprayed with 600 to 800 times of topbucine solution or equivalent amount of Bordeaux solution for 2-3 times. After new bud germination, spray with 50% wetting carbendazim 600 times solution, once a week, continuously spray for 3 times; Midsummer season, easy to happen red spider, can use 50% dichlorvos emulsion 2000 times the liquid spray kill.

Azaleas are deciduous and evergreen. Deciduous leaves are small and evergreen leaves are large. The colors of flowers are red, purple, yellow, white, pink, blue and so on. Rhododendron simsii is pleasant to cool, moist, cold resistance, more growth in the sea of 1000-1400 meters of the hillside, alpine meadow, forest margin, stone wall and swamp.

The distribution of Rhododendron simsii

Rhododendron Simsii is concentrated in the Hengduan Mountains of Yunnan, Xizang and Sichuan provinces.

China is the distribution center of Rhododendron simsii, with about 460 species, distributed in all provinces except Xinjiang and Ningxia. Southeast Xizang, southwest Sichuan and northwest Yunnan are the most concentrated producing areas, each accounting for more than 100 species. Yunnan alone accounts for more than half of the national varieties of rhododendron. Many countries in the world have introduced species from here. Rhododendron simsii is a large genus, there are about 900 species in the world, distributed in Europe, Asia and North America, and Asia is the largest, 850 species, of which there are 530 species in China, accounting for 59% of the world, especially concentrated in Yunnan, Xizang and Sichuan three provinces in the Hengduan Mountains area, is the birthplace and distribution center of the world rhododendron. Bhutan, Sikkim, Nepal, Myanmar, northern India in the Himalayas, there are also many species, Japan, Korea, the Soviet Union Siberia and the Caucasus only a few species. 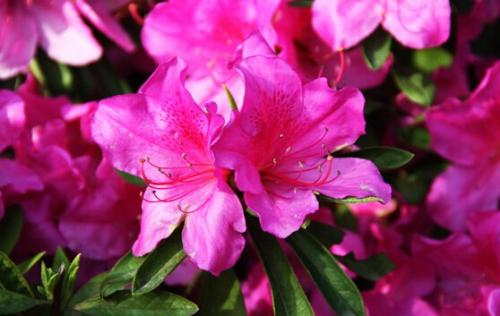