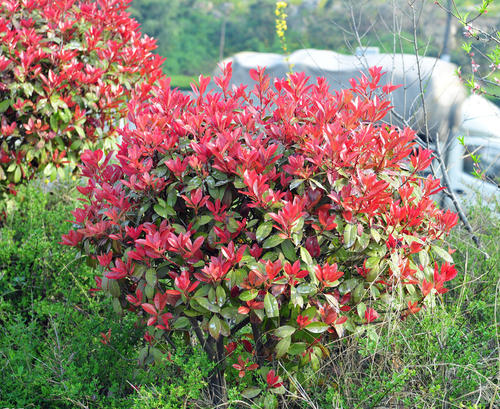 Red Tip Photinia (Photinia × fraseri) is a small evergreen tree, up to 12 m tall, compact plant shape, leathery, long elliptic to lateral ovate-elliptic, serrated, new leaves bright red, complex cymbidium, midsummer to late summer white flowers. red tip photinia berry is red. Leaves are simple, whorled, lanceolate to lanceolate, 6 -- 12 x 2.8 -- 4cm, bright red on new shoots and leaves, leathery on old leaves, dark green with a glossy surface, greenback, smooth and glabrous. Inflorescences of terminal corymbs panicles, 10 -- 18cm long. The new leaves of red tip photinia are red in spring, turn green in summer, and appear red in autumn, winter and spring. The frost is heavy and the color is thicker, and the color at low temperature is better. Foliar is waxy, peripheral irregular small serrated, the top branches of the four seasons leaf stem bright red such as a fire. Red Robin and red lips are two common varieties, of which the red Robin leaf color is dazzling, ornamental better. In spring and autumn, the new shoots and young leaves of Red Tip Photinia are bright and vibrant with long-lasting colors. During the summer heat, the leaves turn bright green, bringing a fresh and cool feeling to the hot summer days.

With the vigorous development of urban landscaping, Red Tip Photinia has been introduced and cultivated in Beijing, Tianjin, Shandong, Hebei, Shaanxi and other places.

In Tangquan Town, Nanjing City, the main business is a large number of Red Tip Photinia, which is one of the most cultivated seedling towns in East China.
Read more:
How to propagate red tip photinia 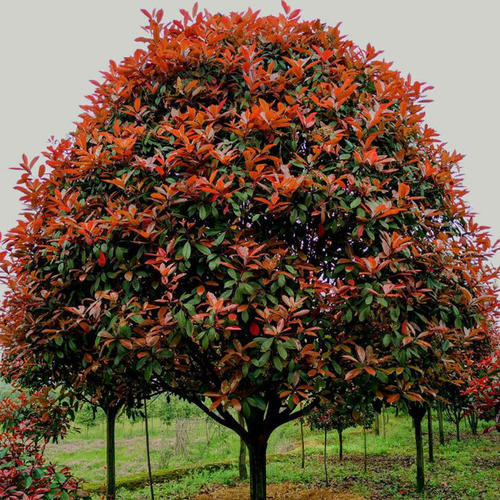 When to Plant Red Tip Photinia

After entering the winter dormant period, the following four measures should be taken to care for Red Tip Photinia in landscape engineering applications.

1. Root injury permafrost of antifreeze soil is easy to cause physiological drought and death of plants. For Red Tip Photinia planted in regions with permafrost in winter, especially those planted in the same year, the soil should be frost proof and the root system should be protected. Ground cover is usually applied half a month before the formation of the permafrost to maintain soil temperature.

3. Application of winter fertilizer in order to ensure the strong growth of spring shoots and the ornamental effect, apply winter fertilizer once from December of the current year to the middle of January of the next year in combination with loose soil. Fertilizer with nitrogen content higher compound fertilizer is appropriate, the dosage is about 40 grams per square meter.

Red Tip Photinia sprout early, usually before the end of February. In order to improve the consistency and compactness of spring new shoot germination, to achieve the best effect of viewing, according to the use requirements of different products in January to carry out the corresponding light pruning. Since Red Tip Photinia is used in a wide range of areas, the corresponding winter maintenance time and measures should be based on the local conditions to achieve the best results.

For the red tip Photinia just bought home, we need to check the dryness and wetness of the basin soil first. If it is dry, we need to water the red tip Photinia, otherwise we don't need to water it. In daily maintenance, water every 3-5 days in spring and autumn, and every day in summer, but don't water too much to avoid rotten roots. The new red tip Photinia plants should be watered once, and watered at the root, which is more conducive to absorption.
Red tip Photinia likes humid environment and is resistant to drought. Water the maple Heather immediately after planting, and keep the soil moist during the growth period. Red tip Photinia watering can vary according to plant growth and climate, especially in the high temperature season in summer.

Red tip Photinia does not need high requirements in the soil, but it is basically fertile and moist. Sand with good drainage is the best choice for red tip Photinia, which requires the depth of soil layer.

Red tip Photinia should be fertilized one month before the grain rain, which can improve the fruit setting rate. If it is an adult tree, it should be fertilized half a month after the grain rain, which can appropriately reduce the amount of fruit. Fertilization is mainly quick acting fertilizer, supplemented by organic fertilizer; If chemical fertilizer is applied, nitrogen, phosphorus and potassium compound fertilizer is the best. Apply 2-5kg per plant, more for big trees, and appropriately reduce the amount for small trees.
We can also apply fertilizer to red tip Photinia at the growth peak, and the absorption and utilization rate of fertilizer is also relatively high. For body fertilizer, it is best to apply farmyard fertilizer and ditch application. The direction and depth of ditching can be changed appropriately. At this time, even cutting off part of the root system will not affect the growth and Fruiting of the plant..

When pruning red tip Photinia, we should strongly cut the plants with many and thin branches and remove some branches: lightly cut the plants with few and thick branches to promote more germinating flower branches. If the tree crown is smaller, the annual branches shall be cut short to expand the tree crown; If the tree crown is larger, retract the main branches and replace the main branches with the side to ease the tree potential. In winter, red tip Photinia pruning aims at shaping, removing some dense and useless branches, maintaining growth space and promoting the development of new branches. The tree species used for modeling should be pruned 1-2 times a year. For example, for hedgerow, red tip Photinia should be pruned frequently to maintain good shape.

The time of red tip Photinia repotting is generally from March to April in spring and from October to November in autumn, which shall be determined in combination with local climatic conditions. The planting spacing should be determined according to the nursery retention time and cultivation objectives. If the plan is to cultivate annual shrubs, the spacing between plants and rows shall be 35 × 35 cm or 40 cm × 40 cm is appropriate, about 3000 plants per mu.
When we are in red tip Photinia repotting, we should carefully remove the packaging or remove the nutrition bowl to ensure the integrity of the root soil ball and dig holes at fixed points; Pile fine soil on the root, stretch the root and compact it gently. After red tip Photinia repotting, pour the root setting water in time.
During the slow seedling period after planting, we should pay special attention to water management. In case of continuous sunny days, we should water once 3 ~ 4 days after transplanting plants, and then every 10 days or so; In case of continuous rain, drainage shall be carried out in time.

Red Tip Photinia (Photinia × fraseri) has a strong resistance to Photinia and no destructive diseases or pests were found. Common Red Tip photinia diseases and insect pests include blight, cataplexy, leaf spot, gray fungus, leaf spot, anthrax and scale insects, etc. These infectious diseases often cause large-scale death of Red Tip Photinia in a short period of time and bring serious losses to seedling farmers. Nursery of Sichuan county of Henan province quotes expert point of view of the nursery to introduce a few kinds of comprehensive prevention and control measures to you, in order to provide friends of nursery farmers need when reference.

Gray mold of Red Tip Photinia can be prevented by 50% carbendazim 1000 times liquid spray and can be prevented by 50% diazepine 800 times liquid spray during onset. Leaf spot disease can be controlled by 60% carbendazim 300-400 times solution or obtain 300-400 times solution. Scale insects of Red Tip Photinia can be sprayed with 200 times of diethanate emulsion or 800-1000 times of liquid spray prevention and control. The soil silkworm prevention and control should be carried out before planting, the ground should be properly deep plowing, and sprinkle phosphorus-containing insecticides such as soil insects must be killed. In case of silkworm damage after planting, remedial treatment should be carried out in time, otherwise the spread will be very harmful, especially for the Red Tip Photinia in the seedling stage, which may cause a large area of death.

Growth speed and strong germination, resistance to pruning, Red Tip Photinia (Photinia × fraseri) can be cultivated into different tree shapes according to the needs of the garden, widely used in landscaping. One to two years old Red Tip Photinia can be pruned into dwarf shrubs, used as ground cover in green Spaces, or combined with other color-leaved plants to form various patterns. It can also be cultivated into small trees that are not obvious and clumps, and planted into large hedges or curtain walls. Red Tip Photinia can be applied in the green belts of residential areas, factory areas, streets or highways. When the hedges or curtain walls are red, they are very gorgeous and full of vitality. Red Tip Photinia can also be grown as a solitary, spherical canopy tree that can be planted alone in green Spaces, used as a sidewalk tree, or potted for porches and indoors.

Red Tip Photinia has been widely used in foreign countries, especially in Europe, America and Japan, and is known as the "King of Red Leafed and Green Hedgerows". However, Red Tip Photinia is a newly introduced and developed tree species in China in recent years. At present, it is in the seedling breeding stage, and only a few seedlings are supplied to the market. There are no large-scale seedlings for garden application. Far from meeting the needs of nursery and garden engineering applications. Therefore, the market prospect of the tree species is broad and the development potential is huge. 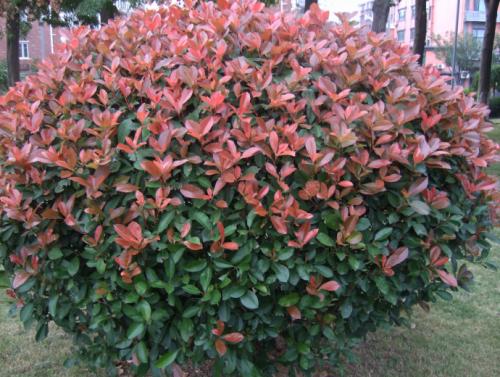 After red tip Photinia propagation by cutting, we should immediately pour enough water on the seedbed to maintain the moisture of the seedbed and closely combine the cuttings with the soil, which is conducive to the healing and rooting of cuttings. After cutting in red tip Photinia propagation, we can use moso bamboo strips and other materials to build an arch shed. It is covered with plastic film to maintain the temperature and humidity in the shed. After red tip photinia propagation from cutting, the wound usually heals in about 15-20 days to produce callus. New roots begin to grow after 20-30 days, and the most suitable temperature should be controlled at 25 ℃ - 28 ℃. After cutting in late spring and early summer, the temperature rises gradually. During this period, the temperature in the shed should be checked frequently. When the temperature is high, spray water on the film to cool down; When it is higher, a shadow shed should be erected. We can use 70% shading net to cool down 40-50 cm away from the arch shed; Open both ends of the arch shed for proper ventilation. Spray the sprinkler head into the shed twice a day in the morning and evening to maintain the humidity inside the shed and leaves.

How to Propagate Red Tip Photinia

How to Grow and Care for Red Tip Photinia

Diseases Red Tip Photinia - Causes & How to Save

How To Prune A Red Tip Photinia - Plant Pruning Tips