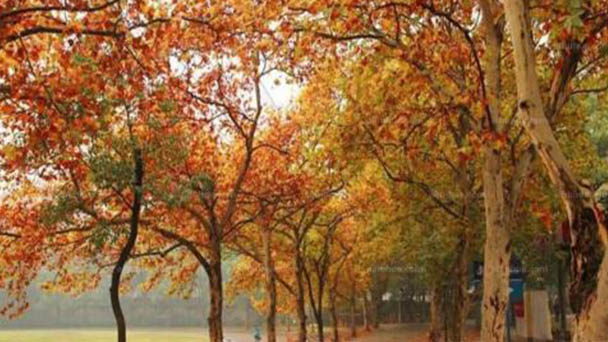 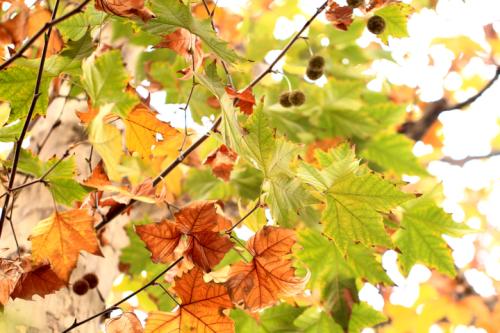 Platanus orientalis is a large deciduous tree, up to 30 m tall, with flaky peels of bark. Tendents are yellow-brown villi, old branches bald net, reddish-brown after dry, with a small lancet.

Outline of Platanus orientalis leaf is big, broadly ovate, 9 to 18 cm wide, 8-16 cm long, base shallow triangular heart-shaped, or close to, the upper palmate 5-7 crack, crack dilute to 3, central lobe deep crack half, 7-9 cm long, 4-6 cm wide, lobes short on both sides, the edge crack a few flake coarse teeth, up and down both sides of the early be yellow-gray by MAO, after shedding, only in the back pulse hairy, palmate veins 5 or 3, issued from the base. The petiole is 3 -- 8 cm long, terete, tomentose, base enlarged; Stipules are small, shorter than 1 cm, base sheathlike.

The Fruit branches of Platanus orientalis are 10-15 cm long, with 3 to 5 (rare to 2) spherical fruit heads. Capicephala is 2 -- 2.5 cm in diameter, persistent style protruding spiny, 3 -- 4 mm long, yellow tomentose between nutlets, protruding outside the head.

Platanus orientalis loves light and is hardy to cold weather because it likes humid and warm climates. Platanus orientalis is not strict to the soil, but it is suitable to grow in slightly acidic or neutral soil with good drainage. Although the slightly alkaline soil can grow, it is prone to yellowing. Root distribution is shallow, prone to typhoon and inclined. Anti-air pollution ability is strong, the leaf has the function of absorbing toxic gas and stagnation dust.

Platanus orientalis is widely used as a road greening tree as well as a fast-growing timber tree because of its tall trunk, lush foliage and rapid growth. It is adaptable and easy to survive, resistant to pruning and smoke and dust. Platanus orientalis has a strong resistance to toxic gases such as dioxides and chlorine.

Cutting and processing of cuttings

After the seed strips were collected, Platanus orientalis was cut into 15~20cm long cuttings immediately, and each cutting retained 2 nodes and 3 full buds because the nutrients in the branch nodes were more than those in the internodes. The lower incision should be close to the lower node, generally about 1cm from the base of the bud to heal the roots. The upper incision should be 0.5-1cm from the tip of the bud to prevent water loss and wilt of the terminal bud. Each 50 to 100 cuttings is bundled into a bundle, and then a pit 60 to 80cm deep and 80cm wide is dug in a well-drained place with the wind to the sun. The length of the pit is determined by the number of cuttings. Pit bottom shop a layer of soil, will cuttings big head down, upright emissions on the soil, the final cover into a sphere, to prevent rain infiltration, to be taken out in the spring of the second year for cutting. Spring can also be inserted with the harvest, the survival rate is higher.

Cuttage before the choice of good drainage, loose fertile plots, deep turn, disinfection, leveling made of cutting bed. To be in March, the middle of the cutting bed flooded 1 time, such as water infiltration, the whole bed covered with plastic film. At this point, take out the sand cuttings and soak them in 1000 times of rooting agent for 2~3 days, and change the rooting agent once every 24 hours. After the ear dipping was completed, the cutting was carried out according to the plant row spacing of 15cm×30cm. Before inserting, a hard stick with the same thickness as the cuttings was used to drill holes about 10cm deep, and then cuttings were cut. The cuttings were exposed to the ground about 5cm. After inserting the whole bed, fine soil was used to block the surrounding cuttings so that the cuttings were in close contact with the soil. 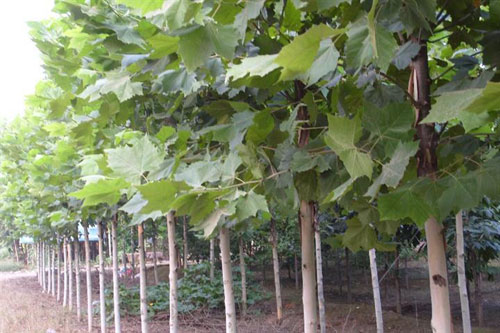 Platanus orientalis is one of the main diseases of this disease. To prevent and control this disease, transplanting seedlings can be used. Replanting is strictly prohibited. In autumn, seedlings and leaves were collected and burned to reduce overwintering bacteria. In spring, spray 1:2:200 times of Bordeaux liquid on the seedling for 2~3 times to prevent disease. The liquid should be sprayed on the back of the seedling leaves.

When a large number of adults and the first hatching larvae occur, chemical spray branches or tree crown can be used, 40% oxidized diethoate emulsion, 50% phoxim emulsion, 90% trichlorfon crystal, 25% deltamethrin emulsion, such as 100~500 times the liquid. Injecting and plugging were used to prevent and control the larvae that had entered the xylem.

For most longicornis and wood moth larvae, it can be used: 1~50 times liquid of DDVO, dimethyl oxalate and deltamethrin can be stuffed into the wormhole with syringe or cotton; The wormhole was plugged with aluminum phosphide or zinc phosphide poison spatula and sealed with yellow mud externally.

The distribution of Platanus orientalis

Platanus orientalis is a native of Southeast Europe and West Asia. It has been introduced since the Jin Dynasty in China. There is an ancient tree in Huxian County, Shaanxi Province, called Quhan or Kumarash.

The fruit of Platanus orientalis is used as medicine.

Platanus orientalis is a world-famous shade and street tree with a majestic and dignified tree shape, large and pus leaves, smooth dry bark and strong adaptability. It is widely cultivated around the world. Platanus orientalis has strong adaptability, and is resistant to pruning and shaping, is an excellent street tree species, widely used in urban greening, in the Garden alone planted in the lawn or open ground, planted on both sides of the corridor, especially magnificent.

Platanus orientalis is highly resistant to a variety of toxic gases and can absorb harmful gases. Platanus orientalis has a remarkable effect on cooling, dust retention, noise reduction, absorption of harmful gases, improving air relative humidity, adjusting the balance between carbon dioxide and oxygen, and improving air quality. As afforestation of neighborhood, factory and mine are quite appropriate.

The fruit of Platanus orientalis is used as medicine. Wood can be made into furniture. 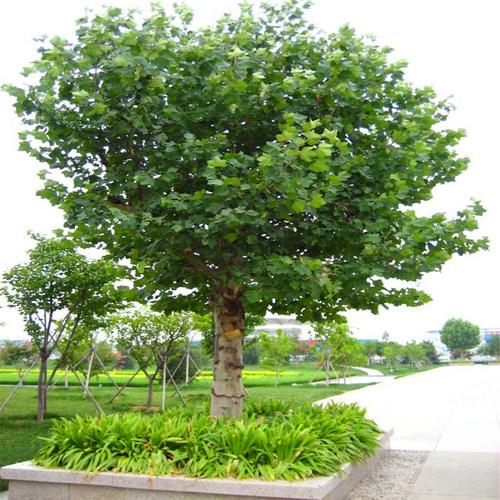