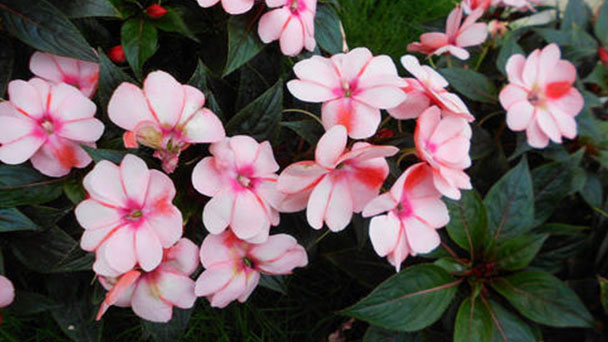 New Guinea impatiens were multi-shaped, with lanceel-shaped leaves and sharp sawtooth leaf edges, and the color of leaves was yellow-green to dark green. The color of leaf veins and stems was often correlated with the color of flowers.

New Guinea Impatiens showed single Flower leaf axils (sometimes two flowers were born in the leaf axils), and the base petals were derived into moments, with extremely rich patterns and colors, such as magenta, snow blue, white, purple, orange and so on.

New Guinea impatiens like heat and require plenty of sunlight and deep, fertile, well-drained soil. The rainy season drainage is not good, ventilation is not good, easy to suffer from powdery mildew or rot rhizomes and leaves, pay attention to ventilation, reduce the temperature.

New Guinea impatiens prefer warm and humid, not cold-resistant and afraid of frost, so the room temperature in winter should not be lower than 12 degrees; Summer requires cool, avoid hot sun exposure, and need a little shade, not drought, afraid of water stains. The soil requirement is not strict but is sensitive to salt damage. New Guinea impatiens grow well in loose and fertile soil. Three parts of peat, one part of sand and one part of Garden soil are suitable for soil preparation. The pH value is 5.5-6.5.

New Guinea impatiens sowing propagation time is generally in 3-4 months, timely harvest, with the harvest with sowing. The suitable temperature for germination is 22 degrees. The method of tissue culture propagation has been successful and large-scale production has begun. In the production, New Guinea impatiens showed poor self-pollination ability and high tissue culture cost, so the cutting method was often adopted for propagation. Cutting season to spring, summer, early autumn is appropriate, greenhouse can carry on annual reproduction. The cuttings can be directly picked from the buds between the axils of leaves for micro cutting, and the propagation speed is quite fast. You can also cut the current branch into several sections, each section 2-3. Cutting substrate with plain sand or vermiculite can be. In order to improve the rooting rate of cuttings, new roots can be produced within 5-6 days after dipping with ABT root powder. Two weeks later, when the roots are 2-3cm long, they can be put into the pot.

The appropriate cultivation temperature for New Guinea impatiens is 16-24 degrees. Temperatures lower than 15 degrees or higher than 32 degrees will affect normal growth, light requirements 30-50,000 Lx. If the temperature is suitable, annual flowering may be possible. New Guinea impatiens should be carefully managed, and watering should follow the principle of "see dry, see wet". Every 7-10 days spray a leaf fertilizer or every half a month retting system of thin water, its growth is more pleasant. Two or three weeks after planting, when the seedling height reached 10-15cm, apply compound fertilizer 0.5g/L, a small number of multiple times, too many nutrients, brown spots on leaves, fertilizer nitrogen content should be controlled at 50-100mg/L. When the light is strong, the flowering is early and small. At this time, we should often pick the heart to accumulate nutrients to promote lateral branches and make the plant plumper.

How to Grow New Guinea Impatiens

The issue to take into account about New Guinea impatiens is that, even though it will tolerate average quantities of sunshine, it nonetheless prospers in the mild shade. Flower beds on the east aspect of a building, which get morning sunshine and afternoon shade, are the best places for these New Guinea Impatiens. Fill the beds with mass plantings for a first-rate look. Each plant will develop into a rounded mound, and if planted 18 inches apart, they’ll develop to fill in the complete house in a count of weeks. Keep the flora in the front of the mattress 12 inches (30 cm.) away from the edging to preserve the front branches from developing onto the garden or sidewalk. Caring for New Guinea Impatiens The great developing suggestions for New Guinea impatiens have to do with paying interest to small details. None of the sorts of this plant can tolerate drought very well, so hold the soil moist with soaker hoses or different watering devices. In warm summer season months, this might also suggest each day watering that soaks deep into the ground. 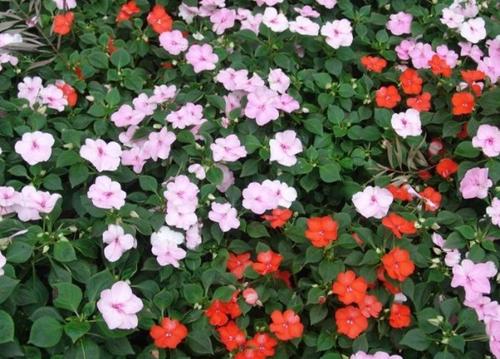 How to care for New Guinea Impatiens

New Guinea Impatiens can be a heavy feeder, so provide it month-to-month feedings of low-nitrogen plant food. This will motivate the plant to develop besides discouraging any of the flower production. Once you comprehend how to develop New Guinea impatiens, you’ll discover that it’s a beneficial plant for planters and putting baskets as properly as for mass bedding. Move the containers every day to maintain the flora in the coloration for most of the day and you'll locate they thrive in nearly any planting group.

New Guinea ens grew strongly and showed strong resistance to diseases and insects. So far, large epidemic diseases and insect pests have not been found, but occasionally stem rot occurred during cutting, so regular spraying of microbicides can play a preventive role. Strengthen ventilation management, can reduce aphids and red spider harm, once found, immediately use an insecticide to kill.

New Guinea impatiens were mainly distributed in Guangdong, Guangxi, Hainan and other southern China regions, with the production volume accounting for about 60% to 70% of the total. Other regions were distributed in Xinjiang, Gansu, northeast Sichuan, and surrounding areas of Beijing. 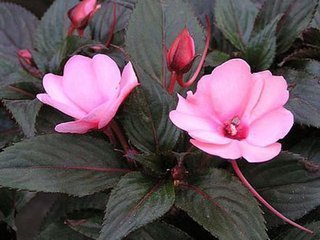