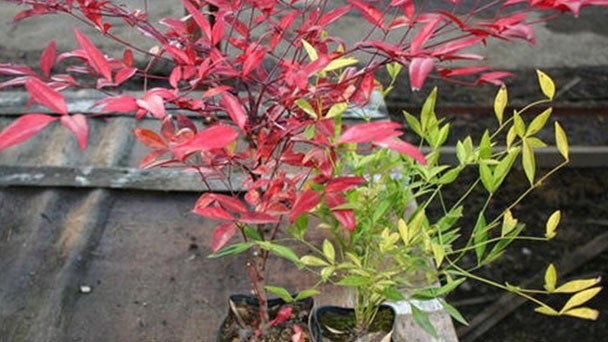 Nandina is an evergreen shrub in the Berberidaceae family, also known as Nandina domestica, heavenly bamboo or sacred bamboo. Because of its elegant shape, Nandina is often used to make bonsai or bonsai to decorate the windowsill, hall, venue, etc.

Nandina (heavenly bamboo) likes a warm and humid environment, relatively tolerant to shade. Nandina (heavenly bamboo) is Easy to maintain. Cultivation soil requires fertile, well-drained sandy loam. Not very strict to moisture requirements, both wet and drought resistance. More like fertilizer, phosphorus, potassium fertilizer can be applied. During the growing period, apply liquid fertilizer 1~2 times a month. Potted plants after a few years of viewing, branches and leaves aging off, can be whole pruning, generally, the main stem left about 15cm can be pruned in April, autumn can be restored to 1m high, and plump crown.

Nandina (heavenly bamboo) grows wild in open forests and shrubs and is often planted in gardens. The leaves turn red under strong light. It is suitable for growing in moist, fertile and well-drained sandy loam soil.

Harvest seeds of Nandina (heavenly bamboo) in autumn and sow them after harvest. In the whole good seedbed, according to the row spacing 33 cm ditch, about 10 cm deep, evenly sow, sow per hectare for 90-120 kg. After sowing, cover with wood ash and fine soil and press tightly. The second-year seedling growth is slow, often weeding, loose soil, and uses light human and animal dung urine. From now on, we should pay attention to medium plowing and weeding every year. Topdressing, cultivated after 3 years, can go out of nursery planting. Transplanting should be carried out after a spring rain. The spacing between plants and rows is 100 cm. Before planting, take the soil to dig up the seedlings, if you can not take the root, you must use thin mud, after planting it is easy to survive.

The spring and autumn two seasons will cluster Nandina (heavenly bamboo) dig out, shake off the soil, cut off from the foundation union weak place, each cluster takes stem 2 to 3, need to take part of the root system, cut off a few larger pinnate compound leaves at the same time, the ground is planted or on the basin, cultivate one or two years later can blossom and bear fruit. 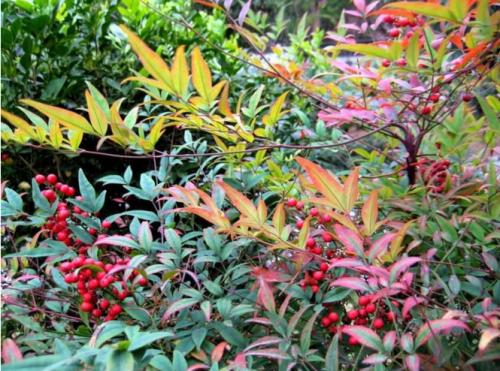 How to grow and care for Nandina

Nandina is now not choosy about soil type, then again prefers an incredibly loose, fertile and well-drained soil. As with so many different kinds of decorative plants, continuously soggy or moist soil can and frequently will purpose root rot and different detrimental plant diseases.

When it comes to light, Nandina are extraordinarily versatile. Plant them in solar or color and they will do fine. That said, foliage shades will be greater severe with extra sun.

Nandina are mild feeders, then again will be advantageous from fertilization. To preserve desirable foliage colour and aid increase and normal fitness of the plant, feed Nandina in spring with a slow-release shrub & tree food. Alternatively, you can feed with herbal natural plant food. To keep away from stimulating new booms that may want to be broken by using an early frost, give up fertilization of Nandina two months prior to the first frost date in your area.

Nandina are especially drought tolerant when established. That said, in the absence of rainfall, younger Nandina will require some moisture at some point of the first 12 months whilst setting up a root system. As with so many different plants, continuously soggy or moist soil can reason damaging root ailments and even death. So be cautious no longer to over-water them!

Nandina do not now require pruning for fitness or overall performance without eliminating broken or useless plant components or to do away with a stray department that is spoiling the structure of the plant. Compact preferences of Nandina (growing beneath three toes in height) continue to be tidy with little or no pruning. Sometimes, taller developing Nandina sorts will turn out to be naked at the backside over time and pruning restores a full and compact look.

Symptoms: Disease occurs in the leaves of Nandina (heavenly bamboo), starting at the edge or tip of the leaves.At the beginning, the disease spots are brown dots, and then gradually expand into circular or wedge-shaped spots, with a diameter of 2.5 to 5.5 centimeters. The disease spots are brown or dark brown, surrounded by dark brown speckled edges, slightly radiating, and surrounded by a wide red halo.Late in the disease in clusters of grey-green to dark green smudgy lumps, that is, the pathogenic bacteria conidia.

Symptoms: The disease occurs on the leaves of Nandina (heavenly bamboo), beginning as brown spots, and gradually expanding into round oval and irregular spots with dark brown bands at the edges.When the disease spot dense confluence into the major disease spot, can account for more than half of the lobules.In the late stage, dense raised small black spots are produced on the spots, and pink sticky blocks are produced on the small black spots when the weather is wet.

(1) Remove diseased leaves in time, burn or bury them.

The species classification of Nandina

Foxtail Nandina with fruit-bearing ears more than a foot long, like foxtail;

A colorful Nandina with long, narrow and dense leaves and a variety of purple colors;

Leaves such as piano wire, short branches, suitable for making a desk for the piano wire Nandina;

Nandina is also grown in Japan and India.

Landscape use of Nandina

Nandina (heavenly bamboo) is a common woody Flower species in southern China. Due to its beautiful plants, bright fruits and strong adaptability to the environment, it has often appeared in landscape applications in recent years. Nandina (heavenly bamboo) is mainly used as a plant configuration in the garden. As a flower shrub, you can see its bright flowers and fruits. It can also be used as an indoor potted plant, or as a fruit-cut flower.

Nandina (heavenly bamboo) is a toxic plant included in the Chinese Plant atlases Database. Its toxicity is toxic to the whole plant. The poisoning symptoms are excitement, rapid pulse first and then slow, irregular, blood pressure drop, muscle spasm, respiratory paralysis, coma and so on. 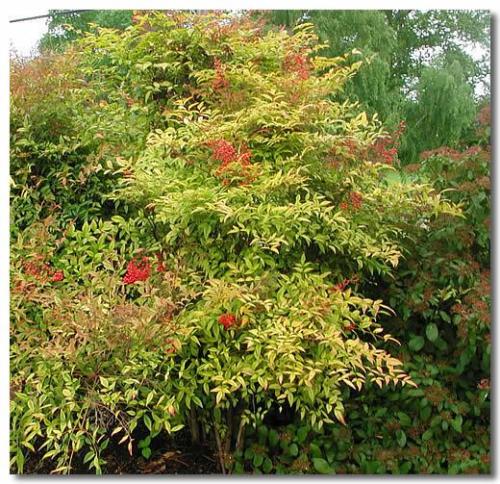 How to grow and care for Nandina (heavenly bamboo)