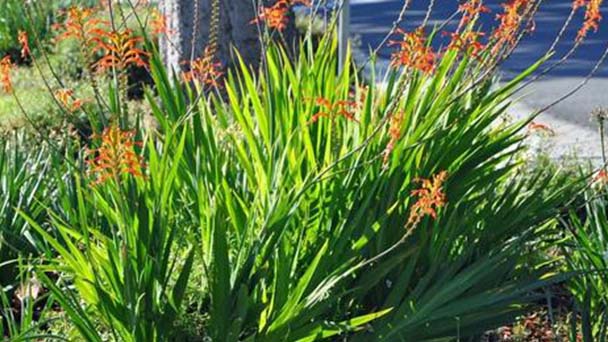 Montbretia, scientific name Crocosmia crocosmiflora, is a hybrid of Montbretia palassima and Montbretia yellow, which is native to southern Africa. Montbretia likes full sunshine, cold resistance. In the middle and lower reaches of the Yangtze River, the corm can overwinter in the open field. Montbretia is suitable for growing in well-drained, loose and fertile sandy loam soil, and the growth period requires sufficient moisture in the soil. Montbretia was born on the slopes of damp shade. Midsummer flowers are in full bloom, which is a good material for arranging flower borders, flower beds and cut flowers. 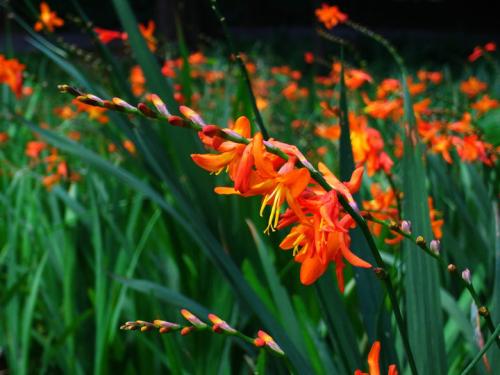 Montbretia is a perennial herb, corm and stolon, corm flat round shape like water chestnut, outside a brown fiber membrane. Stems are on the ground about 50 cm high, often branched. Leaves are linear sword-shaped, the base of a leaf sheath stem and stem. Most flowers of montbretia arranged into a complex panicle, extracted from the green leaves, scattered at random, density has sent. Montbretia has funnel-shaped flowers, orange-red, garden varieties are red, orange, yellow; Perianth tube thin and slightly curved, lobes spreading. Capsule, containing several seeds.

Montbretia likes full sunshine, cold resistance. In the middle and lower reaches of the Yangtze River, the corm can overwinter in the open field. It is suitable for growing in well-drained, loose and fertile sandy loam soil, and the growth period requires sufficient moisture in the soil.

How to grow and care for Montbretia

In spring, after the danger of frost has passed. Crocosmia can be slow to sprout, especially if temperatures are cool. To jumpstart growth, wait until soil and air temperatures warm up.

Montbretia likeS plenty of suns, so be careful to keep Montbretia in the sun.

One of Montbretia's distinguishing features is its resistance to cold. In the middle and lower reaches of the Yangtze River, the corm can overwinter in the open field. In the north of China, it is better to put Montbretia indoors in the winter where it is easy to see the sun.

Montbretia is suitable for growing in well-drained, loose and fertile sandy loam soil. The growth period requires sufficient moisture in the soil.

The growth of Montbretia is actually an extension of the stolon, and it's a very strong creeper. Therefore, the soil should be fully tilled before planting, apply sufficient base fertilizer, whole into high bed. After germination in spring, apply to topdress once during the gestation period and once after flower fading, so that the leaves are luxe and the flowers are full, forming a full and renewed bulb. In this way, the normal bulbs will bloom in the summer of the same year if they are early, and the weak ones will bloom the following year.

Because Crocosmia are more cold-hardy than Gladiolus, you can usually leave the corms to overwinter in the ground without having to dig them up. To help ensure their survival, cover them with a layer of mulch to insulate them from severe cold snaps. If you live in zone 4 or below, don’t take chances. Lift the corms and store them in a cool, dry location over winter and replant them in the spring. 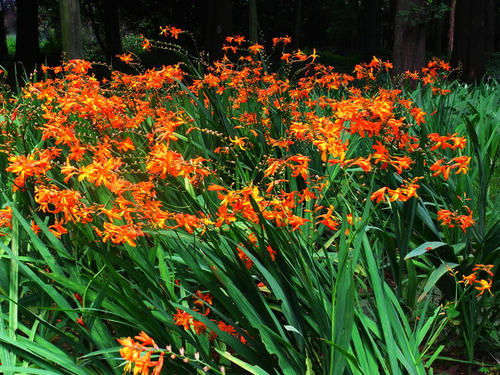 The natural propagation ability of Montbretia is strong, and it is commonly used to divide the ball to propagate. Generally 3 years ball 1 time, in the spring bud germination before digging up the bulb, ball planting.

Montbretia corms have strong natural reproduction ability and are often propagated by bulblets. Generally 3 years ball 1 time, in the spring bud germination before digging up the bulb, ball planting. Montbretiais strong due to the elongation of the stolon. Before planting, the soil should be fully ploughed, applied sufficient base fertilizer, whole into a high bed. The depth of planting is 3-5 cm.Bulb. Generally bulbs bloom in summer of the same year. Small bulbs bloom the following year.

Montbretia originated in South Africa, the north of our country for the pot, the south can be cultivated on the open ground.

Montbretia comes in three colors: red, orange and yellow. Montbretia can resist the heat. In midsummer, the flowers are in full bloom, making it a good material for flower arrangements, flower beds and cut flowers. Montbretia is also suitable to be planted on the street green island, in front of buildings, on the lawn, and by the lake. Montbretia can also be used as cut flowers. 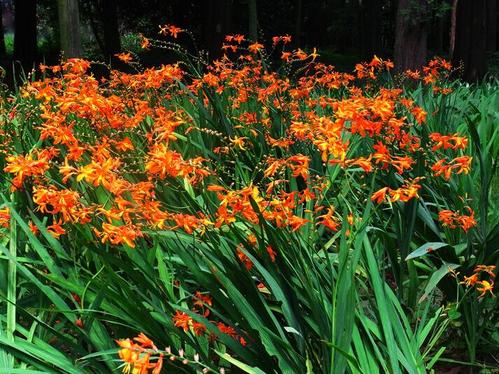