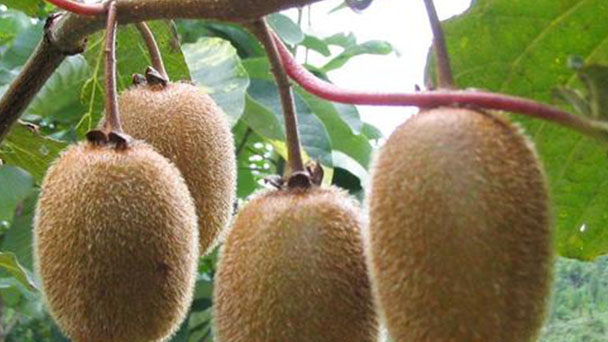 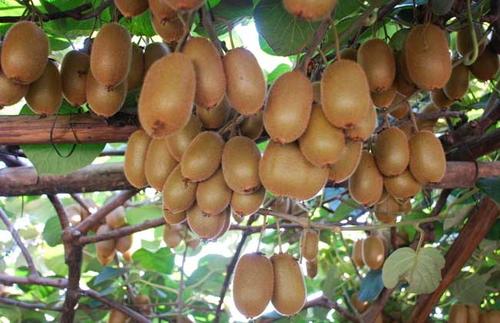 Leaves of Kiwi fruit are for print, without stipule, broadly ovate to obovate or broadly ovate to suborbicular, 6 to 17 cm long, 7 to 15 cm wide, apex cut flat form and sunken into the middle or short acuminate, acute to acuminate, base obtuse round, flattened shape to shallow heart, margin vein out straight stretch of ciliary small tooth, the front variegated dark green, glabrous or midrib and lateral veins have a small amount of fur or scattered by short hair rough, and on the back of the pale green, densely covered with grayish white or light brown stellate hairs, lateral veins 5-8 pairs, often in the middle above divided into fork, lateral veins more developed, easy to see, the reticular small vein is not easy to see; Petiole of Kiwi fruit is 3-6(-10) cm long, covered with grayish velutinous hairs or russet bristles or rust-colored bristles.

The distribution of Kiwi fruit root growth in the hard soil layer is shallow; Grows in loose soil distribution is deeper.

Kiwi fruit is fleshy root, and the root bark percentage is up to 30% ~ 50%. The root moisture content is high, the annual root water content is 84%, the biennial root water content is 79%, Kiwi fruit main roots are not developed, lateral roots and fibrous roots are developed. Kiwi fruit has a shallow and widespread root system. The thickness of active soil layer, temperature, moisture, air and nutrients are the main factors affecting root growth. In general, Kiwi fruit is most distributed in the soil layer with a depth of 40-80 cm. The distribution of the adult root population is about three times the size of the crown.

Roots Kiwi fruit has fewer backbone roots than ordinary fruit trees, but the roots have developed ducts, high root pressure, and strong regeneration ability after root injury. More than 50% of the total root length of adult Kiwi fruit is located in topsoil 30-50 cm deep, and more than 90% of the root length is within 1 m. Roots of young Kiwi fruit trees were bowl-shaped, and root length density decreased with depth and distance from the tree trunk.In adult trees, the density of root length decreased with depth, but was not affected by the distance from the trunk. Kiwi fruit has a longer root growth season than branches, with more than 30% of the root system being renewed each year.

Kiwi fruit is about the size of a duck egg (about 6 centimeters high and 4.5 to 5.5 centimeters in circumference), and is usually oval. Dark brown with hairy skin is generally not edible.Inside are bright green pulp and rows of black seeds. 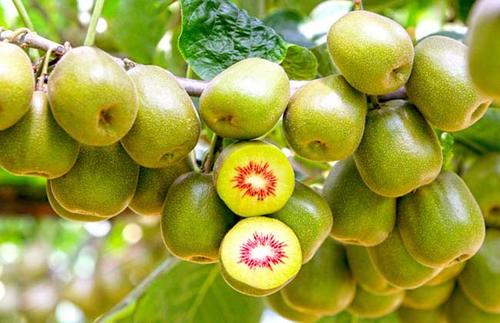 Kiwi fruit needs water but is afraid of waterlogging. Kiwi fruit is a fruit tree with weak physiological drought tolerance and moisture tolerance. Therefore, Kiwi fruit has strict requirements on soil moisture and air humidity, which determines that Kiwi fruit is the most suitable for cultivation in areas with abundant rainfall and uniform distribution, high air humidity, wet but not waterlogged. The annual precipitation in the natural distribution areas of Kiwi Fruit in China is 800 mm ~ 2200 mm, and the relative humidity of air is 74.3% ~ 85%.Generally speaking, the regions with annual precipitation of 1000mm ~ 2000mm and relative humidity of air around 80% can meet the water requirement of Kiwi fruit growth and development. If the average annual rainfall is 500 mm, it is necessary to consider setting up irrigation facilities for drought. High mountain areas are ideal for Kiwi fruit growth because of high fog, moist soil along streams and year-round humidity. In central and eastern regions, there is plenty of rain in spring, and the shoot growth is large, which is suitable for the growth of Kiwi fruit.

Kiwi fruit has large and dense leaves, high transpiration, and large demand for water. It is estimated that an adult Kiwi fruit tree with a canopy area of 25 square meters loses more than 75 liters of water per day through transpiration. Generally, when the soil moisture content is reduced to 5%-6%, the water shortage will result in the blocked shoot growth of Kiwi fruit, and its leaves will suffer from drought, sag of leaves will become smaller, and the leaf edge will wither. In the drought, the leaves begin to dry up, then must be timely irrigation or water, especially in the seedling stage, the root system has not been fully expanded, but also needs to supplement sufficient water. In addition to drought resistance, Kiwi fruit is also resistant to waterlogging, with about 40% of the plant dying after two to three days of poor drainage or waterlogging.In southern China's plum rain or northern rainy season, if continuous rain and poor drainage, the roots will be flooded, affecting root respiration, root tissue decay, and plant death. Therefore, deep furrow and high bed planting should be carried out when planting, and complete drainage and irrigation systems should be built in the orchard.

Most Kiwi fruit species like semi-overshade environments, like sunshine but are sensitive to strong light irradiation. They belong to moderately light-loving fruit tree species, requiring sunshine time of 1300 -- 2600 hours, and are fond of diffuse light and avoid direct strong light. Results The plant required certain illumination, and the natural illumination intensity was 42-45%.

The soil for Kiwi fruit should be deep and fertile, with good air permeability, underground water level below 1 meter, high organic matter content, pH value 5.5-6.5 slightly acidic sandy soil, strong acid or alkaline soil should be improved and then cultivated.

In addition to soil quality and pH, mineral nutrients in the soil also have an important effect on the growth and development of Kiwi fruit. Since Kiwi fruit requires large amounts of nitrogen, phosphorus, potassium and abundant magnesium, manganese, zinc and iron, the lack of these minerals in the soil often leads to nutritional deficiencies on the leaves. Therefore, in order to ensure the normal growth and development of Kiwi fruit, it is necessary to improve the unideal soil by pumping, measuring the soil formula and fertilizing, burying a large amount of green manure and a certain amount of lime before planting in the garden.

The main value of kiwi fruit

Kiwi Fruit is a rich source of minerals, including calcium, phosphorus and iron. It also contains beta-carotene and multivitamins, which are important for maintaining good health.

Known as the "King of Fruit", Kiwi Fruit is a sweet, sour and nutritious fruit for the elderly, children and the infirm and sick. 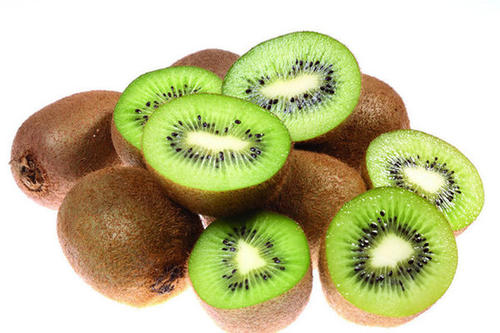