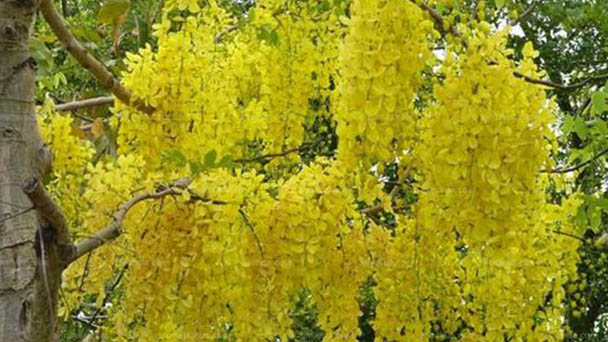 Golden shower tree (Cassia fistula), also known as purging cassia, Indian laburnum, or pudding-pipe tree, belongs to the subfamily Sapanaceae. There are about 250 species of this genus in the world. Golden shower tree is the national flower of Thailand. Golden shower tree is native to southern South Asia from southern Pakistan eastward to India and Burma and southward to Sri Lanka. It is found in Burma, Sri Lanka, India, south and southwest of mainland China, and grows up to 1,000 meters above sea level. Golden shower tree is a deciduous tree, up to 22m. Petiole, or inflorescence axis without glands; Leaflets are 3--4 pairs, ovate to elliptic, 8--15 (20) cm long. The flowers grow to about 20-40 cm in pendulous axillary racemes. The diameter of the flower is about 4 to 7 cm, 5 petals free, the size is slightly equal, 10 stamens, filaments yellow curved hook, among them 3 long, 4 medium and the other 3 short for infertility. After flowering, Golden shower tree produces long clavelike non-dehiscing pods, about 30 to 60 cm long, 1.5 to 2.5 cm wide, it takes one year to ripen, the color changes from green to dark brown, each cell has one seed, oblate and brownish luster, the flesh is pitch-like black sticky, with a pungent odor. Some seeds are said to be sweet and edible, others are said to be poisonous and purgative, and the ancient Egyptians used them as a laxative. The bark contains tannins and can be used as a red dye. 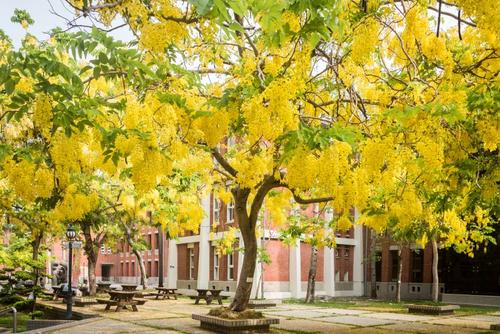 Golden shower tree is a deciduous small or medium tree, up to 15 meters high; Branches are slender; Bark is smooth and gray when young, coarse and dark brown when old.

Golden shower tree leaves 30-40 cm long, with 3-4 pairs of leaflets, without wings or glands on leaf axes and petioles; Leaflets are opposite, thinly leathery, broadly ovate, ovate or oblong, 8 -- 13 cm long and 3.5 -- 7 cm wide, apex short acuminate and obtuse, base cuneate, margin entire, puberulent on both surfaces when young, glabrous when old; Vein is slender, obvious on both sides; Petiole is short.

golden shower tree propagate themselves from seeds. When the seeds are mature, pick back and mash the pericarp to take out the seeds, soak in boiled water for 3-5 minutes before sowing, take out about 10 days, spray 1 time (such as 666 powder, etc.) to eat leaves for insect control, after every 10 days spray 1 time, until transplantation. Timely weeding at seedling stage is the key to high and low seedling preservation rate. Seedlings 20 cm high for the first time, 30 -- 40 cm for the second time. Loosen the soil 2-3 times a year. Fertilizer is applied every two months from spring to fall. Pruning and pruning should be done once after flowering.

Propagation available sowing, cutting method, spring, autumn for the appropriate period. Seedling height more than one meter to transplant. Golden shower tree is a thermophilic tree species, with sandy loam best, drainage, sunshine need good, there is frost damage and the area can not grow. 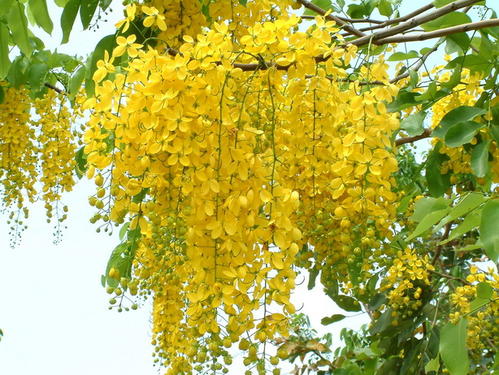 Wax borer, Aphid and nocturne moth are harmful to young leaves and terminal buds, and can be sprayed with 50% phoxim solution 1000~1500 times, or 20% tachymethane emulsion solution 2000~3000 times.

Golden shower trees are native to southern South Asia, from southern Pakistan eastward to India and Burma, and southward to Sri Lanka. It is found in Burma, Sri Lanka, India, Taiwan, and southern and southwestern China. It grows up to 1,000 meters above sea level.

Golden shower trees are cultivated in the southern and southwestern provinces of China. In the southern part of China, it is also used as ornamental trees in courtyards and parks. The products are mainly produced in Taiwan, Fuzhou, Xiamen, Guangzhou, Haikou, Danxian, Guilin, Jingdong, Gengma, Shuangjiang, Menglian, Menghai, Jinghong, Mengmu and other places in Yunnan.

1) The bark of Golden shower tree contains tannin, which can extract red dye and be used for making leather and gum.

(2) Wood hard, shiny, beautiful texture, corrosion resistance;It can be used for bridges, pillars, vehicles, agricultural tools and so on.

(3) The young leaves of Golden shower tree contain vitamin C1228mg/100g, and the flowers contain 2352mg/100g (both fresh weight), which can be used as wild vegetables. Root, bark, Fruit pulp and seed can be used as anti-laxative, which has a good effect on the treatment of duodenal ulcer. 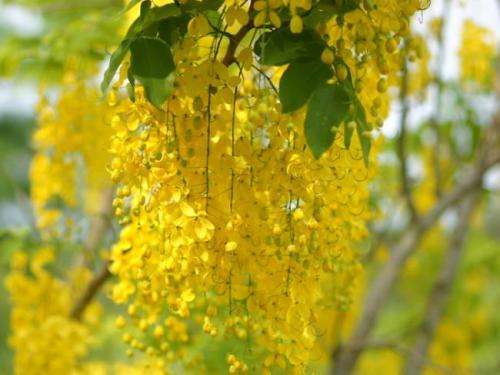