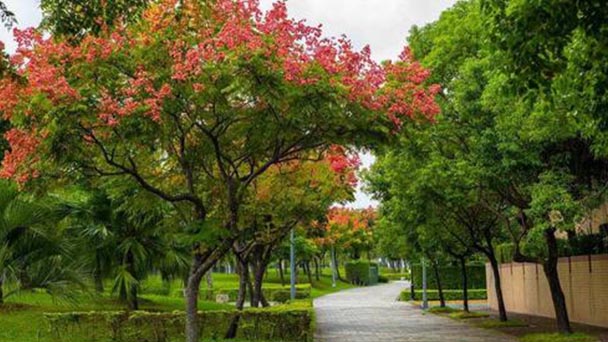 Golden raintree (Koelreuteria paniculata) is a family, Golden raintree plants. Golden raintree is a deciduous tree or shrubs; Bark is thick, grayish brown to grayish-black, longitudinal split when old; Lanceolae is small, gray to dark revealing; Branchlets are verrucose, pubescent or glabrous with leaf axes and petioles all wrinkled.

Golden raintree grows in calcium-based soil generated by limestone weathering and is cold-resistant. In China, it is only distributed in the lower reaches of the Yellow River Basin and the Yangtze River Basin, but rarely seen in the north of the Haihe River Basin, and can not grow in silicon-based acidic red soil areas. Golden Raintree sprouts late in spring and leaves early in autumn, so the annual growing period is short and the growth is slow. The wood can only be used to make some small utensils, and the seeds can be pressed into industrial oil. 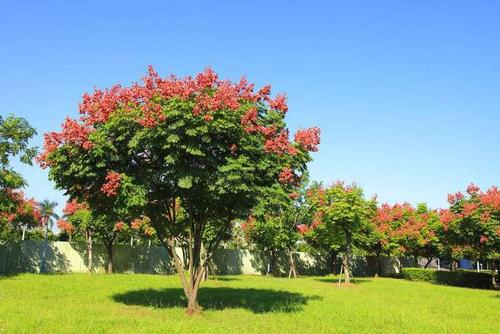 Golden raintree is deciduous tree or shrub; Bark is thick, grayish brown to grayish-black, longitudinal split when old; Lanceolae is small, gray to dark revealing; Branchlets are verrucose, pubescent or glabrous with leaf axes and petioles all wrinkled.

Golden Raintree leaves clustered on current branches, spreading, primary, incomplete biregurgous or occasionally biregurgous pinnately compound leaves, up to 50 cm long; Lobules are (7 -) 11 to 18 pieces (apical lobules sometimes with the upper pair under central Hopson), sessile or very short shank, opposite or alternate, papery, ovate, broadly ovate to lanceolate, oval (3 -) 5-10 cm long, 3-6 cm wide, apex acute or shortly acuminate, base obtuse to nearly cross-sectional shape, margin with irregular obtuse serrate, teeth end with a small point, it is sometimes basal teeth alienation incision or pinnate deep crack of rib and form 2 back to pinnate, above only on midrib, pubescent with wrinkling, below in vein axils with a beard, sometimes lobule on the back of the fuzz.

How to grow and care for golden raintree

The shading time and shading degree shall be determined according to the temperature and climatic conditions at that time and place, so as to ensure that the seedlings are not harmed by sunburn.In order to improve the degree of lignification of seedlings, the time and intensity of light should be gradually extended in autumn until full light is accepted.

When seedlings of golden raintree grow to 5 ~ 10cm high, they should be thinned. After thinning with a plant distance of 10 ~ 15cm, they should be combined with watering and topdressing, leaving about 12 seedlings per square meter. Thinning seedlings requires small to stay big, to leave bad to stay excellent, between dense to stay thin, equidistant whole seedlings, and in cloudy and rainy days as well. Combined with thinning, the missing plants were supplemented to ensure the uniform distribution of seedlings.

To often loosen the soil, weeding, watering, keep the bed wet, after falling leaves at the end of autumn, most of the seedlings can be as high as 2m, the diameter of about 2cm. The seedlings of golden raintree will be dug up and classified, and transplanted in the next spring. Before the transplantation, the roots will be cut a little shorter. After the transplantation, the seedlings will be cut off from the roots and stems, that is, the stubble will be leveled from the ground, and then irrigated. Sprout to often wipe the bud, leaving only the strongest bud culture into the trunk.Growing period often loose soil, weeding, watering, topdressing, to the autumn can develop straight trunk. 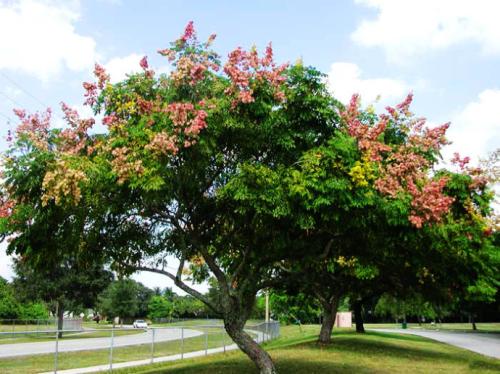 The root system of golden raintree seedlings can be developed by bud transplanting. The height of annual seedlings is 50 ~ 70cm. Golden Raintree is a deep-rooted tree, which should be transplanted many times to form a good and effective root system. Seedling in the autumn of that year after falling leaves can be dug up into the ditch planting, the next spring equinox.

Since the trunk of Golden Raintree is not easy to grow straight, it is necessary to cut off the stubble for the first time and strengthen the management of fertilizer and water. Spring sprouts from the base of the branch, chooses to stay straight, healthy culture into the trunk, then the trunk grows fast, straight. If the first truncation fails to meet the requirements, the next spring can be truncated again. After transplantation every 3 years or so, the main root and thick lateral root should be cut short to promote the new root. Golden Raintree saplings grow slowly, and the first two transplants should be properly planted close, which is conducive to cultivating straight trunks and saving land. Thereafter, the tree crown should be sparse and well cultivated.

Fertilization is an important measure to cultivate strong seedlings. Seedlings of golden raintree unearthed long roots, should be combined with watering and fertilizing. During the annual growth boom period, quick-acting fertilizer based on nitrogen should be applied to promote the vegetative growth of plants.In autumn, to stop applying nitrogen fertilizer, increase the application of phosphorus, potassium fertilizer, in order to improve the degree of lignification of plants, improve the cold resistance of seedlings. In winter, it is advisable to apply farm organic fertilizer as base fertilizer, which not only provides effective nutrients for seedling growth, but also plays the role of heat preservation and soil improvement. With the growth of seedlings, it is necessary to gradually increase the amount of fertilizer to meet the demand of seedling growth for nutrients. The first amount of topdressing should be less, 2500g to 3000g of nitrogen fertilizer per acre, and then apply fertilizer once every 15 days, and the amount of fertilizer can be slightly larger.

Generally, when the height of the golden raintree trunk reaches the height of the branching point, the main branches should be left for 3 to 4 years.If the one-year seedling does not dry straight or can not reach the standard of fixed dry, it should be re-cultured after cropping in the next year. Generally, after two transplants and culture for 3 to 6 years, the DBH can reach 4~8cm.

Full crown seedlings of golden raintree with dry diameter of 8~12cm were cultivated, and 160-170 golden raintrees were planted per mu, that is, the row spacing of plants was 2m×2m. Large seedlings with dry diameter above 12cm were cultivated, and 130 plants were planted per acre, i.e., row spacing of plants was 2m×2.5m. Combined with tending management, pruning dry shoots below 1.5m in height to promote trunk straight growth.

The crown of Golden Raintree is nearly spherical, and natural tree shape is generally adopted. Because of the use of different, its plastic requirements are also different. Street trees with seedlings require trunk straight, the height of the first branch is 2.5~3.5m, complete and plump crown, branches evenly distributed, developed. Court-shade trees require a large, dense crown, with the first branch lower in height than street trees. In the process of cultivation, the corresponding pruning measures should be taken according to the above requirements. This can generally be done in winter or during transplantation.

Golden Raintree fruit ripens in autumn. The fine single plant with good growth, straight dry shape, open crown, full fruit and strong age should be selected as the seed mother tree. The fruit should be collected in time when the fruit shows reddish-brown or orange color and the capsule has not yet dehisced, otherwise it will fall off by itself. But should not be picked too early, otherwise the seed germination rate is low.

After fruit collection, peel and stalk should be removed, and the fruit of golden raintree should be dried in the sun or spread out in the shade in time. When the capsule is dehiscent, the fruit should be beaten and threshed, and the seed should be cleared by screening method. The seed is black, round, the diameter is about 0.6cm, the seed rate is about 20%, the 1000-seed weight is about 150g, the germination rate is 60% ~ 80%.

The seed coat of Golden Raintree seeds is hard and not permeable to water. If it is not managed by accelerating germination, it often does not germinate or the germination rate is very low in the next spring sowing. So, in those days the autumn sows let the seed complete in the soil push bud stage, can leave out the procedure such as seed storage, push bud. After one winter, in the spring of the second year, the seedlings were unearthed early and neat, and grew strong.

Collection of cuttings: After the leaves of golden raintree in autumn, combined with the stubble of L-year young seedlings, the trunks with basal diameter of 0.5 ~ 2cm are collected as seed strips, or the dry and long branches of perennial Golden Raintree sprout seedlings are collected as seed strips, which are bundled while collecting. After finishing immediately with wet soil or wet sand buried, so that it does not lose moisture for cuttings.

Golden raintree can clear the liver and improve the eyes. The main eye is red and swollen and painful;More tears.

Garden use of golden raintree

Golden Raintree is cold and drought resistant, and is often cultivated as a garden ornamental tree.

In spring, the tender leaves of golden raintree are mostly red, and in summer, the trees are covered with yellow flowers. In autumn, the leaves turn yellow and the fruits are purple and red, shaped like lanterns, which are very beautiful. Golden Raintree has strong adaptability and obvious seasonal phases, and is an ideal tree for greening and foliage viewing.It is suitable for shade trees, street trees and garden trees. Golden raintree is also a good tree for planting in industrial polluted areas. Golden Raintree has been widely used as a shade tree, street tree and garden tree for leaf viewing in spring, flower viewing in summer and fruit viewing in autumn and winter. It is also used as a greening tree in residential areas, factories and villages. 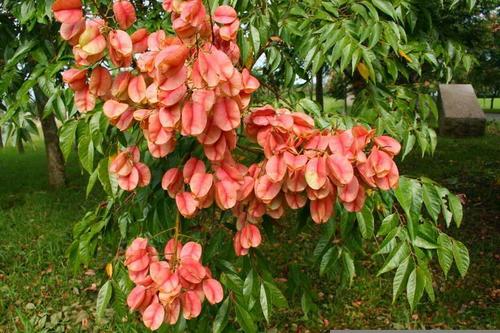