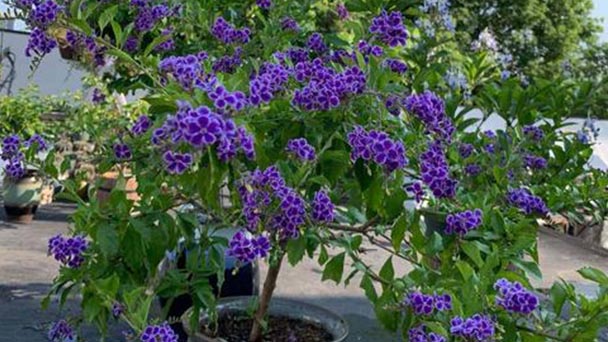 Golden Dewdrop, also called Duranta, is an evergreen shrub, and it is the cultivated species of Golden Dew. Golden dewdrop single leaf is opposite, long elliptic, the upper part of the leaf margin coarsely serrated, the lower part of the whole margin. Corolla is blue-purple, tubular, five-petaled.Drupe globose, orange when ripe. Horticultural cultivation, often planted for garden ornamental and hedge plants. Golden dewdrop is also a nectar plant for bees and butterflies. The fruit is poisonous.Ingestion can cause abdominal pain, diarrhea, fever, lethargy, cramps and other symptoms.

Golden dewdrop can blossom all the year round, in full bloom from spring to summer, the purple and blue petals beside the inlaid on the shallow pink purple wave, such as lace and edge, graceful flower appearance, beautiful as its name. The fruit, like a string of wind bells, is also a major feature of it, a green, makeup point on a string of orange red, letting a person have the feeling of pleasing the eye. 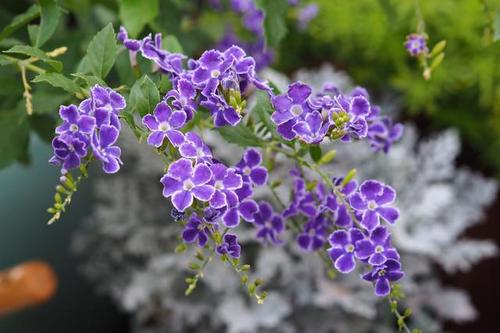 The axillary base of Golden Dewdrop is often sharp, the leaves are simple opposite, elliptic or obovate, 3.5~7.5 cm long and 2~4 cm wide, the apex is sharp, the base is broadly wedge-shaped, paper, and the whole margin or upper margin is serrated. The surface is glossy green, the back is light green; Surface smooth glabrous, back surface smooth glabrous or slightly scattered hairy;Middle rib slightly concave on surface and conspicuously raised on dorsal surface, lateral veins 4-7 on each side;Petiole 0.6 -- 1.2 cm long, smooth, glabrous, furrowed.

The flowers of golden dewdrop are mostly with a light milky fragrance and a lilac color with white rimming. When open, the diameter is 1-1.5 cm, and the racemes of terminal and axillary flowers are arranged in a conical shape. Inflorescences are 10 -- 20 cm long, hirsute; Flower stalk slender, 0.2~0.4 cm long; Calyx is cylindric, 0.3 -- 0.5 cm long, apex truncate with 5 chisel-shaped teeth; Corolla of Golden dewdrop is slightly curved, slightly pure, apex 5-lobed; Lobes of slightly inconsistent size; Golden dewdrop has 4 stamens, attached to the base of crown tube; Filaments are slender, hairy, anthers long ovate or elliptic; Ovary is globose, smooth glabrous; Style is slender, terete, stigma capitate.

The fruit of Golden Dewdrop is drupe, long ovate, large at the top, 5 ribbed processes, sharp near the stalk, 0.7-0.8cm in diameter and 1-1.2cm in length. When ripe, it is Golden yellow, with persistent calyx and clusters forming clusters. The apex of the seed nucleus is serrated, about 0.4 cm in diameter.

How to grow and care for golden dewdrop

1. Get plenty of light

Golden DewDrop likes to grow in a humid environment, so it needs to be watered in time to keep the soil moist. However, Golden DewDrop is not waterlogging resistant, so don't leave water when watering, otherwise it will rot the roots. It is suggested to master the principle of watering when dry and wet.

When it comes to how to raise Golden DewDrop, its demand for nutrients is relatively high, so it is necessary to fertile Golden DewDrop reasonably. During the growth period, fertilizer should be applied to the plant every half a month, but it is not advisable to overfertileit, otherwise it is easy to burn the root.

Golden dewdrop grows quickly. In the process of growth, it is necessary to properly prune its branches and cut off all the useless branches, which can not only reduce the consumption of soil, but also increase the ornamental value of the plant. 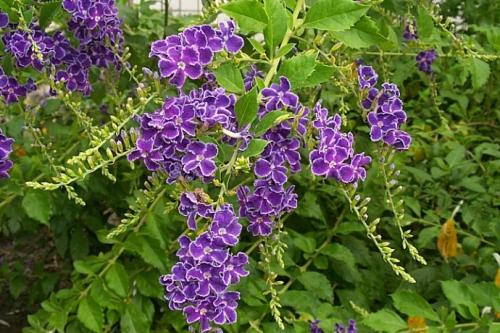 Gardening Golden DewDrops occasionally seed. But the main method of reproduction is cuttings. Besides cuttings, asexual propagation methods such as layering are also feasible.

Golden Dewdrop cutting is easy to take root. In the growth season, green branches and semi-mature branches are used, generally about 10cm branches are cut, and the top two leaves are left. The cutting substrate is used, and the root can be taken in two weeks under the condition of shading and moisturizing or all-light spray.

If Golden Dewdrop is needed as a hedge, the above cutting method can be adopted to rapidly propagate a large number of young seedlings.

The distribution area of golden dewdrop

Golden DewDrop is widely grown in Central America, Caribbean islands and northern countries of South America. It is widely planted and applied in tropical areas due to its strong adaptability and rapid and robust growth.

Garden use of golden dewdrop 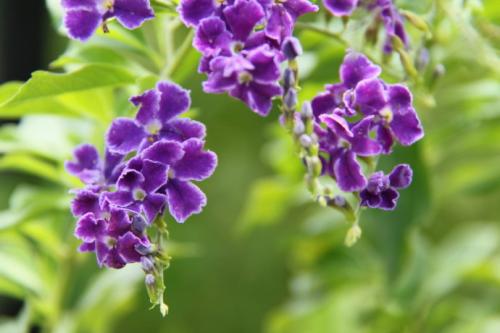