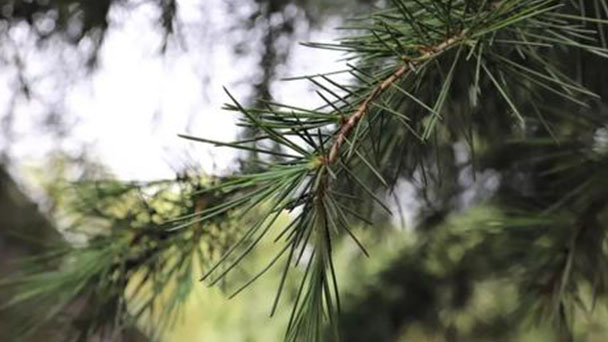 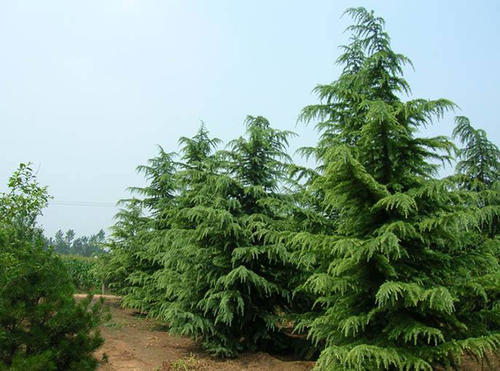 Deodar cedar branches radiation, extend the lobe of short shoot clusters form (about 15-20) every year bring forth new leaves, leaf needle, hard, light green or dark green, 2.5 5 cm long, 1-1.5 mm wide, upper wide, apex lancet, lower gradually narrow, often into three rhombus, thin back, leaves on both sides of the front of each have 2-3 stomatal lines, on the back of the 4-6, stomatal lines at a young age with white powder. Male cones of deodar cedar are ovoid or ellipsoid-ovoid, 2 -- 3 cm long, ca. 1 cm in diameter; The female cones are ovoid, ca. 8 mm long and 5 mm in diameter.

Deodar cedar originates in the Himalayas region, widely distributed in Bhutan, Nepal, India and Afghanistan and other countries, vertical distribution of the altitude of 1300-3300 meters.

Deodar cedar soil requirement is not strict, the acid soil, slightly alkaline soil can adapt, the deep fertile loose soil is the most suitable for its growth, and can also adapt to the sticky heavy loess and barren arid land.

Deodar cedar is drought resistant, not resistant to moisture. Shallow root, poor wind resistance. They are less resistant to SO2, and high concentrations of SO2 in the air tend to kill plants, especially when new leaves emerge in April and May. Most Deodar cedar are male-female odors. In addition, the flowering period is not met, so the natural pollination effect is poor. In order to obtain full seeds, artificial pollination is needed.

The propagation of Deodar cedar

Deodar cedar is generally propagated by sowing and cutting.

Deodar cedar sowing can be done in mid - to late March with a seeding rate of 75 kg/ha. Sowing can also be done earlier to increase the resistance of the seedlings. The sandy loam with good drainage and ventilation was selected as the seedbed.

Before sowing Deodar cedar, soak seeds in cold water for 1 -- 2 days, dry them and sow them. After 3 -- 5 days, they start to germinate. It lasts for about 1 month and the germination rate reaches 90%. We should pay attention to shading in the seedling stage, and prevent cataplexy and the harm of ground tiger. Annual seedlings can be 30 to 40 cm tall and can be transplanted in the spring of the following year. Cuttage propagation can be carried out in spring and summer. In spring, it should be before March 20, and in summer, it is better to take late July.

In spring, cutting thick annual branches of young mother Deodar cedar and treating them with root powder or more than 500 mg/l naphthalene acetic acid can promote rooting. It is then inserted in a well ventilated sandy loam, watered thoroughly and shaded by a double shade shade. In summer, it is advisable to select the semi-lignified branches of the same year as cuttings. In addition to strengthening shade management, plastic film should be covered to maintain humidity. After 30 -- 50 days of insertion, callus can be formed, at which point extracorporeal fertilization can be performed with a solution of 0.2% urea and 0.1% potassium dihydrogen phosphate.

Breeding seedlings of Deodar cedar stay in bed for 1-2 years, and can be transplanted. The transplant can take place in February or March. Deodar cedar should be with earthen balls and stand poles. Plant row spacing from 50 cm to 200 cm, gradually increases. Growing season top dressing 2-3 times, generally do not have to reshape and pruning, only thinning disease dead branches and crown close Yin Sheng weak branches can be. It can spray benzoate or daisen zinc to prevent and control gray mold, spray dimethyl oxide, trichlorfon to prevent and control scale and moth and butterfly insect pests.

It can adapt to all kinds of soil, and can also grow on heavy clay loess and barren arid land. But in seeper depression or groundwater level too high, poor growth, and even death, shallow root tree species. Be easily blown down by the wind. Young leaves are extremely sensitive to sulfur dioxide and have very weak resistance to smoke damage.Young seedlings grow slowly.Usually the male plants bloom after 20 years of age. The female Deodar cedar does not flower and seed until 30 years later. Because the flowering period is different, the natural pollination effect is poor. Usually, it is necessary to collect and store pollen in advance, and carry out artificial pollination when the female flowers are mature, so as to obtain more high-quality seeds. It is generally propagated by sowing or cutting. Sowing of Deodar cedar can be carried out in late March, sowing amount per acre of 5 kilograms or so.The germination was unearthed about 15 days later.The young plants need a shed for shade.Cuttings are generally in spring and autumn two seasons.

How to grow and care for Deodar cedar

A planting web page with full solar is first-class for this evergreen tree, although it can tolerate partial shade.

Deodar cedar timber can be grown in a vast range of soil types, inclusive of loam, sand, and clay, as lengthy as that soil is well-drained.

Give the tree masses of water all through the first few developing seasons. Once established, deodar cedars are quite drought-resistant. Check to make certain that your soil provides proper drainage due to the fact this species likes moist soil however can't tolerate moist feet.

Of all the cedar trees, the deodar cedar has the great tolerance for warmth and humidity.

Fertilize the floor round the tree in the spring months earlier than new increase begins. Don't fertilize the cedar extra than as soon as per year, as too much nitrogen can cause root burn.

Deodar cedar is a low-maintenance tree. The sole pruning that is commonly wished is to dispose of any branches that have come to be dead, damaged, or diseased earlier than the new boom starts in the spring. If you want to prune, take intense care—it's convenient to reduce away too a great deal of the inexperienced that may not develop back, which may want to lead to the tree's death. 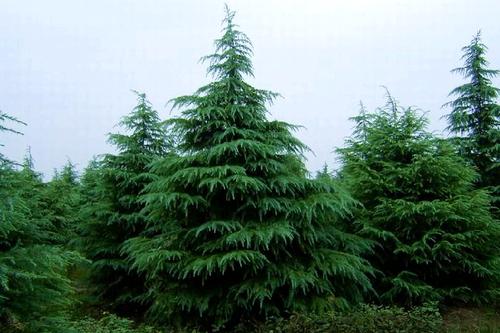 C. deodara 'Golden Horizon': A dwarf range that grows shortly however solely up to 10 toes tall and has golden needles that flip yellow-green in the summer

Gray mould mainly affects the young shoots and twigs of Deodar cedar. It can be strictly divided into the following types:

Ulcerative type: mainly damaging the tender shoots of Deodar cedar. In the early stage, light brown round and nearly round irregular small spots appeared at the base of the young shoot, and then gradually expanded into a serious disease spot in the middle of the lower concave. In the early stage of the lower concave, dark brown water stain rotted.After the disease healed, the rotted epidermis was dry and cracked.

Branchlets of Deodar cedar die mainly on biennial branchlets. The spot develops mainly from dead shoots. At the beginning, a ring of reddish brown depression was formed at the junction of shoot and twig, and then obvious disease spots were gradually formed. The disease spots did not crack and a small amount of resin spilled out. The surface layer of cortex and xylem showed dark brown. The diseased spots extended to the twig for a week, and the upper part of the twig died. The occurrence and prevalence of the disease are closely related to climatic conditions.

① Deodar cedar should be planted in a place with good drainage, ventilation and light, and should not be too dense when planting.

② The dead and dead shoots should be cut off and destroyed in time.

The pathogenesis of Deodar cedar leaf blight is characterized by mycelium (or ascomycte), which forms ascomycte in March-April of the following year after overwintering in the infected needles, and the ascomycte holds mature gradually in April-May. In rainy days or wet and astringent conditions, because of the sac disc water swelling and open, exposing milky sac group; The sac is extruded from the sac and further propagated by air. The pathogen was invaded by the stomata of Deodar cedar leaves, and it took about two months before obvious symptoms appeared. Since the meristem embrycer produced in the meristem embrace had poor germination and no infection power, no reinfection occurred. But because of the long radiation time of the sac bun, up to about 3 months, from spring to summer there may be a new infection. During the dispersal of the ascomycas, if precipitation is high, humidity is favorable for invasion. Drought woodland, weak soil, exposure to pests and diseases in Deodar cedar and poor management may contribute to the occurrence of the disease.

(2) In small plantations and Deodar cedar nursery, the diseased leaves were removed before the dispersal of ascomycas to reduce the source of infection.

The distribution area of Deodar cedar

Deodar cedar is native to western Himalayas from Afghanistan to India between 1300--3300 m; Introduced in China since 1920, it is now cultivated in the major cities along the Yangtze River. Deodar cedar in Qingdao, Xi 'an, Kunming, Beijing, Zhengzhou, Shanghai, Nanjing and other places can grow well

Deodar cedar wood is soft and light, resin and not susceptible to moisture. It is an important building material in its origin.

The use of medicine for healing has a long history, dating back as far as biblical times. The ancient Egyptians added Deodar cedar oil to their cosmetics for beauty and also used it as an insect repellent. Native Americans also used Deodar cedar as a sacred substance for healing and purification rituals. Distilled and available as an aromatic oil, Deodar Cedar's various benefits make it an excellent treatment for dandruff and rashes.

Garden use of Deodar Cedar

Deodar cedar is one of the most famous ornamental trees in the world. It has strong dust-proof, noise reduction and sterilization ability, but also suitable for industrial and mining enterprises green tree species. Tall and graceful, deodar cedar trees are ideal for solitary placement in the middle of lawns, in the center of a building's front yard, in the center of a square or on either side of a main building or at the entrance to a garden gate. The trunk of the lower part of the branches from near the ground flat, not withered, can form a lush majestic canopy, in addition, planted on both sides of the garden road, the formation of the corridor, is also very spectacular.

Deodar cedar is a world famous ornamental tree with its tall and graceful shape. It is considered sacred by the people of India. 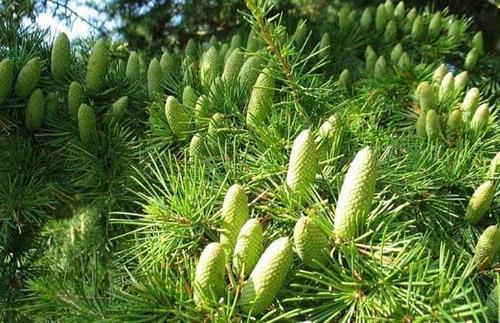 How to grow and care for Deodar cedar