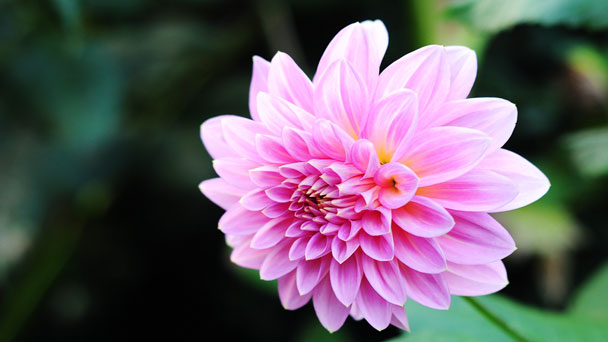 Dahlias grow from tubers. Plant Dahlias tubers in the spring at about the same time as planting the vegetable garden, or when the ground is warm enough to plant and play daily. Plant them in a sunny place and they will bloom throughout the summer. They will bloom, providing you with colorful and rich flowers to cut and enjoy throughout the summer.
Dahlias PictureDahlias InfoHistoryDahlias DistributionHow to Grow & Care for DahliasHow to Grow DahliasHow to Care for DahliasUses of DahliasVarieties of DahliasDahlias Common Pests/DiseasesOverwintering DahliasStaking DahliasDahlias Design Tips 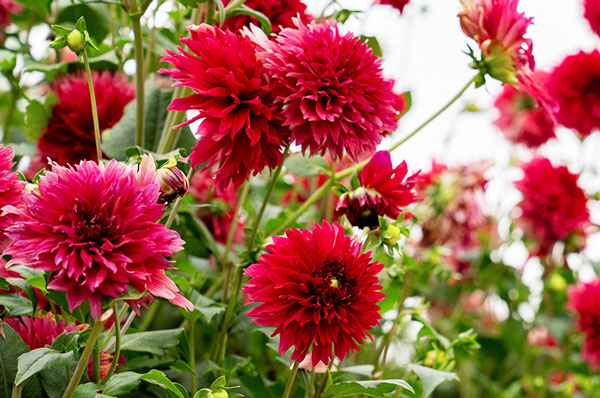 Dahlias are originated in Central America and are inherent from Mexico to Costa Rica. Flowers were known to the Toltecs. In about 1550, an Aztec herbal written in Latin was rediscovered in 1929 and it showed an evidence of the use of Dahlia for treating epilepsy.
Spanish adventurers took the plant back to Europe by more than 200 years ago. At the Botanical Gardens in Madrid, the Abbe Cavanille named the genus “Dahlia” for Andreas Dahl, a noted Swedish botanist and student of Carl Linnaeus.
Currently, there are 35 species which is being recognized. First species were Dahlia pinnata, D. coccinea and D. rosea. Dahlia being a natural hybrid, developing new varieties from the original simple blooms to a wide range of single and double-flowered blossoms in a saturated bright colors and various shapes which has been easy.
During 1800s, the popularity of Dahlia raised, numerous varieties emerged and were recorded. After the brief amour, the use of dahlia tubers as food crop for supplementation of potatoes, it was decided that it is better suited for decoration than food. 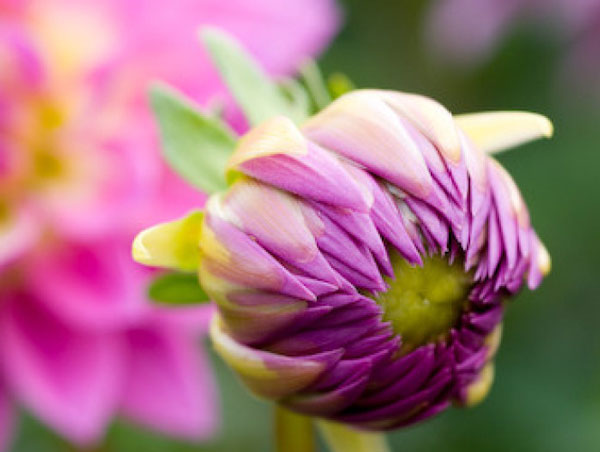 Dahlias are native to Mexico where they have been grown for centuries. From there they made their way to Spain via conquistadors who sent seeds of the Flower to Madrid along with other seeds of plants and vegetables they had found growing during their explorations. The Dahlia was given its name by botanist and director of the Royal Gardens of Madrid Antonio José Cavanilles, who named the flower after another botanist, Andres Dahl. Dahlias soon spread across Europe and from Mexico to the United States during which time they became an immensely popular garden flower worldwide. 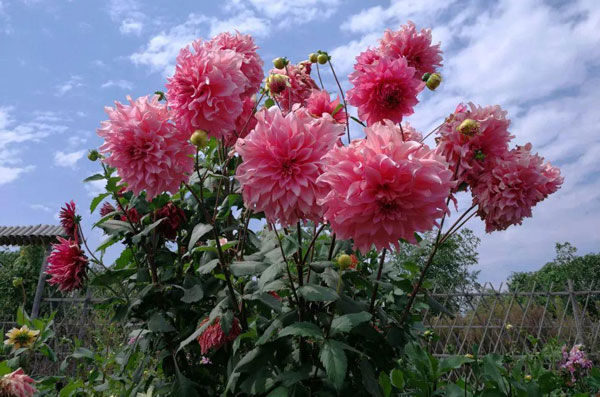 How to Grow & Care for Dahlias

How to Grow Dahlias

Dahlias can be propagated from seeds, tubers, or cuttings. Dahlias are commonly started into growth as tubers, but it is possible to grow dahlias from seed. Dahlia seeds should be sown between February and April undercover. Sow 0.5cm deep in trays of moist compost. Place in a warm position, about 15-20°C (60-68°F). Keep moist. Transplant seedlings to deeper trays or individual small pots when large enough to handle. Success with cuttings depends largely upon the proper manipulation of three environmental conditions: humidity, temperature and day length
After the cuttings have been dipped in rooting hormone and placed in the rooting medium (either sterile soil or sterile rooting cubes) they should be placed in a humid environment until well rooted. The humidity should be high enough to keep the cuttings from wilting, but not so great as to add moisture to the rooting medium.
Dahlias are photosensitive, and this fact is often overlooked in the process of taking cuttings. Most varieties of dahlias will develop tubers when the day length is 12 hours or less, and will develop feeder roots when the day length is longer than 12 hours. In early April, you can put all of your tubers in a large, shallow tray, lightly covered with compost, for potting up a little later. Alternatively, pot each tuber up individually, in a large plastic pot filled with multi-purpose potting compost. Position the tuber the right way up (look for the old stem, or a new shoot – this is the top) and position it so that it sits just below the soil surface. Water in well, allowing any excess water to drain away. Put the tubers in a light, frost-free place (such as a greenhouse, cold frame, porch or windowsill) and keep the compost moist. New shoots should start to form about five weeks after planting. They will have formed bushy plants by the time the frosts have ended in May.

How to Care for Dahlias

In order to flower well, dahlias need full sun, preferably at least six to eight hours a day. Before planting, improve the soil by digging in well-rotted organic matter such as compost, leaf mould and manure. Stake tall growers at planting so you don't damage the tuber. As with most plants, watering amounts and frequency vary depending on soil, weather, and plant size. In general, don't water tubers until they sprout above the ground, then water about two times a week. Luckily dahlias are not demanding. Recommend using a balanced fertilizer (10-10-10 or 15-15-15) and feeding the plants once per year. Remove the outer two buds from the three that develop at the end of each branch. While that reduces the total number of flowers, many flowers remain and those show up well on the plant. If all three buds are left on the stem, the blooms will tend to be covered up and can be lost in the plant. You can also remove some of the shoots that form along the branch to have stems that can be used in tall vases for elegant bouquets. 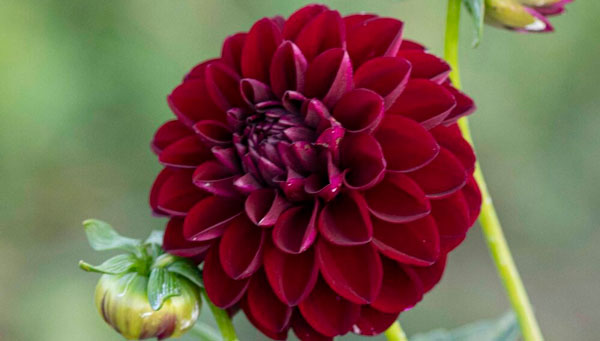 In Pre-Spanish Mexico, tubers were used due to high content of fructose and inulin.
Petals and tubers were used by Aztecs for treating infected grazes, rashes and cracks in skin.
Tubers skin is rich in antibiotic compounds.
The crushed and mashed up petals are used to provide relief from stings or insect bites.
Use poultice made from petals over insect stings and inflamed skin areas.
Use the petals in footsoak to soothe tired feet.
Place the crushed petals on itchy sore spot.
Aztecs use the flowers to treat epilepsy. 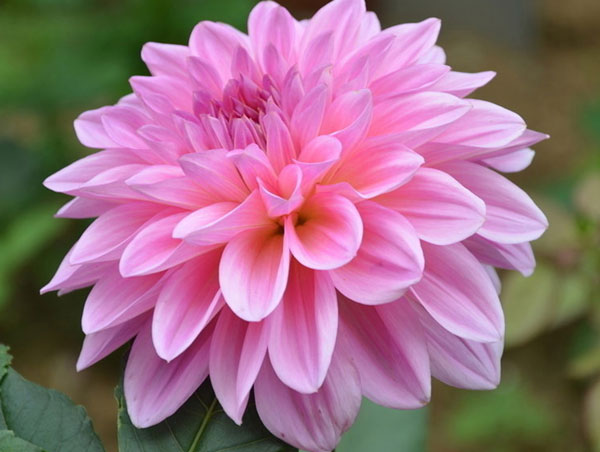 Some of the pests you need to be on the lookout for include aphids, slugs, snails, borers, leafhoppers, and spider mites. If you find any of these, these tips will help you get rid of them. Spray them with insecticidal soap or neem oil extract.
Slugs: Nothing is more disgusting than the sight of a slimy trail on your beautiful leaves or even the ground surrounding your plants, so you might want to keep some slug and snail bait on hand at all times. If you see the slime, you know they are around somewhere and if so, they can destroy your beautiful garden. Some signs that borers are present include stems that show breakage or wilting. Keeping weeds away from your plants should deter them, but if they've already affected your plants, cut off and destroy stems that have been larvae-infested.
Leafhoppers: These plant-feeding pests can destroy the look of your beautiful plant, so if you see signs of them, begin spraying (about every five days) a mix of a pint of insecticidal soap and a tablespoon of isopropyl alcohol. Look for these pests on the underside of leaves. If you find them, wipe down the leaves with a sponge soaked in plain water or spray with Neem. You can also spray the leaves with a mixture of water and mild dishwashing soap if you prefer. 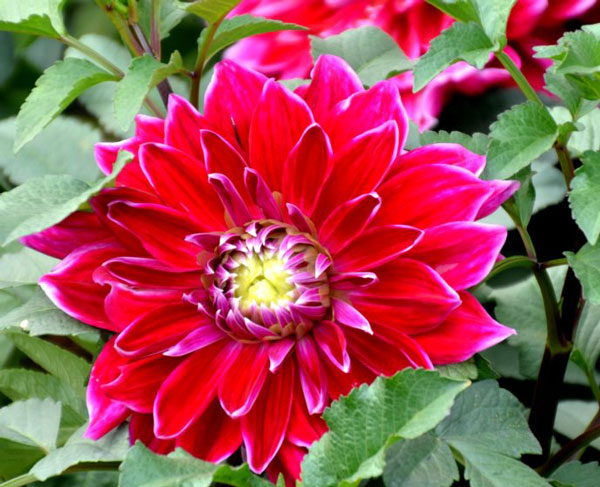 Dahlias are generally not very frost hardy. After the first autumn frosts have blackened the foliage, cut back the stems to around 10-15cm (4-6in) from the ground.
In mild regions and on well-drained soils, you can usually leave the tubers in the ground and cover with a 7.5-15cm (3-6in) deep layer of bark to protect the tubers from frost. In colder areas or on heavy soils, it is far safer to lift and store the tubers for replanting the following spring.
Carefully lift the tubers out of the ground with a garden fork.
Allow them to dry for a few days, so you can clean away any soil clinging to them, preferably upside down in a cool place to allow any moisture in the stems to drain out.
Trim off any fine and damaged roots.
Place the tubers in shallow boxes or trays and pack around them with a peat-free compost or dry sand, just covering the tubers but leaving the crown (where the stems join the tubers) exposed.
Store in a cool, dry, frost-free place over winter.
Inspect the tubers regularly for rotting and discard any that are unhealthy or damaged. (Find more fall flowers here.)

If you're growing big dahlia plants, staking will be important. We recommend being pro-active, and setting up your stakes when you plant your Dahlia tubers. The beautiful foliage grows on somewhat brittle stems, and heavy rain, wind, or even the weight of the flowers once they've opened can break the plant. You don't want that to happen, especially at bloom time!
Set one or two stout stakes beside each tuber after you plant them. Wooden stakes can be buried or hammered in. Metal stakes can be placed in the soil more easily and are a great option if you find that your Dahlias need a little extra support after they've grown in.
Have the twine or 'twist-ems' ready to support the stems as they grow. With a little effort, the stakes will be completely hidden by the leaves, but you will thank yourself when your big, beautiful flowers a growing with support. 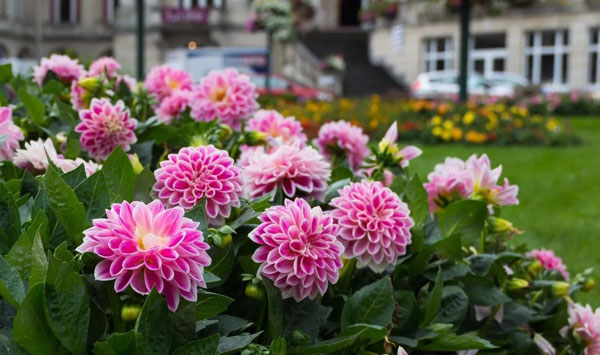 There are many ways to use dahlias in the garden. Here are a few tips and suggestions:
Their lower stems tend to be unattractive and the plants are heavy (especially the large flowered dinnerplate types); so without staking, they tend to flop. Distributing them amongst other plants helps support their weight and also hide their lower stems.
Taller varieties will grow well with perennials and ornamental grasses toward the rear or center of borders, while shorter dahlias mix well with annuals or shorter perennials.
Plant the smallest varieties in containers.
Dahlia flowers are brightly colored, so think about what other flower or foliage colors there are in the landscape, as the dahlias will pick these up and echo them loudly.
Match with other late-flowering perennials, particularly those with similar color, but different texture; such as yellow dahlias and fluffy goldenrods, or purple dahlias and asters.
They can also look surprisingly good with grasses, as the contrast is total—big bright flowers against finely textured grasses.
In more formal settings, their strong colors can be enhanced by the crisp foliage of clipped hedges.
Good cutting dahlias tend to be the larger varieties because of their longer stems.
However they are used, dahlias will be in their full glory by September, and help the summer garden end on a high note.
Read Next:
Top 10 Most Beautiful Roses in the World
Top 10 Most Beautiful Flowers in the World
26 Best Autumn Flowers to Plant for Fall Color in Garden
Top 30 Fall Flowers to Plant Beautiful Autumn Flowers

How to Grow & Care for Dahlias Flower