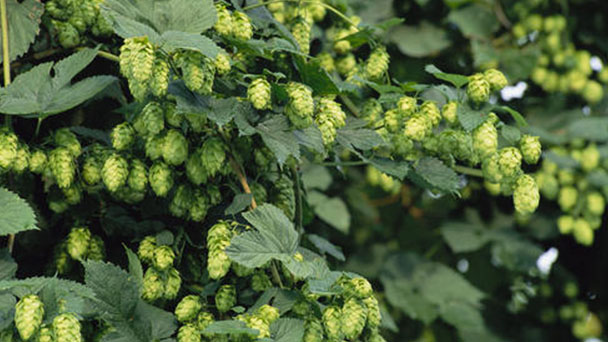 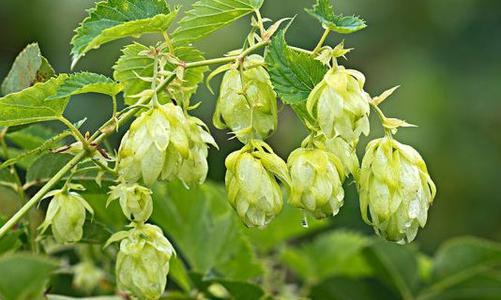 Common Hop (Humulus lupulus) is a perennial vine with persistent roots that alternate annually above ground. Strong growth capacity can grow to nearly 10 meters in a growing season. In winter, the aboveground parts die, while the underground roots survive the winter. In the spring of the following year, Common Hop sprouts and grows from underground roots.

Leaves are opposite, leaves ovate or broadly ovate, apex acute, base cordate or suborbicular, undivided or 3-5-lobed, margin coarsely serrate. The leaf surface is mostly glabrous, leaf back veins sparsely hairy, yellow glandular points. The petiole is usually shorter than the blade. Leaves are slightly hairy, with a pair of triangular stipules at the nodes that eventually disappear as the vine ages. Stems are much branched, initially green to reddish brown. Stems and petioles have scattered downward barbs that grip trees or other objects to allow vines to climb upward.

Common Hops (Humulus lupulus) are dioecious plants, and male hops are rare in the wild. There are exceptions that are monoecious, but the male flowers are sterile. Male flowers are longer than the axils of upper branches, a cluster of 20 to 100+ flowers. Male flowers have 5 perianth segments, 5 short stamens. They soon become brown and wither after flowering. Flowering period is from July to August.

Female flowers are born in the axils of leaves and shoot tips of stem tips, female flowers every 2 in a bract axils, bracts were imbricate arranged into a nearly spherical spike. The ear is ovoid; Pedicels are slender, ca. 3 cm x. 2 cm, glabrous, bracts obtuse, with yellow oily spots at base. The "petals" we see in the imbricate arrangement are persistent, enlarged bracts at the Fruit 'stage, and are not petals, but metamorphosed leaves. The achene is flat, each bract axils 1~2 internal.

Common Hop (Humulus lupulus) likes cold, cold resistant and fear of heat, suitable temperature for growth of 14 ~ 25℃, the requirement of frost-free period of about 120 days. Common Hop is a lng - day plants, light - loving, annual sunshine hours need 1700 ~ 2600 hours. Do not choose the soil, but with a deep soil layer, loose, fertile, good aeration loam is appropriate, neutral or slightly alkaline soil. Spices are ellipsoid, 2.5 -- 3cm long, 1.5 -- 2.5cm in diameter. Bracts are imbricate, ca. 45, many scattered, broadly ovate or ovate-lanceolate, apically obtuse, a few acuminate, base curled. The surface is brown or brownish red, the veins on the inner surface are obviously raised, the base is wrapped with a fruit, like spherical, the surface is longitudinally curved, the tip is mucronate; Red powdery particles are attached to the base of the outer surface. 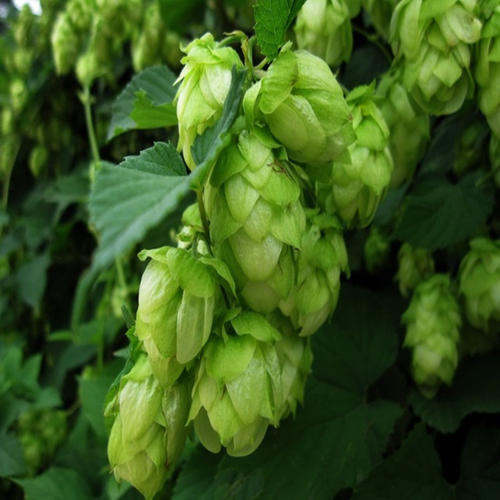 The main value of Common Hop

Common Hop (Humulus lupulus) is used for climbing plants or hedgerows. Female inflorescences can be dried. Flowers are the raw material for brewing beer. 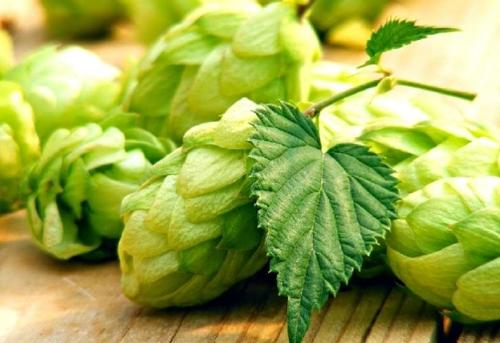 How to grow and care for Common hop