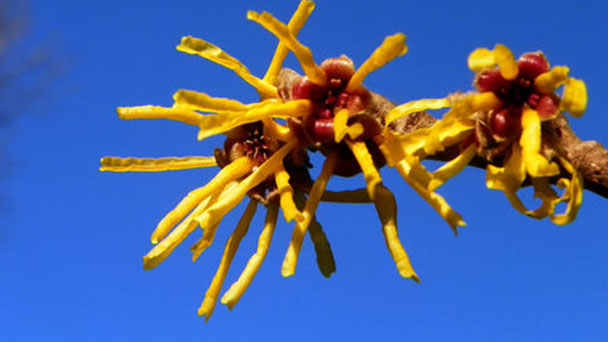 Chinese Witch Hazel, scientific name Hamamelis mollis, is a deciduous shrub or small tree with a height of 8 meters, belonging to the order Rosa, family Chinese Witch Hazel. Shoots are with stellate tomentose; Old branches are bare and clean. 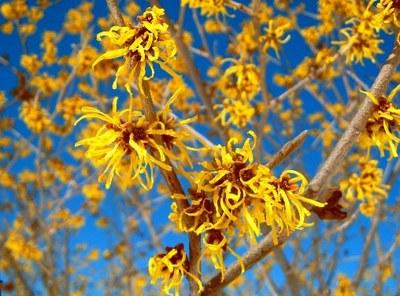 Chinese witch hazel is a deciduous shrub or small tree, up to 8 m high; Shoots are with stellate tomentose; Old branches are bare and clean; The sprouts are long and ovate, with grayish-yellow hairs. Leaves of chinese witch hazel are papery or thinly leathery, broadly obovate, 8-15 cm long and 6-10 cm wide, apex short and acute, base unevenly coordinate, upper slightly coarse, with sparse stellate hairs, not shiny, and densely gray stellate hairs below; Lateral veins are 6-8 pairs, the lowest pair of lateral veins having a distinct second lateral vein, prominent above and protruding below; Margin undulates obtuse teeth; Petiole is 6-10 mm long, tomentose, stipules caducous.

The capsule of Chinese witch hazel is ovoid, 1.2 cm long and 1 cm wide, densely covered with yellowish-brown starlike villi, calyx tube about 1/3 of the length of the capsule. Seeds are elliptic, ca. 8 mm long, black, shiny.

Chinese witch hazel is mostly born on hillsides, valleys, broad-leaved forest margins and shrubs. Alpine tree species, vertical distribution often in the elevation of 600~1600 meters. Chinese Witch Hazel is a warm-ground tree. Chinese witch hazel has strong cold resistance and can grow in the open field at -15℃. They are fond of light but are more tolerant to shade in early childhood. It can grow in half-shade conditions. The soil requirements are not strict, in the acid, neutral soil can grow. Especially with fertile, moist, loose, and good drainage sandy soil growth.

How to grow and care for Chinese witch hazel

However, in summer, shading treatment should be carried out for Chinese Witch Hazel to avoid sunburn by strong light in summer. 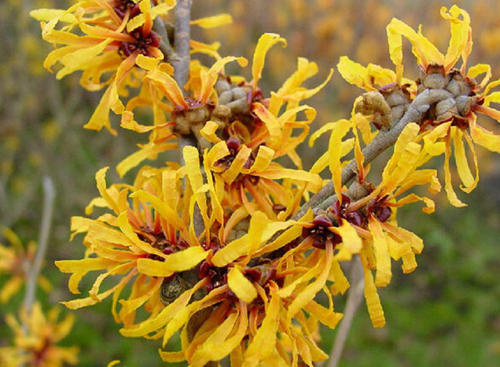 Chinese Witch Hazel is commonly used for sowing and cutting propagation. Sow, collect seeds in autumn, store them indoors, sow seeds in the next spring, and germinate in about 20 days. Cutting, with the best plum rain season, the use of mature branches 10 cm long, inserted into the sand bowl, shading water, inserted after 30~40 days to root.

Diseases are leaf spot disease and anthrax, which can be used 65% of the Zinc WP 600 times the spray liquid. In addition, it can be sprayed with 10% Dichlorothrin Emulsion 2000 times liquid to kill the moth and leaf rolling moth. Often have large demoiselle moth, moth, adult to light trap kill, larval period to trichlorfon liquid spray kill.

Chinese Witch Hazel is often caused by large demoiselle moths and acanthosis moths. Adults are killed by light traps and larvae are sprayed with trichlorfon liquid.

Chinese Witch Hazel is a large deciduous shrub. The stem grows from the base of the plant and the branches are densely grown. The plant can grow up to six meters high, with a few individuals sometimes growing to about ten meters. The bark is light brown, the surface is smooth, the bark is a scaly crack when exfoliate is scaly, the endothelium is red-purple. New branches at the beginning of the birth of pubescent, then become smooth hairless, at this time the branch surface is pale orange-brown, and branches above the scattered with some white dots, the last branches into dark brown or reddish-brown. Leaf buds acute, slightly curved sickle-shaped apex, the surface of a fine hair, leaf buds light brown.

Leaves broadly elliptic, 3.7-16.7 cm long, 2.5-13 cm wide, oblique at the base, asymmetrical on both sides of the base, acute or rounded at the tip, undulate dentate at the margin or shallowly lobed, short and stout petiole, 0.6-1.5 cm long, thick and hairy main veins from the main veins, lateral veins of six to seven pairs. Young leaves are enveloping and curling in the bud, mature leaves are dark green on the surface and lighter on the back, turning yellow in autumn with reddish-brown spots.

Stipules lanceolate, acute, falling off soon after the leaf has unfolded. The flowers are pale yellow to bright yellow, sparse orange or red, with four ribbon-shaped petals, 1 -- 2 cm long, with four short stamens. The flowering period lasts from mid-autumn to late autumn. Calyx deeply lobed, in four segments, hairy outside, orange-brown inside, calyx persistent, bearing at the base of the ovary.

Chinese Witch Hazel is a native species in East China and a national first-class protected tree species. The ancient plant is contemporary with dinosaurs, deciduous trees, up to 8m tall, diameter at breast height up to 40cm. The trunk is twisted and uneven, and the bark is peeling off in irregular sheets. Chinese witch hazel is produced in Zhejiang, Jiangsu and Anhui provinces.

East China special species, national first-class protected tree species. The ancient plants contemporary with dinosaurs are of great value for the study of the East Asian and North American flora and the phylogeny of the Chinese Witch Hazel family.

Garden use of Chinese witch hazel

The flowers of Chinese Witch Hazel are peculiar and fragrant. The leaves of the grass open before spring. The yellow slender petals are like a wisp of gold. Garden often cultivated at home and abroad, and some good varieties appear, is one of the famous ornamental flowers. In the corner of the courtyard, the pool, streamside, between the rocks and trees are very suitable. In addition, flower branches can be cut vase insert material. If you want to urge flowers, the branches will be cut off the bottle between December and January of the next year in a greenhouse at about 20℃, about 10-20 days can be flowering. 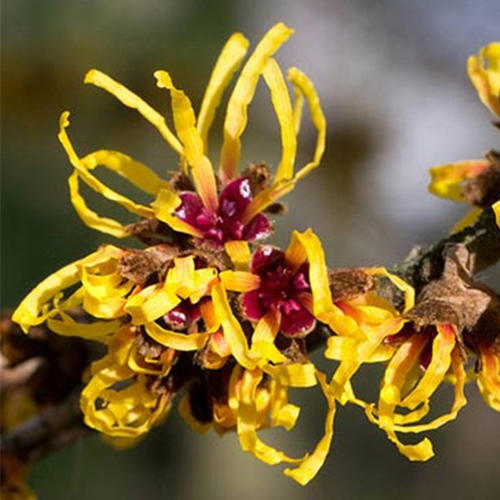