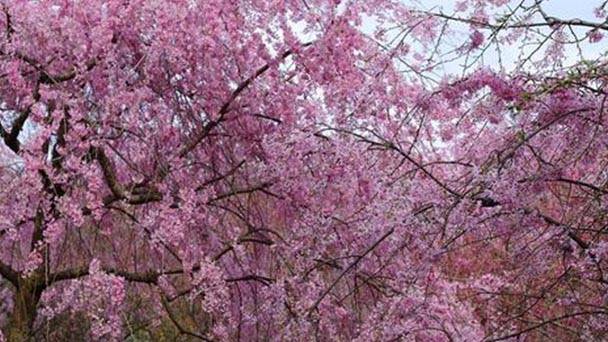 The Cherry Blossom Festival is celebrated in Japan from March 15 to April 15 each year. There are only seven days for cherry blossoms from blooming to dying, so there is also the saying of cherry blossom seven days.

This is the cherry blossom season in Japan from the south to the north, people put on a sumptuous feast under the cherry trees, or family reunion, or invite a few friends, while reciting poetry or painting, while drinking, get drunk.

When flowering, the petals turn downward in the shape of a bell. In addition, when Prunus campanulata blooms, they secrete honey, which attracts many butterflies to spread pollen. This kind of cherry blossom is not only found in Japan but also in southern China and Taiwan. They grow abundantly in the warmer parts of Japan, but there are people who say that the cherry blossoms in Okinawa are wild.Flowering from late January to early February (Okinawa), mid-March (Tokyo). 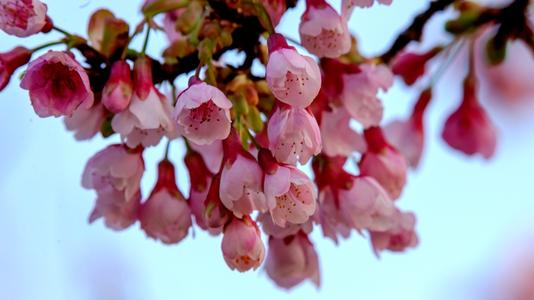 The flowers are small in size and have one layer of deep red and purple petals. The Rock-Splitting Cherry Tree can be found from the mainland to Taiwan. The flowers are in the shape of a fishing bell.

Put flowers and leaves together. The buds are purplish red, the pistils are not exposed at the bud stage, and the flowers are purplish red. The petals are 15 to 17, and the stamens are often L ~ 2. The petals tip is concave, and the Flower diameter is 2.4 ~ 3.0 cm.Pistils 1 to 2, stamens scattered, all shorter than petals, filaments light purplish red;Calyx flat cylindric glabrous, dark purplish brown, 5 pieces, apex slightly acute, some curved downward, another often 1 calyx valve. Pedicels 1.4 -- 1.6 cm long;Flowers L ~ 3 a bunch, more than 2 a bunch; Wuhan 3 in early bloom, flowering about 20 days. 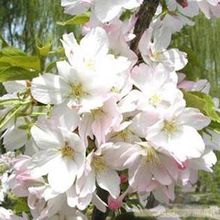 The cherry blossoms get their name because of their abundance on Izu Oshima.

The Rock-Splitting Cherry Tree has a strong resistance to sea breezes and grows early.

There are no hairs on the flowers and leaves, and there is a delicate fragrance when flowering. The petals are about 2cm long and the leaves 8 -- 13cm long. The white flowers set off beautifully with the pale green leaves.

The leaves are also used to wrap sakura cakes. 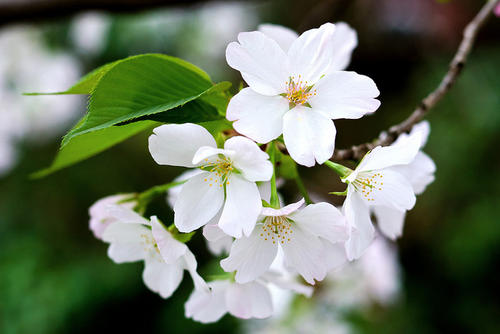 The color of the Prunus serrulata is white and purple, and the buds are purple, brown and yellow-green. The color and leaf bud hue set off, there is a very elegant temperament. Because of their longevity, many of the trees that have grown into trees have been designated as natural monuments everywhere. Mainly distributed in the southern half of Japan, mostly in mountainous areas. Flowering from mid-March to late March (Kagoshima), from early to mid-April (Kyoto, Tokyo), and late April (Matsushima).

The flowers and leaves grow together. Since ancient times, Prunus serrulata has grown naturally in the mountains. In the past, the Japanese people appreciated the cherry blossoms in the mountains.Yamakura in Yoshino Mountain in Nara Prefecture is the most famous.

Prunus serrulata is a type of wild cherry blossom in Japan. It grows mainly in the mountains and has small, pale pink, five-petaled flowers. 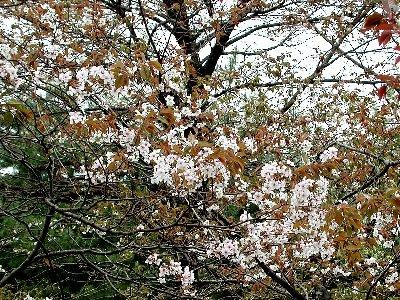 In addition to Kyushu, North japanese hill cherries are distributed in the Japanese archipelago.

North japanese hill cherries are suitable for the cold zone, so in Hokkaido and northeast more places, Kanto region, such as sunlight also has a lot.

Like Prunus serrulata, the back of the leaves with white spots, and the color of the yamakura is thicker. The flowers are big and look very beautiful. 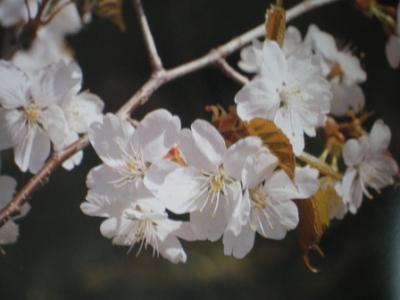 Cerasus leveilleana is similar to Prunus serrulata, but there are no white spots behind the leaves. In addition, there are many fine hairs on flower stalk, flower stalk, leaf and so on. The petals are usually white and bloom only when the sakura and sakura are scattered. It is the most widely distributed cherry blossom in Japan, and is also grown in Hokkaido, Honshu, and Shikoku. Flowering is from early to mid-April (Mishima City), mid-April to late April (Tokyo), late April (Fukushima), mid-May (Nakakitsu) and late May (Hokkaido). 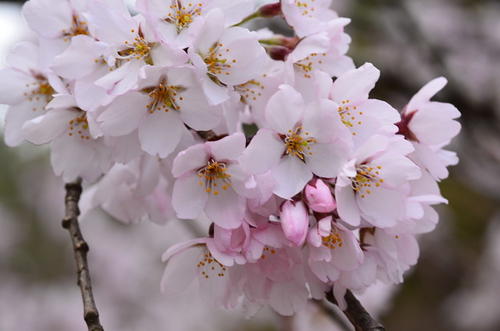 The shape of the calyx tube is characteristic, with the lower part of the Garden bulging into a pot shape. Flowering early, because in the spring of the flowering stages and hence this name. Petals are about 1cm long, the color is pure white, reddish purple, but light red is more common. Weeping cherry is very strong, the tree age is relatively long, many are 15 to 20 meters high tree. Flowering is in late March (Tokyo), mid-April (Sendai, Kanazawa), and late April to early May (Morioka).

Flowers first and then leaves. Named for its flowering around the spring equinox, the elongated, drooping branches of the "bendakura" are the horticultural varieties of the Edo bendakura. Because of its tenacious vitality and long life span, there are giant and famous trees of this variety all over Japan. The three famous Japanese sakura are all of the Edo Kishi sakura family. 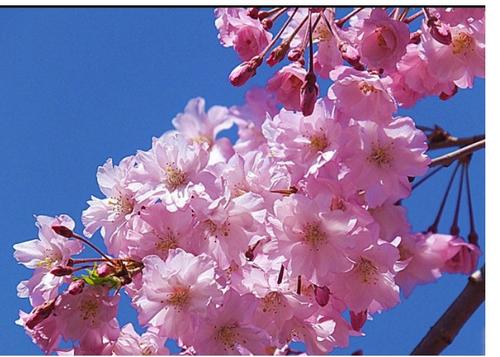 Prunus pendula is also famous abroad because of its beautiful shape and high appreciation value. Stems are 2.5cm, pale pink in color, white at a distance when in bloom. Almost all cherry blossoms have drooping varieties, but the term drooping cherry blossom is generally used to refer to this kind of cherry blossom. In addition to sakura sag, and "Edo other shore sakura" there is no difference. In addition, there are "chrysanthemum heavy", "mountain cherry chui" and other varieties of hanging branches. Prunus pendula flowering period is in late March (Tokyo). 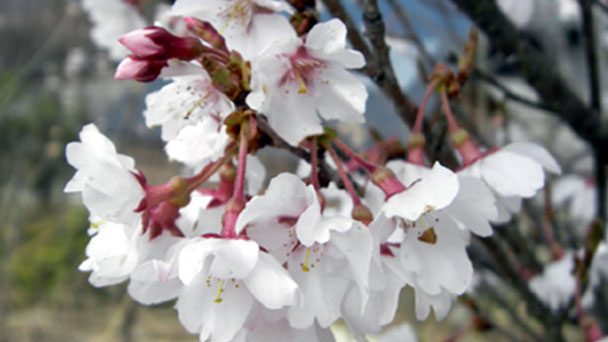 The floret has a short stalk, the lower part of the calyx tube slightly bulges, and the flowers open downward. The Prunus subhirtella is a cross between the Edo Yamakura and the bean sakura. Thin branches, compared with the Edo other shore cherry is a small wood, more suitable for Small Garden planting. As its name suggests, it produces lovely reddish flowers in early spring and is often cut to decorate the plum blossom. Flowering is in late March (Ogichi), early April (Tokyo, Kanazawa), mid-April (Morioka), and early May (Matsuzumi).

Fuji cherry grows in the Fuji Mountain and Hakone Mountain as the center of the mountain. The distribution range is as far north as Bajue, south as Izu Peninsula and east as Fang Zhong Peninsula. The flower color is white, reddish, and the flower stem is about 2.5CM. People often cut them off and plant them as bonsai. Flowering period is from early March to early May (native), late March to early April (Tokyo). 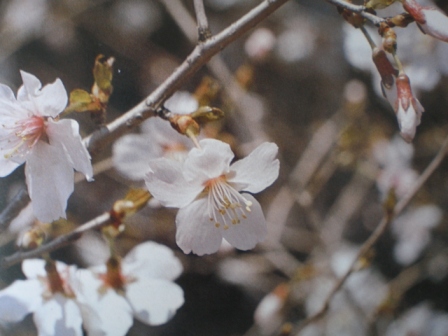 Each flower has as many as 100 petals. Chrysanthemum Cherry is also one of the most late blooming cherry blossoms. When it blooms, the leaves are fully grown and hidden in the flower. The flowers are small in size. 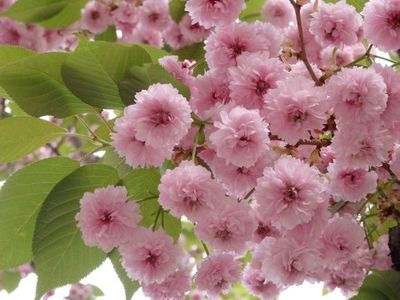