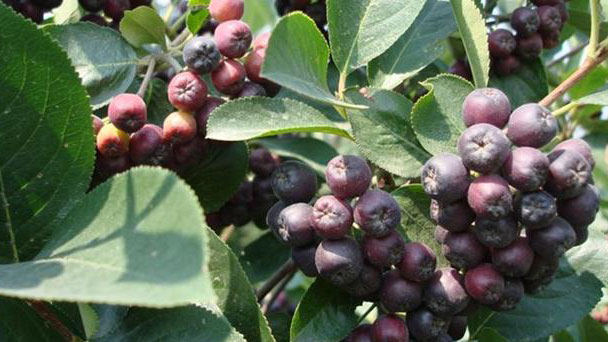 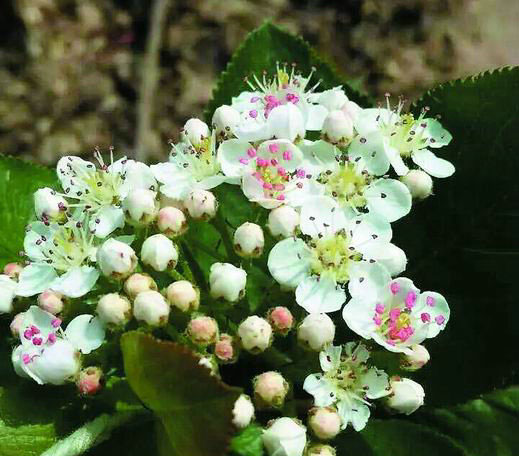 Black chokeberry is a multi-stemmed, deciduous, eastern North American shrub. It reaches 4–8 feet in height, but in cultivation, and with a selection of hybrids, many plants available in commerce reach only the lower end of this height range. The plant’s habit is multi-stemmed, and plants can form large, dense colonies over time.
Black chokeberry flowers have five white petals and numerous pink stamens. As many as 30 flowers occur in each 2-inch diameter cluster. They open in mid-May, late enough that they are not often affected by late spring frosts. Primary pollinators are small bees.
Black chokeberry fruits are 1/3 – 1/2 inch diameter, glossy and black when ripe. They hang down in clusters from red pedicels, with few-to-30 fruits per cluster. The fruits are pomes (like apples), and each contains 1-5 seeds. They mature primarily in August. Shortly after maturation, the fruits shrivel and most drop. 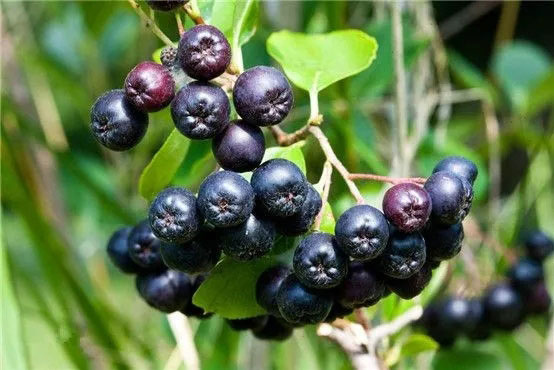 A member of the rose family, Black Chokeberry tolerates partial shade (up to 50 percent) but thrives in full sun. Hardy to zone 3 (the Chicago area is zone 5), it is also an excellent choice for those tough, low-lying wet areas where only moss and mosquitoes flourish. And yet it can acclimate itself to dry, sandy locations as well.
Although Aronia melanocarpa is native to eastern North America, it is widely planted in eastern Asia. In 1967, Howard Brooks, of the United States Department of Agriculture, collected plants in Russia to test at an Iowa site. The plants there suckered freely — a trait that may be desirable, depending on the location. Although studies note that chlorosis may be a problem in alkaline soils, no symptoms were detected on any of the specimens here at the Chicago Botanic Garden, where soil pH can reach 8.5. 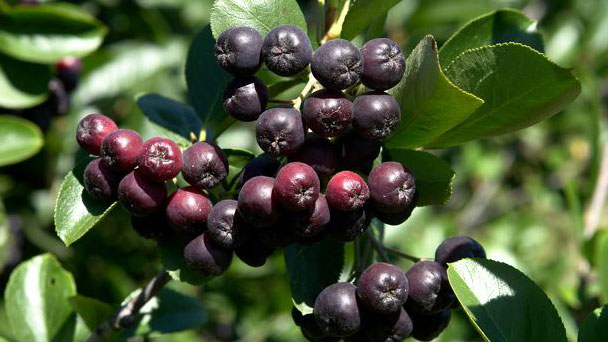 How to Grow and Care for Black Chokeberry

How to Grow Black Chokeberry

Reproduction is primarily by seed. Black Chokeberry seeds have an internal dormancy that can be overcome by being stratified in moist peat for three months between 33°F and 41°F. For nursery scale production of seedlings, it is recommended that the seed be sown in September. The best germination occurs from seed that has been cleaned. Poor germination results from seed that has not been separated from the pulp.  Propagation of cultivars of black chokeberry is straightforward from softwood or semi-softwood cuttings. Softwood cuttings in late May-early June, to be rooted in well ventilated frames, or hardwood cuttings with piece of 3-year-old wood attached. 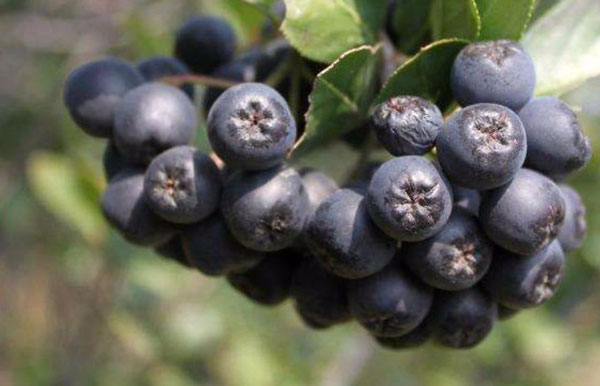 How to Care for Black Chokeberry

You can plant a black chokeberry shrub in either full sun or partial shade. But you will get the best flowering and fruiting in locations with full sun, meaning at least six hours of direct sunlight on most days. Aronia plants are not very picky about the soil in which they are established. A wide range of soil types is suitable for these bushes.  The optimal soil is slightly acidic with pH between 6 and 6.5. Watering your Aronias is needed for maximum fruit production. When dry, water the plants once or twice a week. Be sure to water the shrubs right after planting.  Black chokeberry has good tolerance for both the cold and hot temperatures of its growing zones. It flowers fairly late in the spring to avoid frost. But if there happens to be a late frost, this can damage the blooms and affect later fruiting for that growing season.  Apply a balanced, slow-release fertilizer annually, if desired, to promote plant growth. Fertilizer applications are often unnecessary for the chokeberry shrub, particularly if nutrient-rich amendments were worked into the soil before planting and an organic mulch is used around the shrub. Regular pruning is important in the cultivation of chokeberry. Prune to remove dead and weak branches every year to promote growth and more fruits. Fertilization is often unnecessary for chokeberries, nevertheless if the soil is poor or plant needs a boost balanced fertilizer can be applied in spring. 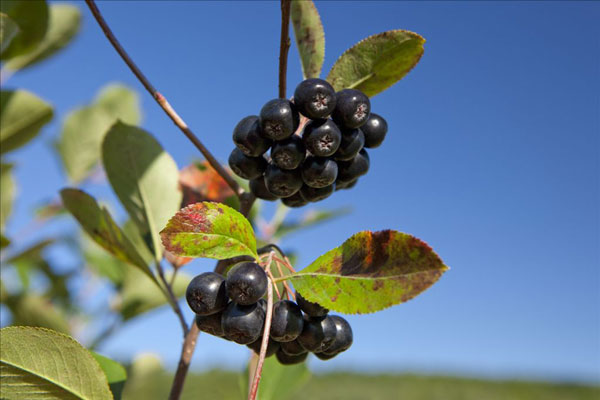 Black chokeberry fruits are unpleasant when raw (hence the common name), but when processed they have culinary and nutraceutical value. Smith notes that, historically, the Potawatomi people used the fruits as food and made an infusion of fruits as a treatment for colds. The Abnaki also used fruits as a food (Rousseau).
In recent history, black chokeberry has been extensively produced in Russia as a small fruit, used in juice products (mixed with apple juice), wine, compote, and pickles (Kask). It has been commercially grown in Europe where its fruits are used in juice, alcoholic beverages, energizing beverages, and as a food colorant (Bussieres et al.). Sweden initiated studies to develop this crop in 1986 (Jeppsson and Johansson). Knudson notes that fruits can be canned whole, the juice can be used in fruit drinks and jelly, and extracts can be used as natural colorants in the food industry.
The fruit of black chokeberry has higher levels of antioxidants (anthocyanins and flavonoids) than any other temperate fruit. This is generating an increasing level of interest among small fruit producers in the U.S.

Black Chokeberry notes that black chokeberry was introduced to western gardens as a landscape plant around 1700 and that its value is reflected by its receipt of the Royal Horticultural Society's Award of Merit in 1972.  Its ornamental attributes include three seasons of interest: white flowers in spring, lustrous green foliage in summer and black fruits in late summer, and bright yellow-orange-red foliage in autumn. There is growing interest in this plant as a multi-season native shrub for landscapes in the eastern U.S. It is easy to propagate and produce in nurseries. Its adaptability to a wide range of soil conditions and freedom from major problems makes it a good candidate for wetland reclamation projects, roadside and highway plantings, and parking lots. 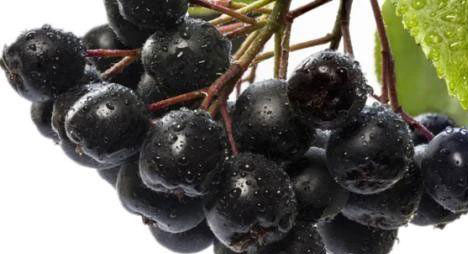 Aronia berry bushes are not prone to disease or to pests. They will rarely develop leaf spot or rust. Both of these are fungal type infections and are cosmetic in nature. They can be avoided if you water your aronia berry bush at the ground level rather than drenching the foliage with water. Plenty of elbow room will allow good airflow around the leaves, too, which will help prevent disease or damage. 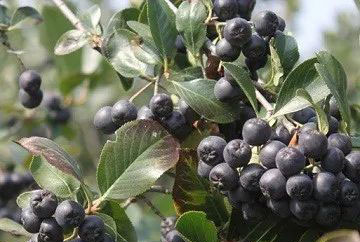 With all the variation and seasonal interest that aronias bring to the garden, the uses are nearly endless.
Include a dwarf form in an edible raised bed kitchen garden.
Plant a larger variety in a row to screen a property line.
Place along a stream or other naturally wet area where plants can spread naturally.
Create an edible garden area along a slope using chokeberry and blueberry shrubs, with groundcover strawberries as an underplanting.
Use a medium-sized variety as a foundation planting. Combine with other shrubs with multi-seasonal interest for an ongoing color display.
Use a groundcover variety instead of a grass lawn in a challenging area that gets plenty of sun.
Plant a hedge of a medium-sized variety to divide garden rooms and keep the hedge sheared for a formal look.
Use a medium to large variety as a stand-alone focal point in an island bed.
Plant alongside other native plants to create shelter and food for birds and other wildlife.

Consider combining Glossy Black Chokeberry with other native shrubs such as Grey Dogwood, American Filbert, or Common Witchhazel to create a mixed screen. Add smaller shrubs such as Common Snowberry, New Jersey Tea, or Meadowsweet along the front of the border for a layered effect and even more wildlife appeal. Add in some red milkweed to attract Monarch butterflies and other pollinators.