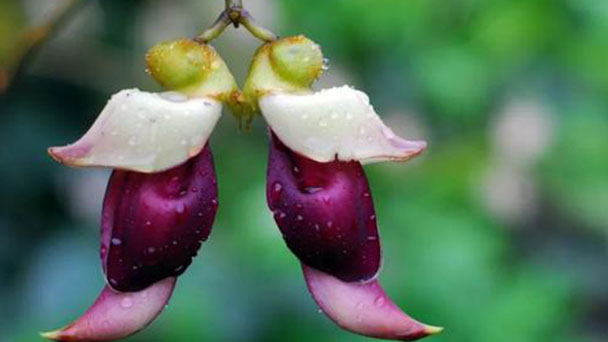 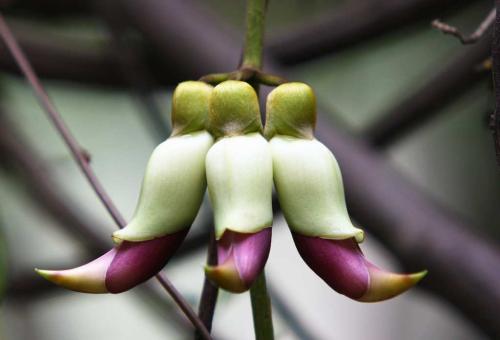 Flowers of Birdwood's Mucuna are in clusters, growing directly on the vine. The shape of the Flower resembles a bird, hanging into a string of birds like birds flying. Flowers have five petals, white, each flower like a bird. Flowers open on the vine, hanging laurel into a string, each string of 20 or 30 different, string droops, like ten thousand birds perch branches, god form both.

Petals of Birdwood's Mucuna are pale green, two petals will roll up into the shape of wings, amorous, very charming, ornamental value.

Birdwood's Mucuna likes wet or semi-dry climate environments. It requires the relative air temperature of 50 ~ 70% in the growth environment. If the relative air humidity is too low, the lower part of the leaves will turn yellow and fall off, and the upper leaves will be dull. Birdwood's Mucuna, as it is native to the subtropical region, is very strict with winter temperatures and stops growing when the ambient temperature is below 8 ° C.

Birdwood's Mucuna looks like a flock of finches hiding in a vine. The white Birdwood's Mucuna, which turns brown in two or three hours after being picked, is even more finch-like. If you do not care to damage the petals, there will be red juice flow out, like blood, it is more magical. Birdwood's Mucuna usually flowers around Tomb-sweeping Day, and the flowering period is about 40 days. Birdwood's Mucuna is usually a flower, not a fruit.

How to grow and care for birdwood's Mucuna

Birdwood's Mucuna, as it is native to the subtropical region, is very strict with winter temperatures and stops growing when the ambient temperature is below 8 ° C.

Birdwood 's Mucuna seedlings plate or have several years of big plant pots, in pelvic floor in the first 2 ~ 3 cm thick coarse grained matrix as a filter layer, cover it with full of rotten organic fertilizer as basal, thickness of about 1 ~ 2 cm, then cover with a thin layer of substrate, about 1 ~ 2 cm thick, and then into the plant, in order to separate the fertilizer from the root, avoid burning roots. On the basin with the matrix can choose the following one: on the basin after pouring a permeable, and in the shade environment maintenance for a week. When the seedlings are transplanted, dig the planting hole first, and sprinkle a layer of organic fertilizer at the bottom of the planting hole as base fertilizer (base fertilizer), the thickness is about 4-6 cm, and then add a layer of soil and put the seedlings, to separate the fertilizer from the root system, to avoid burning the roots. Put into the seedlings, backfill the soil, cover the root system, and foot the soil, pouring a permeable.

Birdwood's Mucuna for potted plants, in addition to adding organic fertilizer at the time of potting, in the normal maintenance process, need to carry out appropriate fertilizer and water management.

Spring, summer and autumn are the peak seasons for its growth. Fertilizer and water management follows the sequential cycle of "Huabao" -- "Huabao" -- "Qingshui", with an interval of about 1 to 4 days.

In winter, during the dormant period, it is mainly to control fertilizer and water. Fertilization and water management should follow the sequential cycle of "Huabao" -- clear water -- clear water -- "Huabao" -- clear water -- clean water. The interval period is about 3-7 days. For Birdwood's Mucuna planted in the ground, according to the drought in spring and summer, apply 2 ~ 4 times of fertilizer water: first in the root neck outside 30 ~ 100 cm to open a circle of small groove (the bigger the plant, the farther from the root neck), groove width and depth are 20 cm.Sprinkle 25 ~ 50 jin of organic fertilizer, or 1 ~ 5 two particles of compound fertilizer (chemical fertilizer) into the ditch, and then pour on permeable water. After winter and before spring, apply fertilizer again according to the above method, but do not water.

Birdwood's Mucuna is a dormant or semi-dormant plant in winter. Weak, diseased, dead and overcrowded branches should be removed.It can also be combined with cuttings to finish the branches.

Birdwood's Mucuna will grow very fast as long as it is properly maintained. When it reaches a certain size, it is necessary to consider changing it to a larger pot to allow it to continue to grow vigorously. The proportion of culture soil and components for changing pots can be selected as follows: Garden soil: slag = 3:1; Or garden soil: medium river sand: sawdust = 4:1:2; Or paddy soil, pond mud, leaf rot soil in one of the.

To take off the pot

Mucuna Birdwood 's put the pots of flowers on the ground and you want to change with slap dab around the basin, first make the root trembled and separated from basin wall, Flower pot upside down on the left hand, left hand index finger and middle finger gently clamp plant, resist basin along the wrist and fingers, right hand slapping your pelvic floor, again from the bottom hole to the thumb and soil top down, let the plants come out.When removed, pat the soil gently with your palms to remove excess soil. 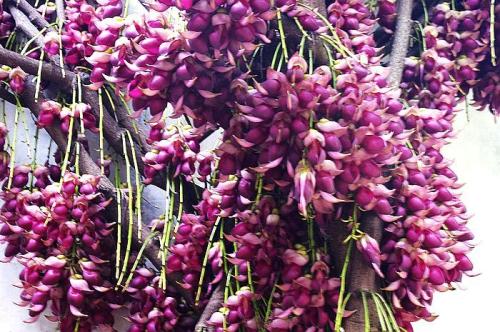 Birdwood's Mucuna can be propagated by cutting and layering. Cuttage in the spring before germination, the selection of robust branches as cuttings, the lower end of the root powder and other rooting hormone solution soaked into the wet sand bed after sun shading spray moisture, about 1 month roots; Outdoor cuttings in summer, need to take shade shade. The main use of the landing of the vines, in the lower end of the internode after the cut into the soil, to keep wet, after the root cut off the new plant. Used for planting or vertical greening, can be used to mix peat soil or garbage soil and other slow effect fertilizer pond mud, appropriate control plant growth. Sprout is strong, and pruning, after autumn should be overdense vines and aging branches pruning clean once, increase transmittance, promote the formation of flower buds.

Birdwood's Mucuna is a flower variety with local characteristics in our city. It has a strong ability to climb up. The flowers hang in clusters on the vines, with 20 or 30 flowers in each cluster, which symbolizes the positive, progressive and united spirit.

The distribution of Birdwood's Mucuna

Birdwood's Mucuna is distributed in Jiangmen, Zhaoqing, Qingyuan, Guangzhou, Shaoguan, Dongguan and other places in Guangdong Province. Birdwood's Mucuna is blooming in spring and lasts for two weeks. Birdwood's Mucuna has a peculiar appearance, with clusters of spikes, four or five petals and recusals like the head of a finch. On each side there was a small black spot like an eye; In the middle of the flap, bow like a bird back; The petals on either side resemble finch wings; The bottom petal extends back, which is the tail; There is also a handful of slender slightly curved stamens, the shape of the flowers like a hanging on the vine of the finches.

Birdwood's Mucuna vines bend and spiral and extend up to 20 metres, measuring 24 cm in diameter at the base of its stem. Clusters of Birdwood's Mucuna grow on the vines. According to the Central South University of Forest Science and Technology Lin Qinzhong professor, this vine named evergreen oil ma vine, leguminous plants, butterfly flower family, the age of the mother vine is 300 years, flowering every year, Yuanling scattered distribution is more, in the two you mountain scenic spot, five strong stream, kuafu mountain forest park and other places are distributed.

According to some old farmers in Guangdong, fresh Birdwood's Mucuna tastes sweet and delicious, which can be used as a dish with dishes, and can also be cooked with meat soup, which is delicious to fry. Sun-dried Birdwood's Mucuna is used medicinally and is a good source of decrease internal heat heat.

Birdwood's Mucuna is evergreen all the year round. Every time before and after Tomb-sweeping Day, flowers look like broam and hang in clusters like Birdwood's Mucuna flying, which is of great ornamental value. Therefore, it is most suitable for the top greening of large trellages, green corridors, green pavilions and open-ground restaurants in parks and courtyards. Birdwood's Mucuna is suitable for wall, rockery balcony and other places of vertical greening or as slope protection flowers and trees; Birdwood's Mucuna can also be used for rock, stacked stone, forest configuration, quite natural wild interest. Top greening, early should pay attention to the establishment of support, artificial binding to help it climb.

Birdwood's Mucuna is suitable for the top greening of large trellises, green corridors, green pavilions and open-ground restaurants in parks and courtyards. 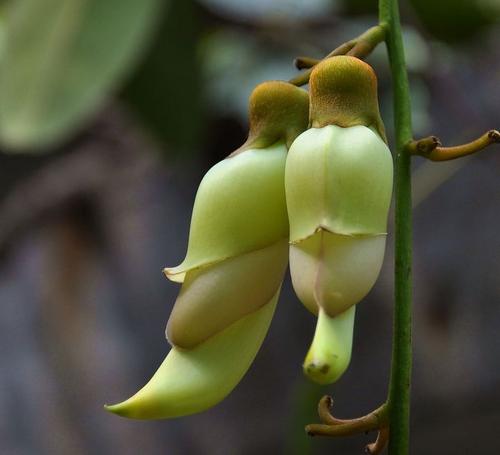