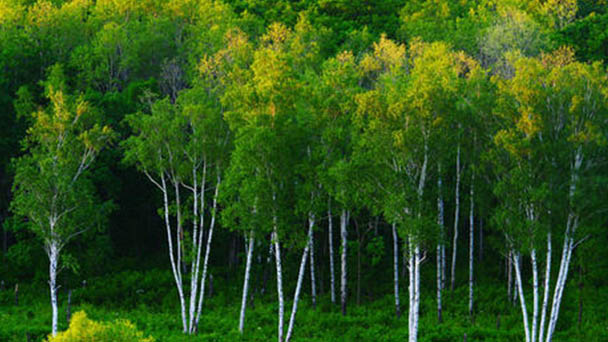 Japanese White Birch (Betula platyphylla Suk.) : Deciduous tree with a trunk up to 25 m tall and 50 cm thick. Japanese White Birch has white smooth paper-like bark, which can be layered off, and can be written on the thin peel with a pencil. Japanese white birch has alternate unisexual leaves with serrated edges, monoecious flowers, and soft drooping male inflorescence that bloom in spring before the leaves appear on the trees. Japanese white birch trees have small, flat fruit called samaras that are easily picked up by the wind and carried far away. 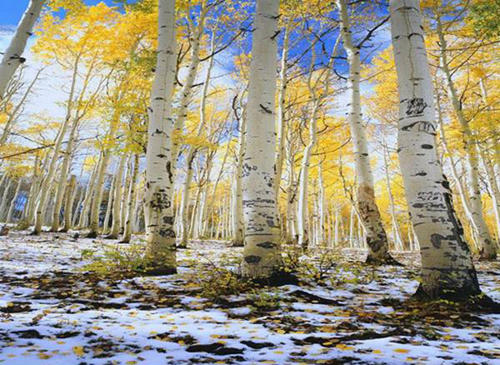 Inflorescence of Japanese White Birch is solitary, terete or rectangular terete, usually pendulous, 2 -- 5 cm long, 6 -- 14 mm in diameter. Peduncle is slender, 1-2.5 cm long, densely pubescent, nearly glabrous when mature, without or with or sparsely or densely resinous glands; Fruit bract of Japanese White Birch is 5-7 mm long, densely pubescent on the back to mature gradually fall off, MAO margin short cilia, base cuneate or broadly cuneate, lobes triangular ovate, apex acuminate or obtuse, lateral lobes ovate or suborbicular, vertical and inclined to bend down, such as vertical or inclined exhibition is a micro lobes slightly wide and short, such as across to the next turn, the length and width were greater than lobes.

Japanese White Birch grows at an altitude of 400-4100 meters of the hillside or forest, large adaptability, wide distribution, especially moist soil, for the pioneer of secondary forest tree species. Pure forests are found in the Greater and Lesser Hinggan Mountains and Changbai Mountains of China. Broad-leaved deciduous forests and coniferous broad-leaved mixed forests are also common species in the mountainous areas of North China Plain, Loess Plateau and Southwest China.

Japanese white birch can be propagated by sowing, cutting, and layering.

Japanese white birch is a small seed that is less resistant to drought, and should be watered immediately after planting. Always keep the bed moist. Otherwise, seedlings cannot be unearthed without shading and watering. Because Japanese white birch seeds are small and covered with thin soil, they cannot be irrigated with large amounts of water, but only by spray irrigation, which requires a small amount of water and a good degree of atomization, otherwise the seeds will be easily blown out of the bed surface and affect the germination of seeds and seedling growth. After sowing seedlings grow 4 pieces of cotyledon to take a small number of repeated watering methods, in order to meet the needs of water seedlings in different growth periods, by all means not thoroughly watering or flooding irrigation. The key technique is to keep the bed wet from sowing to the later stage of seedling growth.

Weeding and soil loosening is an important technical measure in the Japanese White Birch field management of nursery, which should be combined. Wedding to do "in addition to early, in addition to small, in addition to the '' principle, artificial weeding must be uprooted when the soil is wet. The number of times depends on the coverage and growth of weeds and mosses. The number of times of weeding is generally 3-4 times from May to August, and 1-2 times in other months.

Fertilization is an important technical measure to ensure the healthy growth of Japanese White Birch seedlings, enhance the resistance of seedlings and improve the emergence rate. 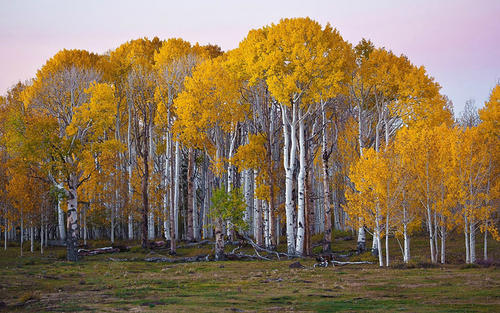 The most dangerous disease of Japanese white birch in the seedling stage is the bacterial blight. Catapling and root rot are the most common and serious diseases of Japanese White Birch, with the number of dead seedlings in the range of 10%-30%, and up to 60% in severe cases, resulting in seedling failure or local failure of production. The main reasons are: poor drainage of nursery land, excessive soil moisture, poor growth of seedlings, and inadequate preventive measures. Therefore, prevention and control should focus on prevention, and technical measures should be taken as follows:

(1) in the seedling unearthed 2/3, must spray 1 times a week 1% half amount of Bordeaux liquid, or iron sulfate 150-200 times the liquid (30 minutes after washing seedlings), or with 50% carbendazem WP 500-1000 times the liquid spray, several agents can be used alternately.Spray regularly every 10 days after mid-July.

(2) once the phenomenon of standing blight occurs, should be removed in time, focus on burning, and then spray a liquid, even spray 2-3 weeks, until the disease disappears, completely stopping the spread.

(3) When the autumn rainy season comes, we should clean up the drainage channel in time to prevent water accumulation on the nursery surface and channels.Leaf rust is a common disease in seedling growth period, which can be prevented 2-3 times by spraying 25% triazole ketone 1000-1500 times liquid.

There are mainly beetle, goldworm, weevil, the key to master the larvae control period, such as found harmful phenomenon, should take 100 times the solution of phoxim (50%) 5g/㎡ irrigation root, or with phoxim (50%) 3g/㎡ mixed fine soil trench cast, and then irrigated water;In the adult stage, light trap and net trap should be used to control the insect population density to the minimum.

Japanese White Birch Forest is a forest consisting of Japanese White Birch trees. Branches and leaves, graceful posture, especially the trunk straight, white and elegant, very eye-catching. Solitary planting and cluster planting in the garden, park lawn, pool, lake shore or along the road are quite beautiful. If in the mountain or hill sloping land into a piece of planting, Japanese White Birch can form a beautiful landscape forest.

Because of Japanese White Birch dense wood, wood can be made. Bark can be extracted tannin extract, birch bark oil, leaves can be used as dye, seed or kerosene. Japanese White Birch can be used as plywood, joinery, furniture, veneer, prevent spools, shoe lasts, vehicles, sports equipment, Musical Instruments, paper raw materials, etc. Wood is used for building and making appliances, bark is used to extract birch oil, and Japanese white birch skin is commonly used among the people to make appliances for daily use. 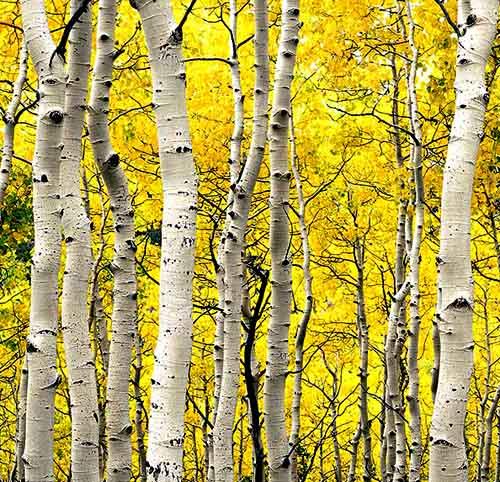