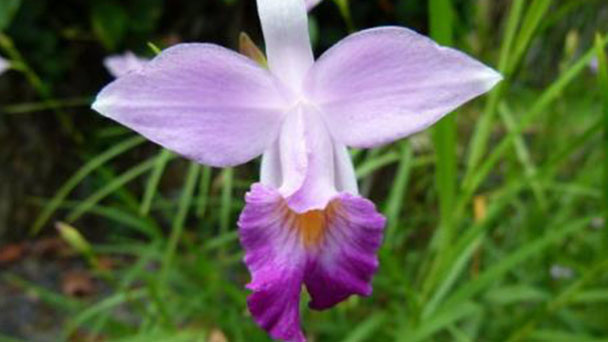 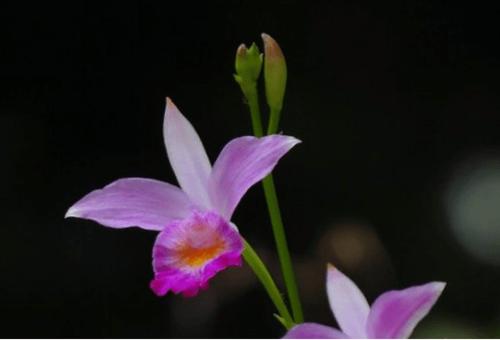 Bamboo Orchid stems are caespitose, erect, not branching; Leaves grass are leaflike, inflorescence terminal, erect; The flower is large, the petals are white, pale pink to reddish-purple, unfortunately the single flower life is short, about three days. bamboo orchid growth needs sufficient water and sunshine, can be directly cultivated in the open air, without shading. A well-grown orchid plant may flower all year round.

Bamboo Orchid plants are mostly ground orchids, and the plants are very large, some of which can reach 1 meter high. The leaves are 12-30 cm long and 1.6-2.5 cm wide. The inflorescences are generally 15-30 cm long and the flowers are also large, sometimes up to 10 cm in diameter. The flowers are very similar to those of the Cartland and are brightly colored and fragrant. But the flowering period is not long, generally about 3 days. Bamboo Orchid is a kind of Orchid that is so easy to grow that it has even become a local wild Orchid in Hawaii.

Bamboo Orchid is 40 -- 80 cm tall, sometimes up to 1 m or more; Underground rhizomes, often ovoid and enlarged at the base of the connecting stem, resemble pseudobulbs, 1 -- 2 cm in diameter, with many fibrous roots. The stem is erect, growing in constant clumps or segments, cylindrical, fine bamboo culm-shaped, usually enclosed by leaf sheaths, with multiple leaves.

Bamboo Orchid likes warm and wet, endure barren, like light, intolerable shade. Bamboo Orchid was born in the forest edge grass at the altitude of 800-1700m, often on the sunny slope of river valleys, forest gladings, on the open grass slope, the formation of a single dominant population.

Bamboo Orchid is grown by seed and per plant.

In spring, according to the row spacing of 15cm, the shallow-furrow drill was opened, covered with fine soil, and moistened with water. Its seeds have no endosperm, and in the wild, they need to be symbiotic with fungi to germinate, and the germination rate is very low. In artificial culture, although the seedlings can be obtained by conventional plant division propagation, the reproductive rate is low. We have obtained a large number of test-tube seedlings by aseptic sowing.

In spring and summer, branches of Bamboo Orchid with roots were cut and planted in holes according to the row spacing of 15cm×10cm. After planting, weeds were regularly pulled out during the growing period of field management and preserved by drenching water. Weeding and soil loosening were combined with medium tillage and fertilization once or twice. 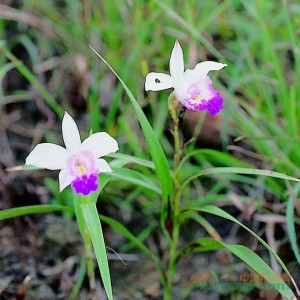 How to Grow and Care for Bamboo Orchid

In wintry weather time, Bamboo Orchid requires much less water, so you can likely get away with watering it utterly each and every 1-2 weeks, relying on the temperature of your home. Bamboo Orchid requires a greater stage of moisture all 12 months spherical than phalaenopsis orchids, so when you do water it, make sure the soil is soaked through, however do not now enable it to stand in water.

Bamboo Orchid grows more often than not at some stage in summer time and autumn. At this time of year, make certain the orchid receives lots of water and stays moderately moist. At these instances of the year, if your domestic is especially dry, you may discover it responds properly to a mild misting of water from a spray bottle in the morning.

You will get the most out of your Bamboo Orchid if you locate it in a role that receives loads of vivid sunlight, however no direct sunlight, as this has the achievable to burn the leaves and flowers. However, it will develop in any stage of light.

Once your Bamboo Orchid has completed flowering, reduce the stems proper down to the beginning of the leaves. The Bamboo Orchid will now enter a nation of dormancy, the place it gathers its power geared up to put ahead extra vegetation later in the year. To motivate the Bamboo Orchid to bloom again, you can expose it to barely cooler temperatures.

To stimulate productive increase of Bamboo Orchid as soon as it has completed flowering, use half of the endorsed quantity of an excessive phosphorus orchid fertilizer. Do now not fertilize this plant whilst it is in bloom.

Water the Bamboo Orchid regularly enough that it's medium or combine in no way dries out completely. Water it well, absolutely moistening all of the soil besides leaving the orchid in standing water. In the winter, the Bamboo Orchid normally desires much less water when it is no longer actively growing. You can normally water it each one to two weeks in the course of that time. Mist the orchid in the morning when it is mainly dry to supply it the humid surroundings it loves.

Fertilize it as soon as a week from spring to fall with a 20-20-20 plant food, mixing 1/4 teaspoon of the crystals into 1 gallon of water. Always observe label instructions. If possible, cross the plant exterior all through the summer, putting it in coloration at first, and regularly accustoming it to full sun.

Watering the mattress about as soon as each three days when there is no rain, or then again frequently is crucial to forestall the soil from drying out. bamboo orchids want steady soil moisture except being overwatered.

Feed the Bamboo Orchid as soon as each and every two months for the duration of spring and summer time through pulling lower back the mulch and sprinkling the pellets of an natural fertilizer, such as 5-5-5 round the bases of the plants, the usage of 1 cup for every 20 rectangular toes of bed.

When all the buds on a cane have bloomed, snip that came off close to soil degree with sterilized a pruning tool. This helps the Bamboo Orchid to regrow and sooner or later bloom again.

Orchidaceae, about 5 species, distributed in tropical Asia to some islands of Oceania, including Bamboo Orchida. Graminifolia (D. Don) Hochr. With narrow leaves Bamboo Orchida. Stenopetala Gagnep.And other 2 also produced in the south of China.

Thanks to the efforts of the breeders, there are also some dwarfing varieties of Bamboo Orchid, some of which reach no more than 15 centimeters when flowering, making them ideal for potting.

Bamboo Orchid has strong fertility, easy to cultivate, and high ornamental value. Because this kind of aquatic plant can be cultivated by seeds, can be produced in large numbers, so the price is relatively cheap, but also more popular aquatic plants.

Bamboo Orchid is suitable for ornamental gardening or cut flowers. 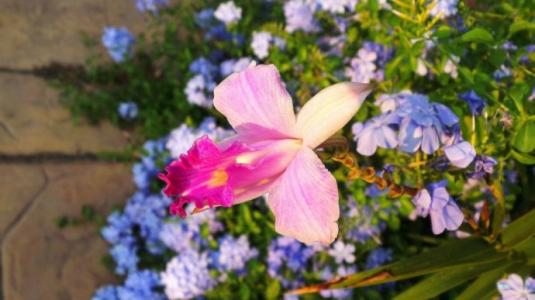