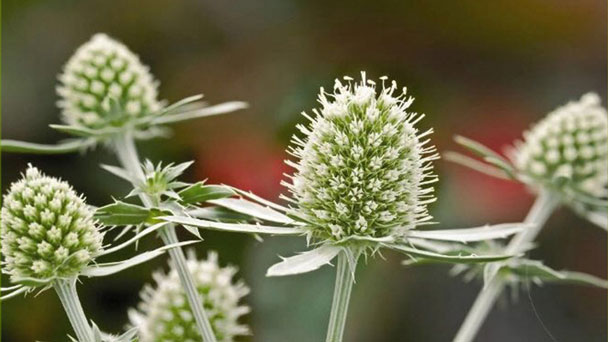 Where to Grow Sea Holly Plant

Once established, the sea holly plant is tolerant of dry soils. As its name suggests, the Flower holds its own in sandy, salty conditions. It also stands up to high heat. Depending on the cultivar, sea holly grows well in U.S. Department of Agriculture hardiness zones 4 to 11. Eryngiums need plenty of sunshine and free-draining soil. They can tolerate poor soil, and a spot at the foot of a wall is a good position as the soil will remain dry over winter. It's also a good idea to plant eryngiums away from the edge of a border or path, as their spikes can be quite sharp. They work well in gravel gardens and don't need a lot of watering. 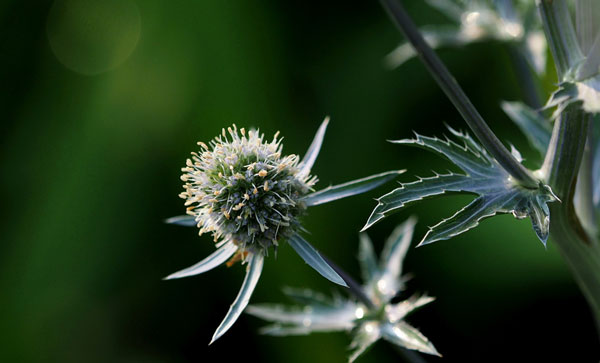 When to Grow Sea Holly Plant

Most deciduous erygniums set viable seed. This should be sown in late-summer and autumn and will germinate in the following spring. Plant out young sea hollies in the following autumn or spring. Seedlings may vary. 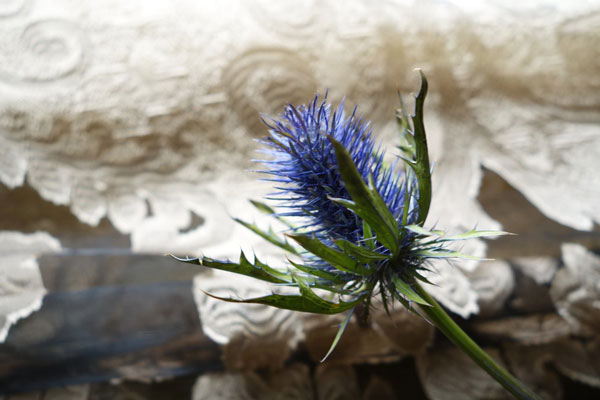 How to Grow Sea Holly Plant

If you plan to grow Eryngium species such as sea holly plant from seed then first they should be planted into a flat within a black bag (in the spring), then placed in the fridge for three weeks.
The flat should then be sunk into the ground in a shady location of the garden. germination usually takes anything from one to ten weeks.
Once you get Sea Holly seedlings they should be transplanted into an area of the garden that is sunny with good drainage.
Sea Holly likes to grow in a soil that is light and slightly acidic to neutral (pH 5 to 7). It is best to space smaller Eryngium at about 40 cm apart and larger ones at between 75 and 90 cm apart.

Eryngium, or sea holly, is a plant that can be propagated by root cuttings. The advice is to take these in mid to late Autumn.
The advice is  to remove no more than one third of the roots at a time, to give the parent plant a chance to recover when replanted.
Remove the finer rootlets and trimmed off the flimsier end of the root, leaving me with fattish lengths of root.  It’s important to keep track of which way up the root is – the new growth comes from the top of the root, the end that was closest to the crown.
Use a gritty compost mix, roughly two parts grit to one part vermiculite, in a clean 9cm square pot. Setting the cuttings up is a simple matter of poking a hole in the compost, easier if the compost is damp, and pushing the root cutting in.  Again, make sure the top of the sea holly cutting, the end that was closest to the crown, is at the top. It should be just under the surface of the compost. The new growth will emerge from the very top of the cutting.
The root portion has the reserves necessary to produce new growth quite quickly, but beware. This new growth is not a sign that new roots have developed. Resist the temptation to muck about with them, leave alone until you see new roots emerging from the bottom of the pot, and plenty of them. This might not be till the spring. The root cuttings need to be kept moist but will rot off if waterlogged, and any new growth will die if left to dry out entirely. Avoid overwatering sea holly plant, basically. 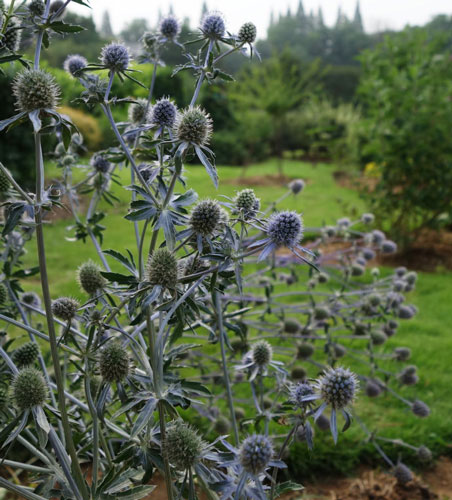 How to Care for Sea Holly Plant

A full day of sun (at least eight hours) will give you the strongest sea holly plants and the most blooms. While the plants can handle partial shade, the reduction in light may lead to weaker stems, which may make it necessary to stake the plants to keep them upright.

The best planting medium for sea holly plants is dry, sandy soil that is still rich with organic matter. Although these plants will grow in poor soil, it's best to amend your mixture with a little compost or peat moss before planting. Additionally, sea holly is not particular about its soil pH—anything around the neutral range is sufficient. However, the plants do need good drainage or they will be susceptible to root rot and can die off.

When it comes to water, this is a very drought-tolerant plant, which means that once it reached maturity, it will not need to be given water often. The only exception would be if there were a heatwave or an extended period without rain. Too much water is bad for the plant because it can cause root rot, so make sure that the Sea Holly is planted away from plants that need a lot of excess water so that the roots don’t absorb the water intended for another plant.

As long as it's planted in the proper hardiness zones, sea holly does not have any additional temperature or humidity requirements. It will do better in the cooler days of spring and fall but certainly will not die off in warmer weather.

Sea holly plants are not heavy feeders, but you should still make sure your soil has plenty of organic matter in it. If not, you will need to feed or side-dress your plants with compost in mid-season.

Even though this plant does not require much maintenance, it is essential that deadheading is a part of the care that it gets. All you need to do is pinch the flowers that are done blooming off of the plant. If they are difficult to pinch off, then the old flowers can be cut off instead. This will allow new blooms to appear. When the flowers are done blooming, the flower stems should all be removed from the plant so that only the green foliage remains.

Most of the issues that trouble sea holly are due to soggy, oversaturated soil conditions or excessive humidity. The natural fix is to plant your sea holly in loose, well-draining soil and choose a sunny location that remains relatively dry.
Sea holly has a pretty solid defense system in place to protect itself from garden pests. The only menace known to plague sea holly is the slug. If your plants are situated in a dry and sunny environment, slugs won’t be an issue, though. Bees and butterflies are drawn to sea holly, but deer and rabbits steer clear of its thorny plumage
Root rot and powdery mildew can sometimes be an issue with sea holly, but again, the environment that you choose for your planting site will determine your plants’ susceptibility to contamination. Avoid root rot by maintaining proper soil drainage wherever sea holly is planted. If powdery mildew becomes an issue (which it shouldn’t if sea holly is kept dry and given full sun exposure), treat your plants with a baking soda spray or a milk spray. 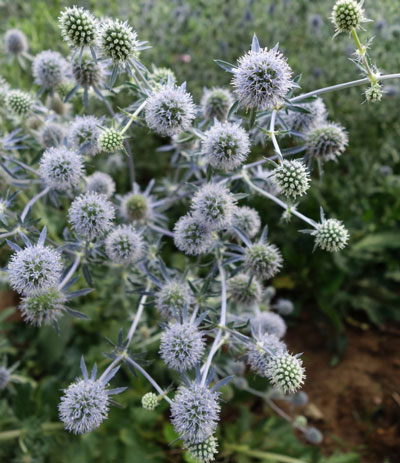 Eryngium varifolium – a compact sea holly, with small spiky flowers on sturdy, upright stems from July to September
‘Neptune’s Gold’ – a colourful plant. The spiky bracts are silvery blue at the base, turning gold at the tips. The stems of ‘Neptune’s Gold’ are blue, and the foliage yellow
‘Big Blue’ – as the name suggests, the flower cones are large and a very intense blue. They appear from June to August and contrast beautifully with the grey-green in leaves
‘Picos Blue’ – a more intense blue than the species bourgatii, and slightly larger
Eryngium x tripartitum – with branching violet stems emerging from a rosette of leaves, the flowers are smaller and appear more starry, as the dark blue bracts are more like narrow daisy petals rather than lacy ruffs 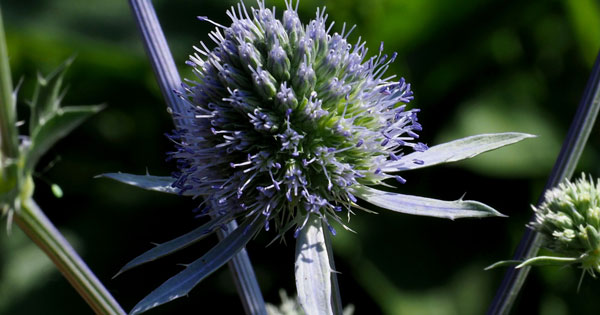 When do sea hollies bloom?

Summer-flowering sea hollies provide a long-lasting flowerhead that eventually browns and fades, giving months of value. These sea hollies die down completely in winter and, given good drainage, will return every year.

Eryngium Sea Holly self-sows readily by dropping its flower seeds on the ground, but it is not invasive. ... The Eryngium plants have taproots, so they won't transplant well once mature. Sea Holly plants attract bees and butterflies, and they are a great plant for a low water garden.

Does sea holly dieback in winter?

Summer-flowering sea hollies provide a long-lasting flowerhead that eventually browns and fades, giving months of value. These sea hollies die down completely in winter and, given good drainage, will return every year.