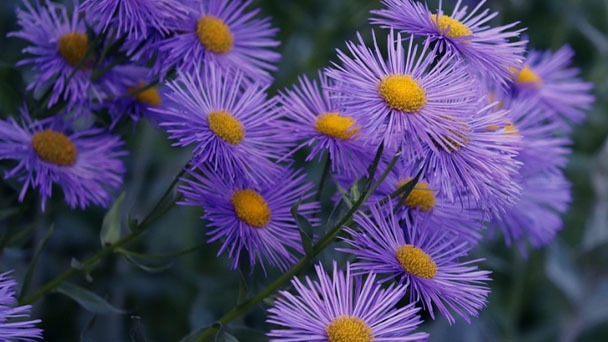 Symphyotrichum ericoides, formerly known as Aster ericoides, is a native of the central and eastern parts of the United States and Canada, where it is frequently seen growing alongside roads.

Find out how to plant asters and when to do so. Asters are daisy-like flowers that brighten the garden in the early fall when many summer blooms are starting to fade. These perennials are native and resistant to deer, and they also give our pollinators late-season nectar!

What is a Heath Aster?

The white heath aster, also known as the heath aster, is a wildflower with a shrubby growth pattern. 12 to 36 inches tall and 12 to 18 inches wide are its mature dimensions. It is found in rocky areas, gravel road and rail beds, and grassy prairies or "heaths."

The stems branch and have sprays of composite flowers with a diameter of no more than half an inch. They have a yellow center disk with florets and colorful rays surrounding it. As the flowers wither, the yellow turns reddish-brown.

The leaves are slender, linear, and occasionally hairy. Although they could be bronze, they are typically green.

There are two known varieties:

Named varieties may differ from the main species in just a few small ways, but not enough to qualify them as distinct species in their own right.

In this case, the rootstock varies slightly, with the pansum variety having a fleshier rhizome.

The heath aster has been mistaken for Pringle's aster, S. pilosum var. pringlei, a white type that is also sometimes called a heath or frost aster.

And another aster that falls under the heath umbrella is the amethyst aster, Symphyotrichum × amethystinum. It results from the natural crossing of the heath aster, S. ericoides, and the New England species, S. novae-angliae, in the wild with no breeder intervention.

While aster seeds can be sown in the spring to grow aster flowers, it may take a few years for the seeds to develop into full-grown plants. Asters are typically transplanted from potted nursery specimens. They thrive in loamy, well-draining soil and need a lot of space around the plants so that their roots have room to spread out.

To prevent the plants from becoming overly woody and dying out in the middle, the root clumps should be dug up and divided every three to four years. The woody center can be removed, and the outer portions can be replanted at the same depth as before.

In a location that receives full sun for the majority of the day, grow aster flowers. More shade can result in lanky plants and fewer flowers, especially in hybrids and cultivars that are more widely used. However, some native species varieties can thrive in partially shaded environments.

Loamy soil with a pH range of 5.8 to 6.5 is ideal for asters. By adding organic matter, such as compost, well-rotted manure, or leaf mold, you can balance an alkaline soil.

Keep new plantings moist and keep them regularly watered until the flowers have finished blooming. As a general rule, the soil where your asters grow needs to remain consistently moist but never saturated. One thing to keep in mind is to avoid watering the leaves of your asters; doing so can result in mildew or fungus growth. For most perennial plants, one inch of rain or weekly watering is typically advised.

Aster flowers are frost-hardy and can endure brief periods of below-freezing temperatures. They flourish in cooler climates. Asters don't have any particular humidity preferences, so they won't require extra spritzing or higher humidity levels.

Asters are moderate feeders and benefit from being fertilized twice a month with a balanced flower fertilizer starting in the spring and continuing until the blooms start to open. Asters shouldn't be fertilized after August because too many nutrients can hasten the blooming process.

Asters are easy to prune; just pinch off the wilting flowers to make room for new growth. Do not leave any stems that are dying or dead. Cut the flowers when they are nearly finished blooming and bring them inside to enjoy in a vase for the easiest pruning.

Cut the stems off at ground level once the foliage has finally been killed by frost. The aster seed is a particular favorite of finches and chickadees, so this can also be done in the spring to allow birds to eat the aster seeds throughout the winter. 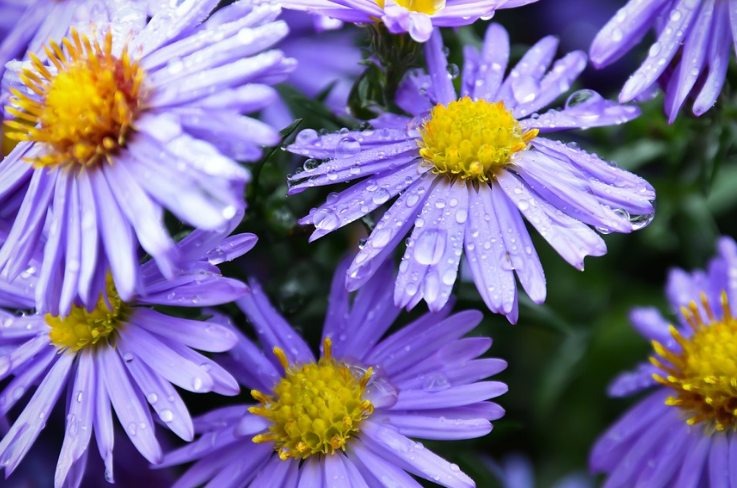 How to Propagate Heath Aster Plant

These plants are simple to multiply from seed, soft stem cuttings, transplants, or division. Let's take a closer look at each technique.

It is possible to buy seeds or collect them from a friend's plant. Be ready for surprises, though, as hybrids are not likely to produce exact copies of either parent.

There are two options when starting from seed:

If you have a friend you can ask, you can take soft stem cuttings from mature plants to create an exact clone of a native species or hybrid variety.

A soft stem cutting can also be rooted by dipping the cut, bare stem in rooting hormone powder and planting it in soil.

Another way to begin is with a mature plant that needs dividing.

These plants develop an expanding root system that allows them to self-sow via dropped seeds as they mature, steadily establishing themselves more and more in the landscape.

As soon as you notice new shoots in the early spring, divide the plants.

Finally, you can start with a plant rather than seeds, soft stem cuttings, or divisions.

Either seedlings or mature specimens can be transplanted. Either way, here's what to do:

As previously mentioned, prepare the soil for your garden.

Remove the plant's pot and untangle its tangled roots gently. Lay the unpotted plant on its side and slowly rotate it if its roots are tightly bound. As you turn it, cut into the soil and roots at their bases with your knife in order to sever some of them and loosen things up.

The unpotted plant should be planted in the ground. Using a tamp, you can keep it standing up.

Apply fertilizer as mentioned above.

It's easy to grow healthy, attractive flowers when you provide:

Give the asters a lot of water when autumn arrives and they stop blooming, preferably 1 to 2 inches, a few weeks before the first freeze. Trim the foliage after that frost (or leave the asters standing until spring so wildlife can enjoy them). To protect the roots of the asters during the winter, add a few inches of mulch on top of them.

Aster foliage can be harmed by rust and powdery mildew disease. To improve airflow and reduce water splashing, space your plants according to the recommended guidelines.

Asters are generally unaffected by insect pests, but lace bugs can be a nuisance. The insects themselves, which are tiny and a bland grayish-brown color, are less likely to catch your attention than the harm they cause. Insect soap can be applied to plants to coat the foliage on all sides and kill pests that are hiding if you notice yellowing foliage and leaf drop in the summer. The good news is that spraying won't harm butterflies and bees because lace bug outbreaks occur before asters bloom.

How to Get Asters to Bloom

There are a few things to look for if your asters aren't performing as they should, even though asters frequently bloom readily with minimal care. To ensure they receive enough water from nature, keep an eye on the forecast as they require about 1 inch of water per week. To prevent them from toppling over and to make sure they receive all of the necessary sunlight, stake tall varieties. Compost should be added to the garden to increase blooms. In the spring and summer, don't be afraid to pinch the flowers back to encourage more growth.

Heath asters are great bed anchors because they give smaller plantings in front of them a year-round, texturally-rich green backdrop.

Additionally, they exhibit well in single-specimen drifts and clearings of various wildflower species.

Heath asters thrive in rockeries due to their hardiness and shallow roots.

Smaller cultivars thrive in informal borders, cottage gardens, and cutting gardens where a more compact stature is preferred. They are also an attractive option for container gardening.

The Aster plant's flowers and leaves can be consumed fresh or dried. But nowadays, fresh in salads or as a garnish, they are most frequently used. It has several health benefits and has traditionally been used in the treatment of weak skin, pain, fevers and diarrhea.

The two are primarily dissimilar in terms of appearance. Daisies typically have a white color and a larger central disk. Asters, on the other hand, have petals that are pink or purple and have a smaller disk.

A good container plant is aster. Use potting soil that has been mixed with peat, give them a minimum of 6 hours of direct sunlight each day, and fertilize them once a month.

Where Should I Place Asters in My House?

Asters require full sun to thrive, so don't be surprised if you have to move their container around the house to catch that glaring light. Any windowsill that receives sunlight will do.

What Plants Are Similar to Asters?

Daisy, marigold, sunflower, chrysanthemum, and echinacea are additional members of the family.