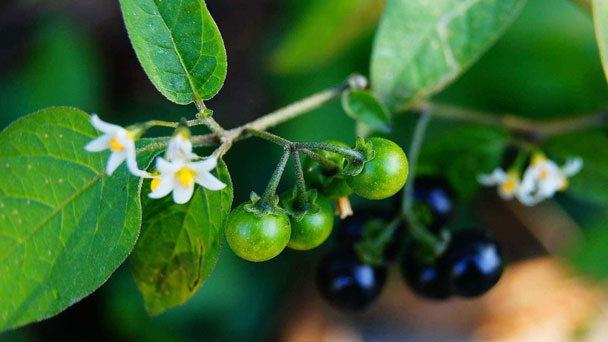 Black nightshade flowers from July to September. A plant can produces up to 400 berries each containing about 40 seeds. An average plant produces 9,000 seeds but a large plant may have 153,000. Seed from unripe berries tested 27 days after Flower opening gave 100% germination. Even seed collected at just 15 days after flowering gave germination levels of 20% after a period of dry storage.
Seedling emergence begins in early May, reaches a peak in late-May or June, declines in July-August and ceases in September. Most seedlings emerge from the surface 25 mm of soil. Black nightshade grows rapidly after germination and the time from emergence to flowering is around 60 days in May and 50 days in July. The seedlings and mature plants are susceptible to frost and late-germinating seedlings are unlikely to reach maturity. 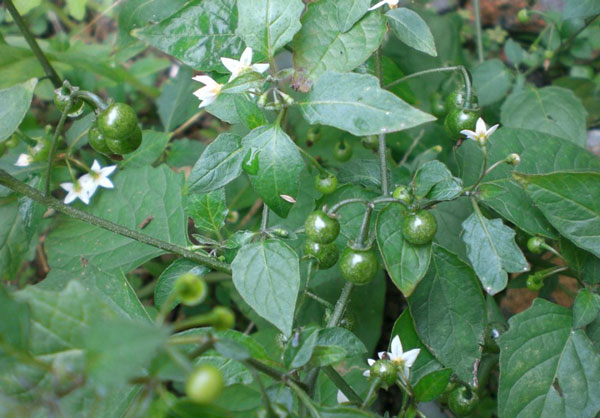 Black nightshade is a native annual found throughout most of England but becoming rarer northwards and local in Wales. It is recorded up to 1,000 ft. Black nightshade is a plentiful and troublesome weed of agricultural and horticultural fields and gardens. It occurs on a wide range of soils but prefers soil rich in nitrogen.
Black nightshade exhibits a high level of variability and several sub-species have been identified. Some populations have developed resistance to the triazine herbicide atrazine. 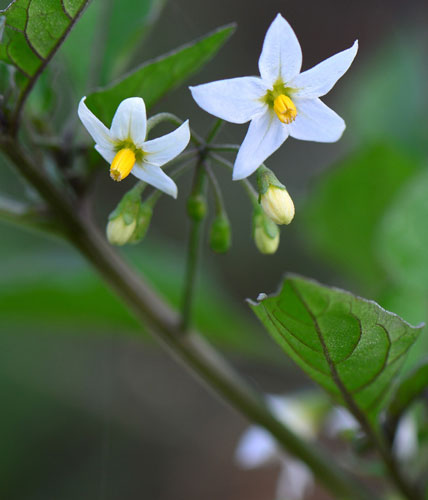 Black nightshade seeds recovered from excavations and dated at up to 80 years old are reported to have germinated. Seeds buried for 39 years in undisturbed soil have given germination levels of over 80%. The soil temperature deeper in the soil remains relatively constant and nightshade seeds require alternating temperatures in order to germinate. Seed in cultivated soil would be expected to receive a favourable temperature regime; nevertheless, some seed is still likely to remain dormant and viable for at least 5 years. The annual decline of seeds in cultivated soil is estimated at 37%.
Small mammals disperse the fruits and seeds. Birds eat the berries and viable seeds have been found in their droppings. black nightshade seeds have also been found in cattle droppings.
A study in Denmark has shown that the seeds can survive in silage made from sugar beet tops. In slurry heated for dry transportation, black nightshade seeds survived heating at 50°C for 15 minutes but were killed by 3 minutes at 75°C. 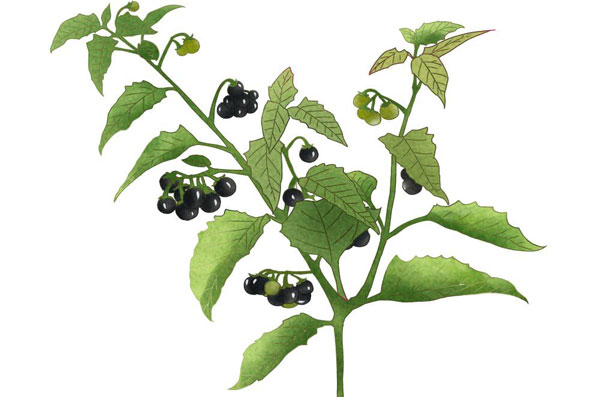 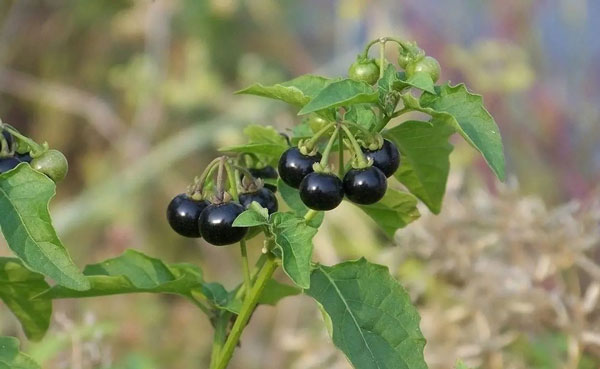 The germination of eastern black nightshade is sporadic throughout the growing season, making it difficult to control in many crops; however, crop competition can aid in minimizing the plant's spread. Good cultural practices promote healthy crop stands, and the resulting canopy shading helps to control weeds. The following guidelines will help you maximize cultural control opportunities:
Follow soil test recommendations for lime and fertilizer.
Plant high-yielding varieties adapted to climate, soil, and field conditions.
If soil temperatures and conditions are optimal, plant early, using narrow row spacing and high plant populations, when possible.
Follow practical integrated pest management programs that monitor disease, insects, and weeds, and use appropriate control tactics when necessary.
Avoid certain herbicide programs (such as Classic plus Pinnacle in soybeans) that increase the potential for eastern black nightshade problems.

Mowing, plowing, disking, and cultivating are some of the more commonly used mechanical methods for field crop weed control. Existing nightshade infestations in hay crops or pastures can be controlled by timely mowing or swathing to prevent seed production. Repeated mowings may be necessary, however, due to the sporadic germination of the plant.
Fall or spring tillage can bury weed seed deeply enough that emergence is reduced. This strategy is especially effective for small-seeded weeds such as eastern black nightshade. Such tillage requires the use of a moldboard plow or other tool that will invert the soil and bury the seed. If soil erosion is a problem, however, intensive tillage may not be possible or practical. Less intensive types of tillage such as chisel plowing, disking, or field cultivating prior to planting can destroy weeds that have already emerged, but may also stimulate additional weed emergence.
Cultivating row crops removes or buries small weeds and makes them less competitive. In corn or soybeans, one or two cultivations during the first six weeks after planting helps to control weeds missed by a preemergence herbicide treatment and provides a good alternative to a postemergence herbicide application. Cultivation will not control weeds within the crop rows, and is not effective on late-germinating weeds. Studies have shown that harvesting soybeans can be difficult with as little as one nightshade plant per 10 feet of row; therefore, for soybeans, cultivation alone may not be worth the time and extra effort required.

To ensure effective, safe, and economical herbicide use, do the following: Black Nightshade (Solanum Nigrum) typically is not a major problem in corn; it is not very competitive and can be controlled easily with many common corn herbicides such as the triazine herbicides (e.g. Aatrex) or any mixtures that contain a triazine. 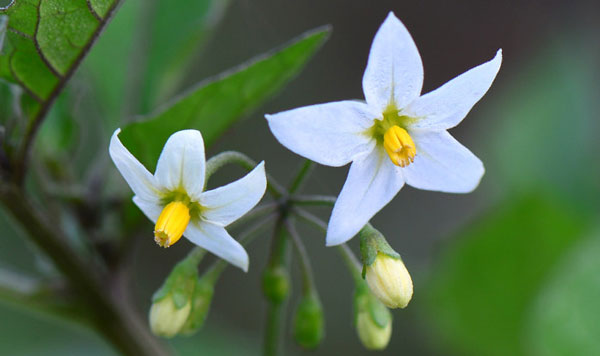 Solanine levels in S. nigrum can be toxic. Children have died from poisoning after eating unripe berries. However, the plant is rarely fatal, with ripe berries causing symptoms of mild abdominal pains, vomiting, and diarrhea.The deadly nightshade lives up to its reputation once humans eat it. Ingesting just two to four berries can kill a human child. Ten to twenty berries can kill an adult.

What is the difference between deadly nightshade and black nightshade?

What are the signs of Black Nightshade (Solanum Nigrum) poisoning?