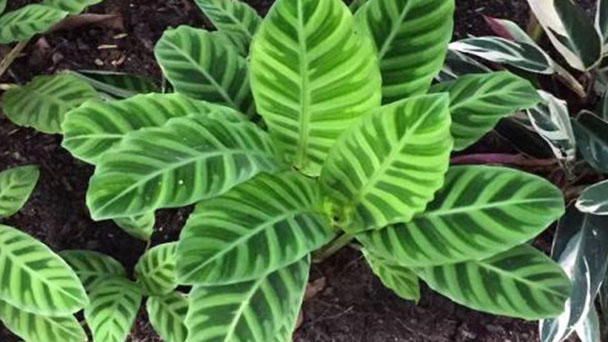 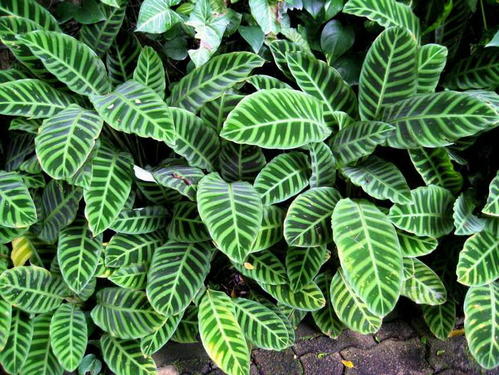 Calathea Zebrina Plant is a herb of medium size, plant height 0.5-1 m. Leaves are 6-20 oblong-lanceolate, 45 cm long and 16 cm wide, unequal, obtuse at the top, acuminate at the base, dark green with yellow-green streaks between, velvet-like, very beautiful, back grayish green when young, lavender red when old, glabrous on both sides; Petiole of calathea zebrina plant is 45 cm long. Inflorescences are ovate, about the size of goose eggs, solitary on scapes of varying lengths, bracts imbricate, broadly ovate, ca. 5 cm wide, purple inside; Bracteoles of calathea zebrina Plant are linear; Sepals are oblong, up to 2.5 cm long; Corolla is violet or white, lobes oblong-lanceolate, 1.5 cm long; Outer stamens of Calathea Zebrina Plant are ovate-oblong, lavender cocoon-colored, 1.7 cm long; One hard leathery is similar to the other, and the other pocket is only half long. Ovary is glabrous.

Calathea Zebrina Plant likes half shade and high temperature wet environment conditions. From spring to autumn, the growth temperature is 15℃ to 30℃, and the overwintering temperature is 10℃ to 15℃.  In the hot summer, we are afraid of the scorching sun. We should have sufficient soft light at ordinary times, and the air is fresh and moist, not too shaded.It requires loose, fertile and good permeability cultivation substrate.

Cultivated in Taiwan and Guangdong of China, Calathea Zebrina Plant is originally from Brazil.

Plant division and tissue culture were used to propagate. Calathea Zebrina Plants with vigorous growth can be divided once every 1-2 years. When dividing Calathea Zebrina Plants and changing pots, the planting should not be too deep, and all the roots can be planted in the soil, otherwise the growth of new buds will be affected. Tissue culture method is generally used for large-scale propagation.

Spring or late autumn combined with repot. Operation will be too dense plants from the pot out, the robust neat plant cluster separate, respectively potted, fully watered, put half shade conservation. But the low temperature in early spring is easy to damage the root, affecting the survival rate. Generally, it is not easy to divide plants too early, and it is more appropriate to divide Calathea Zebrina Plants when the temperature is stable. Each Calathea Zebrina Plant should have more than 3-4 small plants, and try to retain a certain amount of original soil, so as not to affect the growth and formation of the plant. When planting, the culture soil of loose leaf rot soil or peat soil plus 1/3 perlite and a small amount of sand is used.

Basin soil with fertile, loose and good drainage leaf soil is the most appropriate for Calathea Zebrina. Cultivation soil, peat soil and coarse sand mix soil can be used when potted.

Potted Calathea Zebrina is often used in 15-20 cm diameter pots. In the growing season it should give sufficient moisture and higher air humidity, often water spray to the leaf and plant around, in order to increase air humidity, and often keep the basin soil moist. When the temperature is low in winter, the basin soil can be slightly dry.

Avoid sunshine to bask in most, short time sunshine insolation, may cause serious sunburn disease, the light is slightly stronger to be able to appear leaf to roll up namely, turn yellow, affecting Calathea Zebrina Plant growth. Greenhouse cultivation, spring, summer and autumn three levels should be shaded 70%-80% of the sun, winter to cover 30%-50%.10000-20000lx light intensity is the most appropriate.

During the Calathea Zebrina Plant growing period, liquid fertilizer should be applied every ten days, and a small amount of water should be immediately used to wash the leaves after fertilization, which produces fertilizer harm. At the end of autumn, attention should be paid to spraying 0.2-0.3% potassium dihydrogen phosphate, so as to facilitate the plant growth and improve the cold resistance in winter. When changing pots in spring every year, part or most of the old leaves can be cut off, so that they can grow new leaves again, and improve the ornamental value.

Calathea zebrina calls for high humidity, and to make sure the plant gets that, you can try misting and keep the soil adequately moist. If that doesn’t work, you may provide the plant more moisture by using a humidity tray or an electronic humidifier.

It's also recommended to place your Calathea zebrina in close proximity to other plants.

You can repot your healthy Calathea Zebrina Plants semi-annually or annually during the summer and spring season while going for new potting soil. To generate more plants, you can divide them and replant them by division.

Although the young plants may not seem to be as lush and dense as the mother plant, the right care will make them get bright foliage over time. The fact that Calathea zebrina grows quickly is the reason behind the same. 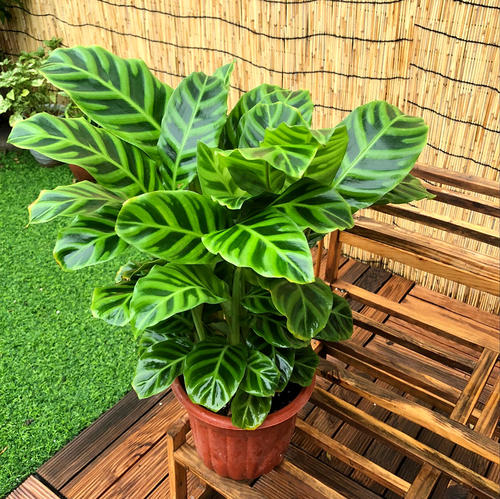 Calathea Zebrina Leaves curling and spots: The most likely cause here is underwatering. Check the soil for dryness and provide water - following the above instructions.

Calathea Zebrina Leaf tips brown: Your plant is most likely needing more humidity because the current air quality is dry.

Calathea Zebrina Leaves dropping: Again, the air could be too dry and the humidity may need to be increased.

Calathea Zebrina Limp stems: Limp stems usually happens when the plant is getting too much water during the winter and the temperature is possibly too low. This can lead to the stems rotting.

Calathea Zebrina Plant has underground rhizome or tuber, leaves solitary, large.In addition to the open leaf sheath at the base of leaves, there is a significantly enlarged joint, called "leaf pillow", in which there are water storage cells, regulating the direction of leaves, that is, when the water is sufficient at night, the leaves stand upright, and when the water is insufficient during the day, the leaves expand, which is a characteristic of araceae plants.In addition, some arrowroot also 'sleep movement', that is, the leaf spread out during the day, the night folded, very strange.

The leaves of Calathea Zebrina Plant are rich and colorful, highly ornamental, and most of them are shade plants with strong negative tolerance and strong adaptability. Calathea Zebrina Plant can be planted in the shade of courtyards and parks or by the roadside. In South China, more and more species have been applied in landscaping. Planting methods can be used in patches, clumps or with other plants.In northern areas, can be cultivated in the ornamental greenhouse for landscape ornamental.

As a result of strong resistance to negative, beautiful leaf color, Calathea Zebrina Plant can be directly planted in hotels, shopping malls, large venues and other public places of the corner lot for permanent layout. However, in the process of cultivation and management, it is necessary to properly supplement the light and regularly spray water to the foliage to improve the air humidity.

Because the Calathea Zebrina Plant type is beautiful, the leaf color is colorful, and has a strong negative tolerance, the cultivation management is simple, mostly used for indoor potted ornamental, is one of the most famous indoor leaf viewing plants in the world. Large variety of Calathea Zebrina Plant can be used to decorate the hall of the guesthouse, market, and a small variety can adorn the balcony of the bedroom, sitting room, bedroom, etc. In the process of cultivation and management, each place for a period of time, should be placed in the balcony, window sill where the sun is strong, enhance the light, for long-term appreciation. Due to the color of the leaves, with eye-catching markings, is a high-grade leaf cutting material, can be directly used as a Flower arrangement or as a lining material. 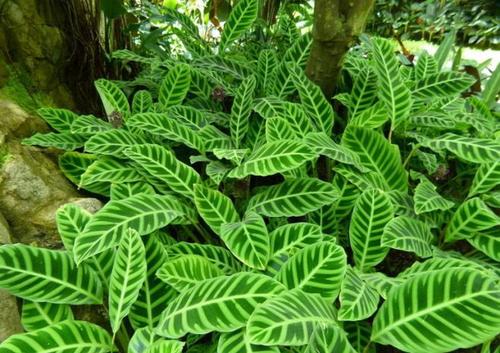