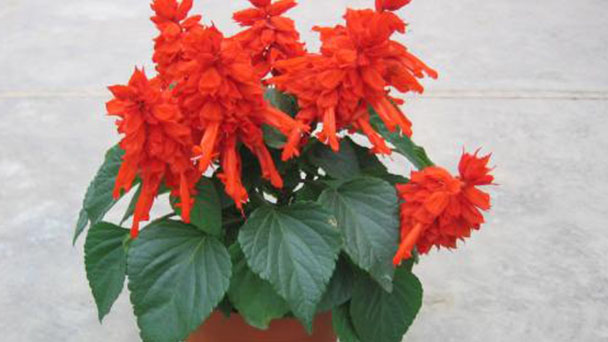 Scarlet sage, also known as Salvia splendens, belongs to the genus Salvia of Labiaceae. Scarlet Sage has slender inflorescence, bright red color, long flowering period and strong adaptability. It is the most widely cultivated herbaceous flower in Chinese cities and gardens. In recent years, new developments have been made in the application of the ornamental plants of the genus  Many new varieties of Sage safflower (red lip) and Sage calyx (a string of blue) have been developed. China has also introduced small batch production, in which the layout of urban landscapes has played a better effect. 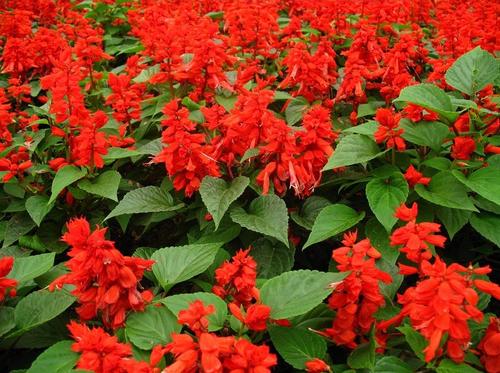 Growing methods of of Scarlet Sage

The planting distance of Scarlet Sage was about 40 cm, and the soil with rich humus or sandy soil was suitable. Scarlet sage grows in the busy season, can top dressing contain phosphorus liquid fertilizer 1 to 2 times, and make blossom luxuriant. Scarlet Sage does not like heavy water, otherwise it is prone to yellow leaves and deciduous leaves, resulting in large plants and sparse flowers. During growth, the heart should be plucked frequently to control plant height and branching. Make inflorescence long and fat, bloom neatly.

The spring sower blooms in autumn, and the old plants overwintering in the greenhouse also blooms in spring, but Scarlet sages are not as numerous as in summer and autumn. In summer the branches and leaves are vigorous, but the flowers are scarce. Scarlet Sage has a late flowering period. If it is to harvest seeds, it should be sown in greenhouses or hotbeds in early March. A little earlier flowering period is helpful for good fruiting. The seeds of Scarlet Sage were easy to fall, or could not mature fully because of the cool autumn, so they were often moved to a greenhouse for winter after pot planting. New branches were cut and cut for rooting in the second year, which was easy to take root.In the 15℃ above the hotbed, any period can be cuttings, inserted treaty 10 to 20 days to take root, 30 days can be divided planting. Cutting seedlings to the flowering period is faster than the seedling, plant height is easy to control. The late inserter Scarlet sage is short, although the growth potential is weak, but the effect on the flowering period is not big, the flowering is still luxurant, more convenient arrangement.For the purpose of seed collection, it is better to use seedlings. Scarlet Sage for National Day was cut in early summer, when the weather was hot and shading should be paid attention to, and rainproofing and drainage should be paid attention to when it was rainy.

Seedlings with 3 to 4 pairs of true leaves should be uprooted, each plant should have at least 4 lateral branches, and moved to the Flower bed when the branch ends have shown color. Such as in front of the flower topdressing phosphate fertilizer, flowering is preferred. Scarlet Sage calyx faded over time and did not fall; for ornamental arrangement, it is necessary to remove the residual flowers at any time, to keep the color gorgeous.

The optimal growth temperature for Scarlet sage is 15-30 ℃, below 12℃ growth stagnation, leaves turn yellow, fall off, flowers gradually fall off.

The propagation mode of Scarlet Sage

Generally in spring sowing. Seeds larger, 1 gram of 260-280 seeds. The optimum temperature for germination was 21 -- 23℃, and 15 -- 18 days after sowing. If autumn sowing can be used indoor disc sowing, the room temperature must be above 21℃, rapid and neat germination. When the temperature is lower than 20℃, the germination potential decreases obviously. In addition, Scarlet Sage is a light-happy seed, which does not need to be covered with soil after sowing. Light vermiculite can be used to put around the seeds, which does not affect light transmittance and has a moisturizing effect, and can improve the germination rate and uniformity, with the general germination rate reaching 85%-90%.

Spring to summer is the best. Choose strong and substantial branches, 10 cm long, inserted into disinfected leaf soil, soil inserted to maintain 20℃, 10 days after insertion can take root, 20 days can be transplanted. 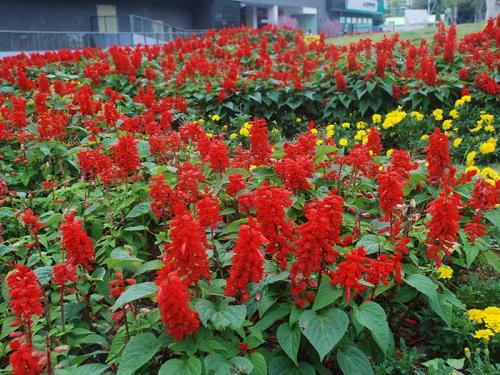 Black rot mainly encroaches on Scarlet sage leaves, petioles and tender shoots. At the beginning of leaf onset, purple brown to brown spots appear on the front. After enlargement, they are mostly round or amorphous black brown spots.Can spray carbendazim, methyl tobujin, dakonin and other drugs.

Powdery mildew Injury young leaves of Powdery mildew, both sides appear white powdery matter, early symptoms are not obvious, the white powder layer appears 3-5 days later, the leaves were watermark, gradually lose green turn yellow, serious injury in the cause of leaf shedding. The onset period is sprayed with polymycelium, triazole ketone can, but the best effect with the country light Yingna.

Most of the leaf tip or leaf edge invasion, the initial yellow dot, then rapidly expanded to the inward irregular shape of the large spot, seriously damaged whole leaf dry up to 2/3, the disease of the greenish yellow, brown dry off. In addition to strengthening fertilizer and water management, in winter, diseased branches and diseased leaves of Powdery mildew should be cut off, underground leaves should be removed, and the source of initial invasion should be reduced. When the disease occurs, comprehensive control should be taken, and carbendazim, methyl tobutazin and other bactericidal agents should be sprayed.

Disease is mainly given priority to by prevention, in high temperature, high humidity or rainy season regularly spray antiseptic drugs, in the dormant stage of the seedlings into the spray of sulphur mixture for comprehensive sterilization, ensure robust growth of seedlings, seedlings grow strong, itself resisted certain disease invasion.

It can be used to kill the nymphs at the peak of their hatching period by spraying with 25% of the WP 2 000 times liquid.

The main species were the scarlet sage tube aphid, Peach aphid, etc., which punctures the juice of the tender organs of the plants, harms the tender stems, young leaves, and flower buds, and seriously affects the growth and flowering of the plants.

More in the larval stage, dozens or hundreds of clusters of harm, in a short time can eat up the tender leaves of the plant, leaving only a few main veins, serious harm to the normal growth of the plant.

A small number of potted plants, can be at the beginning of the appearance of the gathering of a large number of larva leaves, trampled to death. A large number of available 75% phoxim emulsion 4000 times liquid spray kill.

It can occur for 10 to 15 generations a year. Most of the eggs are produced on both sides of the back veins of the leaves or under the filament net if the adults, juveniles and mites gather in the back of the leaves.Each female mite can lay 50 to 150 eggs, up to 500 eggs at most. It takes only 10 to 13 days to complete the generation under the temperature of 23℃ to 25℃, and about 7 to 8 days under the temperature of 28℃.Rampant in high temperature and drought season, often lead to a large number of dense small white spots on the front of the leaf, leaf back yellow and even with dry spots.

Using the false mortality of the adult insect, it is killed in the evening. The phototaxis of the adults were used to trap and kill them with black light.When feeding on adult pests, use 50% malathion emulsion 1000 times liquid spray to kill. In addition, there are other pests such as lampmoth, noctua moth, bridgeworm, pouched moth, leaf cicada, and stink bug, etc., and corresponding control measures can be taken according to the harm characteristics of different pests.

Scarlet Sage originated from Brazil and has been widely cultivated in China.

Function and use of Scarlet sage 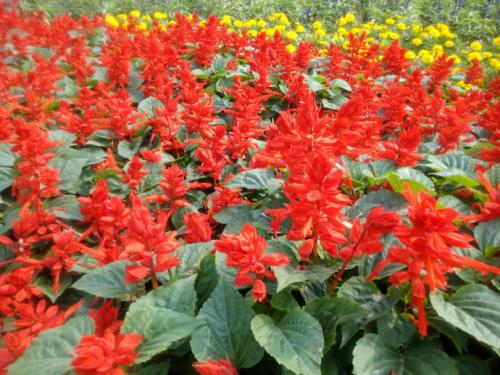