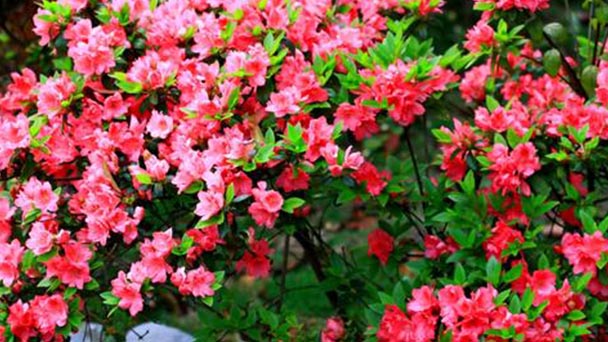 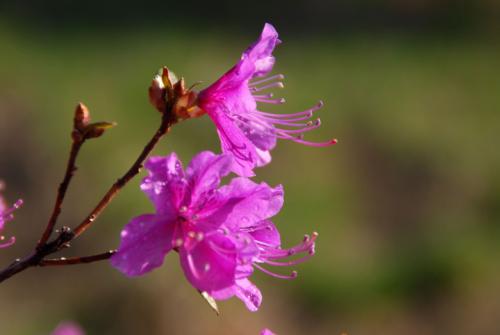 Roots: The rhododendron has a shallow root system that prefers more acidic soil and can co-exist with fungi that decompose organic matter for use by the rhododendron.

Fruit: The Fruit is a capsule.

Seeds of Rhododendron are small, having fleshy endosperm and erect embryos, sometimes winged.

Pistil the female organ of a flower, usually located in the center of the Flower and consisting of the ovary, style, and stigma.

Stigma: At the top of the style, the site of pollination. Some stigmas grow more rough, can secrete mucus, make pollen can attach to go up.

The ecological habits of Rhododendron

There are many species of Rhododendron with great differences in habits, but most of them occur in high altitude areas. Rhododendron likes cool, humid climates, and hates hot and dry. The soil should be rich in humus, loose, moist and acidic with a pH between 5.5 and 6.5. Part of the species and horticultural varieties of adaptability is stronger, drought resistance, barren, soil pH value between 7 ~ 8 can also grow. But on soils with poor viscosity or permeability, they do not grow well.

How to grow and care for Rhododendron

Rhododendron is best to cultivate azaleas in both indoor and indoor environments. The indoor environment is used in winter. In the Yangtze River basin, as long as there is certain illumination and ventilation conditions indoors, there is no need to heat up generally. Winter in North China is extremely cold and dry, so it is appropriate to use a greenhouse at medium temperature (about 15℃) for cultivation. Outdoor sites, summer and autumn use, with mud as the best, avoid cement. The site should be spacious, ventilated and shady, and the shade should be set up above, covered with reed curtain or by borrowing the protection of natural shade. The light transmittance should be about 30%, and the sun should be avoided by all means. The spray of new high fat film on the Rhododendron surface can prevent bacterial infection, improve the ability to resist natural disasters, improve the intensity of photosynthesis, and protect the seedlings to grow vigorously.

Rhododendron likes loose, strong permeability, good drainage, rich in humus acid soil, pH value of 5.0 -- 6.0. If you use clay or alkaline soil, it is difficult to live. Especially the summer cuckoo and the ocean cuckoo, not mountain soil. The soil has to be modified, and usually three kinds of culture soil are used. (1) 7 parts of mountain soil, 1 part of dry carex cuttings, 2 parts of dry leaf rot soil and 1 part of dry fertilizer were mixed. (2) Three parts of mountain soil (topsoil), three parts of horse dung, three parts of deciduous weeds, and one part of human excrement were layered and compacted. After 1-2 years, they were screened for use. (3) 3 parts of mountain soil, 3 parts of leaf rot soil, 4 parts of Garden soil and 2 parts of sandy soil were mixed, and 50 grams of sesame paste residue and bone meal were added to each pot.

Cultivation of azalea flower pots can be used according to the general selection of two kinds of mud basin and purple sand basin. Devon ventilation and good water permeability, conducive to root growth, production units are cultivated with this basin. Shaped azaleas, especially the shaped azaleas, for indoor and outdoor display, generally planted in the elegant purple sand basin, purple sand basin texture is fine, rich in color, beautiful shape, can increase the ornamental value. Purple sand basin permeability performance is not as good as the devil basin, when planting, should be in the basin wall pad with broken tiles (old tiles) so conducive to drainage. The size of the Rhododendron pot should depend on the age of the plant, generally 4-6 years old plants with 5 inch pots; 6-inch pot for 7-10 year old Rhododendron; Use 8-inch basin for 11-15 year old reproductive plants.

Pour Rhododendron had better use rainwater, followed by river water, pond water.If tap water is used, it is advisable to store the water for 1-2 days to let the chlorine evaporate before use. When used, add 0.2% ferrous sulfate, water every 7-10 days during the growing season, and use frequently to ensure that the soil is acidic.

Rhododendrons, like wet ones, should not be too dry. More water is especially needed during flowering. Winter Rhododendron has entered the dormant period, the water is not much, generally every 4-5 days watering 1 times, should be carried out around noon on warm and sunny days. Specific according to the basin soil dry water. In March, Rhododendron starts to bud and demand for water increases. The growth and development of summer rhododendron is later, and the amount of watering should be less than spring rhododendron. Generally every 2 days in the morning a proper amount of watering 1 time. April-June rhododendron blossoms, branches and leaves also began to smoke hair, water demand is larger, generally should be watered 1 time in the morning or evening every day. In the high temperature and dry season from July to early September, water once in the morning and once in the evening. Water should not be too much. Water should be sprayed on the leaves and ground at noon to maintain a moist environment. From the middle of September to November, the weather gradually turns cool, for the azalea growth adaptation period, in order to prevent the extraction of autumn shoots, enhance winter cold resistance, and watering should be reduced. The general next day morning water 1 time, keep a wet can. Rhododendron more like fertilizer, generally using decayed cake fertilizer, fish meal, broad beans or zhenying after the decay of water irrigation, avoid using human excrement and urine.After a room to bud spit flower, every 10 days 1 time thin fertilizer, the concentration of 15%, a total of 2-3 times, to make the old leaves turn green, germination of new roots. After the flowers fade, in order to promote the hair branches to grow leaves, in mid-May to early July fertilization 5 to 6 times.If it rains continuously, dry fertilizer can be applied. Before entering the house, the growth of azalea is about to stop before fertilization 1-2 times, spray a new high fat film to protect fertilizer and soil moisture.

In the room before the flowering should see more sunshine; During the flowering period, shade should be carried out for a short time at noon, and the light transmittance is 60%; During the plum rains of June and early July, when Rhododendron leaves are sprouting, sunlight should be seen as much as possible. But in case of strong sunshine, from 9 am to 4 PM should also shade, in case of burning new leaves. From mid-July to early September, shade should be provided from 8am to 5pm every day to protect against the burning sun. After September in the autumn growing season can shorten the shade time, generally can be in the morning from 10 to 4 PM shade, after October should see more sunshine. After plastic surgery, cut off long branches, sick and weak branches, deformed branches, injured branches.

Rhododendron growth is slow, generally letting its natural growth, only after the flower for plastic, cut long branches, sick and weak branches, deformed branches, injured branches, pruning to the wound daub callus anticorrosive film, so that the wound quickly heals.

Sowing, cutting and grafting are commonly used to propagate, and layering and splitting are also feasible.

Evergreen rhododendrons had better be picked and sown, while deciduous rhododendrons could also store their seeds for the following spring sowing. When the temperature is 15 ~ 20 degrees Celsius, the seedlings will emerge in about 20 days. Cuttage, generally in 5 ~ June between the selection of the year born half lignification branches cuttings, inserted after the shed shading, in the temperature of 25 degrees Celsius or so under the conditions, a month can take root.It takes about 60 ~ 70 days to root slowly.

There are many methods for the reproduction of Rhododendron. The grafting time is not limited, and the stock is mostly biennial Rhododendron. The survival rate is more than 90%.Wild rhododendron and cultivated varieties of rhododendron, rhododendron and rhododendron can be potted or planted in shade. West Azalea whole pot, culture soil multi-black soil, with peat soil, Huangshan soil, leaf rot soil, pine leaf soil and coal cinder, sawdust and other culture soil, as long as the pH value between 5.5 ~ 7.O, good drainage, rich in humus, can be used. Pot feeding is usually done in April or November. The root system of rhododendron expands slowly, and 3 inch pots should be used for L ~ 2 years old.Use 4-inch POTS for 3-4 years old, change pots every 3 to 5 years, and trim the roots.

Disease control and pest control: the military ligand (also known as the crown net bug) was sprayed with 40% dimethoate 1500 times solution, once every 7 days, for 3 consecutive times during the hazard period. The control method of the terminal sprout is mainly to capture and kill the larvae or pupae. The larva or pupa can also be sprayed with 40% dimethoate emulsion 2000 times or DDVP 1500 times.

Red spider, can be used 1000 times of dichlorophenol liquid prevention and control. The military ligand can be controlled by 1500 times dimethoate or dichlorvos. The most common disease is brown spot, which can be controlled by 800 times torbutine or equivalent amount of Bordeaux liquid.

The most common pests of Rhododendron are red spiders and armyworms. Red spider in June to August when the high temperature and dry harm is serious, often make the leaves turn yellow and fall off J can be L/LO00 triclosan to kill the yeast, 1 times a week, consecutive 3 times. May to October there is a military pest harm, the climate is dry spread faster, can be L / 1500 dimethoate or dichlorvos spray kill.Leaf spot is the most common diseases, mainly in mold section during the rainy season, brown patches to appear on the blade, the cycle of infection, the harm is great, is the main cause of falling leaves, prevention and cure method is: in front of the flower, flower after 1/800 thiophanate or equivalent type spray bordeaux mixture, pay attention to improve the light conditions, strengthening ventilation, burning disease leaves at any time. Artificial pollination and hybridization is a conventional breeding method. Varieties with well-developed pistils and high fruiting rate should be selected as the female parent, and pollen should be collected from varieties with special ornamental value in flower color and pattern. Pollen can be chilled in ice bottles for long distance transport. Pollination should be selected in the head secretion of mucus, in order to improve the success rate, it should be repeated 2-3 times. Because the self-pollination string is very low, it is not necessary to emasculate in advance. In the cold climate, without insect interference, it is also possible to not bag.

In addition to Xinjiang, Rhododendron is distributed in all provinces and regions in the north and south of China, especially Yunnan, Xizang and Sichuan, which are the world distribution center of Rhododendron.

The role of Rhododendron

In addition to ornamental, some leaves and flowers can be used as medicine or extraction of aromatic oil, some flowers can be edible, bark and leaves can be made to bake glue, wood can do handicrafts. Alpine rhododendron has developed roots and is a good water and soil conservation plant.

Some species of bark and leaves are rich in dips from which tannin extracts can be extracted. The wood of Rhododendron, root pocket, fine texture, tough, can be made of bowls, chopsticks, basins, bowls, pipes, roots and other daily handicrafts.

Leaves of Rhododendron can be traditional Chinese medicine, and has the symptoms of relieving the surface, resolving phlegm, relieving cough, relieving asthma, treating cold, headache, cough, asthma, bronchitis and so on. 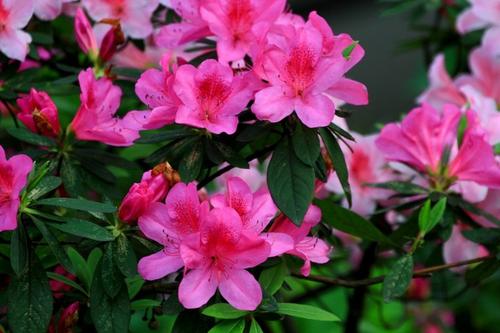 How to grow and care for Rhododendron