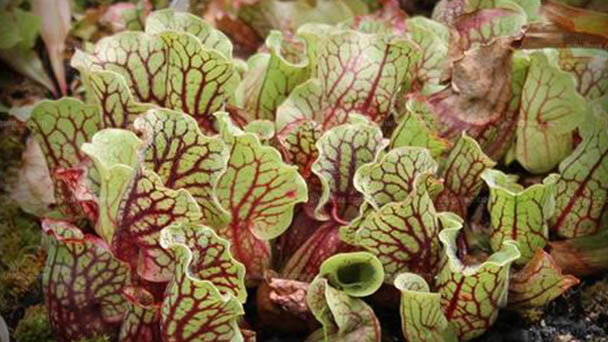 The Purple Pitcher plant (Sarracenia purpurea) is a perennial herb and the stunted insect-eater of the genus Pitcher. Purple pitcher plant has small Purple bottles, only about 30 cm long, with laterally oriented flowers that are brightly colored and contain many subspecies and varieties. It is similar in shape to the cage of the pitcher plant and can secrete honey and digestive juice. Insects attracted by the honey slip into the bottle, and the digestive juice inside the bottle will digest the insects. Purple pitcher plant grows almost all over the East Coast of the United States, the Great Lakes region, and southeastern Canada, becoming the most common and widely distributed bottle plant. It is also the only plant of the genus Aquarius that can live in cold temperate zones. 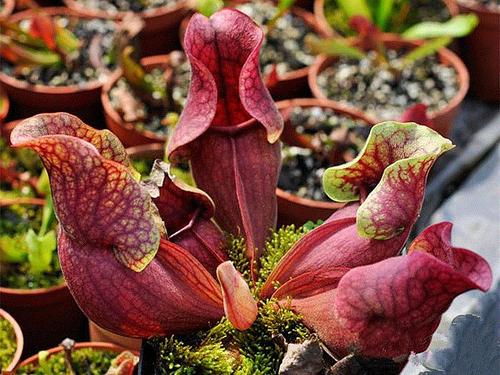 A Purple Pitcher plant is a perennial herb. From the growing points of an underground stem, the pitcher leaves grow in rosettes. The leaves are divided into two types: the trap leaves, which are used for catching insects, and the sword-shaped leaves, which are not used for catching insects. The opening of the trap leaf is upward and central in the shape of a vertical tube (also bottle or horn) and extends from the upper opening of the jar through a lid. The mouth of the jar is usually surrounded by "lips", which secrete honey and scent. The lid itself produces honey, but in smaller amounts.

The Purple pitcher plant has a trap pouch with a smooth opening and nectaries that secrete sweet honey to attract insects to come and drop into the pouch. The pouch has a smooth wall and contains digestive juices that secrete digestive enzymes to decompress the insects, which are then absorbed by proteolytic enzymes decomposedby a gland composed of parenchyma cells in the lining. In addition, Purple pitcher plants grow sword-shaped leaves in the fall and winter, which have no traps and are used only by photosynthesis to produce nutrients.

Purple pitcher plant flowers bisexual flower, Flower from the leaf base, for the loose raceme, set by a few large flowers, flower core from 1 helmet shape column head, 3 ~ 5 chamber of the ovary and 50 ~ 80 stamens, floral green to purplish red, flowers open down, sepals 5, assumes the circular, is located in the lower part of petals, leaves, higher than that of inflorescence is about 70 cm long.

The fruit of the Purple Pitcher plant is a capsule with a rough, knobbly surface. It contains a large number of fine seeds, which automatically dehiscence and eject when ripe.

Purple pitcher plant was born in a lowland marsh.

How to grow and care for purple pitcher plant

It is very important to understand the temperature required for successful cultivation of bottle grass. Generally, the temperature required in summer should be 21 ~ 35°C, and in winter 1.7 ~ 7.1°C is more appropriate. It is worth noting that all pitcher plants have the ability to tolerate light frost. Therefore, artificial cultivation, winter without moving into the greenhouse, except in extreme cold. Purple bottle plant has a long dormant period, up to 5 months in its native land. Therefore, artificial cultivation, winter should be allowed to hibernate, watering can be reduced at this time, and placed in a low temperature environment, so that after hibernation to the spring warm period, its inflorescence and leaves will grow at the same time, 1 month or so can grow into a potted plant with beautiful flowers and leaves.

Purple pitcher plants can grow in marshes in the wild and require a very wet environment for their growth to be strong. Under artificial cultivation conditions, if the waist water sets pot planting, watering can be directly poured into the pot or poured until the pot water is full. If the common pot is planted with water leakage, in the growing season, it is necessary to maintain 1 times a day and spray, in order to create high humidity environmental conditions, especially in hot summer, the number of watering can be appropriately increased to 2 times, in order to make up for the lack of hot sun rapid transpiration of water. To the winter dormant period, can be controlled watering, keep the pot planting material slightly wet.

In the wild, Purple pitcher plants grow in barren marshes, where they trap insects for supplemental food. In an artificially cultivated environment, regular fertilizing is essential for rapid growth of potted Purple pitcher plants, despite the abundance of insect sources. In general, fertilization should be applied every 3 to 4 weeks during the growth boom. The application method can be spray or drench, or dilute liquid fertilizer can be poured into the insect trap bag for absorption. When someone cultivated bottle grass, they artificially caught some dead insects and put them into their bug traps so that they could supplement the absorption of nutrients. There are even pieces of broken pork or beef into the bug bag, thinking that they can be digested and absorbed, in fact, this is the opposite, not only can not achieve the effect of nutrients, but also due to the rot of the meat to early wilt, that is, the bottle bag was corroded by rotten meat out of a big hole. Fertilization concentration of bottle grass is generally 2000-5000 times the appropriate, the application of dilute liquid fertilizer is conducive to rapid absorption of plants, especially into the trap bag liquid fertilizer should pay more attention to the concentration. Once the winter dormant period is reached, fertilization is stopped until it returns to life in the spring. 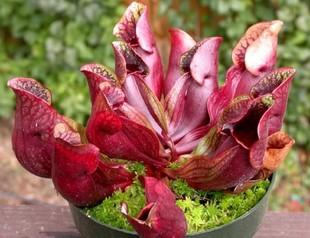 The pests and diseases of Purple pitcher plant are mainly caused by the poor cultivation environment, such as poor ventilation, too shade, too cold or too hot, and air pollution.

The disease is mainly caused by root rot caused by water moss decay. At this time, the pot should be changed in time to remove the old planting material, and then cut off the rotten roots and replant with new planting material. In addition, such as poor ventilation and overshade will be prone to black spots, at this time should change the environment, cut off the sick leaves, and then use chlorothalonil or sulphur mixture spray prevention.

Purple pitcher plant is effective insect traps, cystic pitcher has a bright color, its opening often secrete sweet honey to lure insects to eat, once deceived the insect to climb to the top, and tried to climb into the wall, across the bottle by the lining is slippery slide in a bottle, in the digestive juice into the bottle, trying to climb out of insects from the bottle, agnail hair off by walls, finally by struggling to get back into drowned in the digestive juices. The digestive juice of Purple pitcher plants contains proteolytic enzymes secreted by bottle wall gland, which can dissolve the protein of drowned insect carcass into nutrient amino acid which is absorbed by the bottle wall.

Uses of the purple pitcher plant

Purple Pitcher plants can be used as a decoration in the garden. It is more suitable for the cultivation of biological popular science materials in the school. 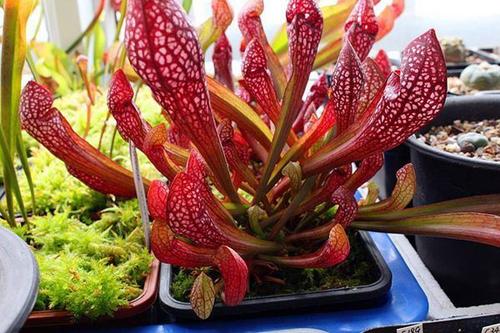