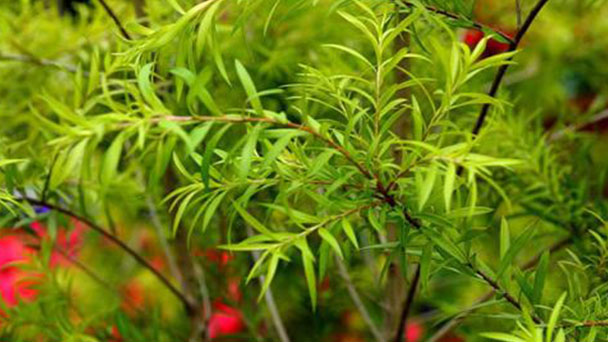 Melaleuca bracteata, also called black tea-tree, river tea-tree or mock olive, is a small evergreen tree or shrub of the genus Melaleuca in the Myrtle family. Melaleuca bracteata is native to New Zealand and the Netherlands, and can be grown from Hainan to the south of the Yangtze River and even further north in China. It is a rare and excellent landscape afforestation tree species in coastal areas.

Melaleuca Bracteata is a deep-rooted tree species with the upright trunk, lateral branches spreading to drooping, slender and soft branches, red tender branches, gray old branches, yellow leaves all the year-round, strong toughness, strong wind resistance, and good growth trend in the seaside. It is on the last century the beginning of 90-time selection breeds the mutation new species, the leaf is golden yellow or goose yellow all the year-round, it is one of the most popular in the world at present, visual effect best color leaf new species. The leaves of melaleuca bracteata are fragrant and the aromatic oil contained in them is one of the most precious cosmetics fragrances in the world. 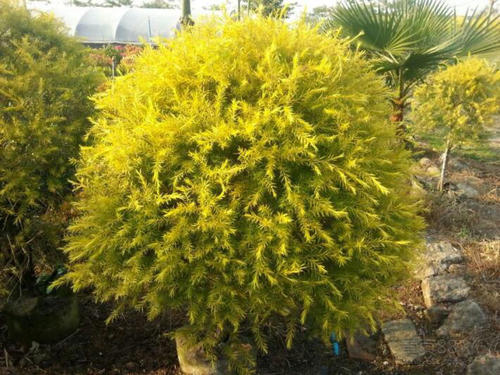 Melaleuca Bracteata is a deep-rooted tree species with the upright trunk, slender and soft branches and red tender branches. It has good tenacity and strong wind resistance, so it grows well at the seaside. In Guangzhou autumn, winter, spring three-season performance for the yellow, summer because of the higher temperature for yellow.

The leaves of Melaleuca Bracteata are fragrant and the aromatic oil contained in them is one of the most precious cosmetics fragrances in the world.

Melaleuca Bracteata also acclimates to a wide range of soils, ranging from acidic to limestone and even saline soils. Melaleuca Bracteata has a strong resistance to diseases and insects, both drought and flood resistance, suitable for waterside growth, but also salt and alkali resistance, strong wind resistance. It is a rare and excellent landscape afforestation tree species in coastal areas, especially suitable for coastal reclamation areas for afforestation.

Melaleuca bracteata grow rapidly and can be pruned into the 3-meter-high tower in 2 ~ 3 years. In 3 ~ 4 years, they can be cultivated into 5-6 cm at breast diameter and 1.6-2 meters at the base of branches. The trunk of an adult tree is 15 to 20 cm thick, 6 to 8 m tall, and forms a cone with a crown of 3 to 5 m wide. At the same time, the branch performance is good, resistant to pruning, the crown of the tree, so that the crown forms a bright golden cone, producing a strong visual effect. In addition to the natural form, usually also can be trimmed into a spherical, umbrella, hedge, pyramid shape and other various shapes.

Adapted to a wide range of climate zones, the suitable range of planting from Hainan to the south of the Yangtze River Basin and even more north of the region can tolerate -7℃ to -10℃ low temperature. Melaleuca Bracteata was first introduced to Guangzhou in 1999. It grows well all year round in Guangzhou, especially in winter. In 2000, the cold resistance tests of young seedlings were carried out in Yueyang, Hunan Province, Chongqing and other places, and all of them could survive the winter safely in the open field. The overwintering test, conducted in Chengdu in 2005, has performed consistently well.

(1) The upper pot can be used after cutting and rooting. Usually used about 10 cm of nutrition bag or seedling bowl, general seedlings with the matrix. It can also use domestic peat Gaza with 5:1 proportion mix, then joins 1 kg/cubic meter of seedling special slow fertilization.

Water and fertilizer: On the pot immediately after pouring clear water, on the pot about 15 days when the root grows out of the edge of the pot can start fertilizing, the first month with 0.5% urea 10 days once, after 1 month can be used for seedling special slow fertilization 0.5 to 1 grams/pot once a month; A 20-20-20 quick-action water-soluble fertilizer with an EC value of 1.2 to 1.5 can also be used every two weeks, and water at other times if the substrate is dry.

(1) Bag seedlings planting bag seedlings should be selected in the spring when the rain. Plant row spacing according to the planting plan to determine, generally about 2 years of nursery row spacing with 1.5 to 2 meters is appropriate. According to the size of the seedlings, dig holes, add an appropriate amount of completely decomposed organic fertilizer as base fertilizer, remove the flowerpot or nutrition bowl into the hole, with a fine soil mound in the root, and make the root system stretch, gently compaction. Pour thoroughly the root fixing water once.

(3) Fertilizer and water management after transplanting or transplanting, watering times, interval days should be determined according to the actual situation. If there are several heavy spots of rain after planting, you can reduce the amount and frequency of watering. If there are continuous high temperature and little rain, irrigation should be increased. Each time the amount of irrigation should not be too much or too little, otherwise the roots of Melaleuca Bracteata will bubble or cause root drought, which will affect the survival of the transplanted trees. After transplanting and transplanting slow seedlings, root fertilization can be carried out. Fertilizer amount can be determined for seedlings with a diameter of more than 2 cm according to size, season and growing trend, and 20 grams of ternary compound fertilizer + 10 grams of urea/plant hole application. Spring and autumn season growth faster, can be applied once a month, other seasons can be applied 2 to 3 months.

When Melaleuca bracteata is used as a street tree, the old and weak branches should be thinly removed from the trees with branches about 2 meters close to the ground to achieve a well-structured crown and beautiful crown shape, so as to improve the ornamental value. When making spherical, umbrella, hedge, pyramid and other various shapes, according to the required height, in accordance with the inherent tree shape of the gradual pruning, to promote the rapid growth of seedlings, in accordance with the predetermined tree development; Pruning with other seedlings for use as ground color blocks. 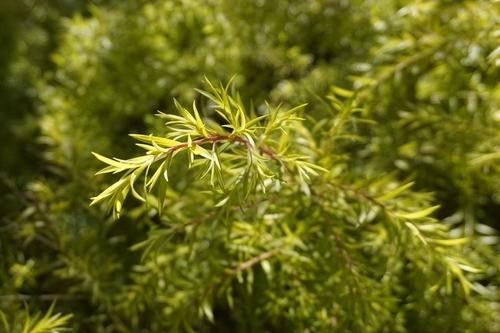 Melaleuca bracteata can be propagated by cutting (propagation by cutting) and high-altitude layering. But usually more shoots cutting, generally in April to August rain and night temperature will not be too low when.

Select the current year of the full development of semi-mature, robust growth and no pests and diseases for cuttings. To avoid evaporation, strips can be picked early in the morning. Cuttage medium can be used vermiculite and peat, or fine sand and peat. Immediately after insertion, drench in clean water.

Drug treatment: due to the relatively high humidity during rooting, it is easy to rot the leaves and stems, which can be treated with 800 times carbendazim, pectin or methyl tobutine spray.

The leaf roller can be sprayed with 1500 times longitudinalis and 500 times green BT. Aphids can be oxidized 500 to 800 times or 25% imidacloprid spray.

The distribution area of Melaleuca Bracteata

Melaleuca bracteata are mainly found in coastal soils from Australia to Malaysia.

Melaleuca bracteata are originally from New Zealand and Holland and can be grown in China from Hainan to areas south of the Yangtze River and even further north. It is more suitable in China's subtropical monsoon climate zone.

1. Melaleuca bracteata grow quickly and can be trimmed into towers 3 meters high in 2 to 3 years, and cultivated into hedges 5 to 6 cm in diameter at breast height and 3 to 4 meters in height in 3 to 4 years. The trunk of an adult Melaleuca Bracteata is 15 to 20 cm thick, the tree is 6 to 8 m tall, and forms a cone with a crown of 3 to 5 m wide. Plus its leaves are golden yellow or light yellow all year-round, so it is the first choice of trees for high fences and green walls.

The branches of Melaleuca Bracteata are good, and even without pruning, the crown of the tree forms a bright golden cone, creating a strong visual effect. If such a Melaleuca bracteata is planted in the courtyard of the community or villa, it will have a different artistic conception.

Melaleuca bracteata branches have good performance and are resistant to pruning. They can be pruned into various shapes such as balls, umbrellas, hedges, pyramids, etc. More and more people choose to use them as Garden shapes.

Melaleuca bracteata seedlings grow rapidly and have obvious characteristics of soft branches and resistance to pruning. Moreover, the combination of its golden color in four seasons with the colored-leaf trees such as red carpets as color blocks also makes the industry highly appreciate it and has begun to promote it as ground cover plants.

The leaves of Melaleuca Bracteata are fragrant and the aromatic oil contained in them is one of the most precious cosmetics fragrances in the world. 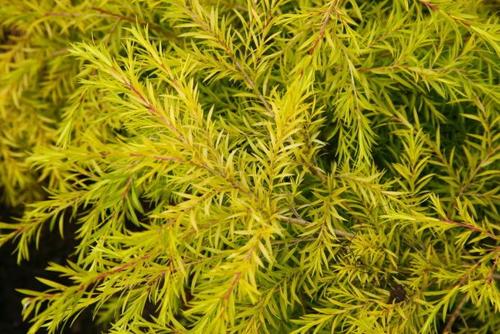