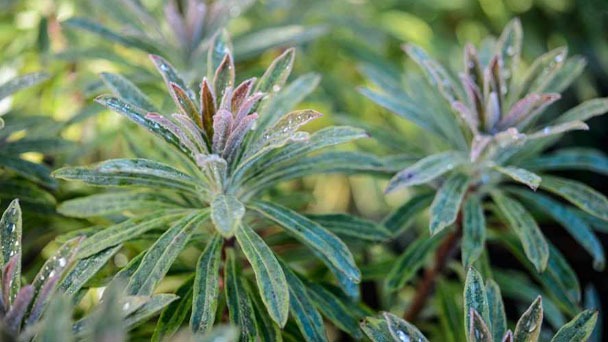 A bushy, evergreen subshrub from the family Euphorbiaceae, Euphorbia Ascot Rainbow is native to Australia. An Australian hybridizer also chose it because of its distinctive variegated foliage and ornamental flowers. 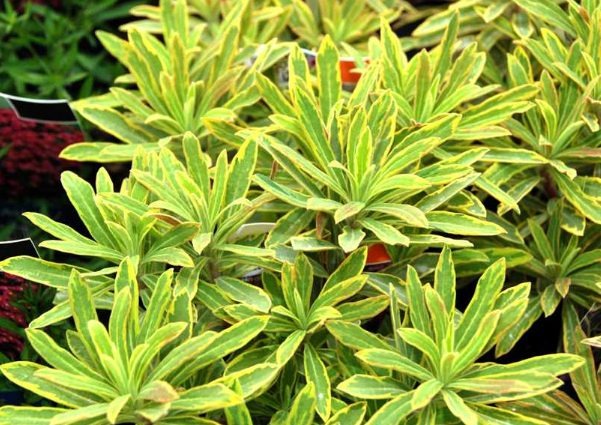 In the spring, the Euphorbia "Ascot Rainbow" blooms in clusters of variegated lime, cream, and green flowers.

This plant typically has its blooming or growing season from July to September.

When grown in the colder USDA zones, the Ascot Rainbow Spurge prefers to be in full sun.

It thrives in light shade in the warmer climates.

However, make sure to shield the plant from the piercing rays of the afternoon sun.

The USDA hardiness zones for this plant range from 5 to 9.

Furthermore, it has a high tolerance for urban and inner-city pollution.

In terms of soil type, spurges are not particular. They can grow in a variety of soils. Some species of Euphorbia can even thrive in nutrient-poor soils, requiring only that the soil be well drained. Root rot will probably result from soil that is excessively moist and prone to water retention.

From spring through fall, fertilize your "Ascot Rainbow" twice each month with 1/2 teaspoon of general-purpose, liquid fertilizer mixed with 1 gallon of water, pouring it on the soil that covers the roots. From spring to fall, how often you water will depend on the temperature, humidity, and lighting. When the top 2 inches of the soil become dry, water the plant. Check the soil moisture twice or three times per week, or every day if the plant is on a sunny indoor porch.

To maintain the health of the plants and to improve their nutrient management, damaged stems must be removed in the early spring. After blooming, it is suggested to prune back a predetermined number of stems to encourage continued flowering and the development of fresh foliage. Cut at the base of the stem when chopping one. It is very important to use gloves while handling and pruning spurges 'Ascot Rainbow', as their tissues contain milky-white latex sap, which is poisonous and can irritate the skin. 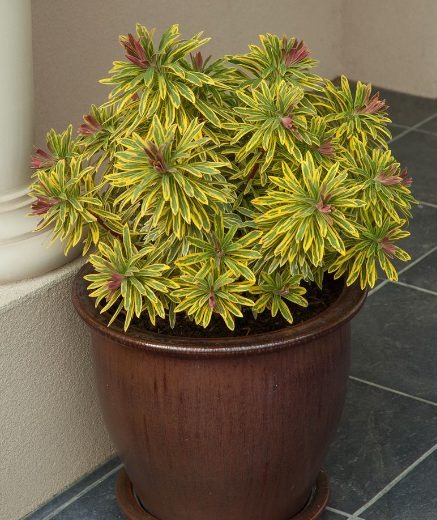 There are multiple species of powdery mildew that affect spurges 'Ascot Rainbow', but the most common is Podosphaera euphorbiae. this mildew thrives in humid environments, when the relative humidity of air around plants is high. On both sides of leaves, it exhibits symptoms in the form of white, powdery spots that eventually turn into yellowish regions. Mildew can proliferate and cover the entire surface of leaves if left unchecked.
When it comes to powdery mildew, prevention is key because, once the plant becomes infected, it is extremely difficult to get the mildew out. The best places to plant spurges 'Ascot Rainbow' have constant sun exposure and good airflow because mildew dislikes direct sunlight and needs a lot of moisture to grow. Indirectly, pruning can help prevent mildew by increasing airflow around plants and controlling humidity. There are some chemical products that can be used to treat the plants if mildew develops despite best prevention efforts, such as neem oil, copper, fungicide, etc.

Root rot is typically caused by an infected growing medium or an abundance of moisture. The best and simplest way to prevent root rot is to avoid overwatering and to grow spurges (specifically, "Ascot Rainbow") in loose, well-draining soil. In order to avoid root rot, which cannot be cured, prevention is essential. In order to create new cuttings, it is best to remove the unaffected areas and discard the remainder.
Certain spurge species provide a strong defense against herbivores with their poisonous sap and thorn-like growths, but they are ineffective against pests like mealy bugs and spider mites. Since these pests are nearly impossible to eradicate once their colonies reach a certain size, it is imperative to identify their presence as soon as possible.

Because of their tiny size, spider mites are difficult to detect until their colonies reach a sizeable number. Spiderwebs and exuviae on the underside of plant leaves are indications that a spider mite infestation is present. Successful spider mite control depends on early detection. A magnifying glass should be used to frequently check the undersides of leaves and the crevices where the stem and petiole meet.
If spider mites are found, plants should be sprayed with a solution made from rubbing alcohol and water in a 1:1 ratio. This treatment may need to be repeated several times, depending on the level of the infestation. In order to avoid any potential negative effects on plants, wait at least a week between applications.

Mealy bugs are typically found on the soft growths of the plant, such as the tips of branches and flowers. The use of chemical products to eradicate mealy bugs has been found to be ineffective. The best way to manage their presence is to inspect frequently. If there are any mealy bugs, you should brush them off the plant or spray them with either alcohol or hydrogen peroxide to get rid of them.
There are some indications of the presence of root mealy bugs, though it can be challenging to detect them. For instance, given that mealy bugs and ants have a symbiotic relationship, the presence of numerous ants in the soil around a plant may be an indication that mealy bugs are also present. Despite being impossible to eradicate, root mealy bugs can be kept under control to prevent harm to plants. The root mealy bug can be controlled with a solution of hydrogen peroxide. One part pure hydrogen peroxide and four parts water are combined to create the solution. It is poured over the soil, thoroughly covering the entire surface area. In order to get rid of any leftover eggs or larvae, the treatment is repeated after about 10 days.

It is possible to grow spurges 'Ascot Rainbow' from seeds, but due to their challenging germination and short viability, the seeds are rarely offered commercially. Spurges 'Ascot Rainbow' is most commonly propagated via cuttings.
Working with spurges 'Ascot Rainbow' cuttings requires the use of gloves, and after pruning, the pruning shears must be thoroughly cleaned to prevent accidental sap contact. It is essential to let the cuttings dry for two to three days prior to planting. this will prevent rot from developing and enable proper formation of the callus tissue. It is suggested to plant the cuttings in a soilless medium, such as peat moss, as it offers the ideal conditions for healthy root growth.
To maintain moisture, cuttings should be misted frequently, and the pots in which they are planted should be sealed with plastic or foil. To ensure adequate airflow and avoid too much moisture in the medium, the bag or foil must be removed for two hours each day. If this step is skipped, molds and rots can easily form and endanger the young, delicate cuttings' health. The cuttings are prepared for soil transplantation once they have formed a root system.

A bushy, dwarf evergreen sub-shrub with great ornamental value is called Spurges Ascot Rainbow. A stunning rosettes of lance-shaped gray-green leaves with a golden yellow edge form a mound on top of it. The majority of soil types with good drainage are suitable for planting, and you can feed the plant once a month with light to moderate fertilizers. 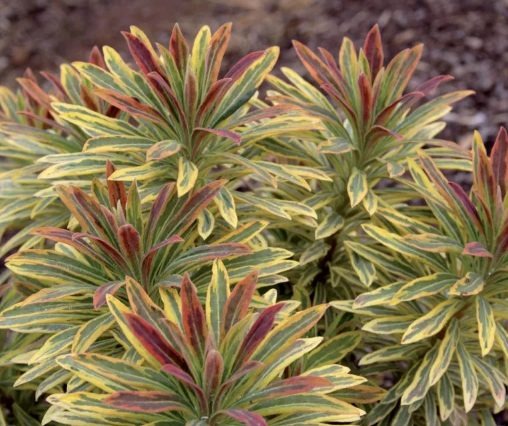 What is the Best Mulch to Use When Planting Euphorbia Ascot Rainbow?

Depending on what is available locally, we strongly advise using either ground hardwood mulch or ground cypress mulch to mulch your Euphorbia Ascot Rainbow. Any kind of mulch will do, but as it decomposes, cypress or hardwood mulch will be better quality and offer a more complete nutritional profile. Weeds will compete with your new investment for water and nutrients, so mulching helps keep them out. It's okay to cover the ground with a 2 to 3 inch layer of mulch, but be careful not to mulch the plant's stem entirely. It is preferable to leave a one-inch space between the mulch and the plant's stem or base.

How Do You Prune Euphorbia Ascot Rainbow?

The old flowers on Euphorbia Ascot Rainbow should be removed because they turn brown and look ugly. By encouraging the yarrow plant to produce more flowers through a process known as deadheading, you can maintain your plant's aesthetic appeal all season long. Deadheading is the term for this procedure. If the yarrow's central stems start to wither, prune them. To give your plant a healthier and more appealing appearance, remove these brown stems and leaves.

Are the Roots of Spurges Invasive?

The majority of spurges don't have a propensity for invasiveness. Commonly used plants for decorative gardening and landscaping are not invasive. Nevertheless, there are some exceptions. Leafy spurge (E. esula) is considered to be a very invasive species in The rhizomes and roots of this plant are very robust and tenacious. Since leafy spurge competes with other plants wherever it grows, the variety of plant species in the area is greatly reduced.

Lack of sunlight, water, or nutrients may prevent spurges 'Ascot Rainbow' from flowering. Given that they are essential for flowering, ideal environmental conditions must be offered. As they need at least 6 hours of daily exposure to full light, plants that are grown indoors should be placed in a location that receives a lot of sunlight.

How to Save a Dying Spurges Ascot Rainbow?

Spurges 'Ascot Rainbow' require very little maintenance and develop into very healthy plants, making them a fantastic choice for beginning gardeners. Ascot Rainbow only encounters a small number of issues, making it simple to identify the root of any issues that arise. A spurge variety called "Ascot Rainbow" that appears to be dying is most likely suffering from root rot that has spread to the plant's upper parts. this problem can be solved only if the rot is in early stages.
It is advised to cut off any infected plant parts. A portion of the root, the entire root, or even some of the plant's upper parts may need to be removed, depending on how severe the infection is. The parts that are unaffected can be allowed to dry for a few days and form callus tissue before being planted in the medium to form roots and grow into new plants.