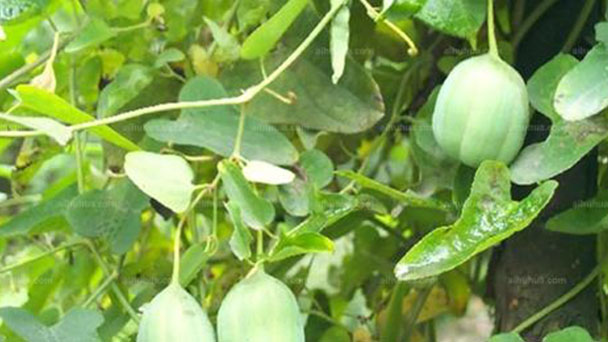 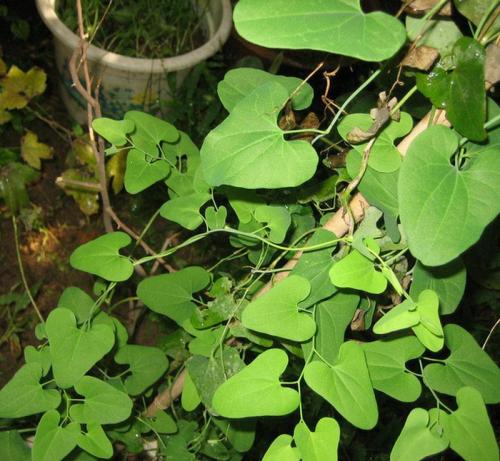 Dutchman's Pipe is a grass vine. The root is cylindrical. Stem is weak, glabrous.

Leaves of Dutchman's pipe alternate; Petiole is 1 -- 2cm long, delicate; Leaf blade is ovate-triangular, oblong-ovate or halberate, 3 -- 6cm long, base 1.5 -- 3.5cm wide, apex obtuse or shortly acuminate, base cordate, lobes rounded on both sides, pendulous or slightly extended; Dutchman's pipe has 5-7 basal veins, veins at all levels are obvious on both sides.

Flowers of Dutchman's pipe solitary or 2-clustered in leaf axils; Pedicels are 1 -- 1, 5cm; Bracteoles are triangular, easily detached; The perianth is 3 -- 5.5cm long, the base is enlarged and spherical, the tube is narrowed upward into a long tube, the mouth of the tube is enlarged into a funnel-shaped, yellow-green, the mouth has purple spots, and the inner surface has glandular hairs; One side of the eave is very short, the other side gradually extends into the tongue;Ligule ovate-lanceolate, tip obtuse; Anthocyanin affixes are near the base of the pistil column; Atrium of Dutchman's pipe is cylindrical, 6-sided; Apex of monocystis is 6-lobed, slightly papillary, lobes obtuse, extending downward to form a undulate ring.

The ecological habits of Dutchman's pipe

How to grow and care for Dutchman's pipe

Seedling of Dutchman's pipe should be frequently soil weeding. Generally in the seedling height of 5 cm, plow weeding 1 times, appropriate shallow, to avoid root injury. After the combination of top dressing and weeding again 3 ~ 4 times, to prevent grass wastage.

In winter or early spring, the amount of nitrogen fertilizer should be controlled to avoid excessive growth of stems and leaves and damage from diseases and insects. Before flowers, the manure should be mainly applied and phosphorus fertilizer should be added appropriately. In the late growth period, 750 kg of superphosphate and 150 kg of potassium fertilizer were applied per hectare in summer, which could not only improve the fruit-setting rate, but also facilitate the growth of the root system, which was an important link in increasing yield.

When the Dutchman's pipe enters vigorous growth in spring, cut off overgrown stems and tendrils without flower buds to reduce the consumption of nutrients. After the fruit is harvested in October, all the stems and tendrils are cut off, and weeds in the field are removed. Earth-raising and topdressing are carried out before winter for the benefit of heat preservation and winter overwinter, which lays a foundation for the next year's high yield.

Dutchman's Pipe is drought resistant and does not normally require watering.But when the growing period is too dry, want proper watering, rainy season wants timely drainage, lest rot root. 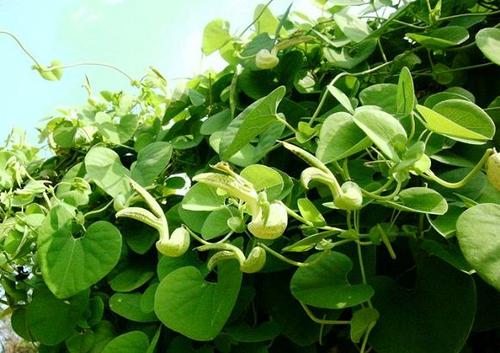 The most common disease in summer, root rot, plant death.

Pulling out the diseased plant and burning it; Spray the acupoint with 1000 times of sterilized 50% wettable powder.

More in the rainy season, leaf prone to spot. Pay attention to clean up the drain, remove the water in time, spray 1:1:150 times Bordeaux liquid.

Classification of varieties of Dutchman's pipe

It's a mainstream product of Dutchman's Pipe. Its characteristic is: is oval or long oval, the top is broader, the base is connected with a fine stalk. The surface is grayish green or grayish yellow, usually dehiscing from bottom to top along the ventral suture into six petals, the stalk also cleaved into lines. Seed majority, layers of flat superposition, four sides extend into opaque or translucent wings, flat triangular or fan-shaped, light brown edge.Brown in the center.Seed kernel milky white, oily. It has a slight breath and a bitter taste.

South Dutchman's Pipe is rare because of the saying, "Pick more fruit in the North and more roots in the South." The commodity Dutchman's Pipe has similar characteristics to the previous species, but the fruit is smaller and slightly round. The kernel is slightly heart-shaped.

Dutchman's Pipe has a mild and lasting antihypertensive effect. It is suitable for early hypertension preparations and its usage varies from place to place, and the efficacy varies slightly. Dutchman's pipe has obvious antitussive effect on the model of ammonium hydroxide spray induced cough

Landscape use of Dutchman's pipe

Dutchman's Pipe is found along country roads, in forest margins, and in thickets. In the garden, Dutchman's pipe should be planted in pieces, as ground cover plants, let it spread. It can also be used as vertical greening material for climbing low fences.

Dutchman's Pipe has been found to have serious carcinogenic effects and it is recommended that few or no plants be planted. 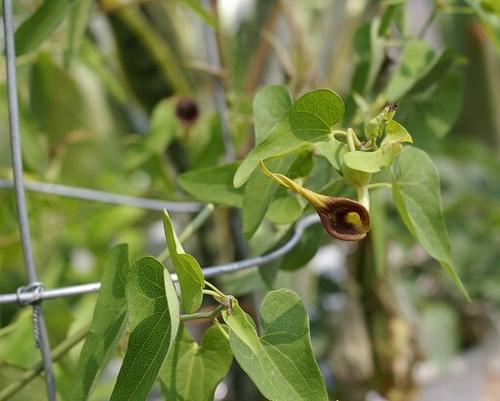