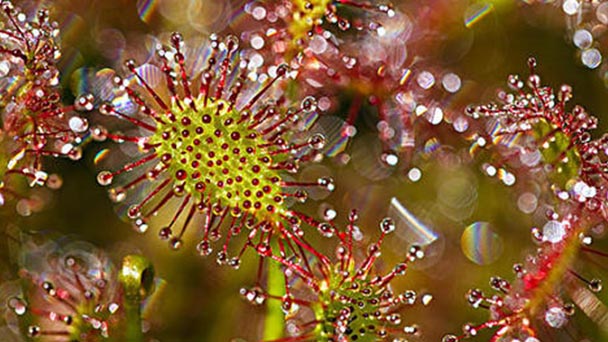 Drosera indica is a rare insectivorous flower in the tropics, belonging to the sundew family annual herb. Drosera indica can grow up to 50 cm in height, but it is common to see new plants, each of which is no more than 10 cm. Drosera indica has a habit of growing in clusters, with many young plants growing around it.

Drosera indica grows on the edge of wet open ground or paddy field below elevation of 600 m. drosera indica was produced in Taiwan, Fujian, Guangdong, Guangxi and other provinces and coastal islands. The bright green Drosera indica looks like its name, with long, thin leaves (hence the word "long leaves") that secrete mucus to feed on insects. 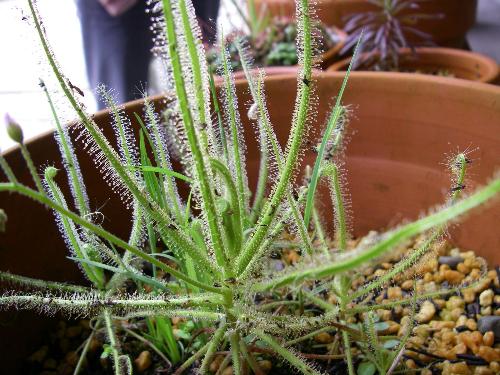 Drosera indica grows on the edge of wet open ground or paddy field below elevation of 600 m.

Drosera indica was produced in Taiwan, Fujian, Guangdong, Guangxi and other provinces and coastal islands. Drosera indica is distributed in tropical and subtropical areas of Asia, Africa and Oceania.

How to grow and care for Drosera indica

Use only rainwater, distilled water or reverse osmosis water. Drosera indica requires very pure water. Your tap water is likely to contain too much dissolved solids—minerals and salts—that may kill a Drosera indica, possibly within weeks. Always keep your Drosera indica moist, but never soggy for long, and never dry. One way to accomplish this is to water thoroughly from the top or by placing the pot in a tray of water and allowing water to soak into the medium from the bottom through the drainage hole. DDrosera indica can be kept wetter than Venus Flytraps, but it's still not a good idea to keep them too wet, especially during dormancy. When Drosera indica are very wet, they should also be warm and in the sun. Wet and cold is unhealthy (just like it is for people) and can cause fungal infections, rot and even death.

Drosera indica must have a particular kind of soil that is poor in nutrients and slightly acidic. They will very likely die in "potting soil" or soil from your Garden or yard. Their soil must be like the soil in their natural habitat: acidic and with almost no nutrients, moisture retentive but well drained. Until you learn what various types of ingredients you can have in their soil (from research on the Internet or from books, for example), it is best to use pure shagnum peat moss (no other kind of "moss") mixed with a more or less equal amount of silica sand (not beach or river or "play" sand) and/or perlite.

Most Drosera indica do well in bright light, and in general, the more direct bright sunlight you give them, the healthier and more colorful they will be. At least 6 hours of bright, direct sunlight will produce a very healthy sundew. There are some species that are exceptions however. The Drosera indica is one sundes that does better in bright indirect light.

Although experienced growers can occasionally fertilize Drosera indica lightly using special techniques such as foliar feeding, Drosera indica will probably die when fertilized by beginner growers, for the same reason that they usually die from tap water: too many minerals and chemicals. These burn the plants' roots and kill them. Drosera indica get all the nutrition they need from the sun (through photosynthesis like any plant) and from the insects they catch. If they are healthy and if you put them outside sometimes to "hunt," they will catch insects on their own. If you'd like, you can feed them captured flies or other insects (but not meat!), but they will likely catch all they need on their own. 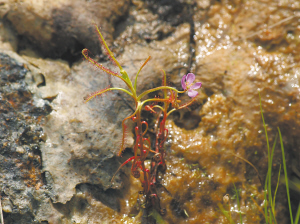 Selection and preparation of matrix

The substrate should be relatively loose, strong water-holding capacity of the substrate, the preparation of stone, coconut bran, peat and other materials, can also be used for commercial substrate seedling.

Seeds of Drosera indica have good light, germination needs appropriate light, after sowing they do not have to cover.

After sowing the substrate to often keep wet, usable fine mist spray water can also be soaked from the bottom of the plate, water to be disinfected, disinfectant available, strong chlorine net or 100 poison, relative humidity to maintain at 90% or so.

After sowing and seedling stage should not have strong sunlight exposure, you need to use 85 ~ 90% sunshade net.

Drosera indica can be given the same basic care year round. They do well in a very sunny window and do not need a dormancy period during the winter. Where they are native to rarely gets below 55°F, but nearly all species can stand temperatures down to freezing.

The purpose of Drosera indica

Drosera indica can be used as an ornamental novel potted plant, but is also used in warm areas to decorate bog gardens. 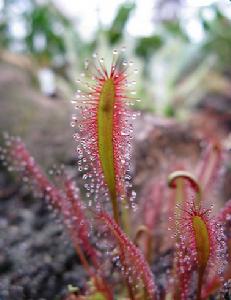