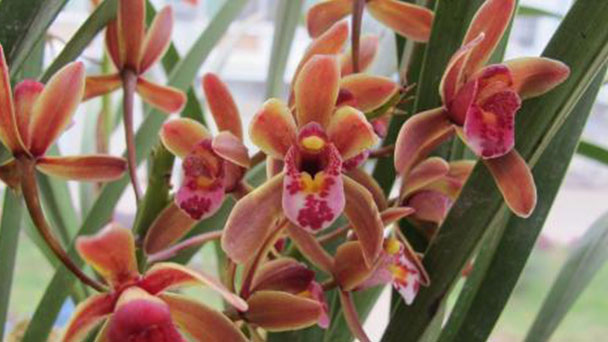 The flowers of cymbidium floribundum are 25 -- 45cm high and 0.8 -- 2.0cm wide. There are 15 -- 40 flowers. The flowering period is from spring to summer, and most of them have no fragrance. Cymbidium Floribundum for many years bulbous orchid plants, its leaves thick leather, and with luster, colorful flowers, also has a higher ornamental value of potted flowers. 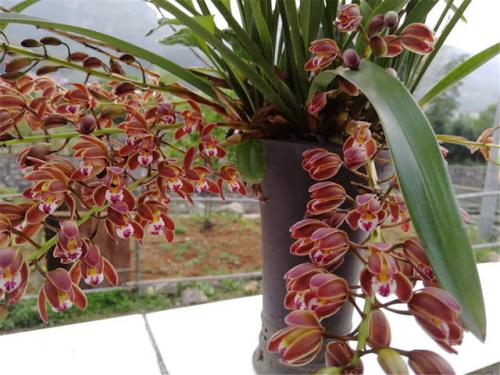 Pseudobulbs are ovoid with ribbon-like leaves. The Cymbidium Floribundum body is generally 25 ~ 40 cm long and 1.2 ~ 2 cm wide. The tip of the leaves is obtuse, the leaves are thick and the corneous layer of the leaves is obvious.4 to 6 fascicular leaves, mostly pendulous, small pseudocorms, pedicels 15 to 30 cm long, prone to oblique or drooping, dense with 12 to 40 flowers, small flowers, sepals and petals are short and round, long ovate, labellum drooping inverted. The flower color is reddish-brown, the flowering period is from March to August, and gradually stops growing after the flower fades. White flower plain heart, microstrip fragrance of horticulture.

Cymbidium Floribundum likes shade and is afraid of direct sunlight. It likes a humid environment rather than a dry environment. Cymbidium Floribundum likes a fertile environment that is rich in humus and suitable for air circulation. The climate, the environment, can affect the growth of orchids, so the choice of planting materials is different. For example, in the southern Fujian area, the four seasons of the weather are warmer, not too cold, the orchid growth rate is fast, suitable for small pebbles planting, first, save resources. Second, pebbles conducive to ventilation, not water.

Cymbidium Floribundum often grows in the humus loam deposited by stone walls and crevices. The organic matter content is high and the pH value is generally between 4.5 and 5. Cymbidium Floribundum grows vigorously in the spring and begins to bud and blossom in February. In March the flower stems are drawn out and bloom.

There are many viral diseases in Cymbidium Floribundum, mainly Mosaic disease and blight disease, which appear in orchids and other plants of the orchid family.

Common are the following: orchid leaf virus, blue square spot virus, blue ring dead virus, blue streak spot virus. Virus disease appears on the leaf in the spot of all sorts of decorative patterns or stripe, enlarge gradually make whole leaf dry black and die. It's a relatively difficult disease to cure, like cancer in humans. It is small, smaller than a bacterium, difficult to isolate chemically, and cannot be seen with a light microscope. Only an electron microscope can see its structure. Viruses are reported to be complex polymerized molecules of RNA. In general, the virus-infected by plant body is single helical RNA, coated with protein, in the shape of long tube more complex and complete virus. It propagates as a double helix. It uses proteins to guide it into the cell to form viral particles that destroy the cell and immediately replicate the toxin nucleic acid to form a protein shell.

Leaf spot disease, also known as leaf rot, mainly affects new shoots and leaves. The base of the first leaf bud appears soft rotten disease spot as if the boiling water had been the same; After the rapid expansion, become dark brown rotting large patches. At this time, if the hand is gently pulled out, the blade is readily available. Under conditions not conducive to the onset of the disease, these lesions become grayish-white in the middle and surrounded by a dark brown curve, the boundary is very clear.

Brown rust mainly affects Cymbidium Floribundum leaves with light brown or orange-yellow brown fine spots that gradually develop into black patches and eventually wither the whole leaves. By the basin, the soil is too wet or by cold invasion and cause. Spray with 500 times pentachloronitrobenzene solution or Bordeaux solution. Methods with bacterial soft rot.

Mycosis knew as white silk disease. At first, white hyphae were produced on the soil surface and the neck of the orchid stem and gradually spread to all sides. Later the mycelium becomes tangled and becomes chestnut brown or blue sclerotia. The victimized orchid stem base is waterlogged, decaying and becoming soft, later than breaking. Germinate in the soil. Prevention and control methods: disinfect the soil, burn the sick plant, spray with pentachloronitrobenzene 500 times liquid.

Also known as anthrax or black spot. Mainly harmful to the orchid leaves, initially appear brown spots, gradually expanded elliptical or semicircular slightly sunken wheel stripes.Later disease spot is dry, loose put spore, infect other leaf.Every year in the plum rain season morbidity is more, and more harm the new bud, when the serious cause the whole plant dead.Its pathogen is.Ventilation should be strengthened, water dampness should be controlled, and disinfected leaves should be cut off and destroyed immediately.

Black rot is also known as rotting. Often harmful to orchid leaves, in the heart of the most. The first occurrence of purplish-brown spots on the leaves, gradually water stains and expand, a few days later the leaves become soft and black, and soon decay off. It can also invade the base of the false bulb and leaf, making the whole plant black and dead. The pathogen was rot mold. Prevention and control can use methyl tobujin, stone sulfur mixture, copper sulfate, carbendazim, generation of zinc, generation of ammonium fungicide spraying. 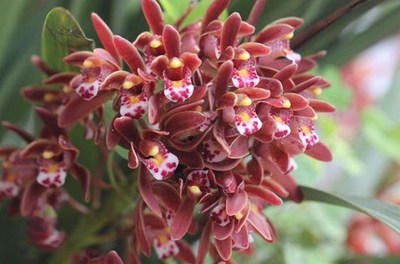 The second is wide leaf type, leaf length of 40 ~ 50 cm, leaf width of about 3 cm, this kind of effect is more common in Yunnan;

The third is lobular. Leaves are 20 ~ 30 cm long and 1.3 ~ 1.5 cm wide. They mostly grow on the karst landform and stone mountains. They have a strong ability to adapt to sunlight and can withstand drought.

The wild Cymbidium Floribundum grows on cliffs and is named for its ability to attract hundreds of bees when it blooms. Its vitality is very strong, evergreen leaves and a variety of patterns, bright colors with gold rim, Cymbidium Floribundum, also known as Taiwan orchid, is not beautiful, no fragrance.

The distribution of Cymbidium Floribundum

Cymbidium Floribundum is found in Taiwan, Fujian, Zhejiang, Jiangxi, Hunan, Hubei, Sichuan, Guizhou, Guangdong, Guangxi, Yunnan and other provinces in China (all south of the 28th parallel). Growing on tree trunks at forest margins and rocky walls by streams at altitudes from 300 m to 1600 m. Most of the orchid grow in the rock, and some attached to the tree branches.

Cymbidium Floribundum is widely cultivated in China and more in Japan.

The use of Cymbidium Floribundum

Cymbidium Floribundum is one of the ideal potted flowers with thick, glossy leaves and strong drought resistance and cold resistance. It is also of high ornamental value and colorful flowers.

Landscape use of Cymbidium Floribundum 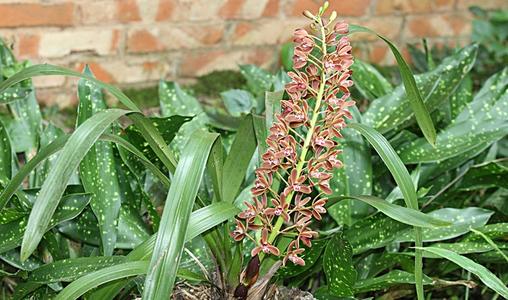