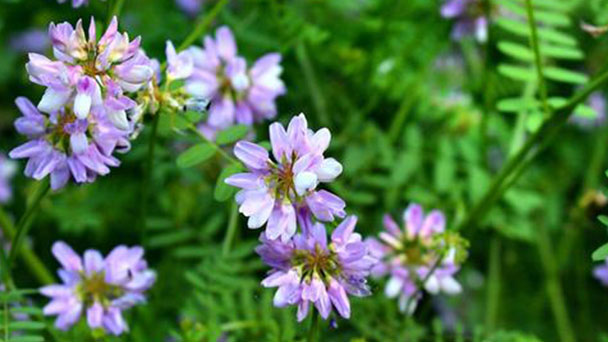 Crown Vetch (Securigera varia) is a perennial herbaceous legume. Crown Vetch is a branching, creeping plant with stolons up to 1 m long. The natural plant stands between 20 and 50 cm tall. The root system is stout, the lateral root is developed, the root has adventitious bud, has the root nodule. Leaves are odd pinnate compound leaves, alternate leaflets, 11-27 long elliptic or obovate. The inflorescences resemble crowns, and the color of the flowers is varied (i.e. from pink to later purple), hence the nickname Crown vetch. The pod is slender and finger-like, with 3-12 segments of 2-3 cm in length, which are easily broken, and each segment contains 1 seed.Seeds slender, kidney - like, black - brown.

Crown Vetch is light tolerant, shade-tolerant, and has few pests and diseases. Crown Vetch has strong growth, strong adaptability. Crown Vetch originates in Europe and southwest Asia. It has been used in China for more than 20 years and in the United States for more than 70 years. 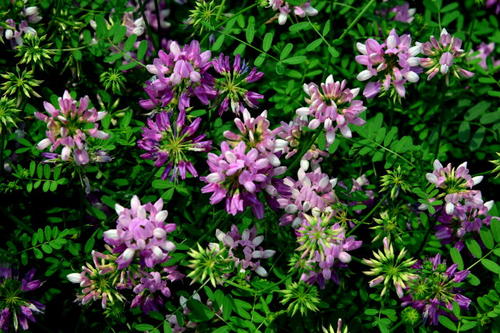 Crown vetch is a perennial herb with a strong, densely nodular root system that regenerates adventitious shoots that allow the root system to spread horizontally.

Stems of Crown Vetch are hollow, angular, soft, prostate upward, up to 180cm, branching strongly; The leaf buds on the node are easy to germinate and form many lateral branches. Odd pinnate compound leaves, alternate.

The root system of Crown Vetch is strong and developed with dense nodules. The regeneration ability of adventitious buds on the root system is strong, which can make the root system spread horizontally. Stems are hollow, angular, soft, creeping upward, up to 180cm, branching ability is extremely strong; The nodal buds of Crown Vetch are easy to germinate and form many lateral branches. Odd pinnate compound leaves, alternate. Umbel is axillary, numerous flowers, pink or reddish.

Roots of Crown Vetch are developed, taproot one year after the depth of the soil up to 80 cm, horizontal spread ability is strong, lateral roots cross more than 1 meter, the root of adventitious buds, can form new plants and underground stem. From May to July, the umbel is axillary, with 14 small flowers arranged in a ring at the top of the pedicel in a coronal shape. The Flower color changes from pink in the early stage to purple in the late stage, hence the name Crown Vetch. Fruit ripening stage in summer, pod, slender like finger shape, with obvious pod node, 2-3 cm long, a total of 3-12 segments, segments easily broken, each section contains 1 seed.

The ecological habits of crown vetch

Crown Vetch is fond of warm and humid climates. However, because its roots and buds lurk about 20cm below the surface, it has a strong ability to resist cold and overwintering. The greening period lasts about 220 days in Xi 'an and over 300 days in Wuhan and Qianjiang, and it is basically green.

Crown Vetch needs a lot of water to grow, but because of its developed root system, it can reach 1.4 meters in one year at the foot of Shaanxi highway slope, and 4.8 meters in two years. Lateral roots per square meter can reach more than 100, but also more drought resistant, generally in the annual precipitation of 400-450 mm in the place without irrigation conditions can also grow normally. Intolerant of waterlogging, the roots will rot after several days of flooding and the whole plant will die.

Crown Vetch has a well-developed root system that is used for road slope protection in the Northwest and can grow up to 1.4 m in one year and more than 4.8 m in two years. Lateral roots per square meter can reach more than 100, drought resistance is good, generally in the annual precipitation of 400-450 mm in the place without irrigation conditions can also grow normally. Crown Vetch likes adequate light, not very tolerant of waterlogging, long-term water may lead to plant death. The soil requirements are not strict, in pH5.0-8.2 on the soil can grow. Disease and insect pests are rare.

The cultivation techniques of crown betch

Crown Vetch grows slowly at seedling stage. If the slope erosion problem is not considered temporarily and the management and protection is strengthened, the coverage rate can reach over 80% within six months.In order to prevent soil erosion as soon as possible, according to different construction time and site conditions, mixed sowing with grasses can cover more than 80% of the ground within 40 days, and it takes about two years for Crown Vetch to "eat" all the associated grasses to cover the ground.Once the Crown Vetch covers the ground, it will be permanently green and brightly colored.Crown Vetch has been on the roads of Shaanxi Province for more than a decade, and has expanded to Hunan, Hubei, Henan, Hebei, Shanxi and other provinces.In the United States highway has been used for 60 or 70 years, all aspects of good reflection.

Crown Vetch is commonly used for seed propagation. It can be spread, drilled, or hill-down.

The sowing amount per acre is 0.5-1kg, spring, summer and autumn can be sown. Crown Vetch has small seeds and shallow seeding, so the soil should be carefully prepared before seeding. The hard seed rate is as high as 70-80%, seed treatment must be carried out before sowing, a small amount of seeds can be soaked in 15% sulfuric acid for 20 ~ 30 minutes after sowing, or soaked in 70-80°C warm water, natural cooling, soaking seeds for about 12-15 hours after sowing. A large number of seeds are usually sown after being crushed by a rice miller. The germination rate is generally 40-90%, and some hard grains can not bud until the second year. Seedling growth is slow, should be a timely weeding, once the successful establishment of weeds can be suppressed.

Crown Vetch likes light and can not tolerate shade, and has few diseases and insect pests. Crown Vetch has strong growth, strong adaptability, cold resistance, drought resistance, barren soil on the soil requirements are not strict, in pH 5.0--8.2 the soil can grow. Pay attention to drainage during the rainy season. Crown Vetch is easy to manage and easy to grow. 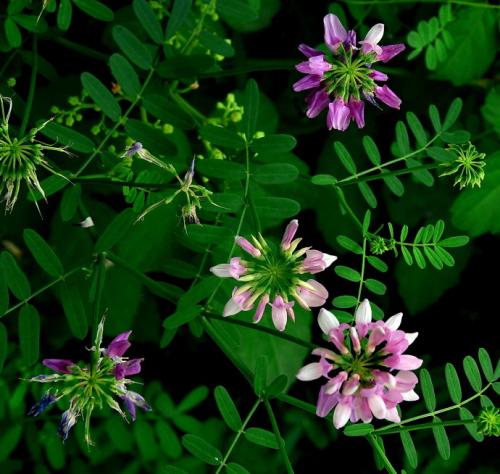 Crown Vetch is a native of Europe, Southwest Asia, Southern Europe and the Eastern Mediterranean. It has been used in China for more than 20 years and in the United States for more than 70 years.

Crown Vetch has been widely introduced and planted in North China, East China, Central China and Northwest China. Crown Vetch is a light loving plant with a temperature ranging from 15 ° C to 30 ° C. However, it is extremely hardy and can survive the winter in temperatures as low as minus 34 ° C. Crown Vetch can also survive the winter in northeastern Harbin if it is covered by snow. It has low requirements on soil, poor tolerance and extensive management. Crown Vetch can grow well in all soils with P5.0-8.2, and the best growth is in the well-drained and neutral fertile soil. Crown Vetch is drought-tolerant and waterlogging resistant. It grows well in semi-arid areas with annual rainfall of 400-600mm, but with water standing for 3-4 days, the roots rot and the plant dies.

Crown Vetch is a new type of ground cover herbage flower introduced from abroad. It has numerous flowers, beautiful flowers, bright colors, long flowering period, dense stems and leaves, high grass coverage, and long green period. The green period lasts for about 220 days in Xi 'an and more than 300 days in Wuhan.

Crown Vetch is suitable for planting in northwest and north China as well as parts of northeast and south China. Crown Vetch has been planted in Beijing, Shaanxi, Shanxi, Nanjing and other places, growing well.

Crown Vetch is beautiful in appearance, especially when in bloom, with flowers that range in color from light red to purplish red.

Because Crown Vetch's grass is tender and high in protein, it's also a good feed for livestock.

Crown Vetch, as a forage grass, has lush, tender stems and leaves, a high yield, and a rich nutrient content. Grass and hay are no less nutritious than alfalfa, both in terms of nutritional value and digestibility to ruminant livestock. Sheep prefer to eat Crown Vetch over alfalfa. However, because it contains nitropropionic acid, which is toxic to monogastric livestock, it is mainly used as forage for ruminant livestock, which is the limitation of its utilization. Crown Vetch can also be used for mowing hay, green feeding and grazing cattle and sheep.In the green feeding and grazing of cattle and sheep, it can be used from the beginning of spring, summer and midsummer until November to December every year in temperate areas, and the grass utilization period is long.

Crown Vetch fresh grass was determined to contain 75.8% water, 2.58% N2, 50.66% P2, 1.22% K2.In addition to the role of nitrogen fixation of root nods, cutting ability is good, the annual growing season 5 ~ November can be mowed pressure green, every 667m2 of fresh grass 2000 ~ 4000kg, timely mowing, can be carried out 3 times a year, with cutting with hair, turning pressure into the soil or accumulation decay into the soil. The first time is 2000kg in June, the second time is 1000kg in August, and the third time is 800-1200kg in November. Cutting time can also be carried out according to the needs of orchard production.

Pulling out the entire plant; mowing; prescribed burning may be effective against seedlings or in slowing the spread of crown vetch, but will not control large populations.

Crown vetch can be effectively controlled using any of several readily available general use herbicides such as glyphosate, triclopyr, or clopyralid at recommended label rates on the cut stems and foliage. Follow-up treatment with herbicide is likely required to control any surviving stems or new seedlings. Follow label and state requirements.

There are conflicting reports of crown vetch alternatively causing pasture bloat in livestock, and being safe for cattle to graze on. 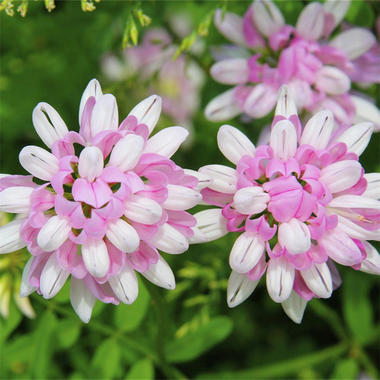