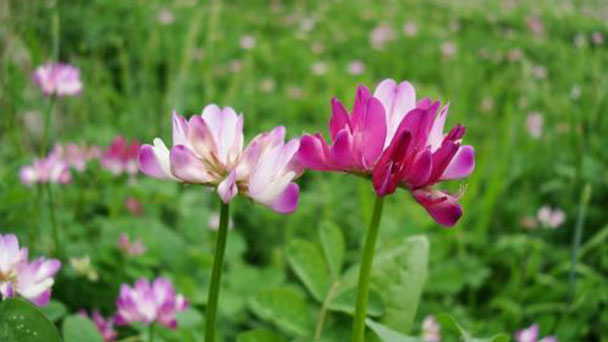 Chinese milk vetch is a biennial herb. The main root is more hypertrophic, the lateral root is shallow into the soil, the stem is cylindrical, hollow, tender and juicy, and there are sparse hairs. Leaves for the majority of odd pinnate compound leaves, flowers for umbellate inflorescence, general axillary, less top health, pod two columns, combined into a triangle, seed kidney shape, seed coat is smooth, root, grass and seeds can be used in medicine, there are dispelling wind Mingmu, spleen Yi Qi, detoxification and pain effect.

Chinese milk vetch is a plant of the Astragalus genus in the leguminous family. It is distributed in the Yangtze River region of China and grows at an altitude of 400 to 3,000 meters, mostly along streams, on hillsides and in humid areas. Currently, chinese milk vetch is being vigorously promoted in many areas of China, mainly for fertile farmland and Flower appreciation.

Chinese milk vetch is distributed in central and western Asia and cultivated as green manure in rice fields. As early as the Ming and Qing Dynasties, China has planted a large area in the middle and lower reaches of the Yangtze River, and it is widely distributed in the area of 24 ~ 35 degrees north latitude. Chinese milk vetch is one of the main nectar sources in China. 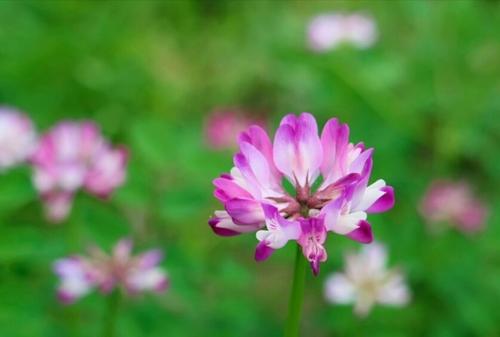 Chinese milk vetch racemes with 5-10 flowers, umbellate; Pedicels are axillary, longer than leaves; Bracts are triangular-ovate, ca. 0.5 mm long; Pedicel is short; Calyx is campanulate, ca. 4 mm long, white pilose, calyx teeth lanceolate, ca. 1/2 of calyx tube; Corolla is purplish red or orange yellow, flag obovate, 10-11 mm long, the apex is slightly concave, the base is tapering into petal stalk, shorter than the flag valve, about 8 mm long, the petal lobe oblong, with a short ear at the base, the length of the petal stalk is about 1/2 of the petal, keel valve and flag valve are nearly the same length, the petal semicircular, the length of the petal stalk is about 1/3 of the petal lobe; Ovary of Chinese milk vetch is glabrous or sparsely white pubescent, short stipitate. Pod is linear-oblong, slightly curved, 12-20 mm long, ca. 4 mm wide, shortly beaked, black, with raised reticulate;Seeds reniform, chestnut brown, ca. 3 mm long.

Chinese milk vetch taproots are hypertrophic, generally 40 ~ 50 cm into the soil. Lateral roots are shallow in the soil, so they are weak in drought resistance and strong in moisture resistance. Chinese milk vetch root nodule can be produced on the main root, lateral root and the surface of the fine roots, the lateral root in the majority. The stem is cylindrical, hollow, tender and juicy, with thin fuzz. Cultivated varieties plant height is generally 80 ~ 120 cm, the wild only 10 ~ 30 cm. Most of the leaves are odd pinnate compound leaves, with 7 ~ 13 leaflets. Leaflets of Chinese milk vetch are entire, obovate or elliptic. Flowers for umbels, generally axillary, less terminal, often 8 ~ 10 florets, family living on pedicles, arranged into a wheel. Pod two rows, united triangular, slightly curved, glabrous, apically beaked. Each pod has 4 ~ 10 seeds, seeds kidney - shaped, smooth seed coat, generally yellow-green. The thousand grains weigh 3 ~ 3.5 grams.

Chinese milk vetch can be divided into three types according to growth stage and maturity stage: early, middle and late. The taproot is hypertrophic and the lateral root is developed. Stems erect or prostrate, pinnate compound leaves, raceme near umbels, pod slender and slightly curved. Chinese milk vetch likes warm and humid conditions.Have a certain cold tolerance, the whole growth period requires enough moisture, soil moisture is lower than 12% began to die seedlings. The sandy and clayey loam with pH5.5 ~ 7.5 is more suitable for the soil without strict requirements. Salt tolerance is poor, it is not suitable to grow on saline land.Cross-pollination, high cross rate.

Chinese milk vetch likes warm climate, moist and well-drained soil grows better, and has strong shade tolerance in the seedling stage, which is suitable for interplanting in the later stage of rice.

Chinese milk vetch is fond of warm climate, generally having an obvious overwintering period. Seedlings grow slowly when the temperature is lower than 8℃; After the beginning of spring, when the daily average temperature is above 6℃ to 8℃, the growth rate is obviously accelerated. The optimum temperature for flowering and pod formation is 13℃ ~ 20℃. Chinese milk vetch grows well in moist and well-drained soil, and is afraid of early and soiled. The most suitable soil moisture content for growth is 20%-25%, and the soil is mainly light loam soil.

How to grow and care for Chinese milk vetch

Chinese milk vetch fertilizer is mainly phosphate fertilizer and potash fertilizer, and nitrogen fertilizer can be added appropriately. Different fertilizers were applied in different periods. Calcium phosphate and fecal water were applied in late autumn to promote early nodule and early seedling. Around the winter solstice, potassium fertilizer or plant ash was applied to enhance cold tolerance. Urea is applied after the beginning of spring to promote the growth of branches and leaves.

Chinese milk vetch is generally pressed green ten days after flowering and transplanting. For large-scale cultivation, an appropriate amount of lime is evenly applied to each mu to promote plant decay to neutralize acidity.

Chinese milk vetch likes a warm and humid environment, especially in the growing season, it needs sufficient water, but also pay attention to avoid standing water, so it is important to control the amount of watering, and also need to spray water regularly to keep the environment moist.

Sowing in time and appropriate

According to Chinese milk, Vetch likes to be cool and can be sown in late autumn twenty days after the late rice harvest. During sowing, it is necessary to pay attention to the treatment of soaking, drying and accelerating germination of seeds, so as to increase the germination rate.

Astragalus seeds like lots of others in the Pea family have a hard seed coating and can benefit from some scarification before planting. Many sources state that Astragalus should be scarified before planting. We never do this to our plants we only soak them and get pretty good results this way. 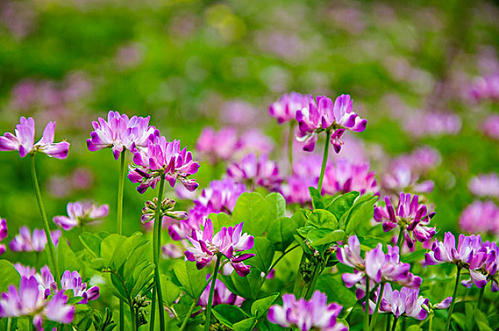 Although alfalfa and Chinese milk vetch are legumes and can both be used as forage grasses, they are two different plants.

Polysavone likes warm and semi-arid climates and has strong cold resistance. High temperature in summer is not conducive to the growth of alfalfa. Deep roots, strong drought resistance, in the annual rainfall of 250-800 mm, frost-free period of more than 100 days and areas can be planted.

The whole grass and seeds of Chinese milk vetch can be used as medicine, which has the effect of dispelling wind and improving eyes, invigorating spleen and replenishing qi, detoxifying and relieving pain.It is one of the main nectar sources in China.

Chinese milk vetch is one of the main nectar sources in China. During the flowering period, each group of bees can collect 20 ~ 30kg of nectar, with the maximum of 50kg.

Chinese Milk Vetch Honey is made of high quality honey which is made from nectar collected by bees from flowers of Chinese Milk Vetch. It is concentrated in vacuum and low temperature to maintain the nutrition and active ingredients of honey.100% natural, sweet and nutritious.

Chinese milk vetch has strong nitrogen fixation ability and high nitrogen utilization efficiency, and the plant decomposition can stimulate a great amount of soil nitrogen. Therefore, under the condition of equal nitrogen amount, the yield increase effect of vetch is better than that of green fertilizer crops such as vetch and broad bean, and Chinese milk vetch is of great significance to maintain the agricultural nitrogen cycle in the agricultural ecosystem of southern China.

Chinese milk vetch is not only a green fertilizer crop, but also can be used as forage feed or mixed hay. It has good palatability, and all kinds of livestock like to eat it, and has high nutritional value. Chinese milk vetch can be used as high quality green feed and protein supplement feed for livestock, and the effect of feeding pigs is better. It can be mowed 2 ~ 3 times a year, and the yield of fresh grass per hectare is generally 22,500 ~ 37500kg, and the highest can be up to 60,00kg. Chinese milk vetch can also be used as both green manure and forage grass. The upper 2/3 is used as feed for pigs, and the lower 1/3 and root are used as green manure. After 3 years of continuous cropping, soil organic matter can be increased by 16%, which is far higher than that in an idle winter.

Due to the high nutrient content and feed value of Chinese milk vetch, it is used for winter green manure planting in rice fields in southern China.

Chinese Milk Vetch is distributed in the Yangtze River region of China, growing at an altitude of 400 to 3,000 meters, mostly along streams, on hillsides and in humid areas. At present, Chinese milk Vetch is being vigorously promoted in many areas of China, mainly used for fertile farmland and flower appreciation. 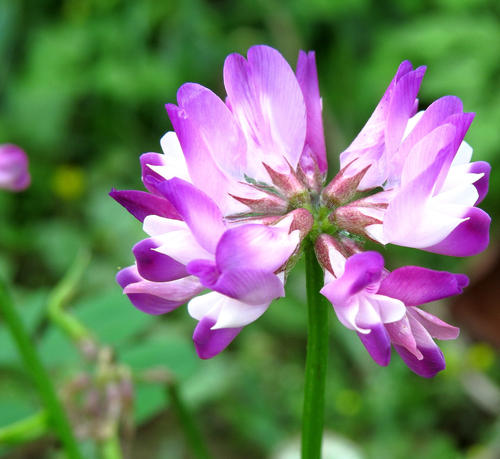