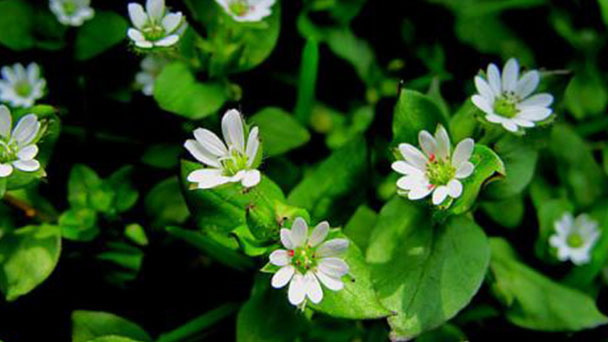 Chickweed (Stellaria media) is a common field weed of the Dianthus family and Chickweed genus, annual or biennial herbs, with a height of 10-30 cm. Chickweed stems are tilted or ascending, more or less branched at the base. Chickweed prefers mild humid environments, Yunnan generally grows vigorously in the rainy season, and can also be seen in winter. The suitable growth temperature is 13 ~ 23℃, and can adapt to light frost.

Chickweed is distributed in temperate regions, in the range of 500 ~ 3700m in the middle and low altitude and middle and high altitude areas of Yunnan, mainly on the hillside, under the forest, near the field and along the road.

Stem of Chickweed is prostate slender, giving birth on the section most upright, branch cylindrical, Succulent and crisp, break hollow, stem table a side has a line of pubescent, the rest part is hairless.

Leaves of Chickweed are simple opposite; Upper leaf is sessile, lower leaf sessile; Leaf blade is ovoid or ovate, 1.5 -- 2.5cm long, 1 -- 1.5cm wide, apex acute or mucronate, base subtruncate or shallowly cordate, entire or undulate, glabrous on both surfaces.

Seeds of Chickweed are numerous, black brown; The surface is densely verrucous with small protrusions.

Chickweed likes mild and humid environments. Generally, it grows well in the rainy season in Yunnan and can also be seen in winter. The suitable growth temperature is 13 ~ 23℃, and can adapt to light frost.

Chickweed is distributed in temperate regions, in the range of 500 ~ 3700m in the middle and low altitude and middle and high altitude areas of Yunnan, mainly on the hillside, under the forest, near the field and along the road.

Chickweed is an extremely prolific plant, filled with white star-shaped flowers and scattered with tens of thousands or even millions of seeds all year round.

Chickweed is a malignant weed in summer crop fields in China, especially in low-lying fields, which occurs in all summer crop fields in China. The Yangtze River basin is the main area of the occurrence and damage. Serious damage was reported in the northern part of South China and Southwest China. In addition, there were also reports in North China and Northeast China, but the damage was not serious.

The main characteristic of Chickweed harm is that in the early stage of crop growth, it competes with crops for water, fertilizer, space and sunshine.In the later stages of crop growth, rapid creep and hinder crop harvesting, especially mechanical harvesting.

Chickweed can be treated with ipranone for soil treatment, and can also be treated with herbicide for stem and leaf treatment in later stages. Wheat field Chickweed (cattle Chickweed) can also be treated with ipranon. In addition, the stem and leaf treatment agents, such as phenylsulfuron, chlorofluropyroacetic acid, 2 methylene 4 chloride, metasone, zoloxone, chlorofluroxane, bromophenonitrile and their mixes, as well as difluorozozopyrimethamine (meici) and sulfamide (preferred), which were suitable for controlling broad-leaved weeds in wheat field, all showed different degree of control effect on Chickweed and bovine Chickweed. In recent years, wheat field Chickweed and cattle Chickweed in middle Jiangsu and other places developed strong resistance to benzulonon, and the control effect decreased after using the drug. Chickweed was very resistant to zoloxone, and cattle Chickweed was also very resistant to zoloxone. 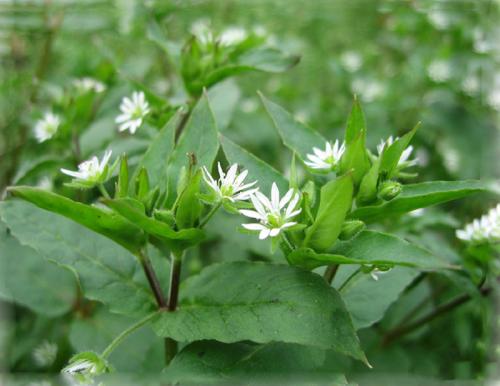 A taxonomy of Chickweed varieties

Chickweed grows in the area of 300 m to 3,900 m above sea level in the world and in the whole country of mainland China. It grows as a weed in the field and has not been artificially introduced and cultivated.

How to control chickweed

The best way to control chickweed is by pulling as much of it out of the ground as possible by hand. Both species have shallow roots and can be easily removed by hoeing or hand pulling. However, since new plants can develop from mouse-ear rootstock, removing the entire plant is how to kill chickweed.

Chickweed stem is fine and soft, but the vitality is strong, there is no artificial cultivation, vegetable field side propagation fast, rarely see its infection disease, the stem and leaves for grass green, so its appearance of good commercial property, feeling very "soft", is a kind of very popular with consumers without pollution, high quality of wild vegetables.

Chickweed is a poisonous plant included in China Plant Atlas Database. Its toxicity is poisonous to seeds, stems and leaves. Cattle, sheep and other livestock after a large amount of food in the gastrointestinal tract, Chickweeds are easy to ferment and form lumps, so there are a series of corresponding symptoms such as abdominal distention and abdominal pain. 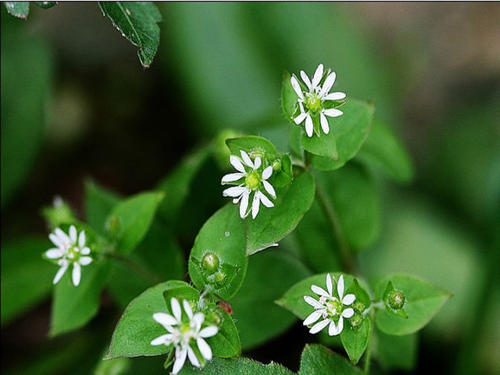