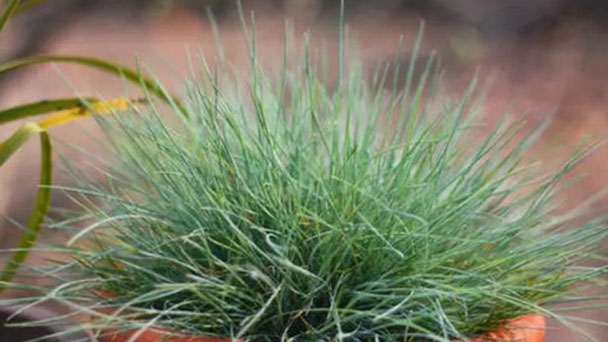 Blue fescue (Festuca glauca) is an evergreen herb of Gramineae Festuca, and it is of cold season type. Blue fescue plant height is about 40cm, plant diameter about 40cm. Leaves are erect smooth, strongly indenture a few acicular or hairy, bluish-green, silvery glaucous. It is blue in spring and autumn. 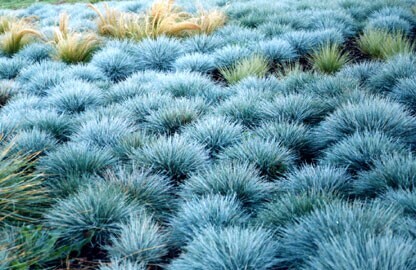 Blue fescue is erect smooth, leaf blade strongly coiled into a few needles or hairlike, blue-green, with silver glaucous. It is blue in spring and autumn.

The ecological habits of blue fescue

The most famous Blue ornamental grass is the dwarf blue fescue (Festucaglauca), consisting of several species, the bluest of which is' Ellie 'Blue Blue fescue (F.G.' ElijahBlue '). This is a tufted evergreen cold-season ornamental grass with soft needle-like leaves that are silvery blue in summer and greener in winter. Its crown is twice the height of the plant, forming a round cushion about 30 cm high. (There is also a variety with a smaller cluster, but the larger one is the true 'Ellie' Blue fescue.) In late spring and early summer, it produces delicate panicles of the same color as the leaves, turning pale brown when it is firm. Some people like the contrast in color; those who don't cut the inflorescences.

Blue fescue is about 15cm to 23cm high at a young age, low, dense and cushion-like, and its crown width is equal to its height. But as the years go by, it gradually expands outward, and the center dies, leaving a blue ring that continues to grow outward, eventually forming individual clusters. To avoid this phenomenon, the plant should usually be dug up after 2 to 3 years for splitting. This also helps with color retention, as the blue of the plant is best displayed when it is young and vigorous.

How to grow and care for blue fescue

Blue fescue is a kind of soil that is very resistant to poor soil and likes to grow on dry soil, so the drainage capacity of the soil must be strong. It is better to use weakly acidic soil, which will be more conducive to the growth of Blue fescue.Can use carbon ash, leaf rot soil, small stone mixed soil, not only dry drainage is better.

Blue fescue does not have a high demand for water. If it is maintained outdoors, it can basically rely on the weather for food, and if it is kept indoors. After watering Blue fescue once, it can basically be spaced for a week. Of course, water mist can be sprayed more indoors to make its nutrition more balanced.

Blue fescue does not require very high fertilizer. Only in the peak growth season of Blue fescue, the growth can be guaranteed by applying a thin liquid fertilizer once a month. (Find more fall plants here.)

Blue fescue is a kind of plant that loves light very much, so Blue fescue should be placed in a place facing the sunlight to receive the irradiation. During the growth period of Blue fescue, only after long-term exposure to light will the leaves become curly. In the absence of light, Blue fescue will grow straight.

Blue fescue should be placed in a well-ventilated place for growth, which can effectively prevent diseases and insect pests. Blue fescue is suitable for growth at cool temperatures, and spring and autumn and winter are the seasons for its growth. Once the summer temperature is too high, it will enter the dormant period to stop growth, winter is too cold, of course, also want to move indoors, will inevitably be frozen to death.

To maintain Blue fescue is simply to appreciate its leaves and unique appearance. If we want a beautiful appearance, we need to trim it by ourselves. Every spring and autumn, we need to prune Blue Fescue to remove excess branches and weak branches to maintain its perfect body shape.

Prevention of diseases and insect pests

Blue fescue is a very beautiful plant. At this time, people should pay attention to the prevention and control of diseases and insect pests of Blue fescue. Such as leaf spot disease, blight disease, aphids and harmful mites all pose threats to Blue fescue, so fungicides and insecticides should be selected to kill them for the first time! 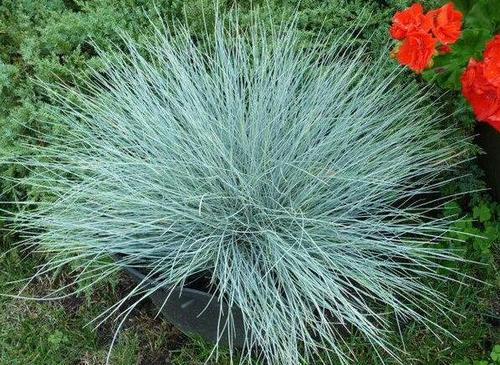 Within a few years, blue fescue will begin to develop brown areas in the center of the clump, and will soon die away altogether unless lifted and divided. This plant rarely lives past three to five years unless it is divided.

Pry the dying plant up out of the ground with a Shovel or a garden trowel.

Cut the clump in half, prying away the brown center portion of each smaller clump.

Replant the two new clumps as new plants, spacing them 8 to 10 inches apart.

The distribution area of blue fescue

Blue fescue is produced in Guangxi, Sichuan and Guizhou in China.

Landscape use of blue fescue 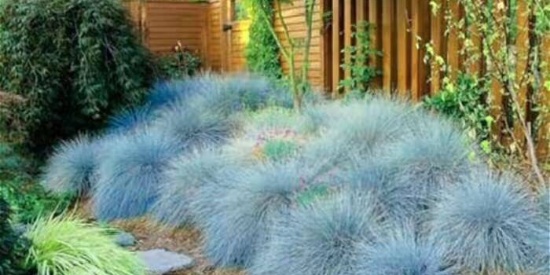