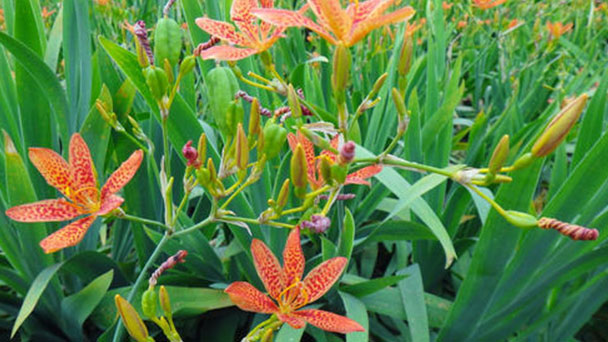 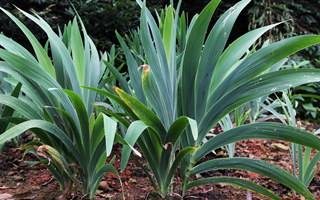 The leaves of blackberry lily are alternate, imbricate, sword-shaped, 20-60 cm long, 2-4 cm wide, the base of which is scabbily operculate, the top of which is acutely acute, without midrib.

Capsule of Blackberry Lily: obovate or oblong, yellowish-green, 2.5 -- 3 cm long, 1.5 -- 2.5 cm in diameter, unbeaked at the top, often with a wilting perianth, locularis dehiscent at maturity, fruit petals valgus, with an erect axis in the center; Seeds of blackberry lily are globose, dark purple, lustrous, ca. 5 mm in diam., borne on fruit axis.

The ecological habits of blackberry lily

Blackberry Lily grows at the edge of forests or grasslands on hillsides, and most of them grow at low elevations. However, it can also grow at an altitude of 2000-2200 meters in southwest mountainous areas.

Blackberry Lily likes warmth and sunshine, is resistant to drought and cold, and is not strict in soil requirements. blackberry lily can be cultivated on dry land on hillsides, so as to be fertile and loose. The sandy loam with higher terrain and good drainage is preferable. Neutral loam or slightly alkaline soil is suitable, avoid low-lying land and saline-alkali land.

How to grow and care for blackberry lily

Warmth is most suitable for blackberry lily, can always be maintained between 15 and 28 degrees. In addition, because its ability to withstand cold is relatively strong, so the winter generally does not take special measures, except in the very north of the region. However, the temperature as far as possible not too high, will affect its growth to a certain extent.

blackberry lily likes light, so needs to provide good sunshine. When it is growing at its fastest rate, try to keep enough light to meet its requirements. However, in the summer, try to get a little shade, especially at noon.

blackberry lily is not waterlogging resistant. Therefore, not only can not water too much at ordinary times, resulting in water, in the plum rain or other rain time but also pay attention to timely drainage.

The first is to top, so that the nutrients can concentrate on its roots and stems, effectively improve the yield of about 10 percent. And when its leaves wither, blackberry lily needs to be cut off in time, which is also to avoid consuming too many nutrients.

Growing blackberry lilies in containers is a great way to "stage" the plants when they come into bloom: Before blooming, place the containers in an out-of-the-way spot, as the foliage is not much to look at. When the blooms begin, move the containers to a prominent spot on the porch or patio where you can enjoy the flowers.

Plant up two or three blackberry lilies in the same pot to give a full look. Use well-drained potting soil. Arrange the rhizomes close to the soil's surface so that they are not touching. Divide and repot the lilies as they expand and become crowded. Repot in late summer, when growth slows down.

In cold climates (freezing temperatures and snowfall), the dormant plants in their pots can usually be stored in a sheltered but cool area for the winter. Zone 5 gardeners, however, may find that potted blackberry lilies perish over the winter unless moved into a garage or basement. 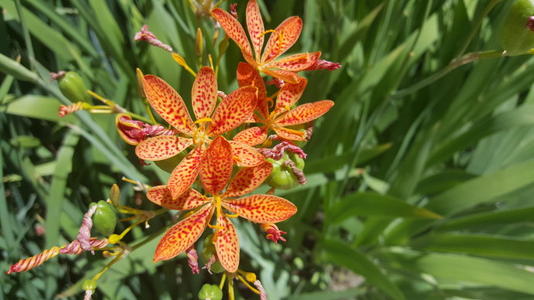 How to propagate blackberry lily

Similar to the way that iris or daylily rhizomes can be divided, you can propagate blackberry lilies in the same way—by digging and dividing the root clumps. This is best done when the flowering is over and the plants are mostly done growing. Dig up plants, and use a sharp knife to cut apart pieces that have a fan of foliage attached. Replant them in the desired locations at the same depth.

Periodic division is also a good time to inspect the roots for borers and cut away any diseased or rotting sections.

Disease control and pest control: the main disease in the seedling period is rust.

Prevention and control measures: First, increase the application of phosphorus and potassium fertilizer, improve the resistance; Two is the onset of early spray 15% powder rust would rather wet powder 1000 ~ 1500 times diluent or 12.5% Wo Wet powder 3000 times liquid, every 7 ~ 10 days spray 1 time, even spray 2 ~ 3 times.

It occurs in both seedlings and adult blackberry lily, but the adult plant occurs early, harms the leaves in autumn, and shows brown ridges.

Prevention and control measures of root rot: pull out the diseased plants, disinfect soil with lime powder in the diseased holes and areas, and spray the plants with Bordeaux liquid.

The control measures of the citrus dwarf scale were as follows: destroying the insect strains; Spray 3% acetamprid 2000 ~ 2500 times solution or 48% Lesbon emulsion 1000 times solution once every 7 ~ 10 days for 3 times.

The prevention and control measures of the ground tiger: medium plowing and weeding; Artificial capture; With 90% crystal trichlorfon 800 ~ 1000 times the liquid irrigation, with poison bait, light, such as dung kill.

The control measures of white grubs are as follows: they can be killed by poison bait, light and dung. The water was irrigated with 25% parathion microcapsule 500 ~ 800 times liquid.

The prevention and cure method of mole cricket: reasonable irrigation, prevent and cure with poison valley.

Monocotyledons a family of the subclass Liliforma. Herbs perennial or 1-year-old. Having a rhizome, corm, or bulb; All are fibrous roots. Leaves are striate, sword or filiform, veins parallel, base sheathlike, compressed on both sides, superimposed. Flowers are solitary or raceme, spike, cyme, or panicle; Flowers are bisexual, brightly colored, actinomorphic or bilateral; Perianth segments 6, arranged in two circles, base united into perianth tubes;

It is found in Northeast, North, Central China, Sichuan, Xizang and other provinces. North Korea, the former Soviet Union, India and other countries have it.

Originating in southern Europe, it has been cultivated in China. Herbs perennial. Corm oblate globose, outsourced with yellowish-brown membranous envelope. Leaves are basal, striate, grayish-green, margin rebounding; The flower stem is very short and does not protrude from the surface.

The distribution area of blackberry lily

All species of Iris are considered class 2 (minor toxins causing stomach and intestinal upset) and class 4 toxins (causing dermatitis reactions) for humans, according to official lists of poisonous plants. These plants are somewhat more toxic to dogs, cats, and other animals. The primary toxins are thought to be irisin and certain pentacyclic terpenoids.

Poisoning in humans is more common than you might think since this plant has a long history of being used in folk medicine. People who consume the plant in this way without training may experience stomach upset.

In humans, consumption of plant parts, especially the roots, can cause diarrhea and vomiting. The plant is somewhat more toxic to animals, where ulcers of the stomach and small intestine have been known to occur. Though most symptoms are relatively minor and temporary, a seriously ill pet should be brought to a veterinarian. Treatment may include induced vomiting, and treatment with activated charcoal to absorb the toxins. Most often, though, symptoms are mild and quite temporary.

The use of blackberry lily in gardens 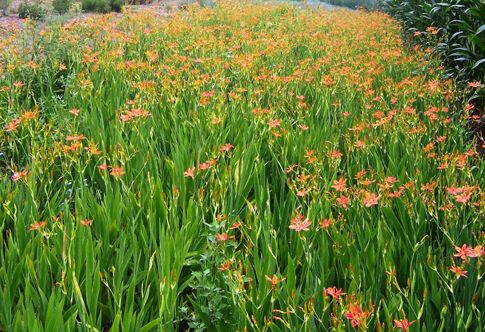