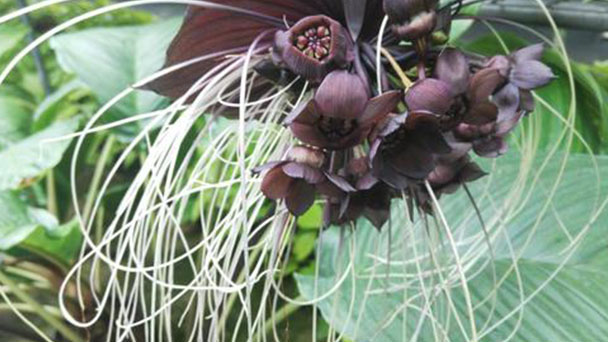 Bat flower (Tacca chantrieri) is a kind of perennial herb in the family Tuber. Bat flower is a remarkable flower plant in the tropical rainforest.

Bat Flower is a kind of ornamental plant, mainly distributed in South and Central Asia, and is suitable for growing in warm climates. Known as ghostly plants due to their unique flower shape, they are also considered "unlucky" flowers in Malaysia, where their dangling Fruit looks like an upside down bat.

Bat flowers are native to Yunnan, Hainan, Guangdong, Guangxi and other places. They grow near water or in wet places under rain and shade. Bat flowers are rare plants for flower appreciation, foliage observation and medicine. 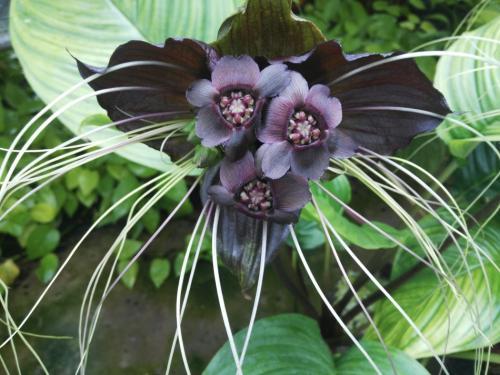 Bat flower is a rare leaf and flower observing plant. Its flowers are purplish brown to black, which is rare in the plant kingdom. Its shape is unique, and dozens of purplish brown filaments can grow out of the flower base, which is very similar to the whiskers of tigers. Bat flowers are shade - loving, not resistant to strong light, often born in low mountains and valleys under the dense forest or stream swamp.

In nature, the petals of Bat flowers are very colorful, such as red, orange, yellow, green, cyan, blue and purple, but the plants with black petals are very rare, and Bat flower is one of the rare ones.

Flowers and leaves of Bat flowers are all beautiful, both considerable flowers, and considerable leaves, leaves cluster, a bit like taro, perennial green; Flowers are purplish brown to black, rare in the plant kingdom, and unique shape, petals at the base of several dozen purplish brown filaments, very like the tiger's beard, so the name.

Bat flowers are yellow and white with tufted roots; Stem is proximally erect, distally climbing or prostrate, slightly pilose. Leaves are papery to leathery, ovoid, sparsely oblong, 2-4.5 cm long and 1-2.5 cm wide, rounded at apex, mucronate, rounded at base, glabrous; Lateral veins ca. are 4 on each side, flattened on both sides; Petiole is 2-5 mm long.

The ecological habits of the bat flower

Bat flowers are fond of warm, humid and semi-cloudy environments. In South and Southwest China, they are generally distributed in low mountains, valleys, dense forests or wetlands near streams, and do not select soil. In southern greenhouse cultivation, overwintering temperature should not be less than 10℃. The temperature is greater than 25. Over 2 years of planting. Flowering ability is super 1 leaf 1 flower. Basically you can get more than 2 shots. Growth is rapid, and the first flask can be seen when the temperature is over 25 ° C for 11 months.

Bat flowers like shade, can not tolerate strong light, often born in low mountains, valleys, dense forests or marshes near streams. In the 1999 Kunming International Horticultural Exposition held in Kunming in 1999, Bat Flower, as the exhibited flower in the greenhouse, made a great splash and won the gold medal. Due to the increasing destruction of the natural environment, the habitat of Bat flower is also becoming worse and worse. Bat flowers are now in danger and are classified as the third-level protected plant by the state.

Bat flowers are generally distributed in low mountains, valleys, dense forests and creek swamps in South and Southwest China, and do not select soil. In southern greenhouse cultivation, overwintering degrees should not be less than 10℃. Bat flower is a perennial herb of the Dioscorea family, also known as Dioscorea, tiger flower, mountain rhubarb, etc.

The propagation of bat flowers

Bat flowers mainly propagated by splitting, and splitting was carried out in spring when changing pots. Such as potted, must maintain sufficient moisture in the basin soil, avoid basin soil water, often sprinkle water around the plant, and a small amount of spray to the foliage, winter should reduce watering.

How to grow and care for bat flowers

Watering: Allow soil to dry out between waterings. Water thoroughly until the well draining potting soil is completely saturated and water runs out the bottom of the pot. Try submerging the whole pot and plant into a bucket of water until all air bubbles stop. Drain off excess water. Overwatering and wet soil will cause root rot.

Fertilizer: Feed the bat flower with a balanced liquid fertilizer at 1/3 strength every two weeks during the growing season or a slow release fertilizer.

Pruning: Remove old leaves as they die off. 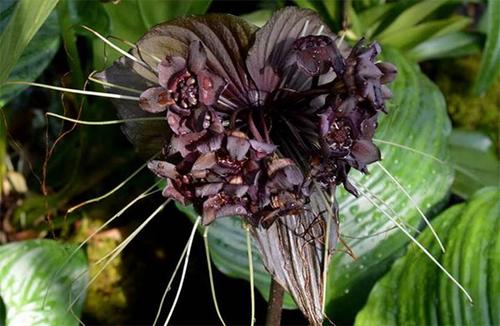 Where to grow bat flower

Bat flowers naturally grow in the damp shadows of the tropical jungles in Asia, so it's no wonder that they require warm, humid shade to thrive. Mimic their natural environment by growing them in low light conditions of 40–60% shade, such as under trees or next to walls.  bat flowers perform well in both the ground and containers, but need light, loamy, nutritious, and well-drained soil. Additionally, the large leaves will tatter and burn if exposed to wind, so be sure to provide some protection and keep indoor Tacca away from heating or cooling vents.

When to grow bat flower

Blooming from late spring until early fall,  bat flowers can be grown year-round indoors in containers and should be planted in spring. When planted within their hardiness zones of 9B–11,  bat flowers can remain in the ground, undisturbed over the winter. In colder regions, bring your potted plant inside, where it will stay handsome all winter long.

Bat flowers are easy to grow, strong and free of pests and diseases.

Other species of bat flowers

Bat flowers, with finely reduced leaves once in a while 4′ foot long, are grown in the tropics as a supply of arrowroot, which is acquired from the floor tubers or rhizomes. It has greenish and purplish flowers.

Bat flowers develop from rhizomes as understory flowers native to tropical forests and subtropical rainforests of Central and Southeast Asia.

Almost all flowers have been labeled as beautiful, lovely, captivating, and the likes. But have you ever heard of a mysterious, nearly scary, peculiar plant?

Other than being fascinating, Tacca chantrieri or the Bat Orchid is no doubt a best instance of a mysterious, nearly scary, extraordinary plant.

The distribution region of the bat flower

Bat flowers are distributed in South and Southwest China (Guangdong, Guangxi, Yunnan), and also from India to Vietnam.

Uses of the bat flower

Bat flower is a kind of ornamental plant. The fine bracts are dozens of centimeters long, purplish black, graceful and drooping, shaped like tiger's beard. The whole inflorescence looks like a tiger's face. 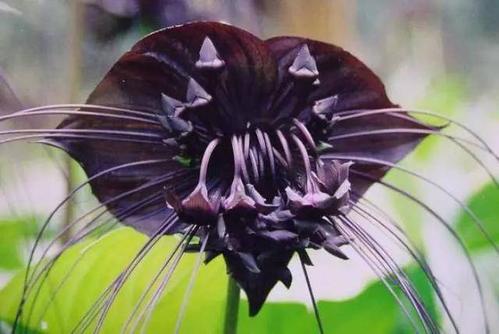