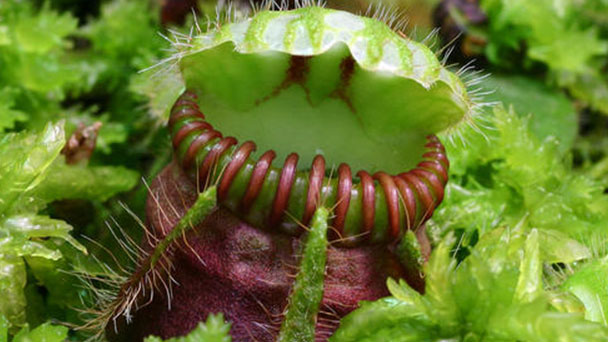 The trap of australian pitcher plant is similar to some species of pitcher plant, but unlike the pitcher plant, the stem is attached to the trap at the top of the back (the joint is at the bottom of the bottle). The cap is hairy and beautifully striped, and the mouth has a radial projection to form a groove that sticks out from the inside of the mouth to form a spiny object. The length of the cage varies from 4mm to 4.5cm, but most are around 3cm. In some individuals, the cages can grow up to 8cm in size. The cages are green in shade and colorful red and purple in light, but too much light can affect the size of the cages. 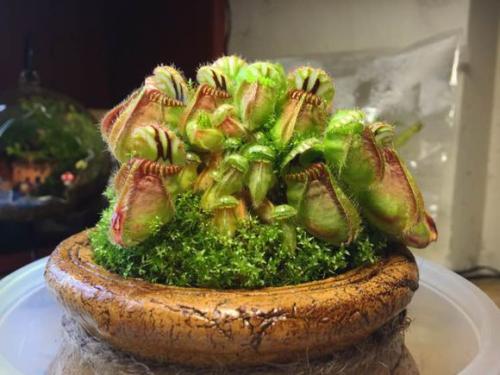 Australian Pitcher Plant (Cephalotus follicularis), a single genus and single species, is native to wetlands in south-western Australia. The first impression I got was that the plant was lovely. There were several chubby little brothers sitting on the grass in the sun. It looked like a fairy tale. Australian pitcher plant is found only in Australia. The leaves are shaped like little bottles with a lid.Insects that fall into it will melt and disappear over time. Perhaps the plant gets its food from insects. Pest trapping method: passive bag trapping. Caps can't move. The pouch and lid are purplish red in strong sunlight, and there are transparent Windows on the lid to attract insects. There are glands in the inside of the bag, and the mouth of the bag is slippery. Insects staying on the outside edge of the bag are easy to slip into the bag, and drown in the liquid inside the bag and be digested by the digestive juice.

How to grow and care for Australian pitcher plants

When the temperature is below 18℃ and the humidity is above 90%, Australian pitcher plant can be in full sunshine. The bug bag is red, but small. When the humidity is low, Australian pitcher plant needs shading 30-50%. When the temperature is 18-35℃, the shading is 50%, and the insect trap bag is larger, but the color is green.Increasingly light turns the bug bag purplish red.

In high humidity, the bug bag is larger, low humidity can also survive, but the bug bag. Smaller, the lid of the pouch seems to close during the hot and dry season. Usually Australian pitcher plant should be kept in a transparent cover or aquarium.

Australian pitcher plant doesn't sleep. If the plant suddenly Withers, check the root condition is still good, should immediately remove the withered old leaves, plant back to the original medium, keep the medium wet, about 2 months after the recovery of growth. If the situation does not improve, consider increasing sunlight or humidity. Leaves that grow in the spring do not form trap bags, but only in the summer season. 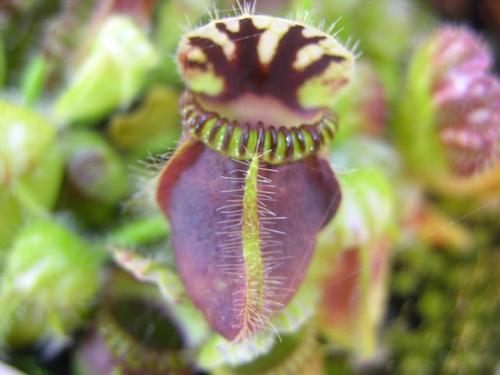 Australian pitcher plants can be used by seeding, dividing, and tissue culture.

Australian pitcher plant is one of the more unique species. The Australian pitcher plant has two forms of leaves at the same time: normal leaves and pitcher leaves (traps). Although the Australian pitcher plant works on the same principle: it lures prey into a pitcher, drowns it in digestive juice, decomposes it, and gets absorbed by glands inside the pitcher .But the way they set their traps is quite different. Bottle plants use honey secreted from their nectaries to attract prey, similar to the way people pay for bait in fishing. By contrast, the lovely Australian pitcher plant is much more advanced. It has long since abandoned the original means of luring prey with real objects and entered the information age, reaching a new level of "hunting for a white Wolf with nothing". Its pitcher cap the bar of the medial has 2 purple stripes, leads to the bottle, it looks flat structure is a mimicry creative behavior: general entomophily pollination tubiform floret had the same markings, which is a common evolution and some insects, the result of mutual selection, this information is expressed by the markings on insects have honeydew "inside," insect climbed into the Flower also pollinate plants finished eating.

The Australian Pitcher plant is native to wetlands in south-west Australia.Introduced worldwide as a cultivated ornamental plant.

Use of the Australian pitcher plant

Australian pitcher plant can effectively reduce the number of agricultural pests and improve crop yield, especially the production of horticultural crops. It does not pollute the natural environment, and the agricultural products are free from pesticide residues, thus improving the quality of products. The effective period of pest control is long, especially for the perennial insectivorous plants, the pest control is effective for many years, and has the multipotency of pest control, which saves the manpower and material resources of application. 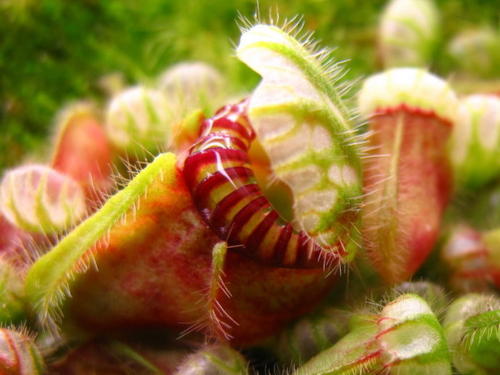