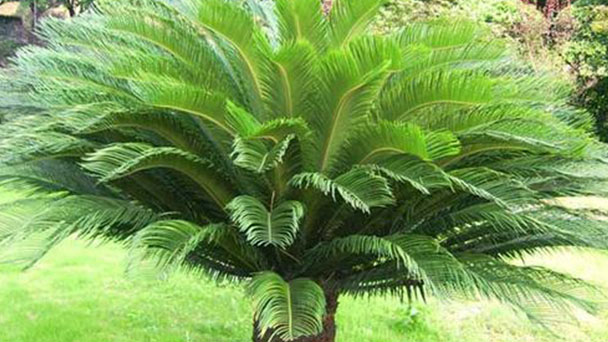 Sago Palm, Latin name Cycas revoluta Thunb. In fact, generally 15 to 20 years old trees can flower. If the cultivation is well, it can flower once a year, in the south, and when the growth environment is good, you can see flowers every year. 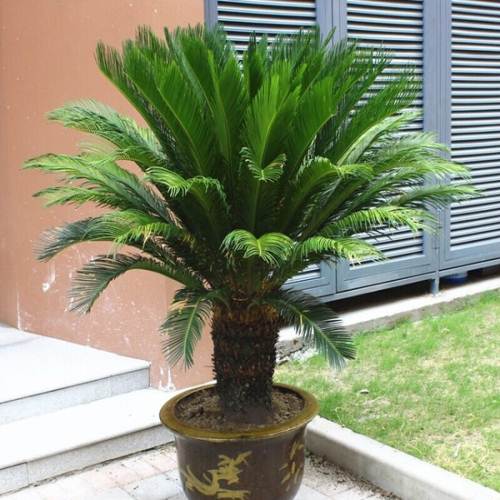 Sago Palm prefers warm and humid environments, does not tolerate cold, grows very slowly, and has a life of about 200 years. Trees more than 10 years old in the tropical and subtropical south of China bloom and bear Fruit almost every year, while Sago palm cultivated in the Yangtze River valley and other parts of the north often do not bloom all their lives, or occasionally bloom and bear fruit.

Sago Palm likes light, iron, slightly shade tolerant. When planting in an open field in the Shanghai area, warm measures such as straw wrapping should be taken in winter. Sago Palm prefers rich, moist and slightly acidic soils, but also tolerant to drought. Sago Palm grows slowly and blooms for more than 10 years.

There are 17 species of Sago Palm in the world, which are distributed in tropical and subtropical regions such as east Asia and southeast Asia, Oceania and Madagascar. China has 8 species, produced in Taiwan, Guangdong, Hainan, Fujian, Guangxi, Yunnan, Sichuan and other provinces.

In Fujian, Guangdong, Guangxi, Jiangxi, Yunnan, Guizhou and the eastern Part of Sichuan and other places are mostly planted in gardens, Jiangsu, Zhejiang and north China provinces and regions are mostly planted in pots. In winter, Sago Palm is placed in greenhouses for wintering. They are also found in southern Japan, the Philippines and Indonesia. Type specimens are collected from Japan. 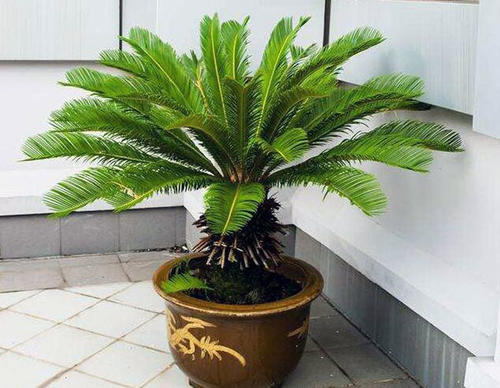 2. Trunk cutting propagation: Cut the trunk into about 10cm sections, bury them in sandy soil, cover the soil with 4-6cm soil, water them frequently and keep them wet, and then plant them after the cadres send out new buds.

3. Sowing propagation: The seeds should be collected at the end of autumn and sown as they are picked. The covering soil should be about 3cm deep, and germinate after about 2 weeks at 30 ~ 33℃ and high temperature. Seedlings grow slowly and take 2 to 4 years to transplant.
Read more about:
how to grow and care for Sago Palm
How to propagate Sago Palm

The main use of Sago Palm

Garden use: Sago Palm trees are graceful, vigorous and plain, with large and beautiful leaves and green tops all the year round, with unique ornamental effect. If arranged in the Garden and large venue, it can achieve a solemn and solemn effect. It is arranged in the center of the Flower bed, making people feel serene. As a foil for ancient buildings, it shows the vigor of the ancient. As the collocation of modern buildings, the four seasons are green and pleasant. Planting Sago Palm next to a temple is useful for warding off evil spirits.

Medicinal uses: The flowers, fruits and leaves of Sago Palm can be used as medicine, which can promote blood circulation, stop bleeding and reduce inflammation. The roots can also dispel wind and clear collaterals. 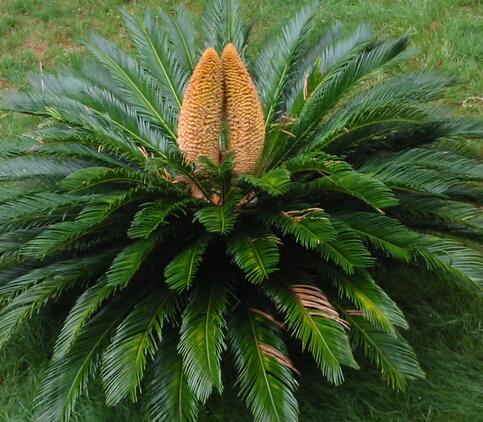 How to care for Sago palm

How to take care of Sago Palm