Prayer plant info: how to grow and care for prayer plant 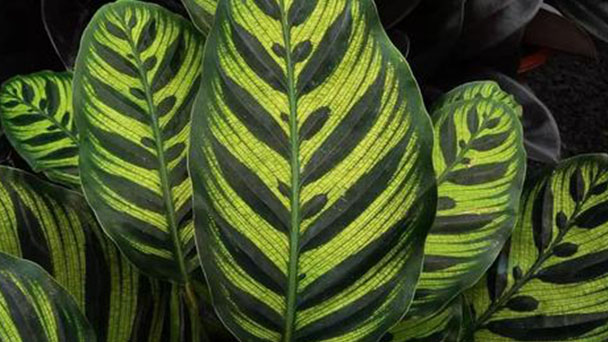 Prayer plant, scientific name Maranta leuconeura, is a perennial evergreen herb foliage plant of the Araceae family. Prayer plant height is up to 30 cm, much branched, broad and round leaves, bright light green on the front, grayish green on the back. Leaves are obovate, stalk base sheathlike. Racemes, flowers are in pairs, bracts few, sepals lanceolate; Corolla tube is cylindrical, base swollen, style thick.

Prayer plants are made in places like Brazil. Prayer plant loves a warm, humid and semi-shaded environment. Because this plant is resistant to shade, it is very suitable for the adornment beautification and afforestation inside the domestic bedroom. Prayer plant can be placed for a long time inside a brighter room, appreciate and admire, 4-6 weeks is placed inside the room with darker light, grow to its also without too big effect, can be put in a darker room for a long time, so also can grow well. 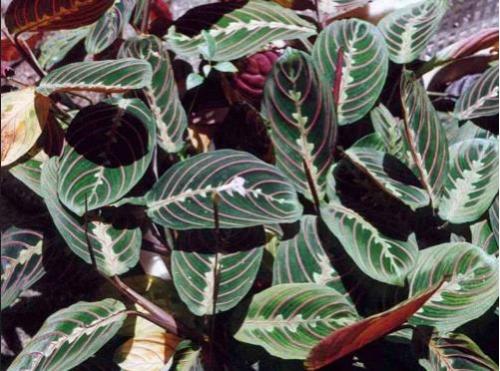 Prayer plant leaves are round in width, 8 cm to 15 cm in length, 7 cm to 10 cm in width, heart-shaped in base, pointed in front, light green and glossy in front, 6 to 8 pairs of lateral veins, two symmetrical pinnately arranged stripes between veins, grayish-brown at the beginning, dark green at the end, grayish-green at the back. Stalk base is sheathlike.

The ecological habits of prayer plant

Prayer plants like warm, humid and bright environment, not cold or drought resistant, afraid of scorching sun exposure, should be fully watered in the growing period, to keep wet, but soil should not water, it is better to use loose, fertile, good drainage and ventilation, and rich in humus of the slightly acidic soil.

How to grow and care for prayer plant

Avoid direct sunlight, prayer plant is better to grow below indirect radiation light or scattering sex light. Especially in summer, direct sunlight is easy to cause leaf burns, so the production is cultivated in the artificial controlled light environment with a shading net of 75%-80% refluence. If burn is found on the leaves, it should be immediately removed to a place without direct light or shading facilities or under the shade of trees, and the burned leaves should be cut off to avoid the invasion of other pathogenic bacteria from the wound. At the same time, strengthen the management of water and fertilizer, promote its re-leaf, restore a new appearance.

Spring - autumn each year is the peak season of prayer plant, the most suitable for the growth of air relative humidity from 75% to 85%, high air humidity is advantageous to the blade. Especially during the new leaf extraction, if too dry, the new leaf edge, leaf tip are easy to dry, becoming deformed in the future. Leaves cannot recover after wilting. Therefore, in the growing season prayer plant need to be frequently watered, and often spray to the foliage, 3-4 times a day in summer, and in time, the best watering method is spraying foliage in the morning, noon or afternoon pouring soil surface, the whole plant watering in the evening, but we should pay attention to the soil not too sticky, too wet, otherwise easy root rot and cause disease. After entering autumn and winter, the growth of prayer plant slows down, and the amount of watering should be gradually reduced. According to the weather change, watering 1 times a day or 2-3 days watering 1 times, especially when the temperature is low, the soil should be kept dry, so that it is free from cold damage.

Cultivation soil requires fertile, loose and good drainage, avoid soil compaction and water. Fertile humus soil and porous coarse media are often used as substrates. Generally with leaf rot soil and peat soil equal amounts of mixed configuration; Pond mud, peat and perlite can also be mixed in a ratio of 2:3:1. Or with loose foliar soil rich in organic matter plus 1/3 perlite, and then add a small amount of base fertilizer configuration.

According to the principle of "frequent and thin application", the compost of peanut bran and compound fertilizer or decompose compost should be applied once every 2 weeks during the growing season. The nutrient composition of fertilizer should be mainly nitrogen fertilizer, phosphorus and potash fertilizer. Because prayer plants are a foliage plant, the appropriate increase of nitrogen fertilizer can make the leaf color more beautiful. In addition, 0.1% solution can be prepared by urea with 46% nitrogen, and 0.2% solution can be prepared by adding potassium dihydrogen phosphate with more than 50% phosphorus and more than 30% potassium as root topdressing, which is better applied in the morning when the dew is not dry or at dusk. When spraying, fine hole sprayer should be used to spray both sides of the blade, spray 1 times a week, continuous spray 3 times, stop 1 time, and then continuous spray. Special attention should be paid to the concentration of fertilization should not be too large, otherwise it is easy to cause leaf burns resulting in fertilizer damage, and even cause plant death in serious cases. Stop fertilizing during the winter dormant period and when it gets too hot in summer. 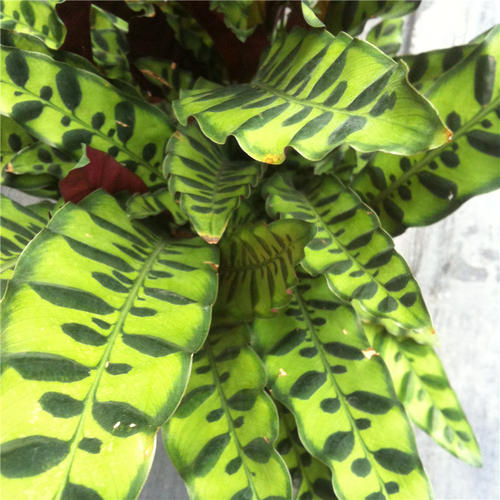 Cuttage propagation generally with top tender shoots, 10-15 cm long cuttings, depending on the size of the leaves, retain a third or half of the leaves, cuttings with 500ppm Naacetic acid treatment for 2-3 seconds, can also be used indole acetic acid, indole butyric acid and ABT root powder treatment. The cuttings were inserted into the seedbed after treatment, and the spacing between the plants and rows was 5×10 cm. The top is covered with a thin film canopy, and the management method is the same as that of ramet propagation. Cuttage propagation can be carried out at any time when the temperature is not lower than 20℃. Root 30-50 days for cuttings; However, the survival rate of cuttings was not as high as that of division propagation.It's usually around 50%.

There are many varieties of prayer plants, but the most popular by far is the tricolor variation available at many Garden centers. Prayer plants and calathea plants are so closely associated with one another that it's not uncommon for them to be mislabeled. Within the Maranta genus, a few species are the most common:

M. leuconeura massangeana: This variety has a darker leaf background with silvery blotches along the midrib and white leaf veins.

The disease occurs more frequently. Occurs, the stem or leaf base close to the soil becomes brown rot, grow white silk mycelium, radiate, can spread in the rhizosphere soil, and then cause the ground part of the wither and death; The initial stage is white, the later stage becomes yellow, and the final appearance is brown or brown like rapeseed, and then causes the ground part to wither and die. The disease was more serious in summer, and the pathogen was small sclerotinia. In the soil is too wet, infertile lack of fertilizer easy to come on.

Prevention and control methods: 70% pentachloronitrobenzene of 0.2% soil weight can be added to the soil to disinfect the soil; Before the formation of sclerotia, the diseased prayer plant was removed, the surrounding diseased soil was excavated, and new soil was added. Attention should be paid to ventilation during cultivation to prevent over-dense planting.

The disease mainly harms the leaf of the prayer plant, but also the leaf sheath. At the beginning of the disease, the spots appear to be less than 1 mm in diameter, and then change to a reddish-brown spot about 2 mm in diameter without any halo around the spots. The disease can occur throughout the year, with two peaks in autumn and spring of the following year.At the peak of the disease, a large number of leaves can be dried up, and the planting areas with poor management, poor ventilation, over-dense cultivation, stagnant water, poor soil, insufficient shade and poor plant growth potential can cause serious harm. The disease and residual body are the source of the initial infection of the disease.

Scale insects are mainly mealybugs, which occur at the edge of leaves or on the back of leaves, and sometimes on the surface. They suck plant juice with the piercing suction mouthpiece, light leaf becomes yellow and aging, affects plant growth, serious withered leaves, fallen leaves, until the death of the whole plant; At the same time, the wound infected by scale insects is easily infected with the virus. Scale insects have strong reproductive capacity and can reproduce for many generations in one year. The incubation period is in May. Adult scale insects have a waxy shell, general pesticides are difficult to enter, once they occur, it is difficult to control.When the indoor cultivation is not well ventilated, it is susceptible to the harm of scale insects.

Red spider harms plants more commonly, its small body, reddish-brown to orange, with sharp mouth needles to absorb the nutrients in the leaves, and cause the plant water and other metabolic balance imbalance, affecting the normal growth and development of plants. Red spider and so on in the high temperature and dry environment, insect reproduction quickly, serious harm.

Prevention and control method: keep the environment ventilated, make the environment humidity maintain above 40%, leaf back often spray water can control red spider reproduction. Because pesticides are difficult to kill the eggs, it is generally carried out in the adult and nymphal stage after the eggs hatch. It can be sprayed with 20% dichromatol emulsion 1000 times liquid or 40% diethoate emulsion 1000 times liquid.

The distribution area of prayer plant

Prayer plants are native to the tropical regions of America, Africa and Asia.

Prayer plant  has an underground rhizome or tuber, leaves solitary, and large. In addition to the open leaf sheath at the base of the leaf and petiole, there is a significantly enlarged joint, called "leaf pillow", which has water storage cells, regulating the direction of the leaf, that is, when the water is sufficient at night, the leaf is upright, and when the water is insufficient during the day, the leaf is expanded, which is a characteristic of araceae plants.In addition, some arrowroot also 'sleep movement', that is, the leaf spread out during the day, the night folded, very peculiar. (Find more best indoor hanging plants here.)

The leaves of Prayer plant are rich and colorful, highly ornamental, and most of them are shade plants with strong negative tolerance and strong adaptability. Prayer plant can be planted in the shade of courtyards and parks or by the roadside. In South China, more and more species have been used in landscaping. Planting methods can be used in patches, clumps or with other plants.In northern areas, can be cultivated in the ornamental greenhouse for landscape ornamental.

Prayer plant is stronger because bear negative, leaf color is beautiful, can be planted directly in the corner lot of the public place such as guesthouse, shopping mall, large assembly hall to make permanent arrangements. However, in the process of cultivation and management, it is necessary to properly supplement the light and regularly spray water to the foliage to improve the air humidity.

Because the Prayer plant type is beautiful, the leaf color is multicoloured, and has a strong negative tolerance, cultivation management is simple, used for indoor potted ornamental, Prayer plant is one of the most famous indoor leaf viewing plants in the world. Large breed can be used to decorate the hall of guesthouse, market, small breed can adorn the balcony of the bedroom, sitting room, bedroom, etc. In the process of cultivation and management, each placed for a period of time, should be placed in the balcony, window sill where the sun is strong, enhance the light, for long-term appreciation. Prayer plant is a high-grade leaf cutting material and can be directly used as Flower arrangement or as lining material for flower arrangement. 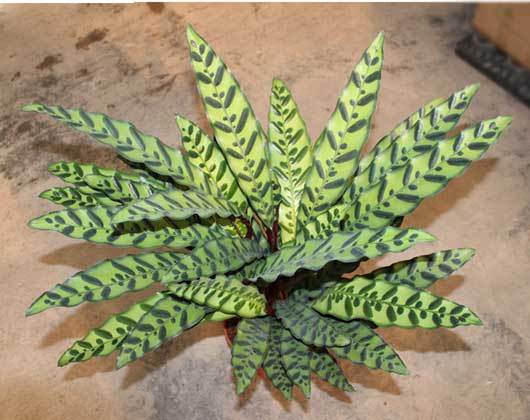