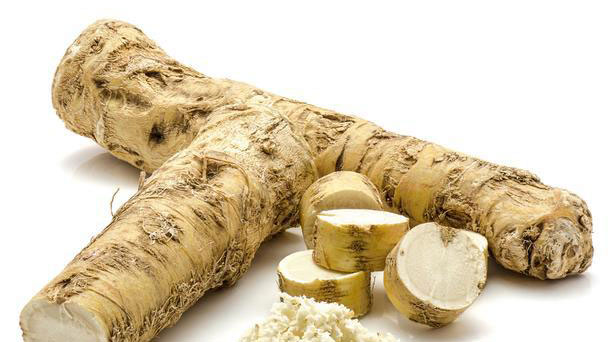 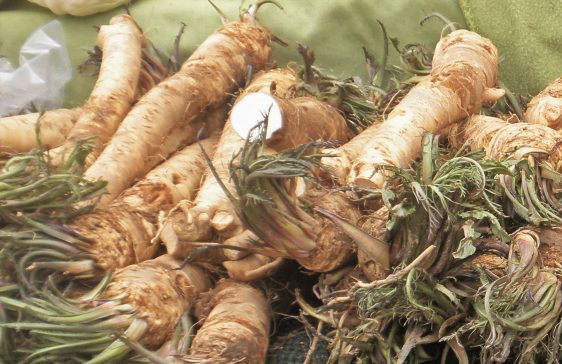 The aromatic roots of the horseradish plant have been prized for their medicinal and culinary properties for 3,000 years. According to Greek mythology, the Delphic Oracle described horseradish to Apollo, the God of medicine, as "worth its weight in gold." From ancient Egypt to mysterious Pompeii, early civilizations depicted horseradish in their art and writings. Used for thousands of years, horseradish is also counted amongst the five bitter Herbs used in the Jewish celebration of the Passover Seder.
During the Middle Ages, both the leaves and roots were used as medicinal remedies. Horseradish's culinary value as a condiment on meats began taking shape in Germany, Scandinavia, and finally, Britain. It crossed the Atlantic Ocean to North America during colonial times. 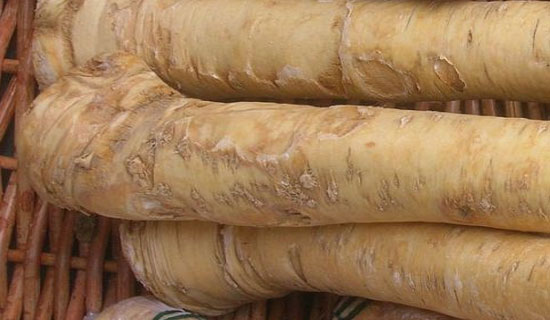 How to Grow and Care for Horseradish Plant

How to Grow Horseradish Plant

Wipe the blade dry with a paper towel. Create root cuttings by slicing the slender side roots into 6- to 8-inch-long portions, each with a diameter of approximately a 1/4 inch. Wipe the blade of the Gardening knife after each cut to prevent infection. Dig a planting hole for each roo cutting. Make the holes deep enough to accommodate the horseradish root. Space the holes 2 feet apart in rows that are 30 inches apart. Insert the horseradish root into the planting hole. Backfill around it with the amended soil until the root is completely covered and, in the case of crown cuttings, the base of the stems is even with the surrounding soil. Water each horseradish cutting to a 4-inch depth after transplant. Spread a 3-inch-thick layer of mulch between the cuttings. Leave a 1-inch space between the mulch and the horseradish plants to allow for moisture evaporation. Crown cuttings are simpler than root cuttings. For crown cuttings, cut the plant into equal sections. All portions should have a fair share of both foliage and roots. Plant the Crown cuttings upside down at an angle, with the top of the cutting about 2 inches below the ground. Spacing should be 2 to 2.5 feet apart in all directions. Put some water in the hole with the cutting before covering it over. Once your cuttings are covered water them again thoroughly, be sure the water saturates the ground to a depth of about 3 or 4 inches.  Once watered place a healthy layer of organic mulch such as bark, wood chips, straw in the space between the plantings but leave a separation of an inch or two between the mulch and where the cuttings are planted.

How to Care for Horseradish Plant

In general, horseradish is a forgiving plant that can handle a wide range of sun exposure. Ideally, however, horseradish thrives in full sun or part shade. Horseradish likes a slightly acidic to neutral soil pH of about 6.0 to 7.5. A loose soil rich in organic matter will produce the best roots. Horseradish is not a demanding plant, but you will get better-quality roots if you keep the soil well-watered, so the roots do not get woody. It prefers a temperature between 45-75 degrees Fahrenheit. Horseradish is cold-hardy, but it’s extremely sensitive to excessive heat. Keep an eye on the temperature. It shouldn’t exceed 75 degrees Fahrenheit. If it does, provide some shade by hanging shade cloth over the plants, or move them to a cooler location. Fertilize in the spring, using a low-nitrogen and high-phosphorus fertilizer for larger, healthier roots. If you’ve amended the soil heavily with compost, you may be able to skip fertilizer entirely. Pruning horseradish is mostly unnecessary. It's mainly done to keep the suckers from inhibiting the growth of the main shoots. Remove the sucker leaves when they're 6-8 inches long. These leaves grow outside of the plant’s crown.Make sure to trim those only and leave the tight bunch of leaves that's growing right from the crown's center. That's where you want growth to continue. 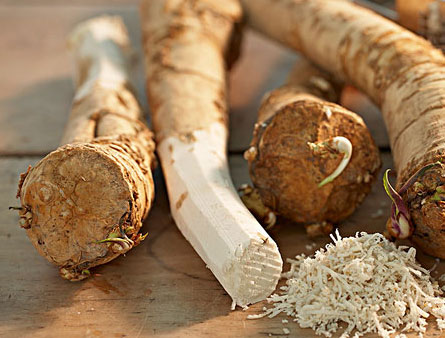 For best flavor, horseradish should be harvested in cooler months, as cool soil helps to produce its pungent taste. The optimal time to harvest horseradish for most regions is in late fall through early spring. This also gives you a large window in which to harvest your horseradish, so you don't have to harvest a lot at one time and chance it spoiling.
You'll know your horseradish is ready when its root is about 1-inch in diameter. You can check one of your roots by gently digging it from the ground. Replant it if it needs some time to grow. Horseradish typically takes a full year after planting to become established enough for harvesting. However, once it's established, you should continue to have excellent growth each year.
To harvest horseradish, use a digging fork to loosen the soil in a circle around the plant. Then, use your fingers to determine the angle of the root, so you can more easily follow its path to dig around it. Use your fork to help you gently pull up on the root from underneath.
Wash off each root and let them dry completely. You can then store them in the refrigerator in a perforated bag, preferably in the vegetable crisper section, for about 3 months.

Horseradish contains several essential nutrients, including potassium, calcium, magnesium, and phosphorus. In its raw state, horseradish boasts approximately 79.31 milligrams of vitamin C per 100 grams. Mustard oil is also present, which gives horseradish its antibacterial properties. Roots have been used to treat many conditions, including urinary tract infections, coughs and bronchitis, congestion, and even hangnails and ingrown toenails. Additionally, compounds present in the roots have been shown to kill some bacterial strains.
Additionally, anyone who has ever breathed or swallowed horseradish without knowing what it was in advance can attest to its sinus-clearing capacity. A spoonful of grated horseradish mixed with honey is a common recommendation for naturally clearing nasal congestion in a flash. Eating horseradish regularly reportedly boosts immunity to coughs, colds, and flu. 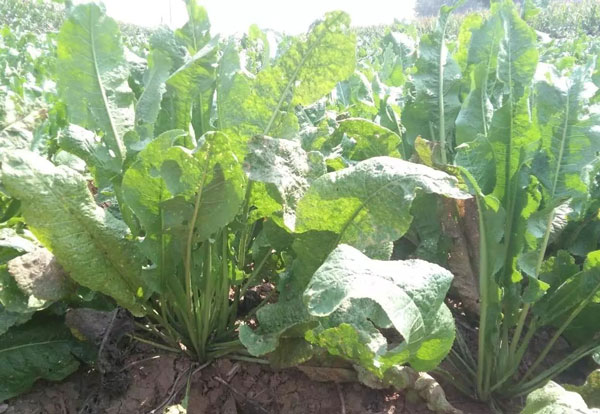 Common horseradish may be the only variety you will find. There is also Armoracia rusticana 'Variegata', which is more ornamental, with marbled leaves.

The most common problem with horseradish is how to keep it from growing where you don't want it. It can become aggressive if not kept under control. To control the spread, remove the entire root, even the branches, when harvesting. Replant only the number of roots you want for the following season. Whatever you do, don't till up soil containing horseradish roots because you will risk spreading the plant all over the garden. Almost every little piece of root will sprout where it lies.
Horseradish flea beetle is a serious pest on foliage. It deposits egg clusters on leaf petioles (leafstalk). Its larvae burrow into the petioles and will kill some of the leaves. A floating row cover will help. Horticulture oils also have some repellent effect on this insect. Remember to read and follow the directions on all insecticides.

Horseradish is thought to repel aphids and whiteflies, blister beetles, Potato beetles, and some varieties of caterpillar. Its flowers attract beneficial predatory hoverflies.

How to Grow & Care for Horseradish Plant