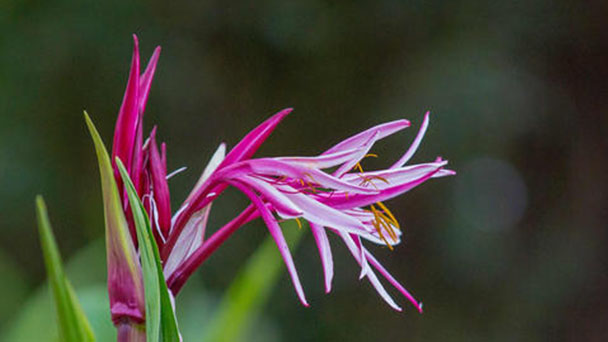 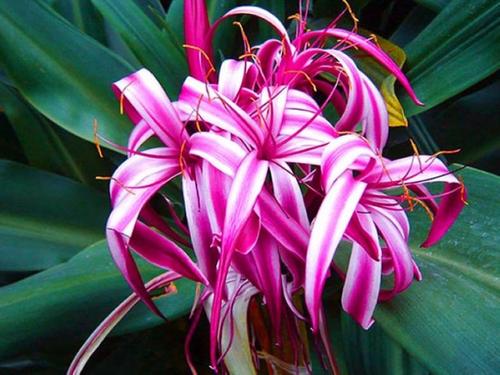 Giant spider lily is a perennial evergreen herb with a plant height of 60 ~ 100 cm. Its leaves are large and broad-band in shape. The whole leaf is green in color.

Giant spider lily is fond of warm, humid and well-light environments, and abstains from hot sun exposure. Its growth temperature is 15 ~ 20℃, and it requires loose, fertile, sandy soil with high humus content.

How to grow and care for giant spider lily

The culture soil requires the acid soil rich in humus, and the root system often rotts in the soil with heavy clay. The culture soil mixed with 3 parts of peat soil and 2 parts of sand soil can be used for planting.

The growing period of giant spider lily needs sufficient water, especially before and after flowering and flowering period is more important, the pot soil should be watered in time after dry, otherwise the leaves are easy to fall over and affect the growth, to make the pot soil between dry wet, can not make the pot water. Winter to control watering, but at ordinary times must often in the plant foliar spray, in order to maintain a higher air humidity.

Giant spider lily has relative shade resistance, high temperature in summer should be moved to the outdoor canopy for conservation, the best growth in an astigmatism environment, in the middle of September moved to the indoor sunny place.

Top fertilizer should be applied frequently throughout the Giant spider lily growing season from spring to winter. Generally every 10 ~ 15 days to pour a ripe light liquid fertilizer or the preparation of nutrient solution.Top dressing should be carried out when the basin soil is dry, improper fertilization will make fleshy root rot.

When new leaves grow every year, we need to take off the outermost old leaves of Giant spider lily, and should cut yellow leaves at any time. After the Flower to cut the pedicel in time, in order to maintain the plant shape beautifully. 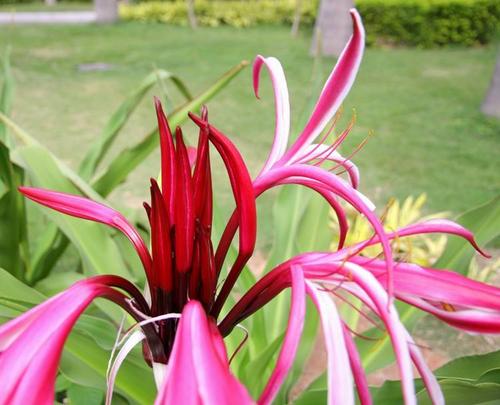 The propagation of giant spider lily

Giant spider lily prefers warm and humid environments and is relatively tolerant to shade. The suitable growth temperature is 15℃ to 25℃, suitable for loose, fertile sandy loam growth. We can choose 3 parts of peat soil and 2 parts of sand soil mixed culture soil planting. Giant Spider Lily needs to replace a slightly larger basin and add basal fertilizer to the basin soil every spring. In the initial stage, the seedling pot should be placed in the shade of flowers for 5 BBB 0 7 days, and then moved to the scattered light environment for planting. During the growing period of pot seedlings, thin organic liquid fertilizer (20% concentration) should be applied once every two weeks. The soil in the pot should be kept moist, but no water should be collected.

Split propagation was mainly carried out in spring and autumn. Cultivation pot soil can choose peat soil and river sand in the ratio of 2∶1 mixed soil. The whole growth process of water fertilizer are large, keep the pot soil moist, can not be short of water, every 2 weeks pouring 1 times compound fertilizer, 2 ~ 3 times before the flower phosphate potassium fertilizer, after the flower timely cut off the scape.In summer, pay attention to shade, and keep the ambient temperature does not exceed 25℃. Reduce watering in winter, stop fertilization, and maintain the greenhouse temperature is not lower than 10℃.

In summer, Giant spider lily is afraid of high temperatures, so it should be moved to the outdoor awning for maintenance. In the middle of September, it should be moved to the indoor sunny place. In the environment of high temperature and poor ventilation, soot disease and red spider are easy to occur. Disease can be sprayed with carbendazim (concentration of 0.2%), insect pests can be sprayed with diethoate emulsion to kill.

During the growth period, Giant spider lily is vulnerable to the damage of blown cotton scales and is accompanied by the occurrence of sooty disease. In a small amount, water can be used to wash; in a large amount, a mixture of 40% diethoate emulsion and 80% dichlorvos emulsion 1000 times can be sprayed for control and the sooty disease pollution can be washed with water.

The distribution region of the giant spider lily

The Giant spider lily is native to Indonesia.

Landscape use of the giant spider lily

The ancients the plum, orchid, bamboo, chrysanthemum, as "four gentlemen", Giant spiders lily as ornamental value is very high, it's dark purple flowers with elegant, although the growth of branches is not neat, but on the whole has a beauty of irregular, usually in the spring and autumn season of plant breeding, keep the soil moist, Giant spiders lily will naturally grow very beautiful, and the Garden beauty to outshine each other. 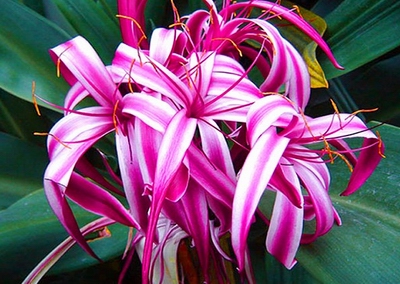