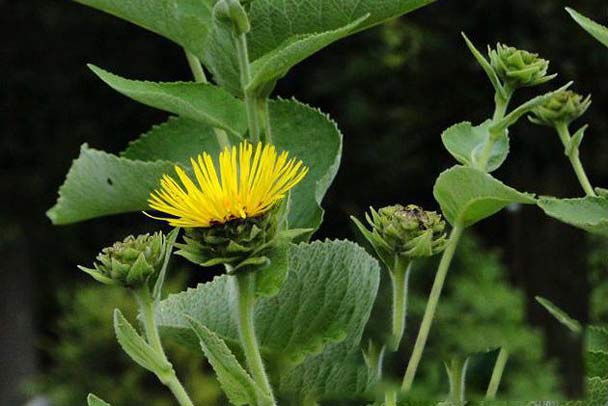 In Celtic folklore it is a favorite plant of the Elves, although Elecampane (Inula helenium) is used to protect against Elvin magic. Elecampane (Inula helenium) is also used to attract fairies, despite being a big, rough plant and not at all delicate, as one would expect from a fairy plant. In Germany, Elecampane (Inula helenium) was traditional to put an elfwort blossom in the middle of a bouquet to symbolize the Sun and the head of Odin, and the flower has the typical Sun shape (and the freshly harvested seeds smell like frankincense).  Elecampane was used by the Druids and still used by Neopagans in the form of incense in rituals for initiation and baby blessings. The root of Elecampane was once chewed by travelers when passing close to a polluted river as protection from whatever noxious substance was causing the stench. 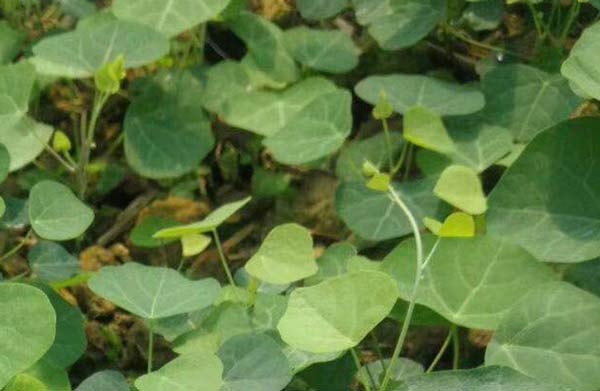 Elecampane (Inula helenium) looks so exotic in Finland that one immediately suspects that it must be native to another land. During the Age of Utility in Sweden-Finland at the end of the 18th century, there began a search for new useful plants from beyond our borders. Elecampane was one of these finds, and it spread to southern and western Finland in particular. The eastern parts of Finnish Kymijoki belonged at that time to Russia, and the drive to educate the population didn't extend beyond the border. This can still be seen in the way that elecampane and many other old useful plants have spread: Elecampane are mainly on the western side of Kymijoki. Elecampane does not grow any further north than central Finland. It is easiest to find in and around old mansion and vicarage gardens. Elecampane is a vigorous plant that thrives and is able to spread even when it's left to its own devices. 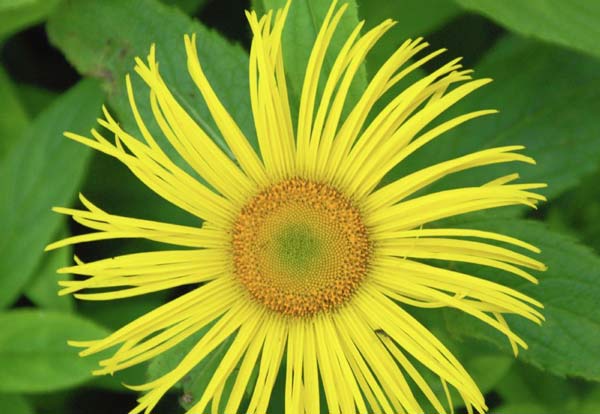 How to Grow and Care for Elecampane (Inula helenium)

How to Grow Elecampane (Inula helenium)

Start seeds indoors in flats 6 to 8 weeks before the date of the last frost.
The only concern about growing elecampane plants is that they do need some room. Plan on giving your plants two to three feet of space around each one to accommodate the leaves and roots in a garden setting.
Although some herbs can be challenging to start from seed, elecampane is very easy. It's a light-dependent germinator, so be careful not to bury it deeply. Sprinkle the Elecampane seeds where you want it to grow, then pat them down lightly with a bit of soil strewn over the top to hold them in place. Germination usually happens within two weeks.
Elecampane transplants well, so you can also start seeds in soil blocks or pots. I usually start my elecampane in soil blocks in the spring or summer. Tamp the seeds down on top of the blocks and keep them moist until germination. Once the seedlings are well established, I transplant the blocks out into the garden.
After a year or two in the garden, your elecampane will be ready to harvest.
Elecampane (Inula helenium) will often form only vegetative growth the first year but will flower prolifically the next year. Plants in some climates will spread each year and require division approximately every third year. In perfect conditions they can also self seed. Propagate elecampane with cuttings in the fall, after harvesting the root.
Select a healthy piece of root that is about 2 inches long and contains a bud or eye.
Plant each cutting about 12 inches deep, spacing them at least 12 inches apart.
Water the area until the ground freezes. In spring, water carefully to keep the soil moist.
The resulting plant should be mature in two years.

How to Care for Elecampane (Inula helenium)

Elecampane grows best in part shade but will tolerate full sun. For Elecampane (Inula helenium), all soil types are tolerated but damp clay loam with acidic to neutral soil is ideal. Slightly moist soils, with good drainage, will result in better performance as this replicates the native habitat. Water as needed to keep the soil moist but not wet. As a wildflower, elecampane does not require a precise watering schedule, but proper, deep watering will help produce healthy roots for harvesting. Elecampane (Inula helenium) grows in a variety of climate types and temperatures, but it grows best in areas with mild summers and cold winters. Elecampane (Inula helenium) does not grow well in very hot and humid areas. There is no need to feed elecampane flowers with commercial fertilizers or flower food, and organic feeding is best if you plan to harvest the roots for medicinal uses. Simply top-dress the soil with compost in spring. Prune back Elecampane in early spring to remove the dead stems from winter. 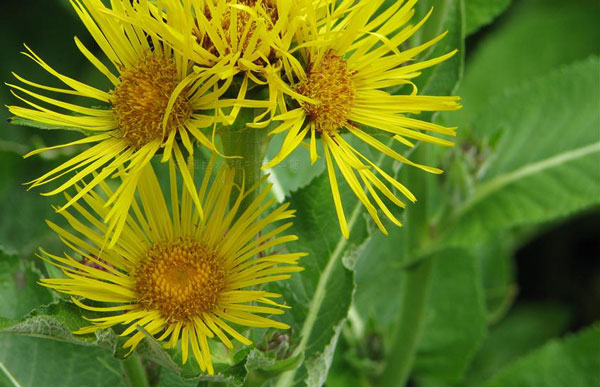 Elecampane was already an important medicinal plant to the ancient Romans and Greeks. Rhizomes and roots that were collected in the autumn were used to treat intestinal worms, lung and air passage diseases and disorders, catarrh, to improve digestion, and as an antiseptic in the treatment of wounds. The plant’s thick rhizome contains high levels of inulin, just like Spanish salsify (Scorzonera hispanica), another member of the Daisy family. Elecampane is cultivated for its roots, which are used in the kitchen as a cooking ingredient and to flavour schnapps. The active ingredients in the root can cause nausea however if they are consumed in high doses. In the Balkans and central Europe it is still cultivated to some extent for the same reasons as it was in the Middle Ages.
Elecampane was used as a flavoring for desserts, fish sauces, candies, and liqueurs such as absinthe and  vermouth.  The root was candied and up until about 1920 was a common flavoring in English sweets.
Boiling dry roots in water on top of stove will freshen sickrooms as well as stale winter air.  An infusion or decoction added to laundry rinse water will freshen linens.
When harvesting, the root is taken in the fall after the stem has died back (usually after 2 hard frosts), then chopped into small pieces and dried slowly, but completely, with low heat. Elecampane flowers are harvested when fully open, then dried whole for use in decoctions, infusions, and powders. 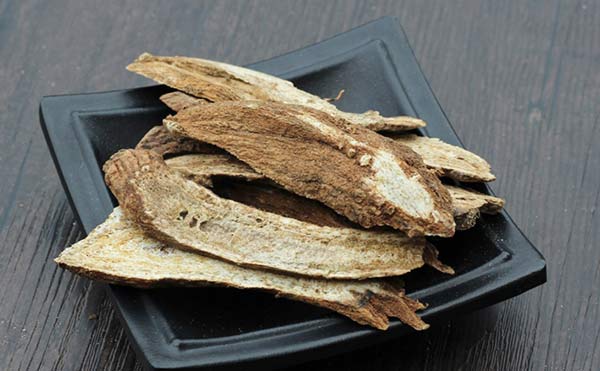 There are around 100 species in the Inula genus. A vintage herb, Inula helenium is an ingredient in absinthe, vermouth and some perfumes. Most types of Inula plant have herbal qualities and have been part of treatments for digestive ailments, respiratory illness and to enhance the immune system. The Chinese had information about Inula plants that showed them useful in Eastern medicine as well as the source for xuan fu hua, an important scent. Inula helenium and I. magnifica found growing wild in the United States have naturalized when they escaped from cultivation. The majority of the genus is native to central Asia. Inula verbasscifolia is native to the Balkans and Italy and has foliage like lamb’s ears, with fuzzy white hairs. 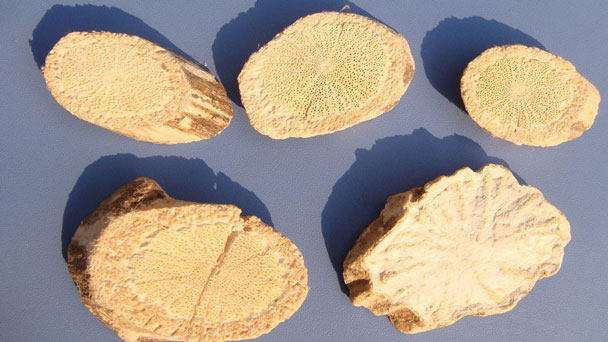 Position Elecampane in the middle or back of a flower bed, keeping in mind their mature height of 3 to 4 feet. Good companions for Elecampane include purple asters, monarda, agastache, goldenrod, echinacea, rudbeckia, Joe Pye weed, Russian sage, dahlias and ornamental grasses.