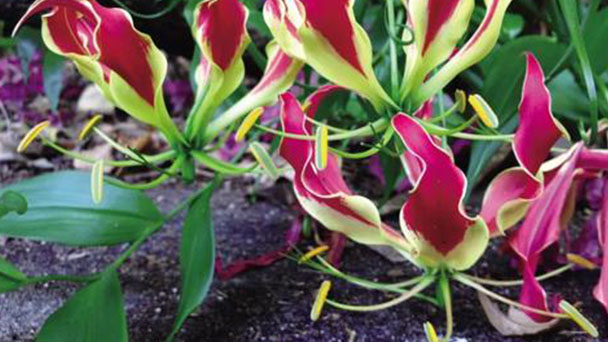 Climbing lily (scientific name: Gloriosa superba L.), also called Gloriosa lily, glory lily, fire lily, flame lily, climbing lily, creeping lily, cat's claw, tiger's claw, is a Climbing plant in the family Liliaceae in the order Lilium and is the national flower of Zimbabwe. The flower's name comes from the Latin word for "marvel" or "beauty." In China, only in the warm south can be planted on the ground, the north is more potted, used to decorate the courtyard, balcony, bedroom and other places, and can also make flowers corset or other flowers make bouquets.South Yunnan, Hainan, China, tropical Asia and Africa. There are scattered wild species in Xishuangbanna, Yunnan, China, below the altitude of 1200m.

Climbing lily (Gloriosa lily) is the national Flower of Zimbabwe. It has a spectacular and varied flower pattern similar to a burning flame. climbing lily (Gloriosa lily) is also known as the Climosa lily.Because of its cold resistance sex is poor, in our country only warm southern ability is planted on the ground, the north makes potted plant more, use at decorate the place such as courtyard, balcony, bedroom, also can make corset of flower or make it of other flowers in tie-in flower bouquet.

Leaves of Climbing lily (Gloriosa lily) are alternate, opposite, or whorled on the stem, and the apex is often extended into tendrils.

How to grow and care for climbing lily (Gloriosa lily)

Climbing lily (Gloriosa lily) likes warm, wet and sunny environments in dense forest and wet grass, and has poor cold resistance. Its growth temperature is 22-24 ℃. When the temperature is lower than 22℃, the flowering is not good and can not set fruit when the temperature is lower than 15℃. The aboveground part was damaged by freezing, but the growth was inhibited when the temperature was higher than 32℃. South China can be cultivated in open fields. Central China to North China can only be moved into the indoor potted winter, room temperature had better not be less than 18℃. Cultivation substrate: it is required to be cultivated in sandy loam rich in humus, loose and fertile, with good drainage and strong water retention. Climosa lily (Gloriosa lily) is not resistant to moisture or drought.

Climbing lily (Gloriosa lily) is pleasant to weak light, but summer is not resistant to strong light after direct transplanting should build shade shed, cover 50% one 60% illumination. It can be displayed and appreciated for a long time in the indoor environment with better illumination. In planting Climbing lily (Gloriosa lily), scaffolds should be established in time to avoid breakage of stems and tenders.

Climbing lily (Gloriosa lily) requires sufficient water during growth and reduced watering as it enters the winter dormant phase. The soil should not be too wet or it will cause root rot. If necessary, the tubers should be dug up during the dormant period. Storage in sand or wood chips.

Generally in late April, the rhizomes of Climbing lily (Gloriosa lily) should be planted flat in soil about 3cm thick.For potting, plant two rhizomes in a 30cm pot. The soil is kept cool to prevent rot in the rhizomes. From the middle of May to the early ten days of June, sprouts began to sprout. After the buds were unearthed, they grew rapidly. It was necessary to add pillars to make them climb upward in time so as not to break branches. When the branches and tendrils are 20cm high, support should be set up, binding, and often spray. From July onwards, Climbing lily (Gloriosa lily) blooms gradually from the bottom to the top, until October to November, when the temperature drops, it stops blooming. Artificial pollination can be adopted during the flowering period in order to make the fruit seeds full. During the growth of the need to maintain a certain humidity, about every half a month fertilization, fertilizer to nitrogen, phosphorus, potassium mixture of the best. Add 1 or 2 times of phosphorus and potassium fertilizer in the summer and autumn flowering period. In late October to November, the aboveground gradually withered and yellow, above 5℃ can successfully overwintering, the southern winter warm areas, underground rhizome can be directly in the original plant ground or pot overwintering, overwintering without watering;Winter frost areas should be dug up, buried in dry peat moss or sand overwintering.

When making indoor potted, to lengthen growing period and flowering period, can be in advance inside the greenhouse push bud. For cut flower production, cut when the first flower has unfolded, is fully colored and at least two buds have developed. Flowers of Climbing lily (Gloriosa lily) should be sold in small bags and generally keep fresh for about 10 days. Climbing lily (Gloriosa lily) was susceptible to leaf spot and bacterial blight in high temperature and rainy season, and 400 times of diazepine solution could be used.In the rain season can apply plant ash or spray 20 times garlic leaching solution control; Once a week, choose a time when it is not raining, to spray 700 times methyl topzine solution and albuminol. The main pests are nematodes, which can be irrigated with 90% trichlorfon solution 1500 times.

Climosa lily (Gloriosa lily) can be propagated by dividing and sowing.

Before the seedling sprouts in the spring, usually in the repot, the rhizome will be removed and planted, and each tuber must have eyes, the Climbing lily (Gloriosa lily) can flower in the same year. The mature period of the fruit is long, and the fruit of the late stage cannot mature until the winter seedling is withered. Therefore, the first flower to open should be reserved for seed use. Seed spring sowing or autumn sowing, will be more dense in the seedling after the young move out of another plant, to the next spring and then plant, the 2nd, 3 years can blossom. Commercial production of seedlings of Climbing lily (Gloriosa lily) can also be realized by tissue culture technique.

When flying above 5℃ in the spring, the vine branches will be cut off, every 2 to 3 sections cut into a section for cuttings inserted in the sand bed, another section to stay above the sand inserted after paying attention to moisture and shade after 1 month or so can be roots, germination, 1 and a half months or so can be moved to the planting nursery or pot planting.

Climbing lily (Gloriosa lily) division takes place in early spring. Dishing out the maternal side of a small rhizomes cut planting can be cutting tubers, distribution can be relatively thick rhizomes pull up to remove tendrils, separate the two forks of each root, or to cut the stems into 12 cm long, each new tuber cutting must have the body-to keep shallow buried in the sand about 20 days to form a new root and planted 20 a 30 days later can be out of the bed cultivation. It is a common method in production because it has a high survival rate and can blossom in the same year.

Seeds of Climbing lily (Gloriosa lily) can be sown after harvest in autumn or in February or March of the following year, but the germination rate of seeds is low.In the frost free area can be planted on the open ground, the formation of small tubers in October, that is to enter the dormant state.In winter, tubers should be dug out and placed indoors for the winter.Seedling cultivation after 2 to 3 years of cultivation before flowering. 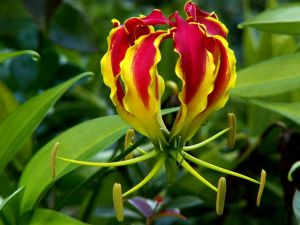 The diseases of Climbing lily (Gloriosa lily) mainly include leaf spot and rhizoma blight, which are caused by high temperature and humidity and water accumulation in soil. These diseases can be prevented by improving the cultivation environment, spraying with antibiotics such as diesenzine, chlorothalonil and methyl tobutin, and increasing application of plant ash in the rainy season.

The insect pest has nematodes to harm the rhizome, can use the pesticide that kills underground pests to carry on the control.

The leaves are oval, red or yellow, and the edges of the petals are not wrinkled. Of tropical Africa.

The tubers of Climbing lily (Gloriosa lily) are rich in colchicine, which has been used medically to treat diseases such as cancer, acute gout and bronchitis.

The flower pattern of Climbing lily (Gloriosa lily) is unique, like a burning flame, beautiful and elegant; Variety of designs and colors;It is a beautiful vertical greening material, which can be widely used in indoor and outdoor courtyard greening and beautification.

Flower type Climbing lily (Gloriosa lily) is unique, elegant posture, gorgeous flowers and color like palace lantern hanging, high ornamental value. At the same time, the flowering period is longer, each flower can open for 10 days or so, and the flowering period of each plant can reach 60 to 60 days. The vase life of its cut flowers is also longer, up to 7 to 10 days. Therefore, Climbing lily (Gloriosa lily) is a good material for potted plants and fresh cut flowers. It can be planted in balconies, scaffolds, pavilions, flower corridors, etc. In the north can also be used for indoor potted ornamental or stand tied into a potted flower ornamental. In addition, its rhizome can be used for medicine, but its plant body is poisonous, people, livestock can not be eaten by mistake.

Currently, in Europe and the United States, high grade cut flowers and potted flowers, high grade Climbing lily (Gloriosa lily) have been commercially produced, and fresh cut flowers have been introduced into China. As a high-grade potted flower, Gloriosa lily has high ornamental value and market development prospect due to its long flowering period and beautiful flowers and leaves. The tubers of Climbing lily (Gloriosa lily) are rich in colchicine, which has been used medically to treat diseases such as cancer, acute gout and bronchitis.

Climosa lily (Gloriosa lily) has a unique flower shape, such as a burning flame. It is gorgeous and elegant with varied flower color and long flowering period. It is a beautiful vertical greening flower, which can be used in indoor and outdoor garden greening and beautification. Climbing lily (Gloriosa lily) can also be planted in the balcony, scaffolding, pavilion column, flower gallery and other places. 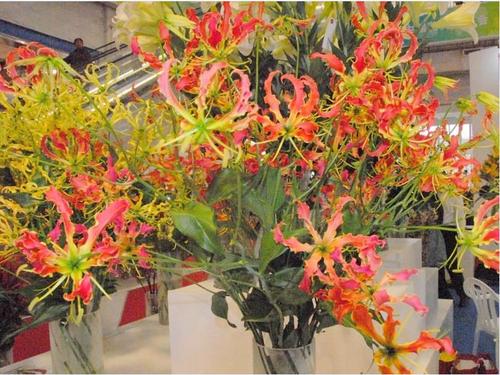 How to grow and care for climbing lily