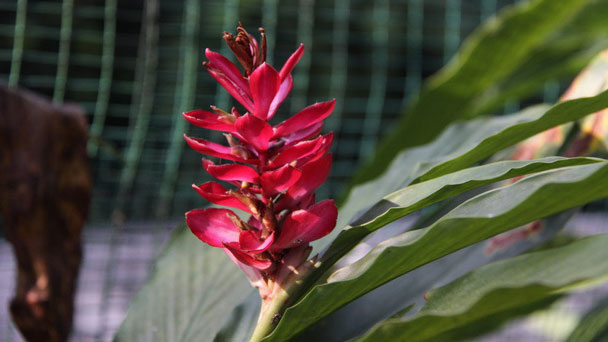 If you have very large pots, scarlet ginger Lily (Hedychium Coccineum) are great potted plants. Hedychiums grow so fast that they even fill the largest pots with thick rhizomes, and eventually all pots can split apart except the strongest pots. Due to their size and difficulty in maintaining turmeric in small pots, hardy ginger plants are rarely available in retail nurseries and garden centers. Potted specimens require a lot of water (daily or more frequently). Place Flower pots near the seating area to enjoy the bright colors and rich fragrance. 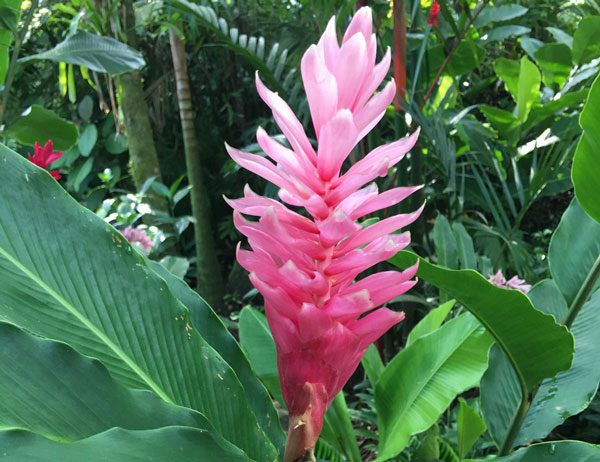 White ginger blossoms eventually yield bright red seeds. Store seeds for three to four weeks at a temperature between 70 and 75 degrees Fahrenheit, and then soak them in warm water for two hours to soften their hard coats. Plant them 1/2 inch deep in compost. Keep the compost moist, in light and at a constant temperature between 68 and 77 degrees F. The seeds should germinate in two to six weeks but may take longer.
Plant seeds outdoors in a sunny location in soil mixed with humus, cover lightly and water generously. Plant the seeds 1 1/2 to 3 feet apart. Plant indoors in a soil-based potting mix. Do not plant outdoors if there is any chance the temperature will drop below 40 degrees F.

Scarlet Ginger Lily is propagated from seeds and by dividing rhizomes. Division is done by gently digging up clumps from the root and dividing the tubers or rhizomes with a knife or spade.Take care to dig far enough away to avoid cutting the roots that grow from the sides. Wash away the soil with a garden hose and cut out anything that looks brown or rotten. Cut into 8-inch sections that have roots. Always make clean cuts; do not break the rhizome. Wearing rubber gloves, dissolve 1/4 cup of captan or other fungicide powder into 5 gallons of water. Drop your rhizome divisions into the solution and let them soak for at least 30 minutes and overnight if possible but not longer.
Make sure each section has a growing shoot and then plant in a permanent position or in containers.Plant the rhizome divisions 1 to 3 inches deep in a rich organic soil. Plant the divisions horizontally and with a stub poking above the surface. As much as possible plant them same way they were growing before you divided them. If you plant rhizome divisions in the spring or summer, they will grow faster. Do not plant them in soggy soil or they may develop fungal rot. 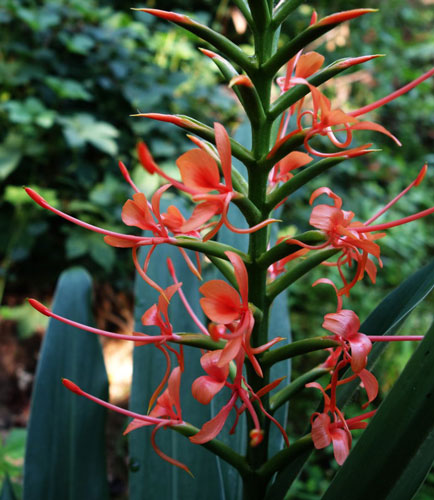 How to Care for Scarlet Ginger Lily (Hedychium Coccineum)

When growing the Scarlet Ginger Lily in a container, it’s best to avoid all types of soil and to plant it in a soil-less tropical mix or coco peat. That type of mix has the right texture and acidity levels that don’t cause any damage to the roots while providing the necessary nutrients. However, if you intend to grow it in the garden, then make sure the soil is loamy, rich, and well-drained. This perennial doesn't like to get its feet wet and waterlogged soil or any other medium is the number one cause for root rot. Aim for pH levels around neutral or slightly acidic. Avoid alkaline soil since this tropical perennial is averse to it.

In their native habitat, Scarlet Ginger Lily (Hedychium Coccineum) appears during the monsoon season and is dormant due to dry weather. This roughly corresponds to the winter/summer cycle of temperate gardens. Gardeners need to keep this in mind when growing these plants. Ginger expert Tony Schilling said: "Let them adapt to monsoon conditions-warm, humid, and nutritious in summer, cool and dry in winter." If you let ginger lilies become too dry, they will stop blooming. Soil that is moist in summer but does not accumulate water will produce the best flowering results. Although in a dormant state, they prefer a dry environment to avoid root rot in winter.

True to its tropical nature, Scarlet Ginger Lily loves warm and humid temperatures. In fact, if temperatures remain above 50 degrees Fahrenheit all throughout the year, there's a good chance it will flower continuously. That being said, Scarlet Ginger Lily is heartier than it's given credit for and it can survive (though not flower through) some very chilly temperatures. After light frosts, it generally wilts and bounces back and after a hard freeze, it can sometimes grow back from the roots. 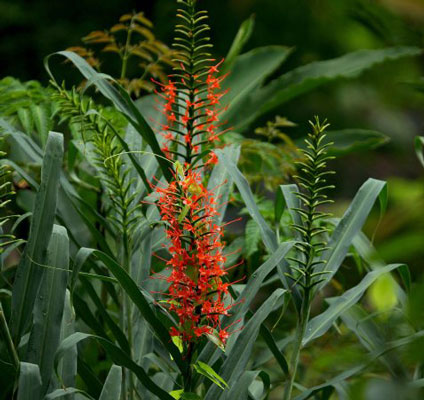 If adding compost or any other organic material is discouraged during planting the cutting, once the Scarlet Ginger Lily is growing, it needs a lot of feeding. Even if you start the plant in rich soil in the garden, as a perennial, it will suck out the nutrients in the soil after only a year or two. Experts recommend using a well-balanced 10-10-10 fertilizer in combination with aged manure and organic compost to keep the plant growing and blooming every year. Apply the fertilizer in the spring before the growing cycle and another time in the summer before flowering. Hold off fertilizing the perennial plant during the fall and winter.

Despite its height and widespread growth, Scarlet Ginger Lily doesn't require much pruning. The tropical plant maintains its elegant shape and posture throughout the years. However, for varieties with repeat blooming, you’ll need to remove the faded flowers to encourage new blooms to emerge.
That said, you should watch where the seeds fall after the flowers get pollinated. Due to its fast growth rate, this plant tends to spread and establish quickly wherever the soil is rich and there's enough moisture. If you worry about the invasiveness of the plant, consider deadheading the flowers and trimming the rhizomes annually.

The U.S. Department of Agriculture's Agricultural Research Service reports that essential oils of some ginger lily species contain insecticidal properties. This explains why these plants are bothered by few insect pests. Although plants like moist soil and many species tolerate wet substrates, waterlogged sites may exacerbate fungal root-rot diseases in some varieties. Plants flower in late summer through autumn, which leaves them safe from butterfly and moth larvae that pupate earlier in the season. Deer may browse on the sweet flowers and succulent stems. 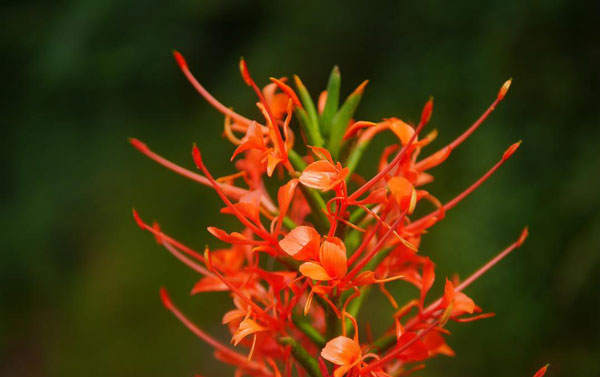 Like its cousin, cooking ginger (Zingiber officinale), Scarlet Ginger Lily has edible roots. However, they don't have much flavor, and just because they are edible does not mean you will like to cook with them. However, the essential oil produced by ginger lily is very delicious. Both buds and open flowers can be used for cooking, just like its other cousins, mioga ginger, Zingiber myoga.

Scarlet Ginger Lily are even fairly hardy too, so in most cases they survive a typical winter with just a topping of mulch, then they'll return with more incredible stems the following spring. But as they're not fully frost hardy they'll need a little bit of extra care to get them off to a good start in their first year.

Do Scarlet Ginger Lily (Hedychium Coccineum) come back every year?

Scarlet Ginger Lily emerge late in spring and require plenty of water until winter when they need to stay dry. In cooler conditions, they go dormant but come back from the rhizomes in the spring.